A bet on Sierra survivors

In climate race, scientists are propagating trees with staying power 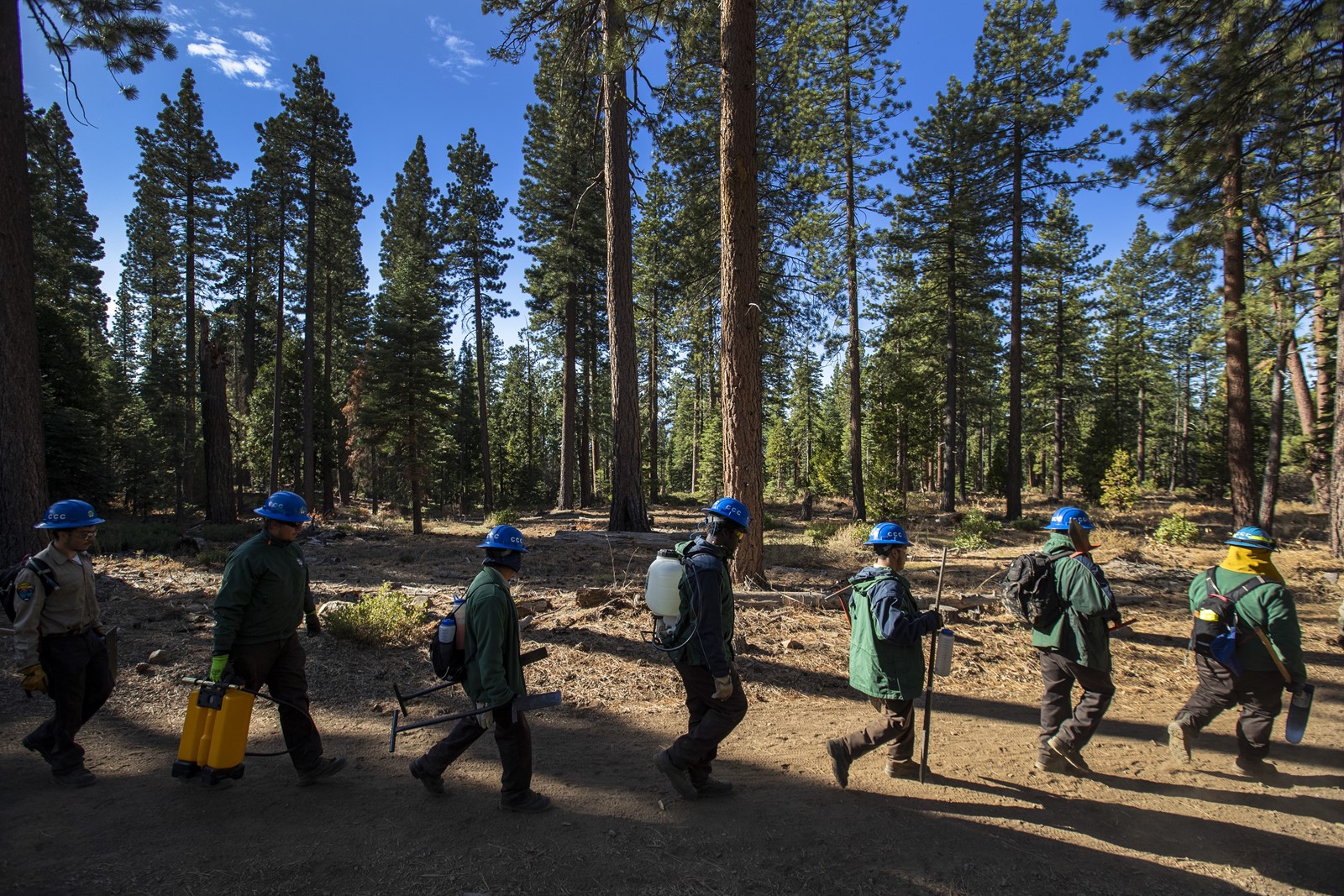 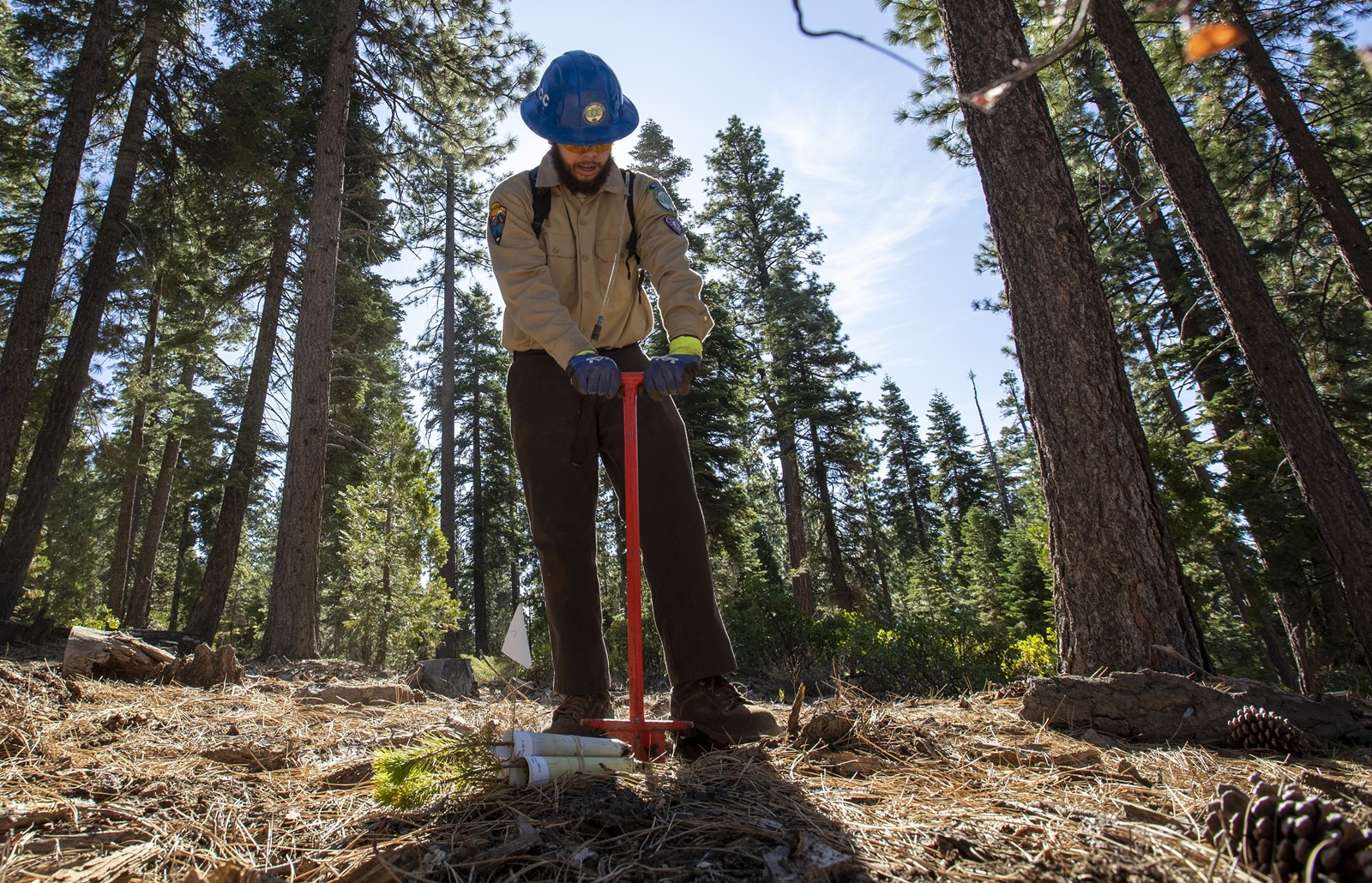 ARTURO GARCIA of the Conservation Corps plants seedlings during the “assisted regeneration” effort. () 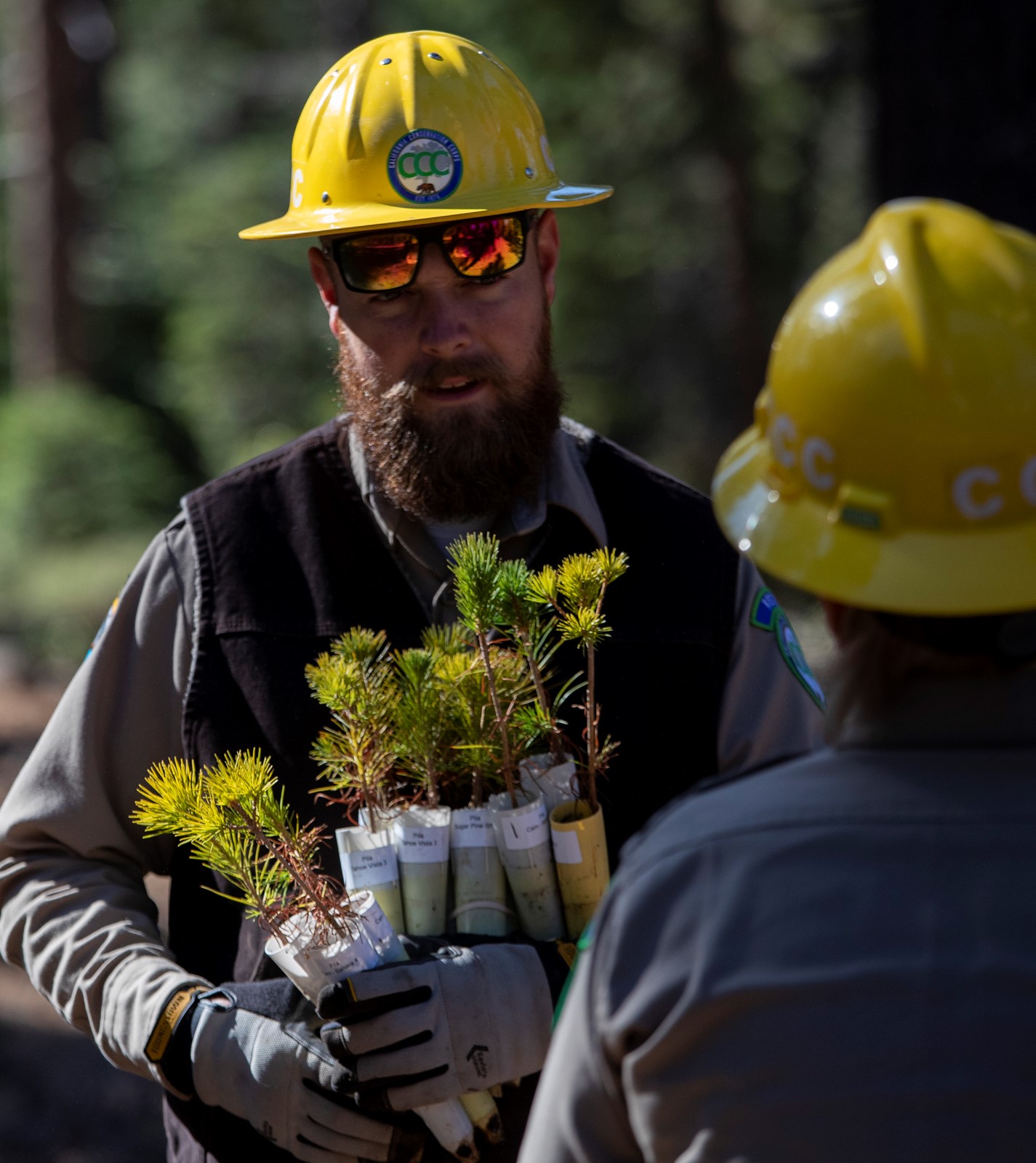 The sugar pine, with its footlong cones and feathery branches that stretch out high above the forest, used to be one of the most common trees standing guard over Lake Tahoe’s clear waters. But drought, bark beetles and climate change have ravaged this beloved conifer, whose population was already diminished by logging, development and other human activities.

From 2012 to 2016, drought and bark beetles killed more than 129 million trees in California, most of them conifers in the Sierra Nevada. On the drier, south-facing slopes on this basin’s north side, sugar pines were hit especially hard as mountain pine beetles attacked the water-starved trees, tunneling through their bark until many of them died.

But it’s not the dead trees that interested Maloney. It’s the survivors.

She wanted to know how they managed to stay healthy and green despite experiencing the same parched conditions that killed their neighbors. She thinks it has to do with innate characteristics that gave them a selective advantage over their peers.

Maloney is now leading an effort to plant thousands of seedlings descended from drought-surviving sugar pines from around Lake Tahoe, hoping they carry genes that make them more resilient to drought, waning snowpack and other effects of global warming.

It’s part of a growing recognition by scientists and land managers that the planet is warming so rapidly they can no longer just restore ecosystems to their previous state, but must step in and accelerate how plants and animals adapt.

Maloney calls her push to replant Tahoe’s forests with the progeny of local drought survivors “assisted regeneration.” It’s a play off the term “assisted migration,” the idea that we should relocate species that are unable to adapt quickly enough to climate change, such as moving animals to higher ground or colder waters. It’s an approach Maloney opposes as fraught with risks and unknown consequences.

Instead, she sees hope in the genetic variation in local populations that allows some trees to survive while others succumb to drought and other environmental threats.

“I think what we’re witnessing is contemporary natural selection. Species have been evolving for millions of years, we’ve just hastened the pace with climatic change and drought,” Maloney explained. “Let nature and evolution in some way run its course, but we can assist in its regeneration. There is promise in these survivors. So let’s work with what we have.”

Other scientists are also working to assist species threatened by the rapidly warming climate.

To try to help dying reefs, scientists at Stanford University are searching South and Western Pacific islands for “super corals” that are resistant to warming oceans and bleaching. Off the coast of Southern California, researchers are toiling to save endangered white abalone brought to the brink of extinction by overfishing, predators and warmer waters. And in Canada, forestry scientists are using the DNA of lodgepole pines to guide decisions about where to plant tree populations that are better suited to the new climate.

“Natural selection is a powerful force and we are all trying to work to speed up adaptation through natural selection,” said Sally Aitken, a professor of forest genetics at the University of British Columbia. “The raw material of natural selection is genetic diversity. Increase diversity and you increase the chances of survival. It’s a way of hedging your bets.”

Aitken refers to this as “assisted gene flow,” the idea of boosting the population of trees already adapted to the changing climate, and says it is broadly aligned with Maloney’s approach.

“The challenges are quite similar as well,” Aitken said. “We’re seeing that our climates up and down the West Coast are warming. We’ve had exceptional droughts, we’ve had exceptional insect outbreaks and, in some cases, introduced diseases that are devastating species. And sugar pine is suffering from all of those.”

John Battles, a professor of forest ecology at UC Berkeley who is not involved in Maloney’s reforestation project, said her approach is “really well founded, it’s immediate and I don’t see any downside.”

But it would be difficult to expand to bigger landscapes and less-visited forests, he said, that don’t have the same cachet as Tahoe.

Maloney, a New Jersey native, ventured to California for graduate school and moved to Lake Tahoe after meeting her husband, a professional snowboarder. Now in her fifties, she has lived and worked in this basin for two decades, trying to understand how its forests are changing with the environment.

She began planning the replanting project while California was still in the throes of an exceptionally dry spell.

After the drought ended, in 2017, she and her team selected 100 of these surviving sugar pines to be mothers to a new generation.

They studied, cored and examined the rings of a portion of those trees and learned they all had at least one thing in common: They used water more efficiently than their deceased neighbors.

That ability can be passed along to the next generation, Maloney said. But they probably have other advantageous traits that she wants to study, such as when they time their spring growth, how massive their roots are and what chemicals they send out from their resin that might attract or repel beetles.

Maloney’s husband, Tom Burt, who also works as a field assistant in her lab, used a giant, pole-mounted slingshot to shake loose the heavy, football-sized pine cones from high up in their branches, collecting them in burlap bags.

Taking seeds from those cones, Maloney’s team raised 10,000 of their offspring, first at a U.S. Forest Service nursery in Placerville, and later at a UC Davis field station in Tahoe City. About 4,000 of the seedlings are being planted starting this fall, in time for the rainy and snowy season ahead, while others will wait until early in the spring. An additional 1,500 will be kept for study, and the rest given to homeowners along the north shore of Tahoe to plant.

By the time planting began in early November, the sugar pine seedlings were about a year and a half old and less than a foot tall. Their needles were bright green, having been dosed up with fertilizers in anticipation of the shock of being transplanted into the grainy mountain soil.

On one recent morning near Kings Beach, UC Davis scientists joined with two crews of the California Conservation Corps to plant hundreds of the seedlings, scooping them from the bed of a truck into planting bags slung over their shoulders.

In groups they hiked to individual planting spots, each selected as having a desirable microclimate, such as protective shade from surrounding trees or a rock, slope or depression that collects runoff near the young trees’ roots. Each location was tracked using GPS and a tablet.

Small teams of helmet-clad corps members moved methodically from spot to flag-marked spot, using sledgehammers, rock bars and hoes to pry and tamp holes in the tough soil. They tapped the popsicle-looking seedlings out of the cone-like pots holding their roots and pressed them in.

In each location, they planted three seedlings from the same mother, arranging them in triangle configuration about a foot or two apart from one another, then squirted them with a burst of water from a backpack-mounted pump.

Sugar pines, named for their sweet, syrupy resin, are some of the biggest trees in the world and can live for hundreds of years and grow more than 200 feet tall. They were thriving more than 150 years ago when John Muir called them the “king of the conifers,” making up about 25% of the forest around Lake Tahoe. Today, they’re down to 5% or less, Maloney said.

The 1859 discovery of the Comstock Lode in Virginia City, Nev., sparked a silver rush and a logging boom, with trees felled and ferried by raft, water flume and rail to supply lumber to the mines. Loggers cut down so many sugar pines, Maloney’s research has found, that in some locations their genetic diversity suffers to this day.

Many have also been killed by white pine blister rust, a fungus introduced from Europe a century ago.

But in recent years, it’s the sight of beetle-killed trees left behind by the drought that has raised new alarm about the health of the forest, said Amy Berry, chief executive of the nonprofit Tahoe Fund, which raised $36,000 for the project.

“The community has an affinity for sugar pines, and a curiosity for why these guys are doing so well and the other ones did not,” she said. Combine that with the history of logging, and it wasn’t difficult to convince people that a new approach was needed.

“With climate change, you can’t go back to how it was, because that’s not how it’s going to be,” she said.

The implications of this work stretch far beyond the forest. Much of the water that supplies California’s cities, farms and rivers comes from melting Sierra Nevada snow, which is being hit with more sunlight as dead trees open up the forest canopy. Experts say that could trigger even earlier runoff, accelerating what is already happening from climate change. As they decay, the killed trees will also contribute to global warming by emitting carbon they once absorbed.

The Sierra Nevada and other western mountain ranges are already feeling the effects of the heat-trapping gases humans spew into the atmosphere. The region is experiencing higher temperatures, more precipitation falling as rain instead of snow and earlier spring runoff, trends that climate scientists expect only to accelerate in the decades to come.

If greenhouse gas emissions continue to rise unabated, temperatures in the Sierra Nevada are projected to heat up by 6 to 10 degrees Fahrenheit on average by the end of the century, according to a state climate assessment published last year. The warming could be limited to half that if global emissions level off by midcentury.

At Lake Tahoe, corps members moved from one planting site to the next on an unusually warm November day, as Maloney circled behind them in a down jacket and canvas field vest. She patted down the soil around the baby trees and spread duff and litter, old decay and bark and pine needles from the forest floor, to protect the soil underneath from drying out.

Adding to their advantages, about one-quarter of the trees Maloney is planting carry a gene resistant to white pine blister rust, a much higher rate than occurs naturally.

“Now they’re on their own. Off to college,” Maloney said. “We wave goodbye.”

Tree plantings don’t typically have high success rates. On Lake Tahoe’s eastern side, where the soil is dry and sandy, only about 16% of transplanted trees survive. But Maloney is hoping these pines’ ancestry will make them hardier than most.

“Fifty percent survival would be amazing,” she said. “Thirty percent, I’ll take. That’s why we plant three — with the hopes that maybe one of them survives.”