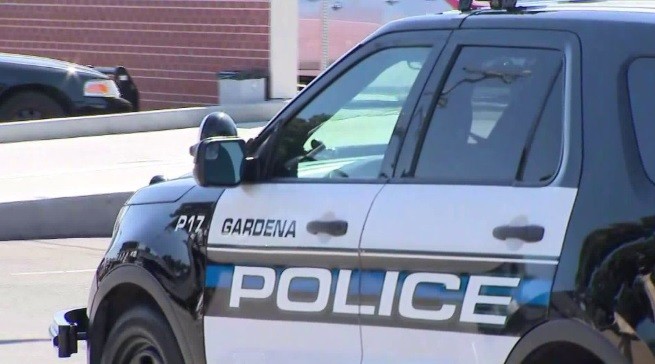 TWO OFFICERS were convicted this week of selling nearly 90 “off roster” guns, some of them to felons. ( KTLA)
PREVIOUS IMAGE

Two Gardena police officers were found guilty Wednesday of buying guns not publicly available and then illegally reselling them, often by using Instagram to find and communicate with potential buyers, authorities said.

Advertising his cache of firearms through the Instagram account @the38superman, Carlos Miguel Fernandez, 44, of Norwalk bought and sold dozens of “off roster” weapons through private party transfers, according to the U.S. attorney’s office for the Central District of California.

The majority of the weapons were .38-caliber Colt handguns available to law enforcement officers but not to the public.

Fernandez’s business partner and fellow officer, Edward Yasushiro Arao, 49, of Eastvale was the chief executive of Ronin Tactical Group, a federal firearms licensee. But, as prosecutors said during trial, Arao used the license as a ploy to circumvent California gun laws.

Federal firearms licensees are prohibited from selling off-roster firearms to the general public in California, meaning Arao could not sell the guns directly from his licensed business to customers, according to court records.

Instead, he transferred the weapons from his business to himself as a law enforcement officer exempt from the California off-roster gun restriction. Aaro then resold the guns in private transfers.

The duo — neither of whom was licensed individually to sell guns — also went to gun shows together, marketing Ronin Tactical Group and @the38superman as business partners, court records show.

For two years beginning in the summer of 2015, the two men bought and sold almost 90 firearms, using their status as police officers to facilitate the purchase and sale of rare and valuable guns, court records show.

Prosecutors said Fernandez frequently messaged buyers who spotted his Instagram posts, including one transaction in which he advertised a “Colt .38 Super LW Commander 100% authentic locked and loaded for sale!” That weapon and others can fetch boutique prices in California.

Fernandez also negotiated and arranged the sale of 10 firearms to Oscar Maravilla Camacho Jr., 36, of Salinas, who had been convicted of a felony. Fernandez spoke directly with Camacho and knew he could not legally buy a gun, court records show.

Arao and Fernandez were found guilty of conspiracy to engage in the business of dealing firearms without a license and of substantive counts of engaging in an unlicensed firearms business. Fernandez also was convicted of an additional conspiracy count — selling firearms to a felon — and of making false statements about the sales on federal firearms licensing paperwork.

Fernandez faces up to 35 years in federal prison, while Arao faces a maximum sentence of 10 years. Their sentencing hearing is scheduled for March 2.

Six other defendants have pleaded guilty to federal criminal charges for distribution of cocaine, conspiracy to dispose of firearms to a felon and making false statements that led to the straw purchase of several firearms, U.S. attorney’s office said.