Canada imposes tariffs of its own

Ottawa responds to Trump’s taxes with duties on $12.6 billion of U.S. products. 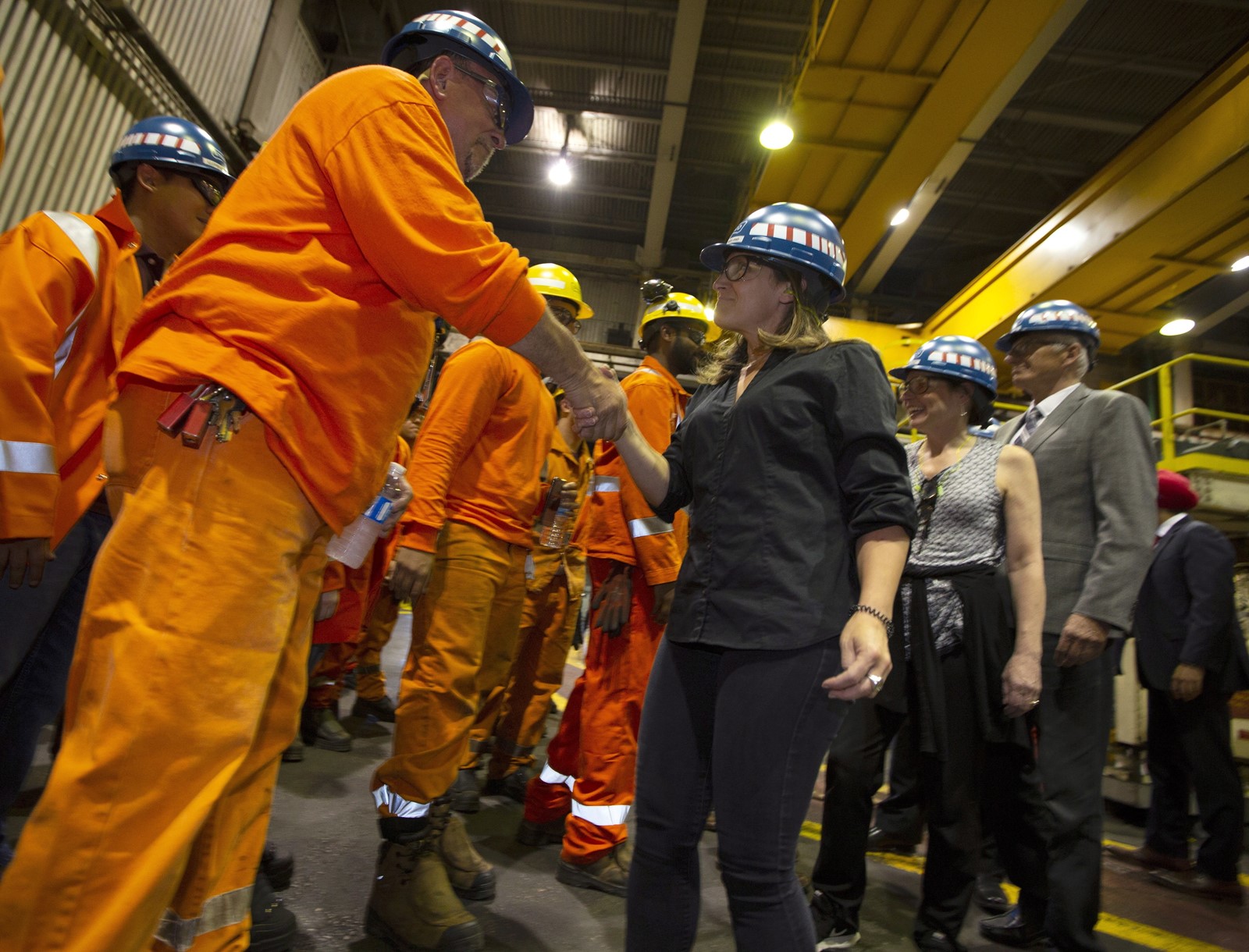 FOREIGN MINISTER Chrystia Freeland visits steelworkers at a Stelco plant in Hamilton, Ontario. In response to U.S. tariffs on Canadian goods, she said, “We will not escalate, and we will not back down.” (Peter Power Canadian Press)
PREVIOUS IMAGE

Canada announced billions of dollars in retaliatory tariffs against the U.S. on Friday in a tit-for-tat response to the Trump administration’s duties on Canadian steel and aluminum.

Prime Minister Justin Trudeau’s government released the final list of items that will be targeted beginning July 1. Some items will be subject to taxes of 10% or 25%.

“We will not escalate, and we will not back down,” Canadian Foreign Minister Chrystia Freeland said.

The taxes on items including ketchup, lawn mowers and motor boats affect $12.6 billion worth of U.S. goods.

“This is a perfectly reciprocal action,” Freeland said. “It is a dollar-for-dollar response.”

She said her government had no other choice and called the tariffs regrettable.

Many of the U.S. products were chosen for their political rather than economic impact. For example, Canada imports just $3 million worth of yogurt from the U.S. annually, and most of it comes from one plant in Wisconsin, the home state of GOP House Speaker Paul D. Ryan. That product will now be hit with a 10% duty.

Another product on the list is whiskey, which comes from Tennessee and Kentucky, the latter of which is the home state of Republican Senate leader Mitch McConnell.

Freeland also said Canada was prepared if President Trump escalates the trade war. “It is absolutely imperative that common sense should prevail,” she said. “Having said that, our approach from Day One of the NAFTA negotiations has been to hope for the best but prepare for the worst.”

Trump has explained the steel and aluminum tariffs by saying imported metals threatened the United States’ national security — a justification that countries rarely use because it can be so easily abused. He also is threatening to impose another national security-based tariff on imported cars, trucks and auto parts. That threat could be a negotiating ploy to restart talks on the North American Free Trade Agreement.

Freeland said there were no grounds for further U.S. tariffs in response to Canada’s actions.

Canadians are particularly worried about auto tariffs because the industry is crucial to their economy. Freeland said such tariffs would be “absurd” because the North American auto industry is highly integrated and parts made in Canada often go to cars made in the U.S. and then sold back to Canadians. “Any trade action is disruptive on both sides of the border,” she said.

Freeland said an “intensive phase” of NAFTA renegotiations will resume quickly after Sunday’s election in Mexico.

“I don’t think we’ll see any reaction from the Trump administration. They are prepared for this,” said Dan Ujczo, a trade lawyer in Columbus, Ohio. “Candidly, the Canadian retaliation is a drop in the bucket compared to the retaliation that we’re going to see from China and elsewhere.”

Ujczo doubts Trump will announce auto tariffs because that would be a “red line for the U.S. Congress” before the midterm election. He said hearings for possible auto tariffs are in late July.

“I don’t think Congress right now is expected to get engaged until after the midterm election. They’ve given the president a long leash and will continue to do so. The auto tariffs would disrupt that. It would change the calculus,” he said.