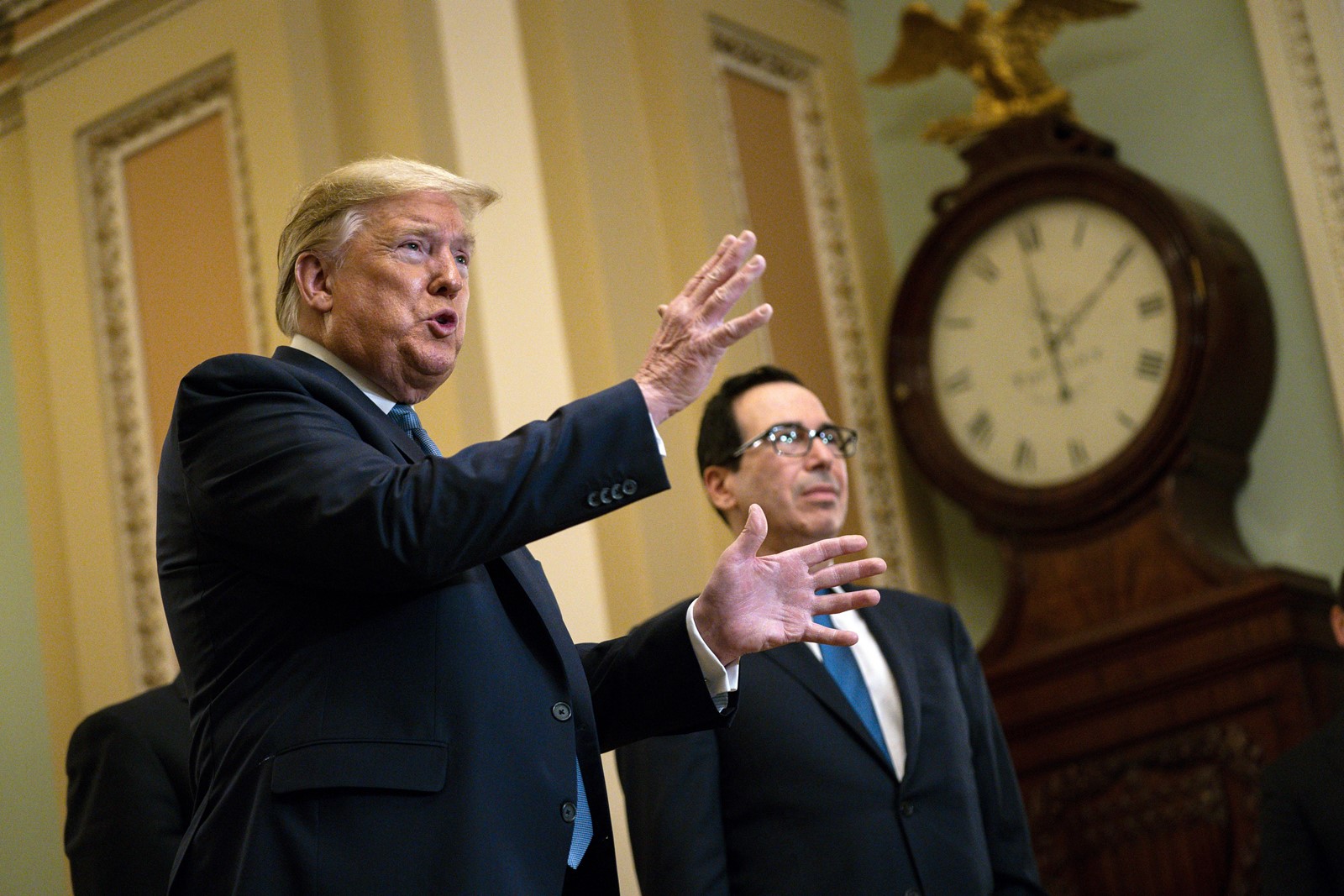 PRESIDENT TRUMP, shown with Treasury Secretary Steven T. Mnuchin, is suggesting a payroll tax cut as a way to help with the economic effects of the coronavirus. But who would be helped the most? (Evan Vucci Associated Press)
PREVIOUS IMAGE

It’s natural for decision-makers grappling with a new crisis to dust off ideas tried in the last one, whether they were good ideas or bad. Here’s a bad idea, unearthed by President Trump from a decade ago: cutting the payroll tax to goose the economy.

A payroll tax cut was part of the arsenal used by President Obama to fight the Great Recession in 2011. It was a bad idea then, and a bad idea now.

In remarks at a news conference Monday, Trump mentioned a payroll tax cut as a possible component of a stimulus plan to counteract a coronavirus-related economic slump. As of this writing, the administration hasn’t released many details. At a meeting with congressional Republicans on Tuesday, according to CNBC, Trump pitched rolling back the payroll tax to 0% through the end of this year, and possibly permanently. Either option would almost certainly die in the Democratic-controlled House.

Regardless of how it’s designed, a payroll tax cut would be poorly targeted, delivering the most help to households least in need. It would have only a diluted impact over time. And it would undermine Social Security, the program most dependent on the payroll tax.

A 2% cut would put only $500 in the pocket of a single parent earning $25,000 a year, former Obama economic advisor Jason Furman observed on Twitter. Hourly workers sent home without pay or laid off because of the economic slowdown would get nothing. That would include the workers most vulnerable to virus quarantines or workplace closures, namely service workers such as waiters and waitresses, hotel staff and office cleaners.

Even for those still receiving paychecks, the payroll tax cut would be spread over the year via weekly or biweekly paychecks, providing a mere 10 bucks or so a week for a low-income household.

“Right now time is of the essence,” Furman tweeted. “I would much rather get people money sooner.”

In 2011, the payroll tax cut was seen by Obama and his aides as an unpalatable choice forced on them by intransigent Republicans in Congress. Obama sought to extend the Making Work Pay tax credit that had been implemented in 2009 and 2010, which provided a maximum of $400 for single persons and $800 for families.

The credit had been pegged to 6.2% of earned income and phased out for singles earning $95,000 or more and couples earning $190,000. Extending the credit to 2011, however, was nixed by the new Republican majority in the House of Representatives.

The payroll tax cut “was the best we could do at the time given the political constraints,” Furman notes. “But it was far from optimal then and would be even further from optimal now.”

Making Work Pay suffered from the same flaw as the payroll tax credit — it was dripped into household budgets only paycheck by paycheck. For that reason, economists have found, its economic effect was muted, especially in comparison with lump-sum stimulus payments made in 2001 and 2008.

The Economic Stimulus Act of 2008, for instance, provided one-time government checks of up to $1,200 for married couples, including $300 per child. The payments were phased out starting with household income of $150,000 (for couples), but even low-income households that owed no federal tax were eligible for at least $300, provided they earned at least $3,000 during the year.

Studies later found that recipients pumped as much as 90% of the payments into the economy within three months. By contrast, former Federal Reserve Gov. Claudia Sahm reports, many taxpayers weren’t even aware that the more gradual benefits of Making Work Pay existed and therefore barely affected their spending.

“Stimulus that is not seen or recognized by individuals is unlikely to affect their sentiment,” Sahm writes.

What’s most unnerving about a payroll tax cut is its potential to undermine Social Security. The program will receive nearly 90% of its $1.1 trillion in revenue this year from the payroll tax, which is levied at a rate of 12.4% of wage income up to $137,700, split evenly between employer and employee.

Using this income stream as a tool to pump stimulus into the economy threatens to erode Social Security’s position as a unique government program with its own revenue stream, a tax dedicated to its upkeep alone. Melding its own revenue with that of the federal government at large facilitates no one’s goals except those who want to see the edifice pulled down.

That includes Trump, who has spoken about cutting “entitlements” such as Social Security and Medicare benefits. He’s only seconding threats made by Republicans such as Senate Majority Leader Mitch McConnell (R-Ky.), who portrayed those programs as the cause of the federal deficit, even after he enacted a multitrillion-dollar tax cut for corporations and the wealthy.

Sen. Joni Ernst (R- Iowa) spoke last year of the necessity of making cuts to Social Security “behind closed doors.” That was an acknowledgment that cuts would be spectacularly unpopular with the public. But chipping away at the program’s bedrock funding under the guise of stimulating the economy is a neat Plan B.

Nor would this be the first time that Republicans proposed raiding Social Security resources for unrelated purposes. Republicans up to and including Ivanka Trump have been pushing a proposal to provide Americans with paid family leave — a benefit that other developed countries have given their citizens for years — but requiring those who take it to repay the cost by delaying their Social Security or accepting a permanent reduction in their benefits. In other words, you could take time off to care for a child or an elderly parent, but only by condemning yourself to a shakier retirement.

Congressional Democrats should know enough to avoid touching Social Security in this crisis. There’s no mention of a payroll tax cut in the coronavirus response plan proposed by House Speaker Nancy Pelosi (D-San Francisco) and Senate Minority Leader Charles E. Schumer (D-N.Y.). It does include, however, mandated paid sick leave, increased unemployment benefits, guaranteed free coronavirus testing and treatment, and a suspension of regulations that would reduce access to food stamps or other safety net programs.

Social Security advocates have been unanimous in condemning any stimulus proposal that would divert Social Security’s revenue stream. (They were opposed when Obama did it too.) Their fear, which is reasonable, is that restoring the full tax would be more difficult than cutting it in the first place, leading to a permanent hole in the program’s income.

Reducing the payroll tax to zero, as Trump reportedly proposed, would have an especially destructive effect on Social Security by placing its funding entirely in the hands of Congress. If you wish to assess the perils of that option, consider how enthusiastic the GOP has been about hobbling programs such as Medicaid, food stamps, heating assistance and Temporary Assistance to Needy Families by slicing their budgets. Take the same step with Social Security, and you can start preparing its tombstone.

“Cutting the payroll tax is not an economic gift no matter how you wrap it,” says Max Richtman, president and chief executive of the National Committee to Preserve Social Security and Medicare. “A payroll tax reduction would provide scant relief to working people while destabilizing the finances of Social Security. There are better ways to cushion the economic impact of the coronavirus than robbing Social Security of much-needed revenue.”

In the Obama administration, the Social Security tax cut was made up, dollar for dollar, out of the federal Treasury. But as was predictable, critics of Social Security used that temporary transfer to argue that the program contributed to the federal deficit. This is a lie, however; by law, Social Security can’t spend more than it takes in from revenues including the payroll tax, interest on its nearly $3 trillion in Treasury securities and income taxes charged on some benefits.

The tax cut and general fund payback were billed originally as a one-time sleight-of-hand trick, but the tax cut ended up being extended twice before it ceased at the end of 2012.

There’s no reason to return to this subterfuge now. That’s especially true given that it doesn’t serve the people who need the help the most, and that it carries the potential to knock a pillar out from under our most important and successful anti-poverty program.