If Congress won’t fund his wall, he says, he will shut down the federal government. 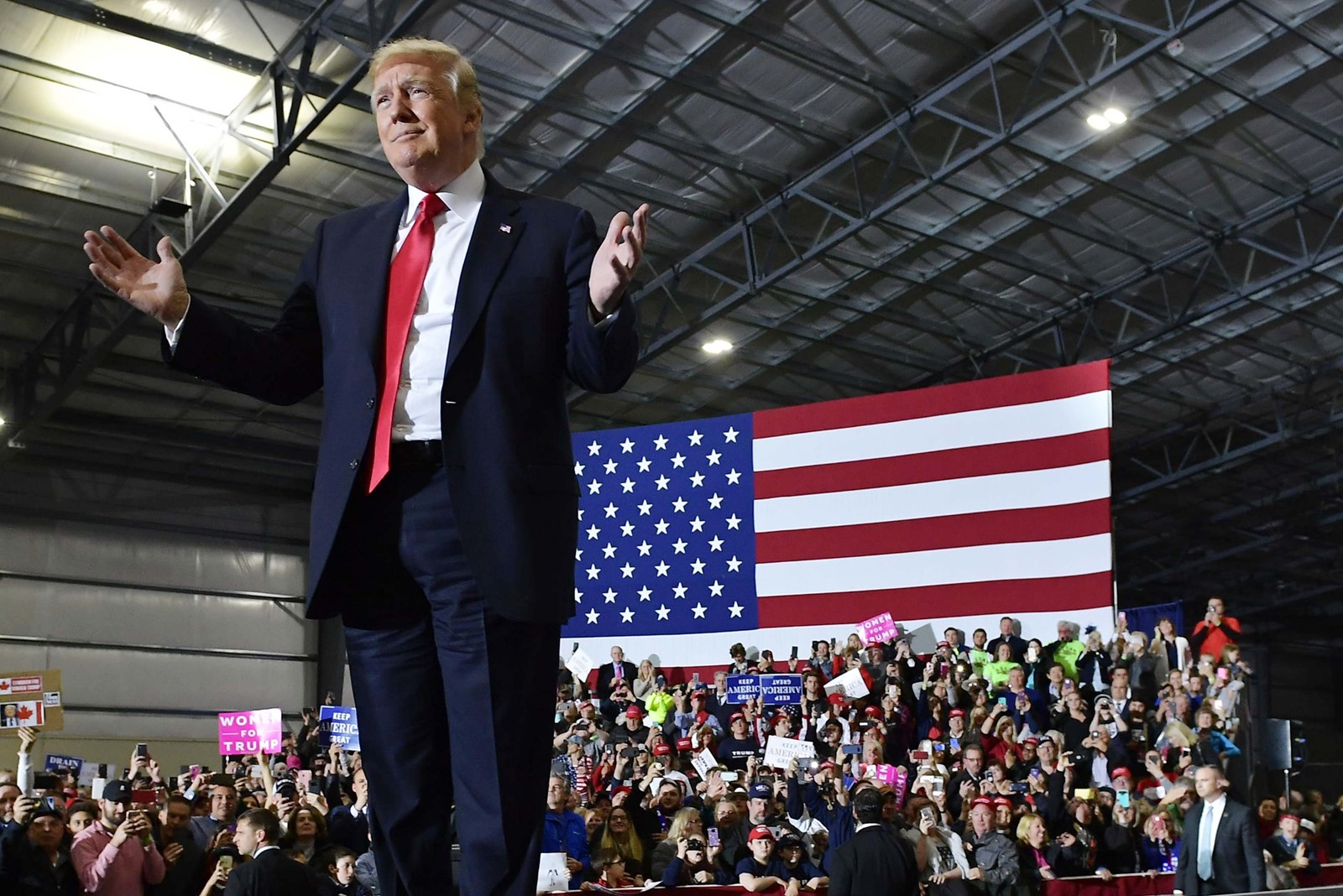 President Trump said Saturday he would shut down the government in September if Congress did not approve enough border funding in next year’s budget to satisfy him, a threat he made after criticizing immigration laws as “pathetic.”

In a speech to animated supporters in a sports arena in Washington Township, Mich., north of Detroit, Trump sketched out his arguments for the 2018 midterm election, mixing praise for his accomplishments and fanning fears of continuing threats to the nation, such as a border “overrun” by immigrants, drugs and murderous gangs.

The president touted a $1.6-billion appropriation in the recent government spending plan as allowing for substantial construction of his promised wall on the U.S.-Mexico border, even though much of the activity to date was begun before his presidency. But at the same time, he insisted the money turned over so far was not enough.

“We have to have borders and we have to have them fast … and we need the wall,” he said, then referred to the fall spending bill: “We come up again on Sept. 28, and if we don’t get border security, we have no choice; we’ll close down the country because we need border security.”

The president did not specify the amount of funding he thought necessary, although earlier administration estimates have cited a level north of $20 billion. He did not criticize Mexico nor repeat his campaign promise that Mexico would pay for the wall.

Trump’s speech — made under the auspices of his campaign — marked a return to one of the high points of his surprise 2016 victory: his win in Michigan, a state that for several presidential election cycles had gone to Democrats.

The county in which he spoke — Macomb — was the birthplace of the so-called Reagan Democrats, who helped usher in another Republican president 36 years before they and their ideological descendants pulled the state toward Trump.

But the night was also a pointed repudiation of the “swamp” that he had campaigned so fiercely against. His speech in Washington began at the same time residents of another Washington — in the District of Columbia — were gathering at a fancy hotel for the White House Correspondents’ Assn. dinner. Trump was invited to the dinner but for the second year spurned it to hold a campaign rally.

Within the first minute of his speech, Trump made the contrast between the tuxedoed D.C. denizens and his visit with voters in an area that has been buffeted by economic troubles.

“You may have heard I was invited to another event tonight, the White House correspondents’ dinner,” he said, drawing boisterous boos from his audience. “But I’d much rather be in Washington, Mich., than Washington, D.C., that I can tell you.”

Compared with a typical Trump speech, however, the level of animus directed at the news media was minimal. He spent his time instead reminding voters of the gains he said had been made by his administration.

He repeatedly called attention to the December passage of a tax cut plan, the easing of regulations and the appointment of numerous conservative judges, including Supreme Court Justice Neil M. Gorsuch.

He also claimed credit for a revived economy, a growing military, for all but eviscerating President Obama’s healthcare plan, and for captaining a forceful foreign policy. “We’re not the patsies anymore; we’re not the pushovers anymore,” he said.

Not meaning to be “braggadocious” but factual, he said, “nobody in the first year in office has done what we’ve done. It’s not me. It’s we.”

But the president also acknowledged some complications spawned by his agenda. As he has before, he suggested that farmers who are threatened by the end of the North American Free Trade Agreement were “patriots” suffering for their country — an admission that the trade deal he has long decried was beneficial to some of his supporters.

“There may be a little pain for a little while,” he said, for the people he called “my farmers.”

But, he added, lowering the nation’s trade deficit would eventually prove worthwhile. “Short-term you may have to take some problems; long-term you’re going to be so happy.”

Trump also acknowledged the downside of his crackdown on immigration, both illegal and legal. He told the crowd — in a passage that drew less applause than most of his speech — that he would let in immigrants under certain visas to supplement American workers.

“We’re going to let them in because you need them,” he said.

“We need people to be able to come into our country, do their jobs, help you on the farms and then they leave,” he said. “Guest workers: Don’t we agree we have to have them?”

The correspondents’ dinner that Trump skipped has a troubled history for the president: In 2011, when Trump attended as a guest, President Obama mocked him mercilessly for his false claims that Obama was not a U.S. citizen.

Trump may have had the last laugh, however. Some close to him said that humiliation was part of what drove Trump into the 2016 campaign that he won with surprise victories in states like the one in which he spoke Saturday.