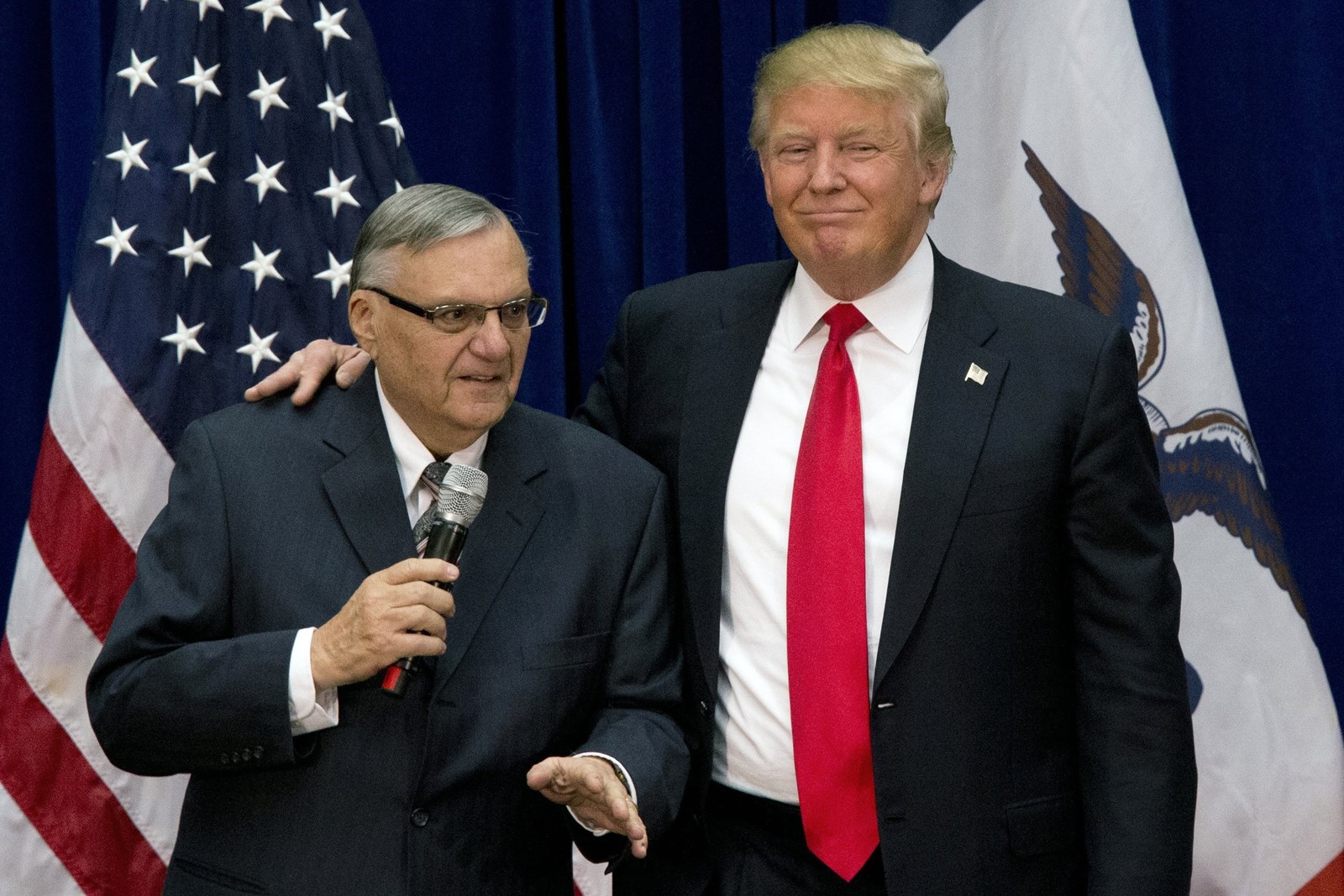 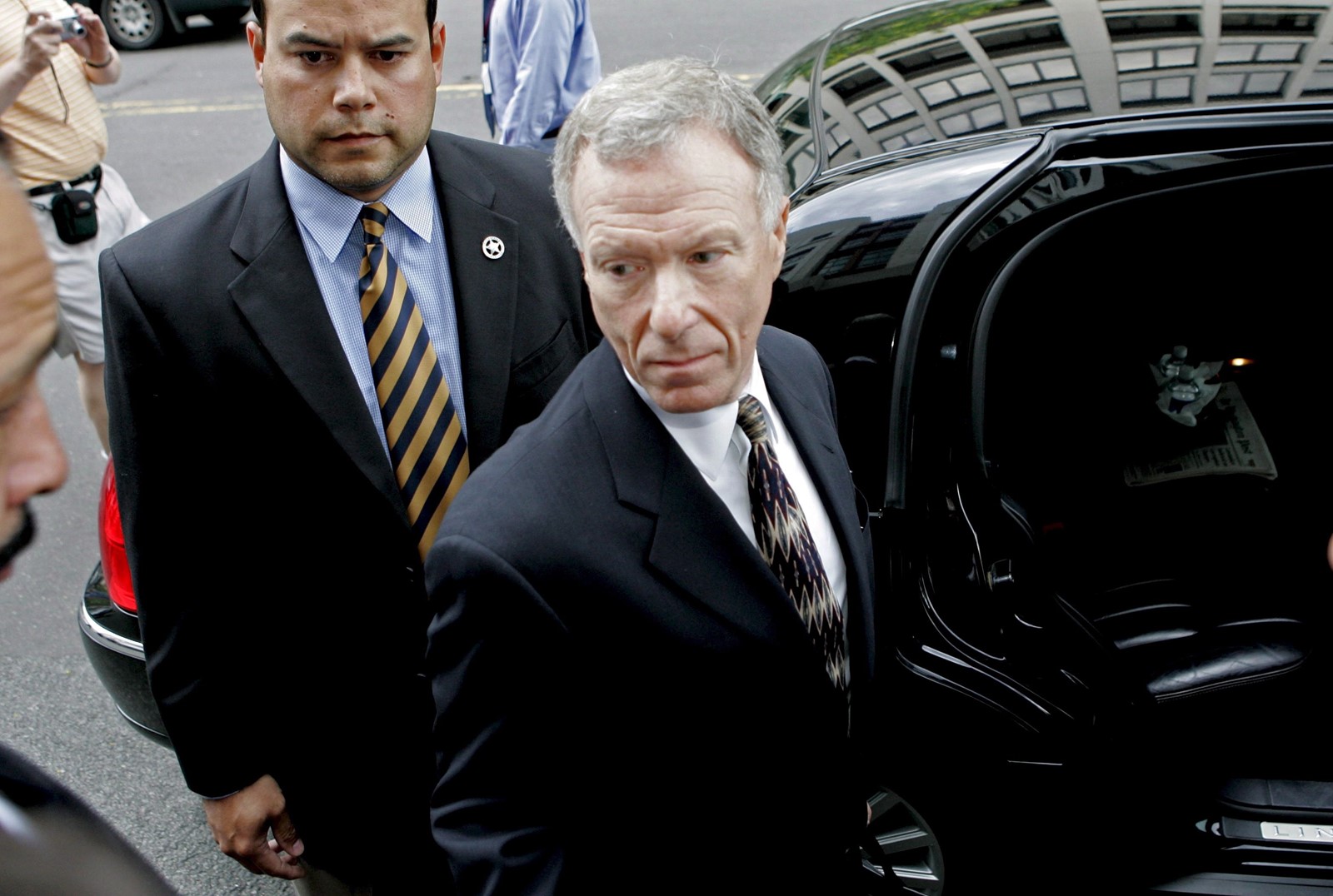 Arpaio, the former sheriff of Maricopa County, Ariz., spent years in the national spotlight for erecting a tent city for inmates and condoning mistreatment of suspects.

During Trump’s campaign for president, Arpaio became one of his earliest and more prominent supporters, urging voters to support his position on illegal immigration.

In 2017, he was convicted of criminal contempt for violating a federal court order to stop his deputies from racially profiling Latinos. He faced up to six months in jail, but Trump issued a pardon before he could be sentenced.

Historians consider Arpaio’s pardon one of the most controversial ever issued. It is rare for a person held in contempt of court to be granted executive clemency.

“It was a very controversial pardon because it undermines the court system,” Lichtman said.

Saucier, a sailor, was convicted after taking pictures of a classified propulsion system on a Navy submarine; his sentence included a year in prison.

Saucier had argued that his actions were no worse than Hillary Clinton’s use of a personal email server when she was secretary of State. That defense caught Trump’s attention, and he used Saucier’s example repeatedly on the campaign trail in his denunciation of his Democratic opponent.

Trump pardoned Saucier in March 2018, tweeting, “Congratulations to Kristian Saucier, a man who has served proudly in the Navy, on your newly found Freedom. Now you can go out and have the life you deserve!”

Trump said Libby, the former chief of staff for Vice President Dick Cheney, was treated “unfairly” by a special counsel.

Critics questioned the timing of the pardon, which came in April 2018, as the investigation led by special counsel Robert S. Mueller III into Russian meddling in the 2016 election was escalating. Trump was already calling the inquiry a “witch hunt.”

Libby was sentenced to 30 months in prison after he was convicted in 2007 of obstruction of justice, making false statements and perjury. It was the result of an investigation into the 2003 leak that revealed the identity of CIA officer Valerie Plame.

“Hopefully, this full pardon will help rectify a very sad portion of his life,” Trump said in a statement.

Trump issued a rare posthumous pardon to the African American boxer, saying his conviction in 1913 came during a time of “tremendous racial tension” in the U.S.

Johnson, the first black heavyweight champion in the early 1900s, was found guilty by an all-white jury of violating the Mann Act, which made it illegal to transport women or girls across state lines for “immoral” purposes. He was sentenced to a year and a day in prison and fined $1,000.

Trump announced the pardon in May 2018. Johnson’s family as well as actor Sylvester Stallone of “Rocky” fame, who advocated for the pardon, were by the president’s side.

“That pardon, you could argue, is correcting a miscarriage of justice,” said Andrew Rudalevige, professor of government at Bowdoin College in Maine.

Conservative provocateur D’Souza pleaded guilty to campaign fraud in 2014 and was sentenced to five years’ probation, community service and a $30,000 fine.

The White House said after the May 2018 pardon: “D’Souza was, in the president’s opinion, a victim of selective prosecution for violations of campaign finance laws.”

After the pardon, D’Souza tweeted, “Obama & his stooges tried to extinguish my American dream & destroy my faith in America. Thank you @realDonaldTrump for fully restoring both.”

Rudalevige said D’Souza falls within a group whose pardons appear to be based on support of the president.

“He was pardoned, as far as anybody can tell, for being a loud Trump supporter on Twitter,” he said.

The Hammonds, father and son, were sentenced to five years in prison for arson. TheOregon ranchers started a fire in 2001 on federal land to cover up illegal hunting, prosecutors said.

The sentences spurred protests over government management of federal land. An armed group of ranchers and right-wing anti-government activists occupied Malheur National Wildlife Refuge in Oregon in a standoff that lasted 41 days.

Trump pardoned the Hammonds in July 2018. A former U.S. attorney accused the president of catering to right-wing activists.

Lichtman said the Hammonds were seen as “symbols of resistance to the so-called deep state that Trump is always railing about.”

Former Army 1st Lt. Behenna was convicted in 2009 in a military court of unpremeditated murder of an Iraqi prisoner. Behenna had taken the detainee into the Iraqi desert, stripped him naked and interrogated him before shooting him, prosecutors said.

In a pardon statement, the White House said Behenna garnered support among Oklahoma and military officials, some of whom supported his claim of self-defense. The statement also mentioned that an Army panel had reduced his sentence from 25 to 15 years and paroled him. Trump pardoned Behenna in May.

“A jury of [Behenna’s] military peers did not think that was justified by the exigencies of the battlefield,” Rudalevige said.

Nolan, a former Republican state legislator in California, pleaded guilty in the 1990s to one count of racketeering after he was secretly recorded accepting a check from an undercover FBI agent in the “Shrimpscam” sting.

He was sentenced to 33 months in prison and fined $10,000. Conservatives had pushed for Nolan’s clemency.The White House cited Nolan’s advocacy for criminal justice reform in granting him clemencyin May.

Black, a former media magnate, was pardoned the same day as Nolan. He was convicted in 2007 of defrauding shareholders of his firm Hollinger International Inc. and received a revised sentence of 42 months.

Last year, he published the book “Donald J. Trump: A President Like No Other.”

In it, he writes, “Like the country he represents, Donald Trump possesses the optimism to persevere and succeed, the confidence to affront tradition and convention, a genius for spectacle, and a firm belief in common sense and the common man.”

The White House’s statement on the pardon cites Black’s biographies of Nixon and Franklin D. Roosevelt but makes no mention of his book on Trump. It also points to support from former Secretary of State Henry Kissinger, English singer Elton John and conservative radio talk-show host Rush Limbaugh.

Rudalevige said Trump would not be the first president to issue pardons to appease a part of his base but that Black’s pardon seemed out of place.

“The pardon power should not be something that’s used for the personal benefit of the president,” Rudalevige said. “Even though it’s a legitimate constitutional power, a president could legitimately be impeached for the abuse of that power.”