For Mexico and other countries awaiting immunization, the U.S. is taking a back seat. 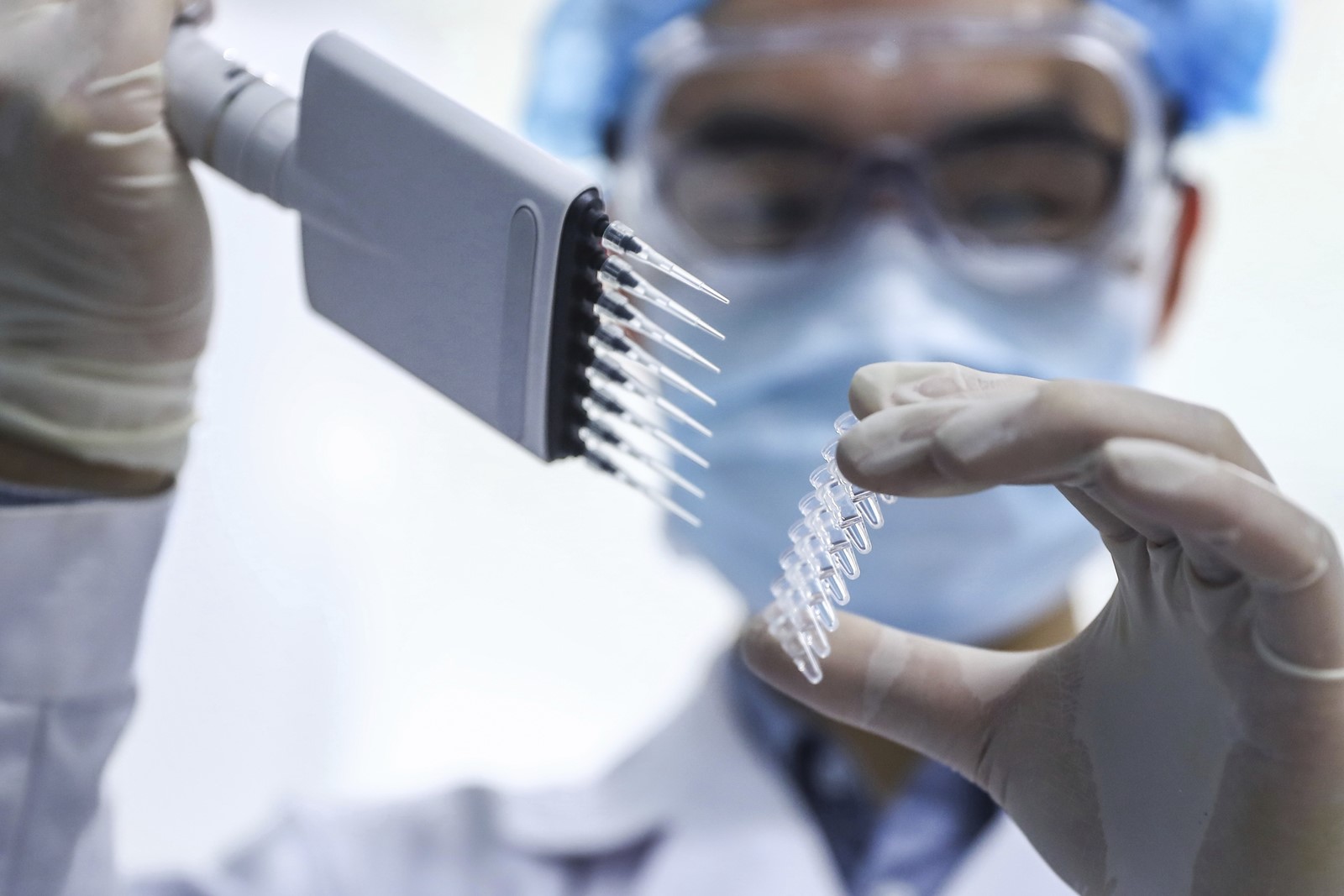 A POTENTIAL VACCINE against the coronavirus is tested at SinoPharm in Beijing. China and Russia are cutting deals to distribute vaccines in developing countries as a means to expand their global influence. (Zhang Yuwei Xinhua News Agency)
PREVIOUS IMAGE

Mexico has long looked to its most important ally — the United States — in times of crisis, and its diplomatic campaign for a coronavirus vaccine is no exception.

At least three U.S. pharmaceutical companies have agreements with the Mexican government that could reduce the time its citizens will have to wait for vaccinations.

But officials in Mexico and many other developing countries are well aware that the United States is consumed by its own coronavirus crisis and led by a president who preaches “America first.”

And so they have turned to two other superpowers that are more than willing to fill the void: China and Russia.

The governments of both countries have been marketing unproven vaccines around the world, seizing on the likelihood of a global bottleneck to deepen ties abroad and expand their influence at a time when the U.S. has pulled out of multiple international agreements and shunned the World Health Organization.

Russia’s trade ministry said it has received interest from more than 20 countries for a total of more than 1 billion doses. Meanwhile, the Chinese government is cutting its own deals and offering enticements, including a $1-billion loan program to help Latin American and Caribbean nations purchase its vaccines.

Both China and Russia have plans to supply vaccines to Mexico.

“We are not putting all our eggs in one basket,” said Mexico’s foreign secretary, Marcelo Ebrard.

There are 7.8 billion people in the world. Ending the pandemic with a vaccine could require immunizing 80% of them. Given that many of the vaccines now in development are expected to require two shots, that could mean more than 12 billion doses.

Even with manufacturing capacity ramping up, it could take until 2024 to inoculate the world, pharmaceutical executives say.

The wealthiest nations will almost certainly be first in line.

After antiretroviral therapies for suppressing HIV became widely available in the United States and Europe in 1997, it took almost seven years — and millions of deaths — for them to be distributed across Africa.

When the H1N1 pandemic was erupting in the spring of 2009, the U.S. and other wealthy countries paid to reserve virtually the entire supply of potential vaccines — agreeing to release 10% of it to developing nations only after it became clear months later that the virus was less deadly than originally thought.

Today, the planet seems just as unlikely to operate as one big, happy family.

When the COVID-19 pandemic struck, more than 70 countries seized control of medical supplies to prevent them from being shared or sold abroad. After the antiviral drug remdesivir showed promise, the U.S. bought 90% of the global supply.

Already, wealthy countries that make up just 13% of the global population have pre-purchased more than half of the vaccines that major companies have pledged to produce, according to the aid organization Oxfam.

The U.S. pre-purchased 800 million doses of various experimental vaccines in a bet that at least one will prove safe and effective.

Operation Warp Speed — the multibillion-dollar U.S. government partnership with several private companies to develop, manufacture and distribute vaccines — may eventually benefit poorer countries, but it is unclear when.

Peter Marks, a senior Food and Drug Administration official, said in June that the allocation of U.S. vaccines is analogous to the use of overhead oxygen masks on a depressurizing plane: Help yourself before helping others.

The first is to wait it out. Covax, a global partnership co-led by the WHO, plans to pool vaccines and make them available in low-income countries for healthcare workers and people at high risk of dying from the virus. The effort is lagging because the White House has refused to pay in to the fund, saying in September that it would not be “constrained by multilateral organizations influenced by the corrupt World Health Organization and China.”

Even if the effort meets its goals, the countries that benefit will have to find more vaccines elsewhere. For example, the WHO anticipates that all of Africa will receive about 220 million doses but that ideally it needs more than 1 billion.

Thomas J. Bollyky, director of the global health program at the Council on Foreign Relations, called Covax a “heroic effort” that is “swimming against the tide of history.”

The second option is vaccine diplomacy. That’s where China and Russia come in.

China has been on a tear in recent years to expand its global influence, funding oil pipelines, maritime networks and other infrastructure projects that could eventually stretch across more than 100 countries.

The pandemic — and the worldwide need for a vaccine — presented a unique opportunity to exercise soft power.

But China had a problem: Because it has managed to control its own coronavirus outbreak through strict quarantine orders and other measures, the companies developing half a dozen vaccines lacked the right conditions to run clinical trials.

Many other countries with few prospects of securing vaccines by other means were happy to oblige.

Chinese trials are now underway — or expected to start soon — in at least a dozen countries, including Mexico, Brazil, Argentina, Peru, Morocco, Indonesia and Bahrain.

In return for 9,000 volunteer test subjects, Brazil has negotiated the right to buy some 120 million doses of the vaccine being developed by the Chinese company Sinovac, possibly starting as soon as December. The deal also calls for Brazil — which has vast experience manufacturing pharmaceuticals — to help produce the vaccine it will use.

Testing abroad could help China build international confidence in its medical research establishment, which has been racked by vaccine safety scandals.

Chinese officials have announced that they are not planning widespread vaccinations of their own citizens. More important to them is being able to vaccinate people in Cambodia, Laos, Burma, Thailand, the Philippines and Vietnam in hopes of recruiting allies and marshaling support for China’s overseas agenda, including claims over disputed territory in the South China Sea.

It is notable that Pakistan — which has been promised enough vaccines for about a fifth of the population — has refrained from condemning China for its treatment of Pakistani Uighurs.

In Russia, meanwhile, medical diplomacy dates to the days of the Cold War, when the Soviet Union exported massive amounts of cheap vaccines to the developing world.

Early in the COVID-19 pandemic, the Russian government sent thousands of masks and ventilators to Italy in shipments decorated with hearts: “From Russia With Love.”

If there were any doubts that Russia sees vaccine development as the new international space race, they were quelled when the country announced the name of its new vaccine: Sputnik V. The first of three vaccines that Russia expects to bring to market, it was developed at the government’s Gamaleya Research Institute of Epidemiology and Microbiology and approved after testing in just 76 volunteers.

Russian President Vladimir Putin announced that his daughter had taken the vaccine, a nod to the 1950s Russian researchers who inoculated their own children against smallpox.

The vaccine was also tested on volunteer soldiers and is now undergoing further testing in at least 30,000 people.

The United Arab Emirates — which has enrolled at least 50,000 people in Russian and Chinese clinical trials — has already begun issuing emergency authorizations to start vaccinations.

As for the United States, it is no stranger to vaccine diplomacy.

In the 1970s, it helped fund mass inoculation programs to eradicate smallpox in South America, Asia and Africa. Under the Obama administration, the U.S. Centers for Disease Control and Prevention deployed hundreds of workers around the world in an effort to finally wipe out polio.

“Those white coats are the world’s best ambassadors,” said Dr. William Schaffner, an infectious disease expert at Vanderbilt University. “It sounds corny, but it works.”

When it comes to the coronavirus, the Trump administration appears to be breaking with that tradition.

He said that silence has been a gift to China and Russia: “The U.S. is handing them the opportunity.”

In Mexico, which has budgeted $1.7 billion for vaccine purchases, the dealmaking is well underway. The Chinese company CanSino Biologics plans to conduct Phase 3 clinical trials there and is now under contract to supply shots for 35 million people. The Russian government said at least 16 million Mexicans could receive Sputnik V. And the British company AstraZeneca has agreed to supply vaccines for 39 million more people — as Mexican authorities angle to make the country a hub for distribution of the company’s vaccine throughout Latin America.

Mexico has also signed a commitment to Covax to buy vaccines for at least 25 million people.

For the moment, the U.S. — its biggest trading partner — remains a smaller player in Mexico’s vaccine strategy

A deal with the U.S. pharmaceutical giant Pfizer is expected to supply shots for up to 17 million people, and U.S. companies Johnson & Johnson and Novavax are planning trials in Mexico that would assure the country faster access to those vaccines if approved.

“All this is obviously our bet that Mexico is in the front row of access,” said Martha Delgado, the country’s undersecretary for multilateral affairs at the Foreign Secretariat, who is coordinating the vaccine search. “That we will not be left behind.”