Voters fed up on homelessness

Most of those polled cite it as a serious problem. Some see it as

a quality-of-life issue. Others worry it could happen to them. 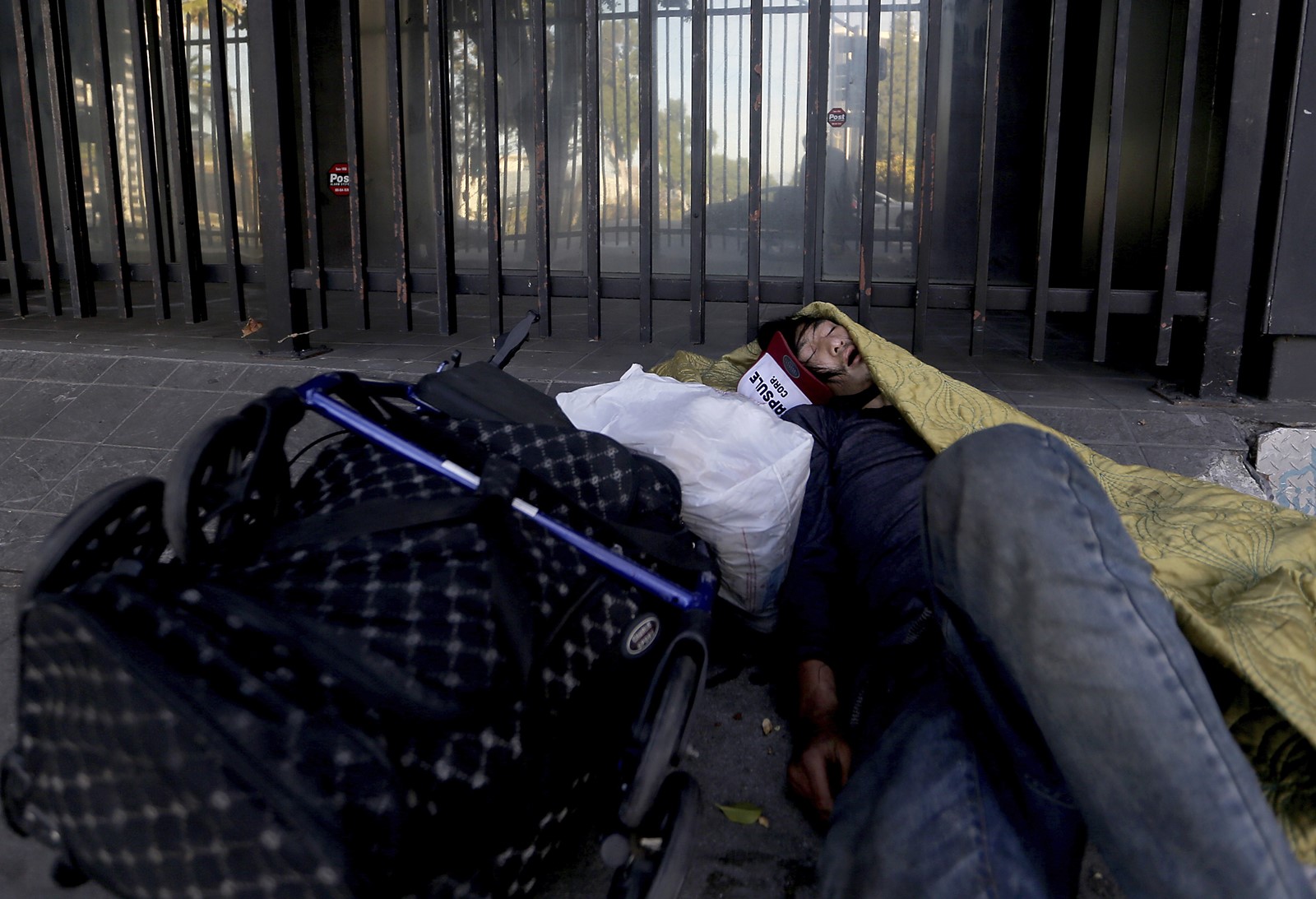 Amid deep frustration over widespread, visible homelessness, Los Angeles voters want the government to act faster and focus on shelter for people living in the streets, even if those efforts are short-term and fall short of permanent housing, a new poll of county voters shows.

Most voters continue to express empathy for homeless people but also impatience and disappointment with the region’s leadership, according to the poll, conducted by the Los Angeles Business Council Institute in cooperation with The Times.

A key finding: Nearly 4 in 10 voters said that homeless people in their neighborhood made them feel significantly unsafe.

Asked to describe their concerns in their own words, voters repeatedly mentioned urine and feces in the streets, a rising sense of disorder, and concern for their children.

“I didn’t feel safe over there, especially raising my children,” said Amber Morino, a 35-year-old student and mother of seven who took part in a focus group done in conjunction with the poll. She moved this year to the San Fernando Valley from a home in Mar Vista after a camper caught fire near the park where her kids played.

“I am also considering moving out of the state because it’s so bad,” she added. “Like, I just feel like every corner I turn here there are encampments — campers. It’s just terrible.”

Just over 1 in 5 voters said they had seriously considered moving because of homelessness in their neighborhoods.

For many Los Angeles residents, a fear of personally falling into homelessness or knowing someone who will looms large.

Almost 4 in 10 voters said they either have experienced homelessness or housing insecurity in the last year (11%) or know someone who has (25%).

That rises to almost half of Black voters, reflecting the racial inequity of the homeless population in Los Angeles.

The poll, which surveyed 906 registered voters countywide and has a margin of error of 3.3 percentage points, was designed to update a similar survey conducted by the Los Angeles Business Council and The Times two years ago. The new poll’s findings are broadly consistent with several private polls done in recent months by candidates, advocacy groups and others involved in the region’s debates over how to solve its persistent homelessness problem.

Despite two years of disruption caused by the COVID-19 pandemic, many attitudes about homelessness have not changed.

One that appears to have shifted involves the trade-off between spending money on temporary shelter or long-term housing.

Asked whether officials should focus on “short-term shelter sites” or “long-term housing for homeless people with services,” voters by 57%-30% opted for the short-term solutions. In a similarly worded question two years ago, opinions were nearly evenly divided.

Many advocates for homeless people cite research that shows people are more likely to stay off the street if they are permanently housed and provided with services to help address physical and psychological ailments. This sort of housing is in short supply in Los Angeles, and although more is being built, progress has been slow and expensive.

That has led many to say that the city and county cannot wait for enough such housing to be built and must proceed quickly with interventions that get people off the street and into shelters faster.

One thing that stayed constant is that homelessness ranks as the top problem facing the region, with 94% of voters viewing homelessness as a serious or very serious problem.

That’s virtually identical to the level of concern two years ago despite hundreds of millions of dollars of state and federal money that the city and county have spent to deal with homelessness.

Officials have used the money to fund and support thousands of new units of interim housing.

The added capacity has helped support efforts — predominantly by city officials — to clear large encampments in parks and at other city landmarkssuch as the Venice boardwalk.

But the region’s voters overwhelmingly said homelessness has gotten worse — 79% said so, compared with 7% who said the situation has improved and 13% who said it has stayed the same.

It’s hard to know the true picture of how many people are homeless currently. The 2020 point-in-time count, mandated by the federal government, found that 66,000 people in the county were homeless. That occurred in January, before the COVID-19 pandemic had come into full force. The 2021 count was canceled. Most experts in the region expect the number to jump when the count is conducted again this winter.

“I think it reflects how debilitated we all feel,” Mayor Eric Garcetti said in an interview about the poll results.

“How many years and how many new tents — even as we have successes — can we see in a neighborhood before we feel that we need some short-term places to stabilize people that are on the street?”

The widespread concern — and the deep frustration on the part of many voters — suggests that homelessness will be a top issue for candidates in next year’s elections. L.A. residents will pick a new mayor for the first time in eight years, and voters countywide will choose members of the Board of Supervisors.

Lawrence “Drew” Whitlock, a 66-year-old painting contractor who lives in Playa del Rey and was another of the focus group participants, expressed a frustration many voters feel: His truck and his home have been burglarized, and he had a knife pulled on him by a homeless person recently, he said.

“I don’t resent them. I want the best for them,” he said of homeless people in his neighborhood. “I would do whatever I can reasonably to help. But it’s interfering with the quality of my life.”

Morino, the student and mom who left Mar Vista, is a former foster care youth who now has four foster children along with two kids she’s adopted and a newborn. She said the children she fostered had been homeless, and she has experienced housing insecurity as well. For her, homelessness is a “pandemic” that the government has failed to even attempt to cure — one she has seen firsthand.

“A lot of the mayors, governors, city people, they always say, ‘Vote for me, we’re going to get in the office and get the job done. We’re going to clean up this homeless problem, and you’re going to pay this amount of taxes,’ ” she said.

“It’s like nothing has been done. The taxes have increased.... Our politicians need to step up and take some accountability for what’s happening in our streets.”

Candidates are keenly aware that homelessness will be top of mind, staking out positions on the issue and, in some cases, preparing ballot measures to highlight their stands.

Almost three-fourths of respondents said homelessness should be the most important or a very strong priority for newly elected or reelected officials.

“It’s not just that people aren’t happy with their leaders. It’s that they don’t really even know what they’re doing or who the leader is, who is supposed to do something about this crisis,” said Aileen Cardona-Arroyo, a senior analyst at Hart Research.

Voters are “shaken and upset” and many are “close to the boiling point,” said veteran pollster Peter Hart, who helped oversee the survey. “There’s not a lot of optimism.”

Even with the anger surrounding the crisis, respondents to the poll appear to have a clear picture of what’s driving thousands of Angelenos to sleep on the streets and who is responsible for addressing the crisis.

Just over 60% of respondents said the primary cause of homelessness was either a lack of affordable housing and wages that aren’t keeping up with the cost of living (35%) or a failure to provide access to healthcare for mental and physical illness (27%).

Just 18% said the primary cause of homelessness was a homeless person’s own actions and decisions.

How a voter responded to that question strongly correlated with other views in the survey. Those who blame broad, societal problems for homelessness are significantly more likely to support government action to combat it.

Black and Latino voters were most likely to cite the cost of housing and low wages as a prime cause of homelessness. White voters more often cited healthcare. People who identified themselves as conservatives were more likely to point to an individual’s own decisions.

Voters also expressed skepticism about clearing encampments without offering people a place to go, such as a hotel room or other temporary shelter, and services such as medical care.

A majority, 64%, said that when an encampment is cleared, homeless people are most likely to move to other encampments in the region rather than find shelter or permanent housing (19%), or leave the region (10%).

Recent efforts to clear encampments have had varying degrees of success in getting people into shelter or housing. Outreach officials have said their ability to get people off the street hinges on the availability of beds in shelters and hotel rooms, which the city and county rented for homeless people at the outset of the pandemic.

Fifty-two percent of voters said providing services to individuals living in encampments should be a higher priority for officials than clearing encampments out of parks and neighborhoods, favored as the top priority by 39%.

On that question, as with several others, a significant difference exists along racial and ethnic lines.

Over the last two years, the city has poured tens of millions of dollars into a range of interim housing solutions — some of which are not cheap — and moved forward on designating areas of the city where homeless people cannot sit, lie or sleep outdoors.

Theo Henderson, an activist and creator of the podcast “We the Unhoused,” said he thinks voters’ desire for quick solutions stems partially from their preference to sweep homelessness out of sight. He was encouraged to hear that the poll found that voters felt that broader structural forces were the main reason individuals became homeless.

His hope was that people would take this knowledge and advocate for less money to be spent on the Los Angeles Police Department and more to be spent on things that help get people out of homelessness.

“They don’t want to see poverty,” he said of many voters. “They need to understand that these problems have been long in the making.”