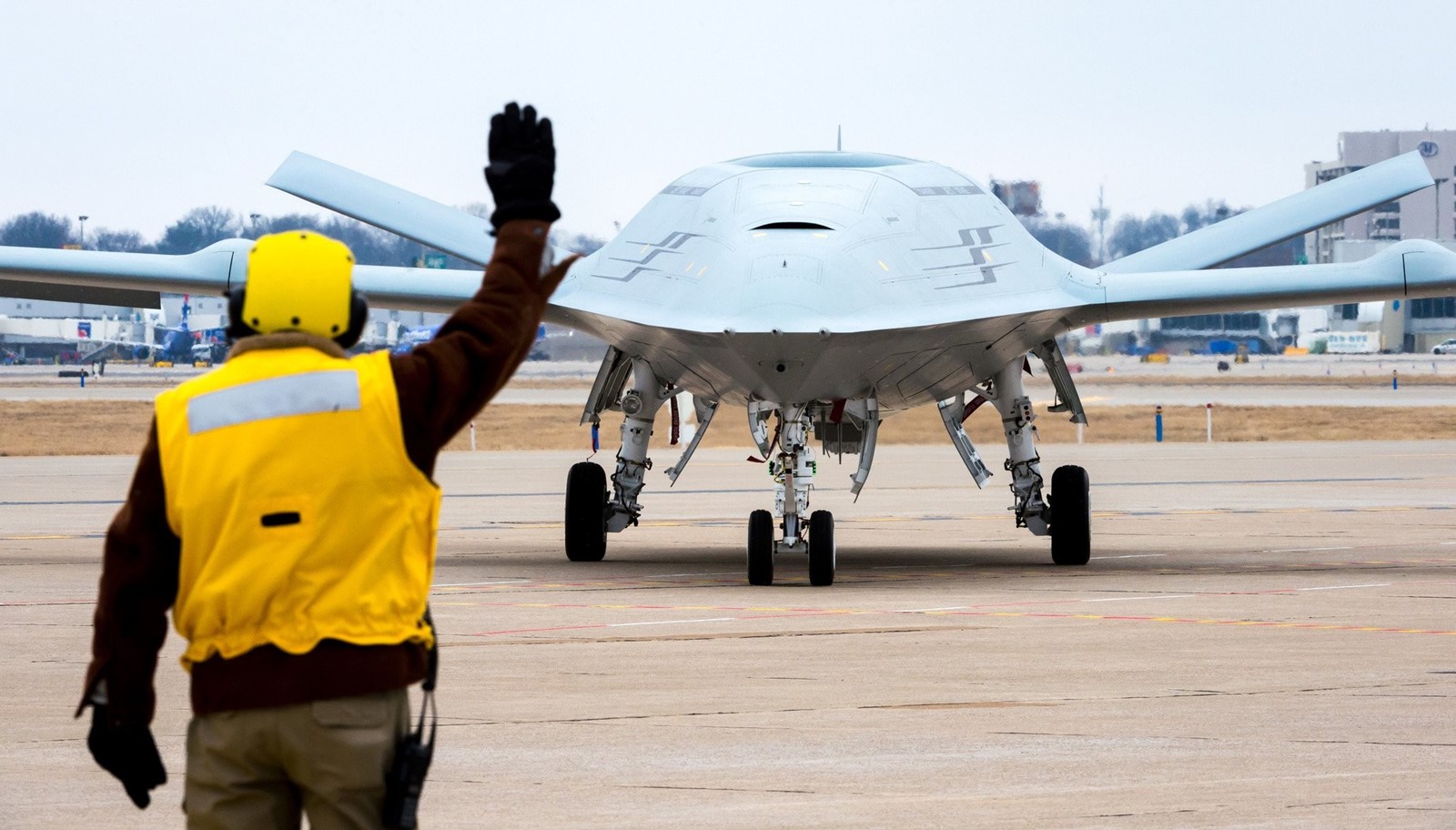 BOEING’S prototype for the Navy’s MQ-25 Stingray, an unmanned aerial tanker that will be launched from an aircraft carrier deck, maneuvers in a deck-handling demonstration in February in St. Louis. (Eric Shindelbower Boeing) 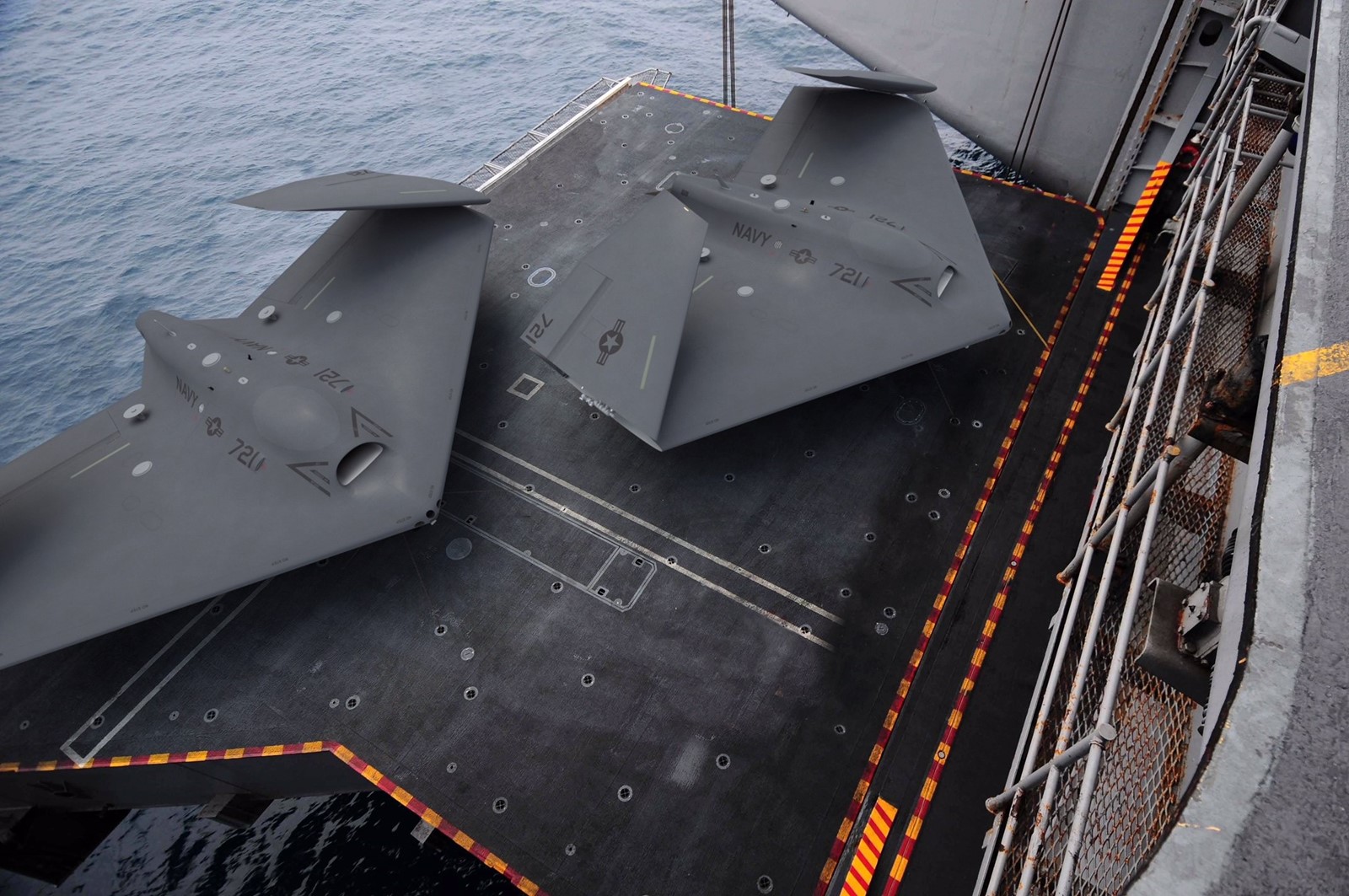 A RENDERING of Lockheed’s drone aerial refueling tanker. The wingtips fold for use on a carrier. (Patrick Heil U.S. Navy)
PREVIOUS IMAGE

The U.S. military has come to rely on drones for surveillance, reconnaissance and attack. Soon, another job will be added to the list: refueling aircraft in midair.

Lockheed Martin Corp., Boeing Co. and General Atomics are all vying for a U.S. Navy contract to build the MQ-25 Stingray, an unmanned aerial tanker that will be launched via catapult from a carrier deck. The contract, which does not yet have a set dollar amount, is to be awarded this summer.

Much of the work is being done in Southern California — at Lockheed Martin’s famed Skunk Works unit in Palmdale and at General Atomics’ San Diego operations. The Navy will initially purchase four test aircraft, but eventually plans to spend almost $2.5 billion to produce 72 tankers, with the first becoming operational in 2026.

While its task seems prosaic, the MQ-25 portends a far more extensive use of unpiloted aircraft in the military. The Navy already is turning over some ocean surveillance duties to Northrop Grumman Corp.’s Triton drone. And the new B-21 bomber being developed for the U.S. Air Force by Northrop Grumman will be able to operate autonomously or with a crew.

“One of the big unanswered questions for all concerned at this point is how foundational is MQ-25 likely to be for [unmanned aerial vehicle] systems going forward,” said Andrew Hunter, director of the defense-industrial initiatives group at the Center for Strategic and International Studies, or CSIS.

There has long been a “gut sense” that aircraft carriers need to add drones to “remain relevant in the war fight,” but there hasn’t been a clear idea of what, exactly, they would do, he said.

That level of uncertainty is steeped into the program’s history. Originally envisioned as a surveillance and strike-capable drone, the MQ-25 saw its requirements restructured in 2016 to make refueling the top priority. The change in requirements makes sense when considering the current makeup of the carrier air wing, said Mark Cancian, senior advisor with the international security program at CSIS.

The F/A-18 Super Hornet and F-35 Lightning II fighters have relatively short ranges compared with the planes they replaced, the F-14 Tomcat and A-6 Intruder. That’s a trade-off for the newer planes’ advanced technology. But in potential conflicts with countries such as China or Russia, which have the ability to threaten aircraft carriers hundreds of miles from shore, range “becomes a real problem,” Cancian said.

At the same time, the Navy doesn’t want to tie down its limited number of F/A-18s to serve as tankers. Smaller unpiloted aircraft make more room for shipboard storage of weapons or fuel, said Mike Blades, North American research director for aerospace and security at market research firm Frost & Sullivan. And “you don’t have to worry about crew fatigue,” he said.

In general, the drones will require a human operator for guidance on-deck and to punch in mission details, such as altitude and speed. After launch, they will largely be on their own.

All three of the competitors for the MQ-25 contract had been working on designs for years, and some prototypes had been built when the Navy changed its requirements.

The biggest surprise came in October, when Northrop Grumman announced it would not submit a bid, even though it seemed to have a head start with the X-47B, a tailless, stealthy demonstrator drone. Chief Executive Wes Bush told analysts on an earnings call that the company couldn’t present an “attractive offering” to the Navy that would “represent a reasonable business proposition.”

In the span of two years, Boeing had gone from design review to building and rolling out a prototype, said Don “BD” Gaddis, Boeing’s MQ-25 program manager in St. Louis. Boeing’s drone will use a Rolls-Royce engine, which also powers the U.S. Air Force’s Global Hawk and Navy’s Triton drones. The concept is basically the same plane, though the drone’s interior has changed to utilize greater off-the-shelf technology for its secondary mission of surveillance and intelligence-gathering. “That takes a lot of risk, lot of cost, lot of schedule out of the program,” Gaddis said.

Gaddis said the company’s legacy on carrier decks — stretching back to the World War II-era TBD Devastator torpedo bomber produced by Douglas Aircraft Co., which was absorbed by Boeing in 1997, and more recently with the F/A-18 — could give Boeing an advantage. In February, Boeing showed the Navy how its drone could be steered through the tight confines of a carrier deck.

Lockheed is counting on the legacy of rapid development at Skunk Works. When the program requirements changed, the company “started over with a clean sheet of paper,” said John Vinson, LockheedMQ-25 program manager. The company is going with a flying wing, whose tips can fold in at the edges to fit on a crowded carrier deck.

“What brought us back at the end to the flying wing design is its structural and aerodynamic efficiency,” Vinson said. “It distributes all the fuel load.”

Most of LockheedMQ-25 workforce is in Palmdale, with some of it located in Fort Worth, where the company assembles the F-35. (Lockheed’s drone uses the F-35’s landing gear.)

General Atomics is using its existing Predator C Avenger as the “surrogate” for its MQ-25 offering. The San Diego company — which essentially launched the military drone era with its Predator in the early 2000s — said its decision to use Avenger “significantly reduces schedule for getting the MQ-25 system operating quickly for the U.S. Navy.”

General Atomics demonstrated the Avenger’s taxi capability on a carrier deck this month. The company said in a statement that drone operators will use special director wands similar to the ones currently used by humans to control carrier aircraft taxi operations. The drone will be able to “talk back” to the controller through flashing and color-changing LED lights to indicate aircraft condition or status, a process a company official described in a statement as “[Nintendo] Wii for aircraft control.”