Officials struggle to bring families together

Federal agencies scramble with no clear direction on dealing with parents and children entering U.S. 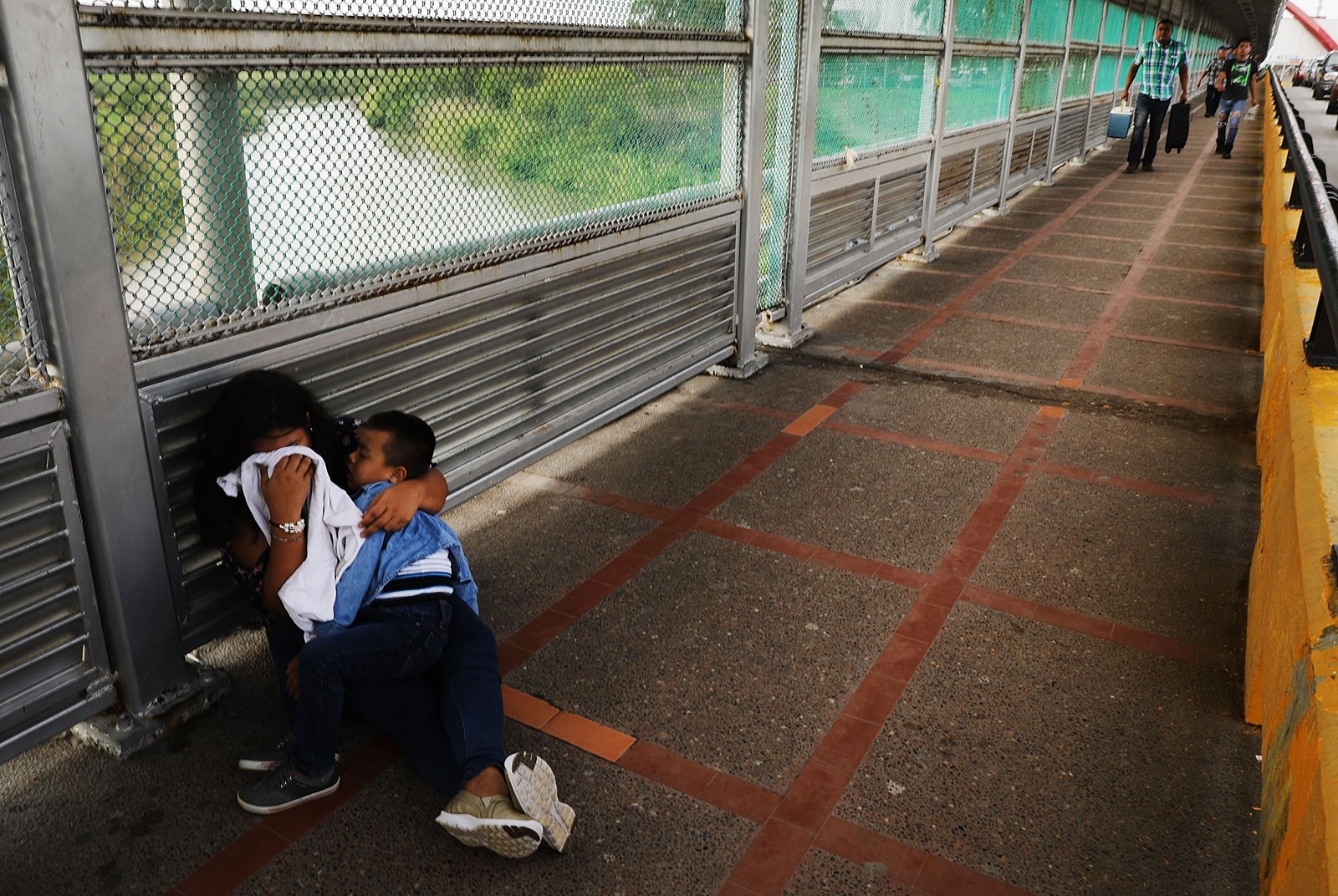 A WOMAN from Honduras weeps with her child in her arms on a border bridge after being denied entry into the U.S. at Brownsville, Texas. They still risk being separated and detained if they enter the U.S. (Spencer Platt Getty Images)
PREVIOUS IMAGE

The process of reunifying families who have been separated at the border could take months, federal officials said Friday, as lawyers, advocates and lawmakers said that the path ahead remained murky and chaotic, and the Trump administration failed again to provide clear direction on how to resolve the issue.

“To wait four months — my God, that’s agonizing,” said Daniel Garza, president of the conservative Latino organization Libre Initiative, after a Department of Health and Human Services field supervisor outlined a process that could last that long while speaking in McAllen, Texas, at a roundtable convened by the state’s two senators.

Federal officials say about 2,300 children have been detained apart from their parents since May, when the administration began holding many adults who cross the border illegally and charging them with misdemeanors, rather than allowing them to await asylum hearings with monitoring — a process President Trump has derided as “catch and release.”

On Wednesday, Trump signed an executive order intended to halt the separation of parents and children by detaining families together. Since then, his administration has struggled to articulate a plan to put the families back together or determine what effect doing so would have on enforcement, given the limited bed space for families.

An administration official confirmed Friday that about 500 children have been reunited with their parents since the administration’s “zero tolerance” enforcement program began in early May. It was unclear how many — if any — of those reunifications occurred since Trump’s order on Wednesday. The official was not authorized to speak on the record.

The official said federal agencies were setting up a centralized process to reunite families at the Port Isabel Detention Center, at the southern tip of Texas. It is unclear how many children remain in federal custody, largely because of the web of agencies that process and detain children and their parents. Adults have been in the custody of the U.S. Marshals Service if they are awaiting prosecution, or the Department of Homeland Security. Most of the children are being held in centers supervised by the Department of Health and Human Services.

Federal prosecutors in Austin and McAllen, the two districts along the border in Texas, said the zero-tolerance policy was still in effect.

Attorneys, advocates and enforcement officials, however, painted a picture of uneven and uncertain enforcement in recent days.

Rio Grande Valley Border Patrol Chief Manuel Padilla said at the McAllen roundtable that his office was still evaluating how to handle parents who cross illegally for the first time. They have been charged with misdemeanor illegal entry under the zero-tolerance policy. Lawyers with the Texas Civil Rights Project, which has interviewed nearly 400 parents who are looking for their children, said at least 17 parents had not been criminally charged on Thursday.

In the Western District of Texas, which spans from El Paso to Waco, U.S. Atty. John Bash said that since Trump’s order, parents and children are now being held together under the custody of the Department of Homeland Security. Bash said his office had dismissed some criminal cases, but declined to say how many.

Whether the prosecution dismissals were “a pause or policy change” was unclear, said Denise Gilman, who directs the University of Texas Law School Immigration Clinic. “It is all very fluid,” she said.

The lack of a plan continued to roil Congress. Sen. Jeanne Shaheen (D-N.H.) called on Homeland Security Secretary Kirstjen Nielsen to resign if she could not “promptly produce and implement a plan to reunite children separated from their parents.”

“It’s unconscionable that this policy was carried out without any plans or procedures in place to eventually reunite these families,” Shaheen said in a statement. “Secretary Nielsen is responsible for this callous implementation.”

Nielsen’s office did not respond to a request for comment, part of a silence from the agency that began Wednesday, when Trump hastily drew up the order.

Sen. John Cornyn (R-Texas), who toured two shelters for migrant children on Friday, called family separations a “humanitarian crisis.” While he said that “steps are already underway to reunite children,” he cautioned that officials should strike a balance between reunification and deterrence.

The White House offered little in the way of a plan. Instead, officials criticized media coverage of the issue. A tweet from Press Secretary Sarah Huckabee Sanders, attacking a photo of a 2-year-old Honduran girl used in a Time Magazine photo illustration, was blasted out on the official White House constituent newsletter.

“It’s shameful that dems and the media exploited this photo of a little girl to push their agenda,” Sanders wrote. “She was not separated from her mom. The separation here is from the facts.”

Time stood by its use of the photo as capturing “the stakes of the moment.”

Trump also hosted an event with a group he calls Angel Families — people who have lost loved ones in homicides and drunk-driving accidents that allegedly involved immigrants in the country illegally.

“You hear the other side. You never hear this side,” Trump said, standing by the victims with a backdrop that read, “Protect our families.” Several family members held large photos of relatives who had been killed, some with Trump’s autograph.

“These are American citizens permanently separated from their loved ones,” Trump said. He and the family members accused the media of ignoring their stories in favor of sympathetic coverage of immigrants who crossed the border illegally.

Numerous studies have shown that immigrants — legal and illegal — commit no more crimes than the general population.

“I’m out here speaking for the thousands of victims,” said Juan Pina. His daughter Christy Sue was found dead 28 years ago in a Castroville artichoke field. Her alleged killer was extradited from Mexico in May.

Trump pointed to the families’ losses as inspiration for changing the nation’s immigration laws. But in an early-morning tweet, he all but killed an immigration measure supported by the House Republican leaders, saying that lawmakers shouldn’t bother with legislation he had claimed to support a few days ago.

“Republicans should stop wasting their time on Immigration until after we elect more Senators and Congressmen/women in November,” Trump tweeted, forecasting that the GOP would gain seats in the midterm election.

During a meeting with lawmakers earlier in the week, Trump said he supported the bill “1,000%.”

The shifts offered another reminder to GOP lawmakers of Trump’s unreliability as a partner. The president, capable of providing lawmakers with the political cover to take difficult votes on immigration, has hesitated to commit to legislation and has often reversed himself after doing so.

Trump believes a divisive debate over immigration will benefit his party in November’s election, and he continues to blame Democrats for the immigration impasse. But many rank-and-file Republicans, already facing a strong Democratic headwind and nervous about preserving their majorities, aren’t convinced.

The legislation in question offered a potential vehicle for a long-term fix to the law under which immigrant families have been separated. The proposal was scheduled for a vote next week, although it appeared unlikely to pass.