To save thousandths of a percent of the U.S. budget, the president wants to throw about half a million children off the lunch program 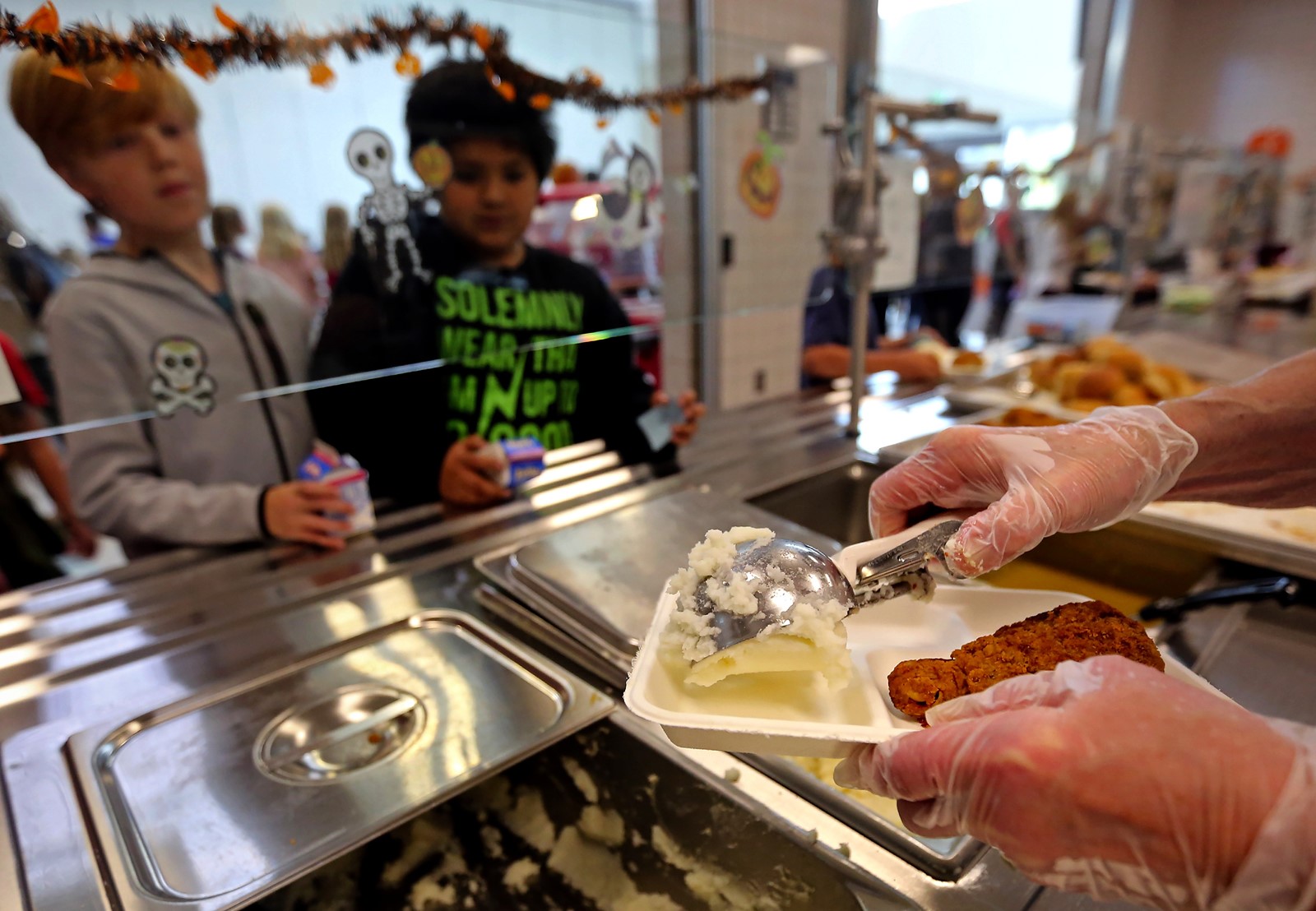 LUNCH is served this month at a school in Cottonwood Heights, Utah. About a million children live in households that would lose their food stamp eligibility. (Kristin Murphy Associated Press)
PREVIOUS IMAGE

Ever vigilant for ways to save money for the overburdened federal taxpayer, the Trump administration last week delivered its analysis of a change in eligibility for free or reduced-price school breakfasts and lunches.

The savings: $90 million a year, or two thousandths of a percent of the $4.4-trillion federal budget. The collateral damage: about half a million children who would no longer be eligible for free school meals. They’re a subset of about 1 million children living in households that would lose their eligibility for food stamps.

The consequences of this shortsighted policy could be dire. Food stamps and school meals make powerful contributions to household economic stability and children’s health.

As Hilary Hoynes of UC Berkeley has observed, “the benefits of nutrition support can persist well into adulthood for those who have access to the program before birth and during early childhood.” The benefits include improved achievement in school and lower rates of obesity, hypertension and heart disease in adulthood.

The analysis came from the Department of Agriculture, which administers the food stamp and school meal programs. It’s a more precise estimate of the impact of rule changes the USDA first announced in July.

The latest figures, however, inspired such an uproar among anti-poverty experts that the administration reopened the official comment period on the rule — extending it by two weeks to Nov. 1.

We’ve written before about the assault by conservatives and the Trump White House on people they choose to think of as the undeserving poor. That’s the outgrowth of a mind-set that views our most vulnerable populations as malingerers, rip-off artists or guilty of moral turpitude.

The USDA’s proposal is an especially nasty example of this behavior. Let’s examine how it would work.

The main thrust of the rule change is an end to “broad-based categorical eligibility” for the food stamp program, which is formally known as the Supplemental Nutrition Assistance Program, or SNAP.

Food stamps are cut off for households with income of more than 130% of the federal poverty line, or $33,475 per year for a family of four (about $2,790 a month). Household income is calculated after exemptions for certain expenses.

Under broad-based categorical eligibility, states can deem households eligible for food stamps based on if they’re receiving assistance from some other anti-poverty programs. The rule, which has been in effect for about 20 years, also allows states to raise the income eligibility and asset limits to promote SNAP eligibility.

Many also do so to avoid the “benefit cliff,” which happens when a modest increase in a family’s income results in a complete cutoff of benefits, leaving the family worse off than when its employment income was lower.

The USDA calculated that the rule change would throw more than 680,000 households with children off SNAP. Of those, about 80% have children in school — 982,000 children, according to the agency’s calculations. And of those, 55%, or about 540,000, would no longer be eligible for free meals, although most would be eligible for reduced-price meals. About 40,000 would have to pay the full rate.

There’s a further wrinkle. Households thrown off SNAP will have to apply separately for access to free or reduced-price school meals for their children. That raises an administrative barrier that may keep many from gaining access, and will raise administrative costs for states.

Agriculture Secretary Sonny Perdue has defended this rule change as part of a campaign to close eligibility “loopholes” that allow people to claim benefits to which they’re not entitled, but that’s just window-dressing.

Those households received smaller benefits than the average. The GAO didn’t find that applicants were gaming the asset rules, but rather, that most fell within SNAP guidelines.

Broad-based eligibility, the GAO concluded, had raised SNAP benefit costs by less than 1%. And that was when the aftereffects of the 2008 crash and the recession were still very much in evidence. Since peaking in 2013, SNAP rolls have fallen more than 16%.

But that hasn’t eliminated the need for SNAP or for the school meals program. In this as in so many other initiatives, the Trump administration is trying to present sheer malevolence as a virtue.