VA sets up a tent city for homeless 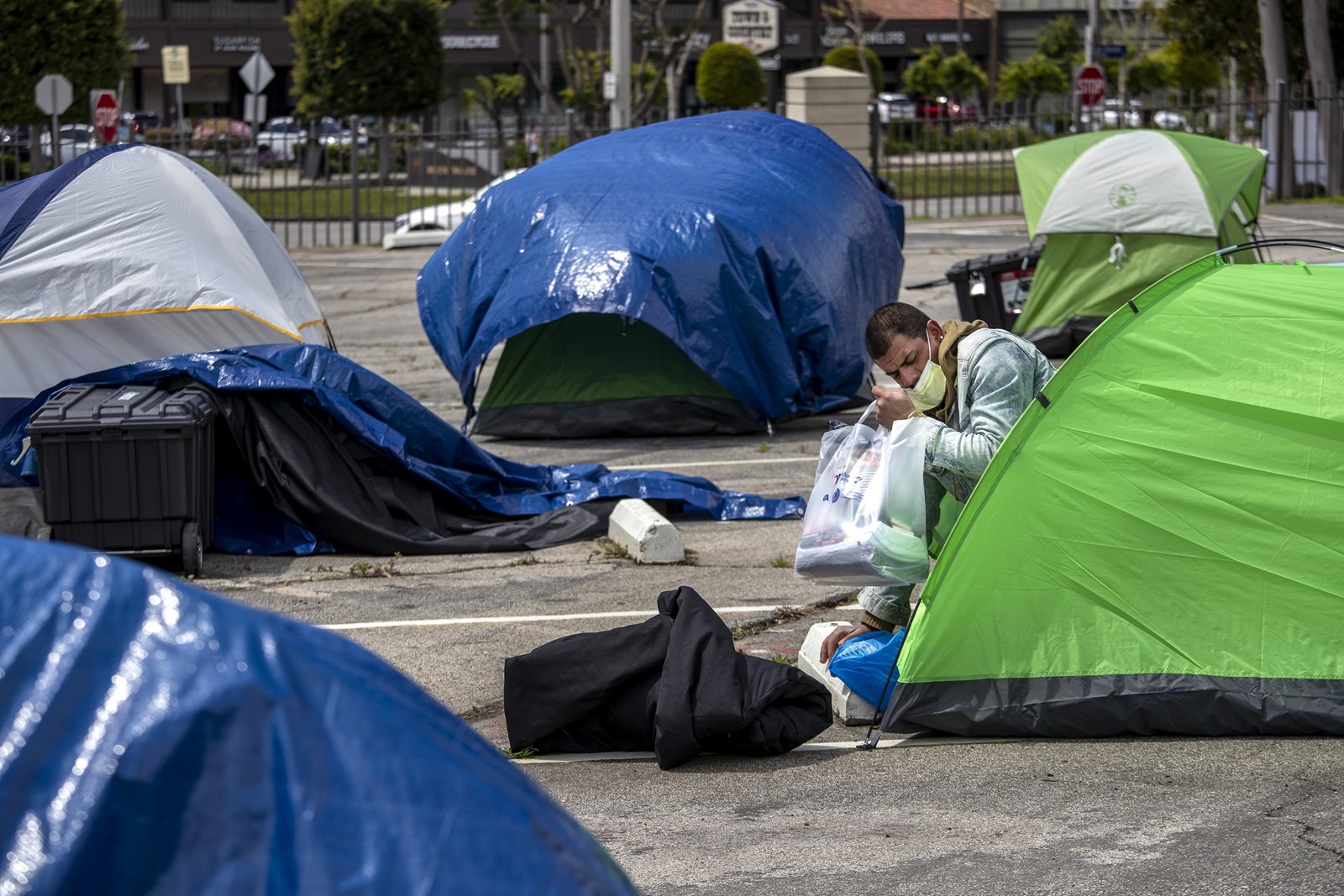 Tent cities and tiny-house villages for homeless people have long been taboo in Los Angeles, where they’ve been deemed too expensive to maintain and too difficult to dislodge once established.

But the novel coronavirus has a way of upending the most deeply entrenched thinking.

Last week, the U.S. Department of Veterans Affairs set up L.A.’s first temporary tent city in four decades. It’s for veterans without homes — 25 initially, with a plan to expand to 50 as needed — so they can wait out the COVID-19 crisis by sheltering in place and social distancing in their own tents.

Until now, the city and county of Los Angeles have largely relied on shelters — and increasingly hotel and motel rooms — to help protect homeless people who are most at risk for contracting the virus. But last week, a homeless man tested positive while staying at a shelter in the San Fernando Valley and 68 homeless people and two staffers were infected in an outbreak at a shelter in San Francisco. Now the incidents are prompting a fresh look at campgrounds.

“It’s not a bad idea to try it as an emergency measure,” said Mike Neely, a former commissioner with the Los Angeles Homeless Services Authority.

But with officials warning that stay-at-home orders could last into the summer, such campgrounds could become semi-permanent fixtures. They also could face some of the same problems as shelters in trying to separate guests during mealtimes or in restrooms.

The VA was quick to note that its site, on a parking lot on the VA’s Greater Los Angeles Healthcare System campus on the Westside, was not a campground but rather a “services center.” The operation includes medical and psychiatric care, as well as monitoring, food services, bathrooms, showers and security.

A long-delayed VA bridge shelter also has opened on the campus, but with a reduced capacity of 50 people to accommodate the social distancing recommended to prevent the spread of the coronavirus.

Just three months ago, VA officials had ignored an oversight board’s call for more emergency shelter beds on the sprawling 388-acre campus, with rolling green hills and decrepit buildings that are largely empty. The VA argued then that there was a surplus of beds for homeless veterans.

Then came the COVID-19 pandemic and an acute risk to 44,000 people — including 2,900 veterans — who live in vehicles, makeshift shanties and tents in Los Angeles County.

Frequent hand-washing and social distancing, the gold-standard recommendations for fighting the novel coronavirus, range from difficult to impossible to do while living in a grimy sidewalk encampment. Many homeless people also are medically fragile from years of living on the streets and are older, both of which put them at risk for contracting a severe case of COVID-19.

Elected leaders in Los Angeles have responded to the pandemic’s threat to the street population by converting recreation centers into shelters. The city also has boosted coronavirus testing on skid row and provided outdoor hand-washing stations and bathrooms. Responding to reports that the stations were often empty of soap and water, city officials vowed to refill them more frequently and said that more are being deployed.

Meanwhile, thousands of newly leased hotel and motel rooms are beginning to fill up with homeless people in Los Angeles County.

Most have been reserved for those who have been relocated from crowded shelters, or for people with underlying health conditions or other factors that put them at high risk for the virus. Advocates fear that homeless people who live in cars, sidewalk tents and lean-tos will be left behind as the pandemic escalates. And they warn that time is running out.

Authorities said Monday that 23 homeless people in L.A. County, including four staying in shelters, had tested positive for the virus.

But encampments are largely isolated from the broader community — a fact that may have afforded homeless people a measure of protection as the pandemic grew in March, said Dr. Joshua Bamberger, an expert on homelessness and a professor at UC San Francisco.

The citywide shutdown of businesses also cut off homeless people from restaurant bathrooms, charging outlets, food donations and other resources on which they normally rely. Many hunkered down in their tents. But on April 1, Bamberger noted, monthly government assistance checks arrived, probably prompting a good number of homeless people to venture out and buy food and other supplies.

“We have to do this right, right now,” he said, “before this rips through the tents.”

Some L.A. officials are calling for the city and county to do what Tampa and Las Vegas have done, and open tent cities to protect and monitor homeless people.

L.A. City Councilman Mike Bonin has proposed a “safe camping” pilot project in his Westside district, perhaps in one of the beach parking lots that were emptied to break up crowds violating the city’s stay-at-home order.

Mayor Eric Garcetti declined to say if he would support or oppose organized campgrounds, but pledged to protect homeless people and expressed faith in the city’s current efforts.

Other top officials handling the coronavirus crisis said they would not rule out tent cities if the pandemic warrants them.

“Nothing is off the list,” said L.A. County Department of Public Health Director Barbara Ferrer.

Back at the VA campus on Thursday, 11 veterans and a spouse of one hunkered down in carefully spaced tents and tarps in the parking lot.

One called the service center “a godsend.” Another veteran told VA spokesman Steven Ruh that he recently had been attacked while he was sleeping on the street. “Now he’ll have a watchful eye over him to make sure he’s safe,” he said.

“This could be a turning point,” said Robert Rosebrock, an Army veteran who has long accused the VA of commercializing its medical campus and shorting healthcare services and housing opportunities for veterans. “These people have so much potential. Now with this virus thing and all of us facing troubled times, maybe we can do more for them.”