From ‘birther’ to ‘Obamagate’ to ‘treason’

Trump fueled his political career with unfounded theories against Obama. Here are a few falsehoods. 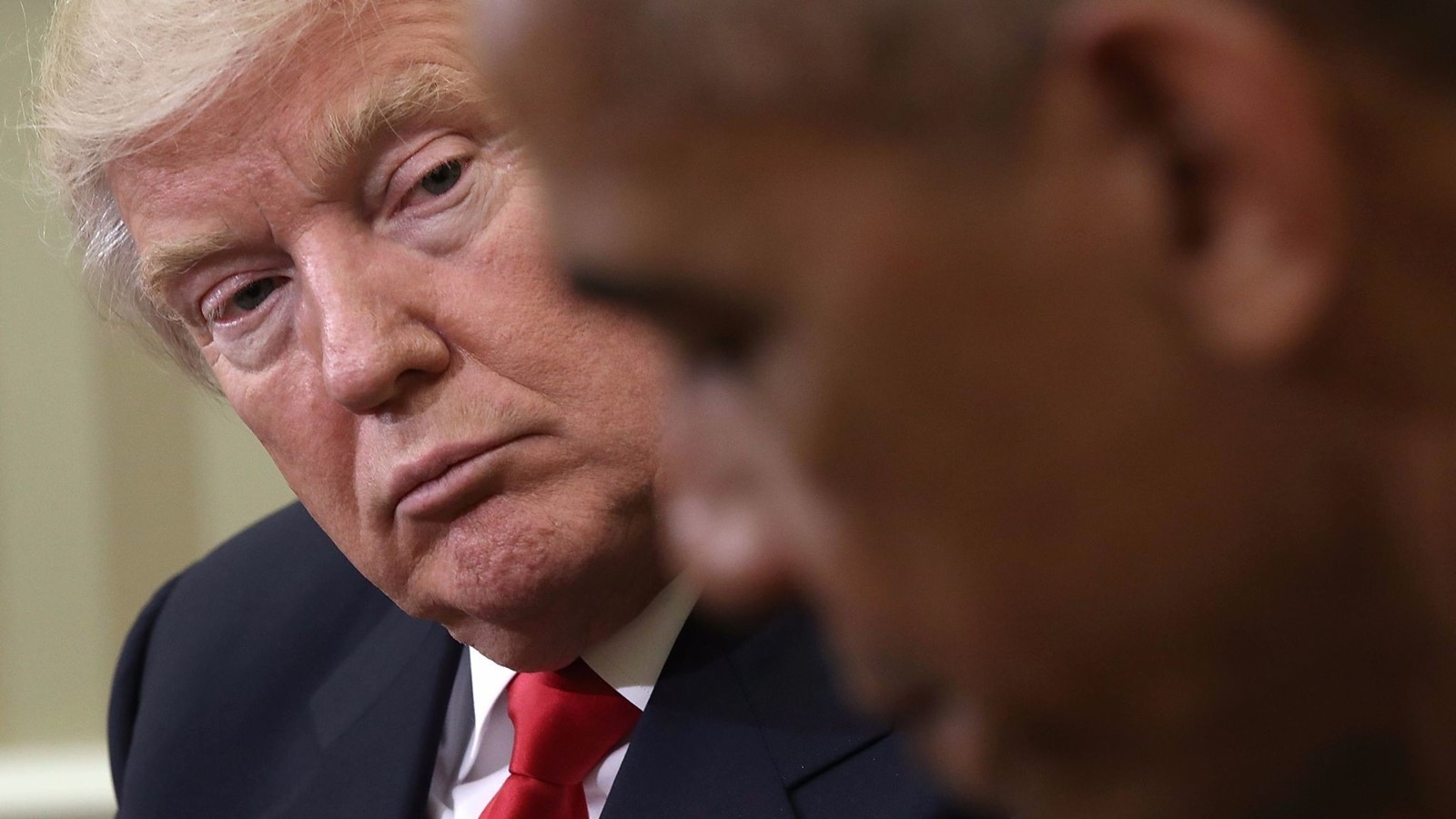 DONALD TRUMP, then president-elect, in the Oval Office with former President Obama, who is a frequent target of Trump’s unsubstantiated conspiracies. (Getty Images)
PREVIOUS IMAGE

Donald Trump gained momentum for his political career by promoting the unfounded “birther” conspiracy theory about President Obama. Now, facing a pandemic, a shattered economy and unrest after three-plus years in the White House, Trump continues to push incendiary and unsubstantiated theories about his predecessor.

Trump said last week, without evidence, that Obama had committed “treason” by spying on his campaign, in reference to his years-old claim that the Obama administration tapped his phone lines at Trump Tower before the 2016 general election.

“It’s treason,” he said during an interview with the Christian Broadcast Network that aired Tuesday. “Look, when I came out a long time ago, I said they’ve been spying on my campaign ... turned out I was right. Let’s see what happens to them now.”

But when asked at a news conference to explain what he was claiming Obama had done, Trump declined. “You know what the crime is,” Trump told reporters. “The crime is very obvious to everybody.”

In the days that followed, it became clear that “Obamagate” was a catchall term for the unsubstantiated claim that Obama led an illegal plot to undermine Trump. It’s also one of the latest in a series of groundless accusations Trump has made against his predecessor.

Trump has often spread conspiracy theories about the people he sees as political enemies. He amplifies accusations of illegal or immoral behavior through tweets and comments, often with vague qualifiers such as “people are saying.”

During the 2016 presidential election alone, Trump said the circumstances around the 1993death of Clinton administration counsel Vince Foster were “fishy” and claims of Hillary Clinton’s involvement were “serious”; he retweeted an article that falsely claimed Sens. Marco Rubio and Ted Cruz weren’t eligible to run for president; and he cited the National Enquirer to claim Cruz’s father was linked to the assassination of President Kennedy.

Trump has returned to conspiracy theories about Obama time and again, and the accusations have grown more serious in nature.

Trump amplified the false conspiracy theory questioning where Obama was born, becoming the face of the racist birther movement. Obama, who was born in Hawaii, had released his certification of live birth during the 2008 presidential campaign.

In a series of interviews, Trump said he had doubts about where Obama was born and suggested that his birth certificate might list his religion as Muslim. (Obama is Christian.)

During an interview with CNN’s Anderson Cooper that aired April 25, 2011, Trump repeated his claim that he had a team in Hawaii investigating Obama’s birth and said he’d been told the birth certificate was missing or didn’t exist. “I’ve been told,” Trump said repeatedly, but would not say by whom. (CNN staff reporting on Obama’s birth certificate said they saw no evidence of Trump associates looking into the matter.)

Obama released his long-form birth certificate on April 27, 2011. In his remarks on the release, Obama criticized those who perpetuated the conspiracy and the news cycle and said the country was “not going to be able to solve our problems if we get distracted by sideshows and carnival barkers.”

“Now he can get back to focusing on the issues that matter,” Obama said. “Like, did we fake the moon landing? What really happened at Roswell? And where are Biggie and Tupac?”

But Trump kept returning to the conspiracy theory. In 2013, he tweeted: “How amazing, the State Health Director who verified copies of Obama’s ‘birth certificate’ died in plane crash today. All others lived.”

Trump cast doubts on where Obama was born until 2016, when he pivoted to a new false theory: Hillary Clinton had started the rumors.

In the midst of the birther controversy, Trump asked for a different set of records: proof that Obama earned his way into college.

“I heard he was a terrible student, terrible,” Trump told the Associated Press in an April 2011 interview. “How does a bad student go to Columbia and then to Harvard? I’m thinking about it; I’m certainly looking into it. Let him show his records.”

Trump continued to promote articles challenging Obama’s academic record as late as 2014. In 2012 he tweeted a Breitbart article — written by far-right activist Charles C. Johnson — that speculated Obama had lower SAT scores than President George W. Bush and benefited from affirmative action when he transferred to Columbia University. Trump also tweeted: “I wonder if @BarackObama ever applied to Occidental, Columbia or Harvard as a foreign student. When can we see his applications? What do they say about his place of birth.”

In his 1995 memoir, “Dreams From My Father,” Obama acknowledged that his mother was concerned about his “slipping” grades, and he’d had doubts about college. But, he wrote, he wasn’t “flunking out” and he did end up applying and being accepted to college. He attended Occidental College for two years before transferring to Columbia, where he began focusing more on his studies, he told Columbia College Today in 2005.

“When I transferred, I decided to buckle down and get serious,” he said. “I spent a lot of time in the library. I didn’t socialize that much. I was like a monk.”

Like Obama, Trump has not released his academic transcripts.

After two years at Fordham University, Trump moved to the Wharton School of Business at the University of Pennsylvania, where he received his bachelor’s degree in 1968. James Nolan, a former University of Pennsylvania admissions officer, was friends with Fred Trump Jr. and interviewed his brother Donald at his request, he told the Washington Post last year. Nolan said it was “not very difficult” to get into the school at the time.

As the investigation into Russian meddling in the presidential election ramped up in the early months of his presidency, Trump accused Obama of having tapped his phone lines in Trump Tower.

The allegation spread through conservative news outlets before making its way to the White House and eventually into a series of March 4, 2017, tweets by the president. “Terrible! Just found out Obama had my ‘wires tapped’ in Trump Tower just before the victory,” he wrote in one post. “Nothing found. This is McCarthyism!”

In the days that followed Trump’s tweets, White House officials broadened the claim to suggest the Obama administration had improperly spied on his campaign.

Trump’s allies seized on revelations that the FBI made numerous errors in a counterintelligence probe into whether associates of Trump and his campaign coordinated with Russia to influence the election. In December 2019, Justice Department Inspector General Michael Horowitz released a report sharply criticizing the FBI for withholding information from the department about a former Trump campaign aide suspected of working with Russian intelligence. Horowitz concluded, however, that the FBI had legal and factual justification to start the investigation.

The report also said investigators found no evidence that the mistakes were influenced by political bias. But Trump claimed he had survived “an attempted overthrow.”

On May 7, the Justice Department announced it was dropping its case against Michael Flynn, Trump’s former national security advisor who pleaded guilty to lying to the FBI about his calls with Russia’s ambassador to the U.S. Three days later, Trump launched a tweet storm railing against the media, the criticism of his response to the COVID-19 pandemic and “the biggest political scandal in American history.”

Trump and his allies are pushing the theory that Obama and his administration officials illegally targeted Flynn as part of a conspiracy to undermine the president-elect.

Phone transcripts show that Flynn urged Russia’s ambassador not to retaliate against Obama administration sanctions and told him “we can have a better conversation” after Trump’s inauguration. Flynn later pleaded guilty to lying to federal agents about his talks with the ambassador. Trump fired Flynn after only 24 days in office, then said his top security advisor had been treated unfairly.

Allies of the president have pointed to two declassified documents released in May related to the investigation into Flynn.

In an email, then-national security advisor Susan Rice described a Jan. 5, 2017, Oval Office meeting in which Comey expressed concern to Obama about sharing information with Flynn because of his communications with the Russian ambassador. Another document shows that Vice President Joe Biden was among dozens of senior Obama administration officials who might have been informed about Flynn’s contacts with the Russian ambassador.

Neither document shows any wrongdoing. Rice’s email states that Obama told Comey to proceed “by the book,” and the document listing Biden as an official who learned of Flynn’s contacts states that the former Trump advisor’s “unmasking” was approved by the National Security Agency.

The Justice Department’s decision to try to drop the Flynn prosecution has prompted critics to question whether Trump was improperly influencing criminal prosecutions in a politically charged case.

But Trump has continued with the “Obamagate” narrative, and a Senate committee headed by Trump ally Sen. Lindsey Graham (R-S.C.) is now investigating the Russia investigation.