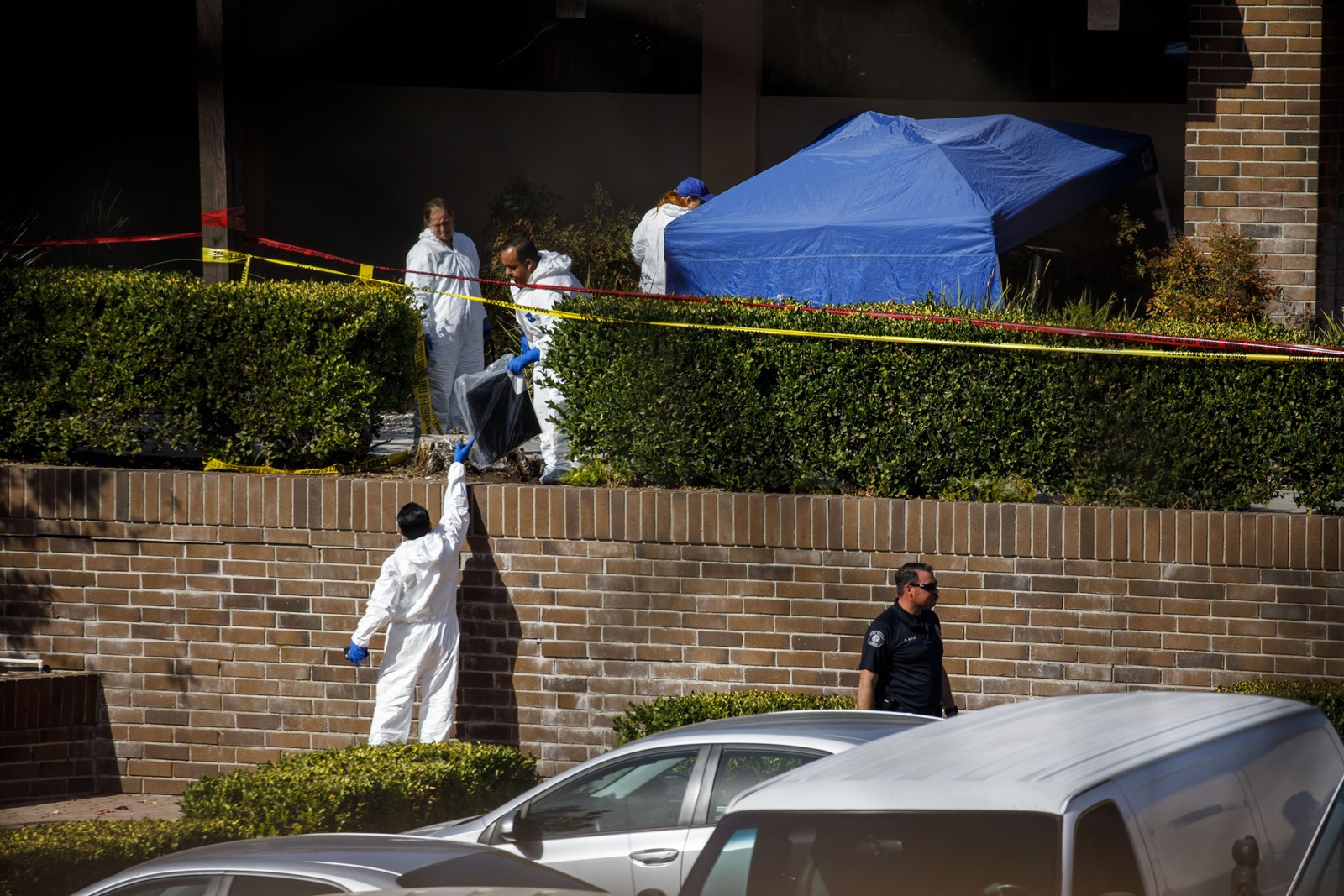 VENTURA COUNTY sheriff's officials and FBI agents investigate the scene of the mass shooting at the Borderline Bar and Grill in Thousand Oaks. (Patrick T. Fallon For The Times)
PREVIOUS IMAGE

In Thousand Oaks, the victims were being identified at the horrific crime scene, where the shooter was said to be a 28-year-old Marine who had exhibited signs of possible PTSD.

In Los Angeles, Steve Peck, himself a Marine, was preparing for what would be a busy day. The annual fundraiser for U.S. Vets was scheduled for Thursday evening, and Peck — who served in Vietnam in 1969 and 1970 — is the executive director. U.S. Vets is celebrating its 25th anniversary as a provider of housing, counseling, job connections and other services, and there’s a reason for its existence.

The Department of Veterans Affairs does some great work, but for years, the services have been spotty.

It was too soon to know much about the shooter, who had posted online that he was an infantry machine gunner in Afghanistan, or whether he was regularly getting help from the VA or any other service provider. By one account, after a disturbing-the-peace complaint at his home in April, police called in mental health workers who concluded he didn’t need to be taken into custody.

And it’s important to note that most mass shootings in the United States don’t involve veterans. But Peck knows that far too many veterans don’t get needed help. And Thousand Oaks may offer one example of what’s missing.

“What we have been trying to do,” said Peck, “is get more cooperation between the Department of Defense and the VA, so when they come out of discharge and land in Southern California, we, the VA, all the post-service organizations, are aware … especially with young guys who’ve had three deployments … the ones who were really in the thick of it.

“Let’s reach out to these guys before they get into trouble and get the DOD to make that connection with the VA.”

So why hasn’t it happened?

“There are privacy issues and HIPAA,” Peck said, referring to a federal law that requires the safeguarding of medical information. “HIPAA is the enemy of a lot of us trying to provide these services early on.”

Peck said he was working through channels in Washington, D.C., to establish a system that identifies those in need of help but also protects their privacy as much as possible.

The majority of men and women who return from service can reintegrate reasonably well, said Peck. But about 20% have issues that can lead to isolation, alcohol or drug abuse, domestic violence, homelessness, job loss and aggressive outbursts. Many of them had trauma in their lives even before entering the military.

“This guy sounds like he was really troubled,” Peck said of the Thousand Oaks barroom killer, who was dead at the scene along with a Ventura County sheriff’s sergeant and multiple students from area colleges. “He was bouncing around, having brushes with the law for apparently a couple of years. If he was in combat, that’s a guy who should’ve been on a watchlist, and having some social worker going out there to say, ‘Let’s talk about this.’”

Peck, son of the late actor Gregory Peck, said he experienced post-traumatic stress disorder for several years after returning from Vietnam, back in the days before there was such a diagnosis.

Even with the advent of diagnosis and treatment for PTSD, there’s still a stigma associated with combat-related illness. Peck said some vets know they’ve got problems but believe they can handle them without help. Some are in full denial, or refuse to admit to problems that might prevent them from getting jobs as police officers or firefighters.

Several years ago, U.S. Vets began putting staff on college campuses as a preventive outreach measure. The idea was that most colleges have veterans taking advantage of the GI Bill, which presents an opportunity to reel them in before combat-related issues surface. Thirteen campuses now have the program in place, with social workers and psychology students serving as counselors.

As I noted, most mass shooters are not veterans, and we may never know what had gone haywire in the mind of the Thousand Oaks assassin. But if you’re a combat vet, neighbors have complained about threatening behavior, and police have responded to your home, should you be able to legally own a gun, as the Marine allegedly did?

But this is the United States, where one mass shooting after another brings calls for stricter gun control, most of which are entirely ignored by lawmakers.

Feinstein said that although we don’t know all the details of the Thousand Oaks shooting, we know how to reduce the frequency of such massacres. Despite its strict gun laws, Feinstein said, “there’s little California can do to keep guns coming in from other states. Without stronger laws to prevent straw purchasing and close the gaping holes in our background check system, a presumptive murderer barely has to lift a finger to buy a gun.”

She slammed congressional Republicans and President Trump for “cowardice of epic proportions” in refusing to take on the gun lobby and ban military-style assault weapons and high-capacity magazines, among other measures.

“As long as they stand in fear of the NRA and worry more about the power of the gun lobby than the lives of their fellow citizens, we’ll see more Thousand Oaks, more bodies lying at the foot of failed Republican leadership,” Feinstein said.

Here we are, once more. Half mortified, half numb. Waiting to hear the names of innocent fellow citizens who were slaughtered. And wondering how much more blood will spill before we do the obvious, simple, humane things necessary to save lives.