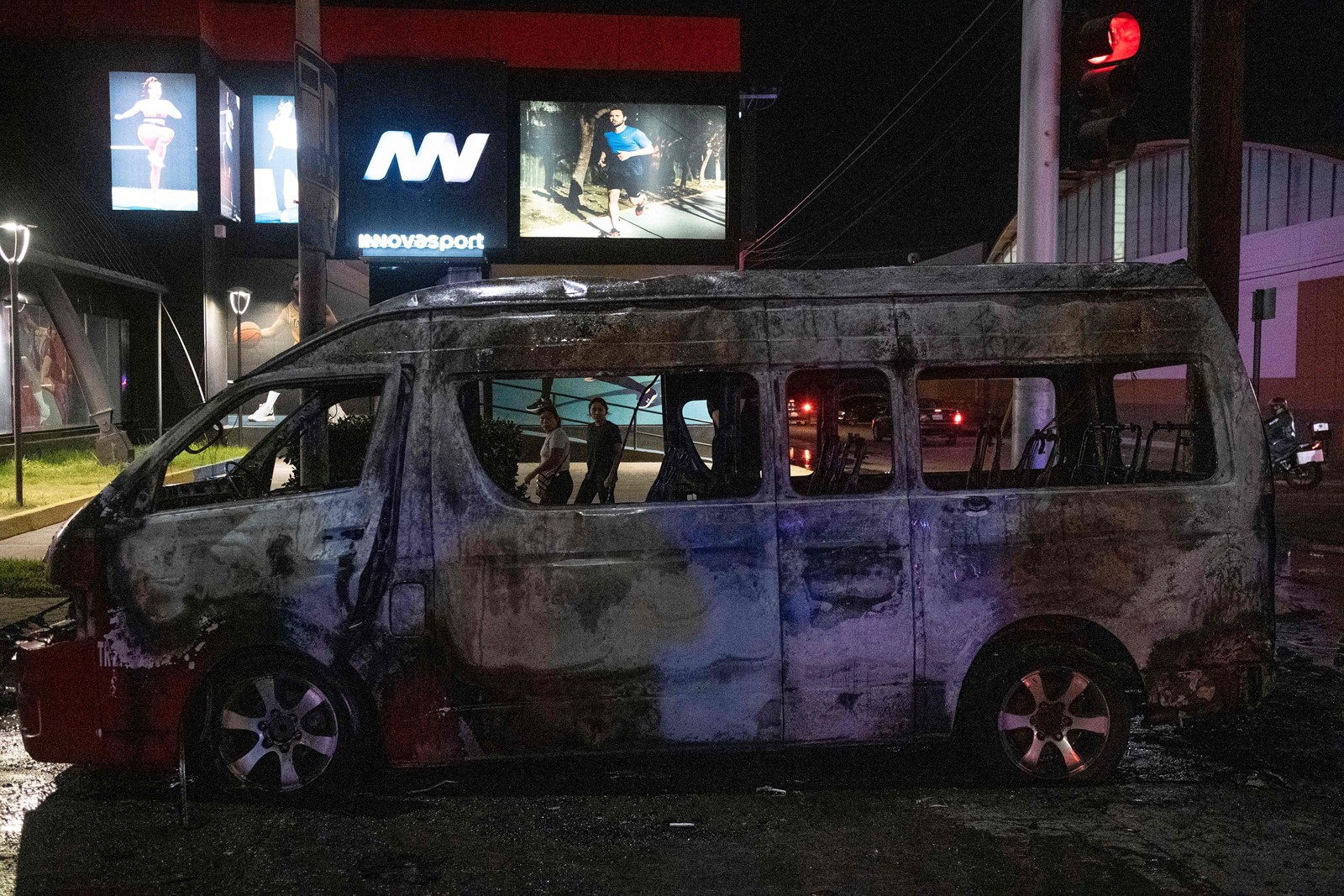 The Mexican border cities of Tijuana, Mexicali, Rosarito and Ensenada were hit by gang violence that included vehicles being set ablaze and road blockades.

The U.S. Consulate in Tijuana instructed its employees “to shelter in place until further notice” because of the violence.

It was the third time in a week that Mexican cities have seen widespread arson and shootings by drug cartels. The gangs appear to be targeting stores, vehicles and innocent bystanders in response to disputes or attempts to capture gang members.

Baja California state officials said 24 vehicles had been hijacked and burned at different points throughout the state: 15 in Tijuana, three in Rosarito and two each in Mexicali, Ensenada and Tecate.

Tijuana Mayor Montserrat Caballero blamed it on disputes between drug gangs and asked them to stop the violence.

Caballero issued a public appeal to “organized crime,” the term used in Mexico for drug cartels, to stop the growing trend of targeting innocent civilians.

“Today we are saying to the organized crime groups that are committing these crimes that Tijuana is going to remain open and take care of its citizens,” Caballero said in a video, “and we also ask them to settle their debts with those who didn’t pay what they owe, not with families and hard-working citizens.”

The extent of the violence was still unclear Saturday. Late Friday, the U.S. Consulate in Tijuana said in a statement that it “is aware of reports of multiple vehicle fires, roadblocks and heavy police activity in Tijuana, Mexicali, Rosarito, Ensenada and Tecate.”

On Saturday, few people ventured out in Tijuana and many of the bus and passenger van services stopped running, leaving some residents unable to get where they were going.

“Let them fight it out among themselves, but leave us alone,” said Tijuana resident Blanca Estela Fuentes, as she looked for some means of public transport. “So they kill each other, they can do whatever they want, but the public, why are we to blame?”

The federal public safety department said one person was wounded in the violence and that federal, state and local forces had detained 17 suspects, including seven in Tijuana and four each in Rosarito and Mexicali.

The mayor’s comment about Tijuana remaining open was an apparent reference to the border city of Ciudad Juarez, across from El Paso, where some classes and public events were canceled after similar violence Thursday.

On Tuesday, drug cartel gunmen burned vehicles and businesses in the western states of Jalisco and Guanajuato in response to an attempt to arrest a high-ranking leader of the Jalisco cartel.

Oxxo, a national chain of convenience stores owned by Femsa, the country’s largest bottling company, said 25 of its stores in Guanajuato — which borders Jalisco, home to the cartel of the same name — were either totally or partly burned Tuesday.

The area around Tijuana, which borders Southern California, is a lucrative drug-trafficking corridor long dominated by the Arellano Felix cartel but that has since become a battleground among various gangs, including the Jalisco and Sinaloa cartels.

Speaking about the Ciudad Juarez violence on Thursday, President Andrés Manuel López Obrador said: “They attacked the civilian, innocent population like a sort of revenge. It wasn’t just a clash between two groups, but it got to the point where they began to shoot civilians, innocent people. That is the most unfortunate thing in this affair.”

Four employees of the MegaRadio station who were broadcasting a live promotional event outside a pizza store in Ciudad Juarez were killed in the shootings.

Such random violence is not without precedent in Mexico.

In June of last year, a rival faction of the Gulf cartel entered the border city of Reynosa and killed 14 people the governor identified as “innocent citizens.”

Cartels in Mexico frequently hijack vehicles and burn them to distract police or prevent them from pursuing gunmen.