to cut off U.S. aid to nations that can’t stop ‘people from leaving.’ 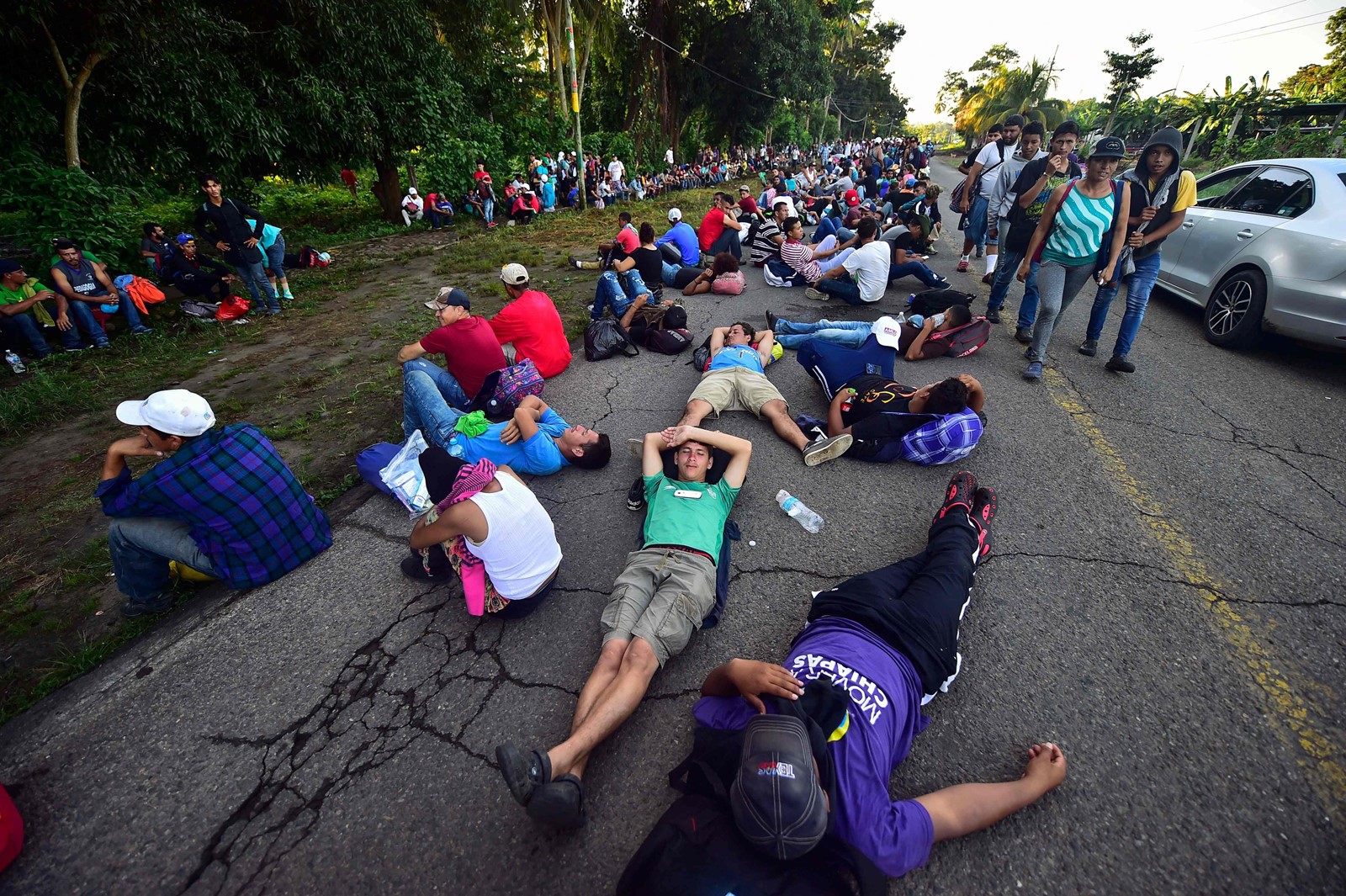 A caravan of immigrants continued its march north into Mexico on Monday, even as President Trump criticized the Mexican government and threatened to cut off aid to three Central American nations for allowing their people to leave.

The caravan has swelled to several thousand people, most of them from Honduras, and has provided Trump with an issue certain to rally his Republican base around the need for tighter immigration enforcement. But the northward-bound immigrants expressed little awareness of U.S. politics, and insisted that they were only trying to escape violence, corruption and poverty.

“This is nothing against President Trump,” said Jose Rodriguez, 29. “We respect President Trump. This is about us Hondurans and the impossible lives we face, with violence and poverty, and the chance for a better life in the United States.”

Trump warned on Twitter that the U.S. “will begin cutting off, or substantially reducing,” aid to Guatemala, Honduras and El Salvador for failing to prevent the caravan from heading north. He tweeted that the three countries “were not able to do the job of stopping people from leaving their country,” although only a few nations in the world prevent their citizens from freely leaving.

He also scorned Mexico, which has allowed thousands of immigrants to illegally enter its territory in recent days and now appears to be allowing them to march en masse toward the U.S. border. Trump said Monday that he has alerted the U.S. military and U.S. Customs and Border Protection that the caravan represents a “national emergency.”

Members of the caravan spent Sunday night curled up in the central plaza, parks and other sites in the subtropical city of Tapachula. Shortly before noon Monday, in humid, 90-degree heat, most of the group set out on foot to reach the town of Huixtla, 25 miles north.

“Men at the front, women and children to the rear,” shouted an organizer with a megaphone.

A few hours later, the caravan endured its first confirmed fatality, when a young man was hit by a vehicle on a four-lane highway about 10 miles north of Tapachula.

Fatigued after so many days of travel, many caravaners had begun jumping into passing pickup trucks and grabbing on to the backs of semi-trailers.

The victim was not immediately identified, but he looked to be about 21 years old. His body lay on the road in the bright sun, covered with a white sheet patterned with flowers. His bloodied baseball cap was next to him and his right shoe was missing, revealing a black sock full of holes.

A group of stunned caravan members stared in shock.

“He was like all of us, someone seeking a better life for himself and his family,” said a shaken Edin Mata, 21. “He could have been me or my brother.”

Mata said he was deported from Florida six months ago after living in the U.S. for three years.

“Of course I want to go back — at least in the United States one can make a life, earn well, be safe. That’s what we all want,” he said. He pointed at the dead man sprawled on the highway. “That’s what he wanted.”

As the afternoon wore on and the sun began to dip in the west, caravaners stopped along the road, clearly exhausted, about 12 miles short of Huixtla. Many families threw blankets outside an immigration office at a checkpoint on the Pan American Highway. No Mexican authorities were checking documents at the checkpoint, which was closed.

“We are tired, it has been a long trip, especially with the children, but they seem to be holding up,” said Keila Montoya, 33, who had traveled overland from Honduras with three children, ages 1 to 10.

The specter of masses of poor immigrants streaming into developed nations in the West has long been a potent image in anti-immigrant circles. French author Jean Raspail’s 1973 fantasy novel, “The Camp of the Saints,” imagines masses of people from the Indian subcontinent overwhelming Western Europe while liberals look on and allow it to happen. The blatantly racist novel is seen by some who favor strict immigration policy as prescient.

Trump has stoked fears about the caravan at several rallies across the country in recent days.

“It looks like the people are walking right through the middle of Mexico,” Trump said Monday at an event in Texas in support of Republican Sen. Ted Cruz.

Of Guatemala, Honduras and El Salvador, Trump said: “They’re paid a lot of money every year, we give them foreign aid, and they did nothing for us. Nothing.”

The president claimed on Twitter that the caravan includes criminals as well as “unknown Middle Easterners,” although there is no evidence to support that.

A State Department spokesperson, speaking on background, suggested that there were political motives behind the caravan, saying, “This caravan did not form spontaneously.

“We understand there are reports that Honduran opposition parties played a key role in the organization of the caravan,” the official said. “We are concerned the individuals in this caravan have been lured by migrant smugglers to make this journey, and may be exploited at great risk to themselves and their families.”

But many said they’ve left Honduras simply because life there has gotten harder in recent years.

Like neighboring El Salvador, Honduras is one of the deadliest places in the world that isn’t a war zone, with homicide rates many times those in the U.S.

Corruption is endemic — members of the country’s political class have been caught protecting drug traffickers — and the rule of law is nearly nonexistent, with the vast majority of crimes resulting in impunity.

It is impossible to live with such instability, said caravan member Jose Antonio Lopez, 36. He once ran a small grocery store in San Pedro Sula, Honduras, but he couldn’t make a living, he said, because gang members constantly demanded extortion payments.

“One group comes one day and makes you pay, and the next day another group demands money,” Lopez said. “If you don’t pay, they kill you and your family. They have no qualms about it.”

“I’ve never been to the United States, but everyone says you can lead a decent life there,” said Selvin Morales, 28, who made about $200 a month as a construction worker in Honduras.

In fiscal years 2016 and 2017, Congress allocated a total of $432 million in assistance for Guatemala, $391 million for Honduras and $302 for El Salvador, according to the Washington Office on Latin America, a think tank that tracks spending.

It was unclear whether Trump would be able to follow through on his threats to cut aid to Honduras, Guatemala and El Salvador. Although U.S. presidents have significant foreign policy powers as a general matter, foreign aid is provided by law enacted by Congress and would have to be changed by law.

Rep. Eliot L. Engel (D-N.Y.), who sits on the House Foreign Affairs Committee, said Monday that he would work to ensure that Trump does not act without congressional approval.

“Fortunately, Congress — not the president — has the power of the purse,” Engel said in a statement.

Last week, Trump threatened to scrap a free trade agreement if Mexico did not stop the caravan.

Under pressure from one of his country’s most important economic allies, Mexican President Enrique Peña Nieto has said repeatedly that no migrants will be allowed to enter the country in an “irregular” manner.

But the large number of caravan members marching through Mexico on Monday suggested that many thousands had. Gerardo Hernandez, head of the civil protection agency in the municipality of Suchiate, said that as of Saturday night, at least 7,233 immigrants who crossed illegally had been registered at a shelter in Ciudad Hidalgo, a Mexican border town.

While the large group making its way through Mexico captured international attention, another caravan of migrants from Honduras was heading north. At least 1,000 have crossed into Guatemala in recent days, heading for the Guatemala-Mexico border.