U.S. foreign policy analysts are less impressed with the outcome of his talks with Kim Jong Un. 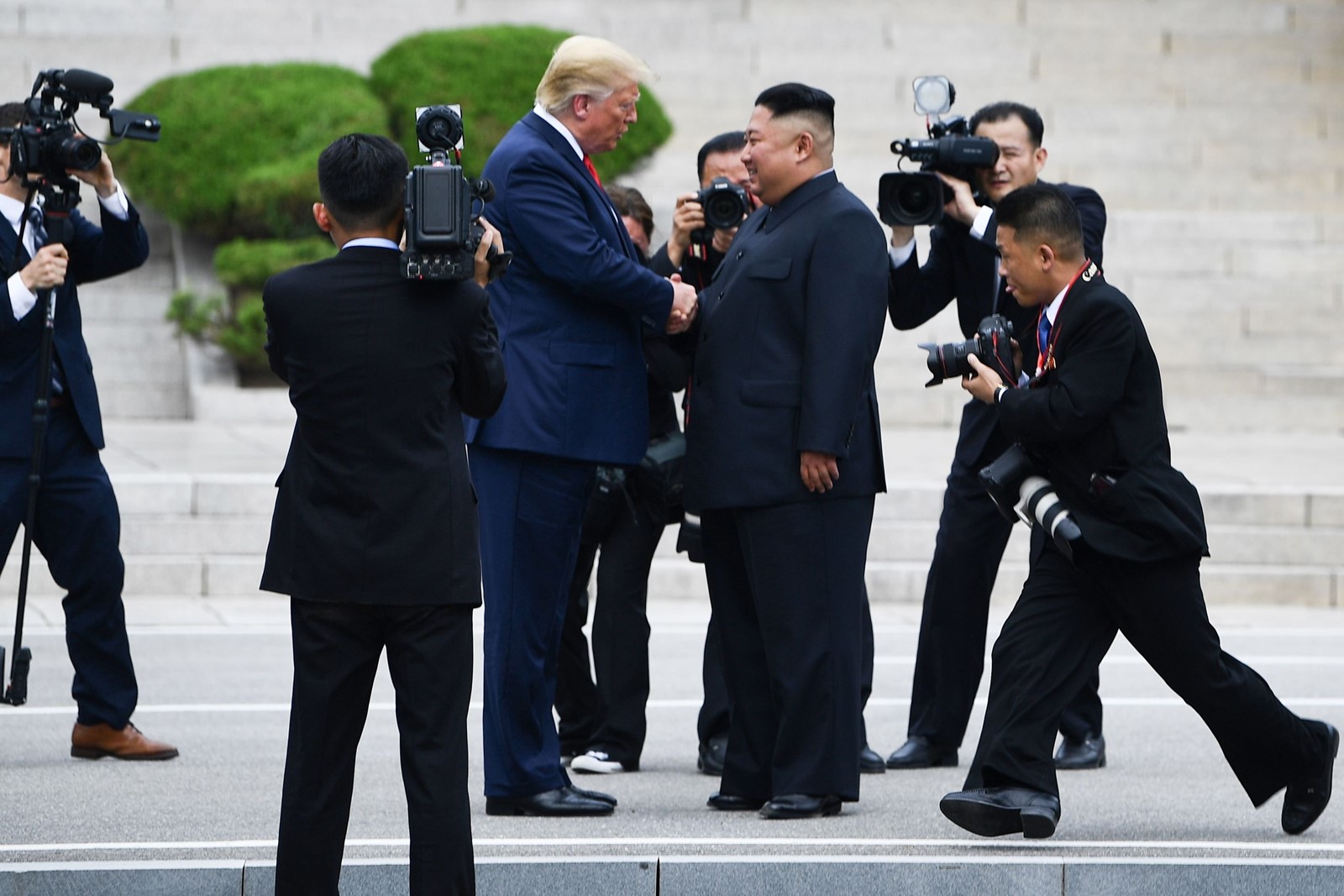 Moments before his meeting with Kim Jong Un, as President Trump stared into North Korea for the first time, he still nursed a familiar grievance: The media don’t appreciate his accomplishments.

Standing atop an observation point on the South Korean side of the demilitarized zone, Trump listened as a general briefed him on the military significance of the location. Then he gave his own assessment, in which he played a central role.

“There was great conflict here prior to our meeting in Singapore,” Trump said, referring to his first summit with Kim last year. “Tremendous conflict and death, all around them. And it’s now been extremely peaceful. It’s been a whole different world.”

“I say that for the press,” he went on. “They have no appreciation for what is being done, none. There was great conflict here prior to our meeting in Singapore. After our first summit, all of the danger went away.”

Trump called his impromptu meeting with Kim, in which he became the first U.S. president to set foot in North Korea, “historic” and “very legendary.”

Samantha Vinograd, who served on the National Security Council under President Obama, said Trump had in effect moved his own goalposts backward, tacitly walking away from his initial demand for complete and verifiable denuclearization of the Korean peninsula.

“By shaking hands with Kim Jong Un at the DMZ with no preconditions attached, he’s really signaling that his metric for success at this point is the status quo, which is no long-range missile tests and no nuclear tests,” but with North Korea keeping its nuclear arsenal, she said.

“Kim has no reason to denuclearize, but every reason to push Trump for what he’s wanted all along, phased sanctions relief.

“North Korea under Trump is a normalized, nuclear power.”

A year after Trump’s first meeting with Kim, in Singapore, North Korea remains a dangerous adversary. Kim’s government has continued to develop its nuclear stockpile, which is larger and more powerful now than when Trump took office.

The North Koreans have stopped testing long-range missiles that have the potential to reach U.S. territory, but have not dismantled them and continue to test missiles that appear designed to evade U.S. defenses and could threaten Japan and South Korea.

And even some of Trump’s top advisors doubt the North Koreans will ever agree to the U.S. demand that they give up the nuclear weapons that generations of the Kim family have pursued as the ultimate guarantee of their rule.

The practical upshot of Trump’s 53-minute meeting with Kim was an agreement to restart nuclear talks. The two sides would resume working-level discussions, Trump said — in effect a return to where negotiations stood 15 months ago.

Trump did not say whether he and Kim discussed the economic sanctions that severely restrict North Korea’s exports and bar key imports, including oil. So far, the U.S. has said those won’t be lifted unless North Korea denuclearizes. Trump indicated the sanctions could be part of talks as negotiations resume.

“Sanctions remain, yes, but at some point during the negotiations, things can happen,” he said. “At some point, look, I’m looking forward to taking them off.”

That’s a softer stance than Trump took at his previous meeting with Kim in Hanoi, when he walked out after Kim made an offer to dismantle only one part of the North’s extensive complex of nuclear facilities. At those talks, Secretary of State Michael R. Pompeo and national security advisor John Bolton, who are more hawkish toward North Korea than the president, were involved.

Bolton was far away, en route to a meeting in Mongolia on Sunday when Trump and Kim met. Pompeo accompanied Trump to South Korea, and the president’s daughter Ivanka and son-in-law, Jared Kushner, joined him in crossing the border into North Korea, an experience that Ivanka Trump later called “surreal.”

Pompeo told reporters traveling with him that if Trump’s action was a gamble, “it worked.”

“The president, by getting together with Chairman Kim today, broke through and was able to get us the opportunity to get back to the negotiating table,” he said. “It’s good for North Korea, it’s good for America, good for the world.”

Pompeo said he expected the working-level talks to begin around mid-July in a place to be determined. The U.S. delegation will be led by special representative Stephen Biegun, and the North Korean side will be represented by a Foreign Ministry official, possibly the foreign minister, Pompeo said.

For Trump, however, the details of denuclearization talks took second place to shaping public perceptions of his unorthodox diplomacy. He boasted that “tremendous things are happening,” and even as he insisted he’s in no hurry to cement a final agreement, he continued to carp at the media for refusing to join in the hagiography he relishes.

In his own version of the story, the Korean peninsula was “a fiery mess” until his election, which has brought about “two and a half years of peace.”

“You don’t report it accurately, but that’s OK,” Trump said to reporters after his talk with Kim had concluded. “Someday history will record it accurately.”

Democratic presidential hopeful Sen. Amy Klobuchar of Minnesota, interviewed on CNN, said Trump’s diplomacy with North Korea had little to show for itself.

“We’ve seen a history here,” she said. “Donald Trump announces these summits and nothing really comes out of it.”

South Korean President Moon Jae-in, by contrast, who has staked his presidency on improving relations with North Korea, appeared eager to stoke Trump’s assessment of his role.

“I’d like to pay my tribute to the creative and bold approach that President Trump has demonstrated,” Moon said after waiting in a separate room at the DMZ as Trump and Kim met.

“This has presented a big hope for the 80 million Korean people as well as the people of the whole world.”

The intensity with which the president tried to drive home his preferred narrative only highlighted how much he felt the need to do so — to proclaim a version of events that offers more than the reality that, after three meetings, North Korea continues to be a nuclear state, one that Trump himself has now legitimized on the world stage.

Kim has taken maximum advantage of Trump’s willingness to meet. At the DMZ, a coterie of North Korean state media accompanied him. They jostled with American and South Korean journalists to capture images of Kim once again walking shoulder to shoulder with Trump and the U.S. president stepping across the border.

The images and video from the meeting will boost Kim domestically, making up for the embarrassment he suffered after returning from February’s summit in Hanoi empty-handed.

Before heading to the DMZ, Trump bristled when asked what Kim had done in the four months since then to deserve another face-to-face meeting with the president.

Reminded by a reporter that Kim has continued to launch short-range missiles in recent months, Trump brushed off the tests.

Asked by another reporter if he was able to determine whether Kim had executed his former lead negotiator, which some South Korean media had reported, Trump couldn’t say for sure the status of the North Korean team.

At the end of his three-day Asia trip, before boarding Air Force One to return to Washington, Trump found a receptive audience for his version of events when he addressed troops at Osan Air Base south of Seoul.

He began his remarks by recounting his meeting with Kim, repeating his claim that the meeting came together in a day after he suggested the DMZ rendezvous in a tweet Saturday morning and again celebrating his handshake diplomacy as a major breakthrough.

“I actually stepped into North Korea and they say it’s a very historic moment,” Trump said.

Treating the speech to troops much like a campaign rally, Trump bashed Democrats, cursed and used a familiar and suspicious trope — claiming that some unidentified people had been deeply moved by his presence.

“Many people, I noticed, from Korea were literally in tears,” Trump said.