‘Safe third country’ approach would have prevented thousands of migrants from filing claims to cross border. 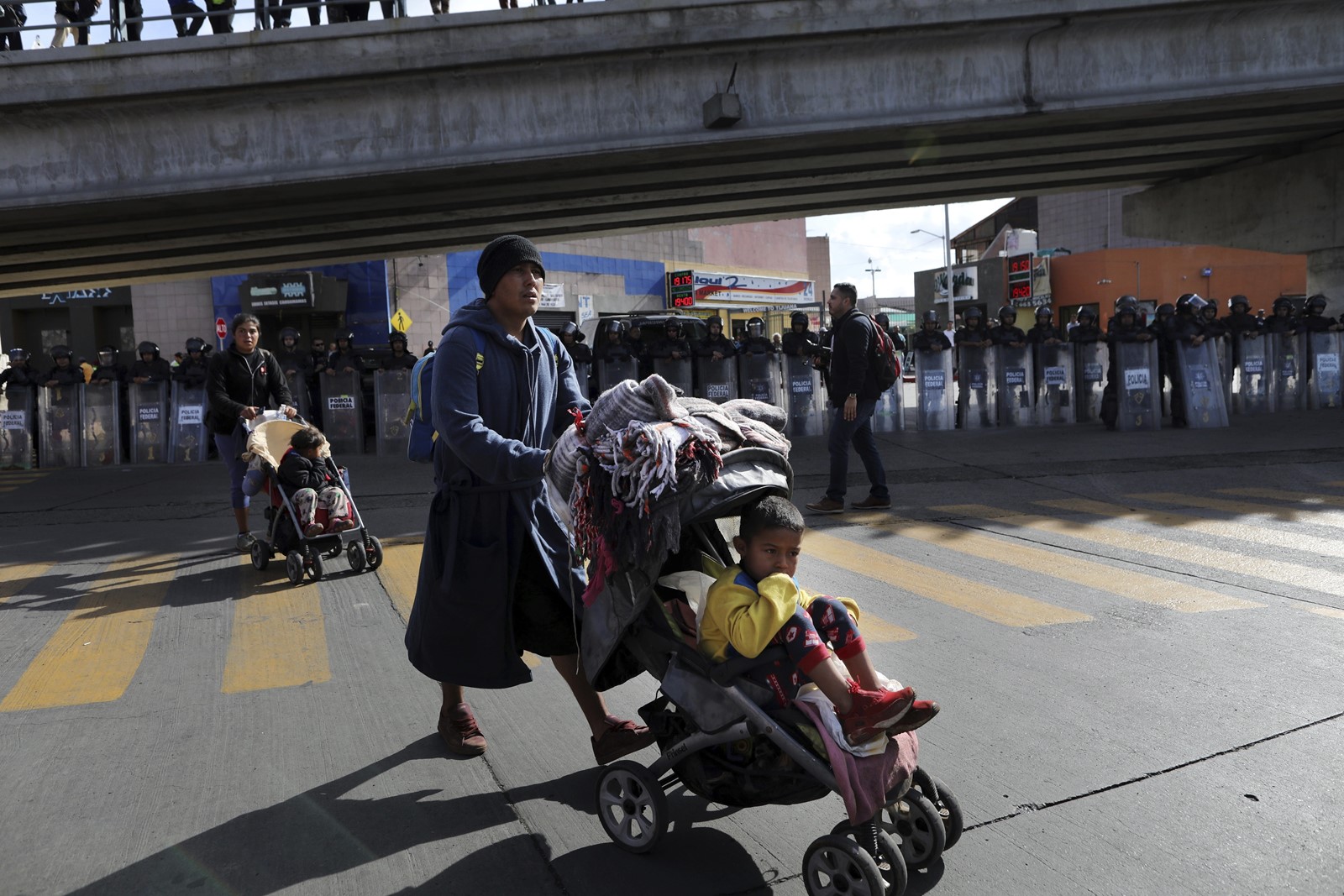 POLICE in riot gear stand by at the border crossing in Tijuana. Over 6,000 migrants have arrived in Tijuana and Mexicali this month. (Rodrigo Abd Associated Press)
PREVIOUS IMAGE

Mexico’s incoming leadership is denying a published report that it had agreed to a Trump administration proposal requiring asylum seekers arriving at the southwest border to wait in Mexico as U.S. authorities consider their claims for safe haven.

The Washington Post reported Saturday that Washington had won the support of the government of Mexican President-elect Andres Manuel Lopez Obrador — who takes office on Dec. 1 — for a plan mandating that asylum seekers at the border remain in Mexico as their claims move through the U.S. immigration system.

The Trump administration has long sought such an accord with Mexico as a means of resolving what it has termed a “crisis” of an escalating number of Central American asylum applicants — and limited detention space in which to hold them on U.S. territory as their petitions are considered.

Critics on both sides of the border have long assailed the notion of Mexico serving as a way station or detention grounds for Central Americans and others applying for asylum in the United States.

But the Post quoted Olga Sanchez Cordero, Mexico’s interior minister-designate, as saying Mexico’s new government had accepted the policy as a “short-term solution” to the issue of Central American migration — which has been dramatized in recent weeks as thousands of U.S.-bound Central Americans have made their way north through Mexico in caravans.

Later Saturday, however, she denied that Mexico had agreed to host people seeking U.S. asylum as their cases awaited judgment.

“There is no agreement of any sort between the future Mexican federal government and the U.S.,” the incoming interior minister said in a statement.

Moreover, she said Mexico’s new government had rejected any deal in which Mexico would be considered “a safe third country” for U.S. asylum applicants.

In a Twitter message on Saturday, President Trump reiterated threats to close the southern border — threats that have alarmed many in Mexico, since cross-border trade is a mainstay of the Mexican economy.

In his tweet, Trump also said migrants would not be allowed into the United States “until their claims are individually approved in court.”

Others, he said, would “stay in Mexico,” he added, without elaboration.

The Twitter message did not specify whether Washington had reached any kind of agreement with Mexico on the matter.

Only a small minority of Central American applicants are ultimately granted political asylum in the United States, but the decision-making progress can take months or years — during which time many are released and gain footholds in the United States.

Trump has vowed to end what he calls the “catch and release” system. “Our very strong policy is Catch and Detain,” he tweeted Saturday. “No ‘Releasing’ into the U.S.”

The White House has also pushed an alternative “safe third country” approach in talks with Mexican officials. Under such a plan, Central Americans seeking asylum would generally have to file for protection in Mexico, not in the United States.

The proposal is a variant of the Trump administration’s “remain in Mexico” plan, under which asylum seekers would wait in Mexico until their cases were adjudicated in the United States.

But immigrant advocates have long opposed such a designation for Mexico for a number of reasons — principal among them the country’s widespread and rising violence, which often targets Central American migrants. Mexico cannot be considered safe for asylum seekers, many argue.

In her statement, Mexico’s incoming interior secretary echoed the vows of leftist President-elect Lopez Obrador to protect the human rights of caravan travelers and other Central American migrants while providing them with food, healthcare and shelter. Lopez Obrador has also vowed to help Central Americans acquire work papers if they opt to remain in Mexico.

More than 6,000 caravan members, mostly Hondurans, have arrived this month in the Mexican border cities of Tijuana and Mexicali, posing a humanitarian, logistical and political challenge for the two cities on the border. The migrants say they are fleeing poverty and violence in their homelands.

Tijuana’s mayor declared a “humanitarian crisis” Friday as the border city sought additional federal and state aid to help house the migrants, most of whom are crowded into a sports complex a block from the U.S.-Mexico border fence.

Tijuana officials anticipate that as many as 10,000 Central American migrants could eventually converge on the city and be stuck there for months as they seek to file asylum claims in the United States, a time-consuming process. U.S. officials at the San Ysidro crossing generally accept no more than 100 asylum applications a day.