A rare spot at front of line for hospital custodial staff 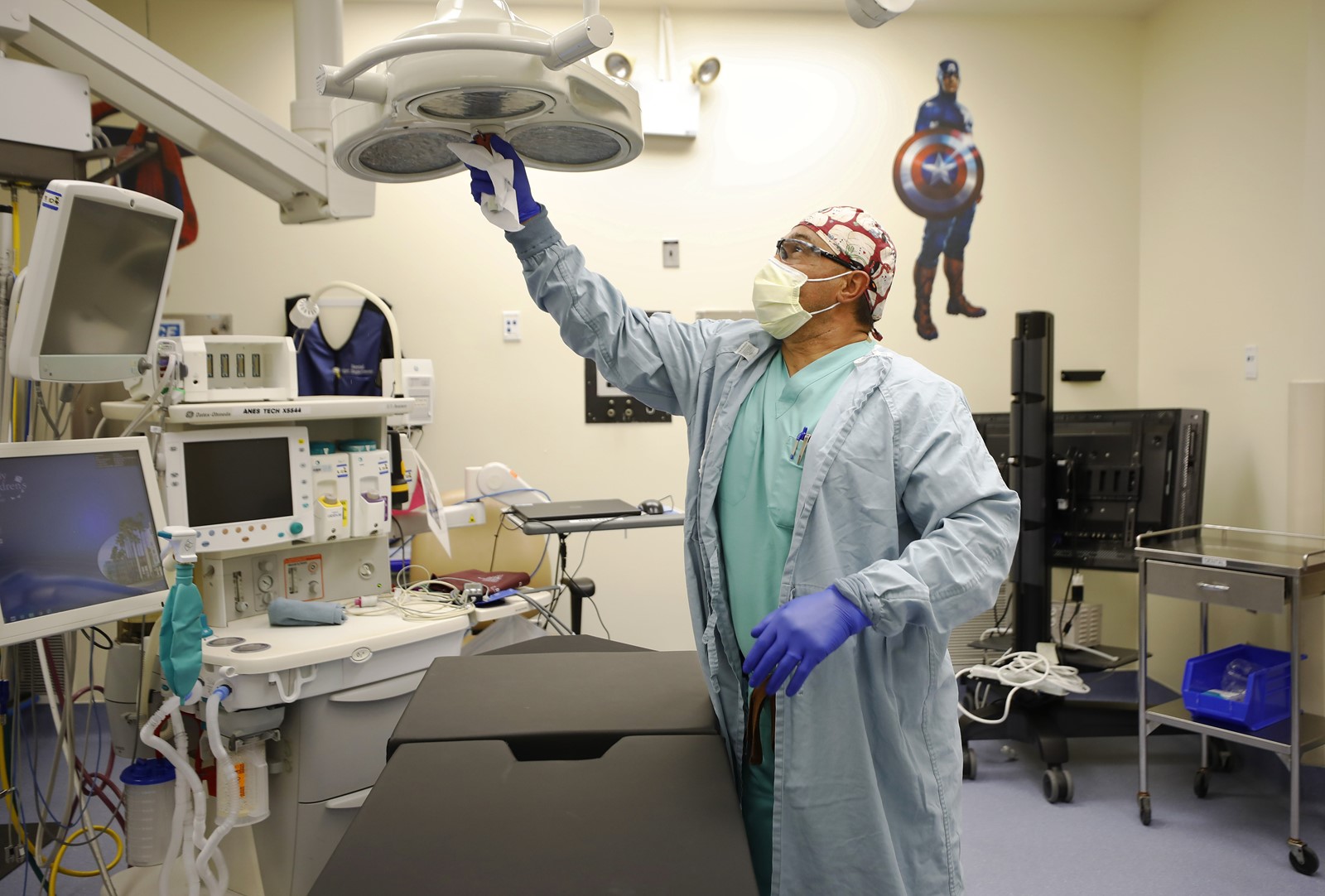 JESSE GONZALEZ, an environmental services attendant at Rady Children’s Hospital in San Diego, was among the front-line workers there to get a Pfizer-BioNTech COVID-19 vaccine shot this week. (K.C. Alfred San Diego Union-Tribune) 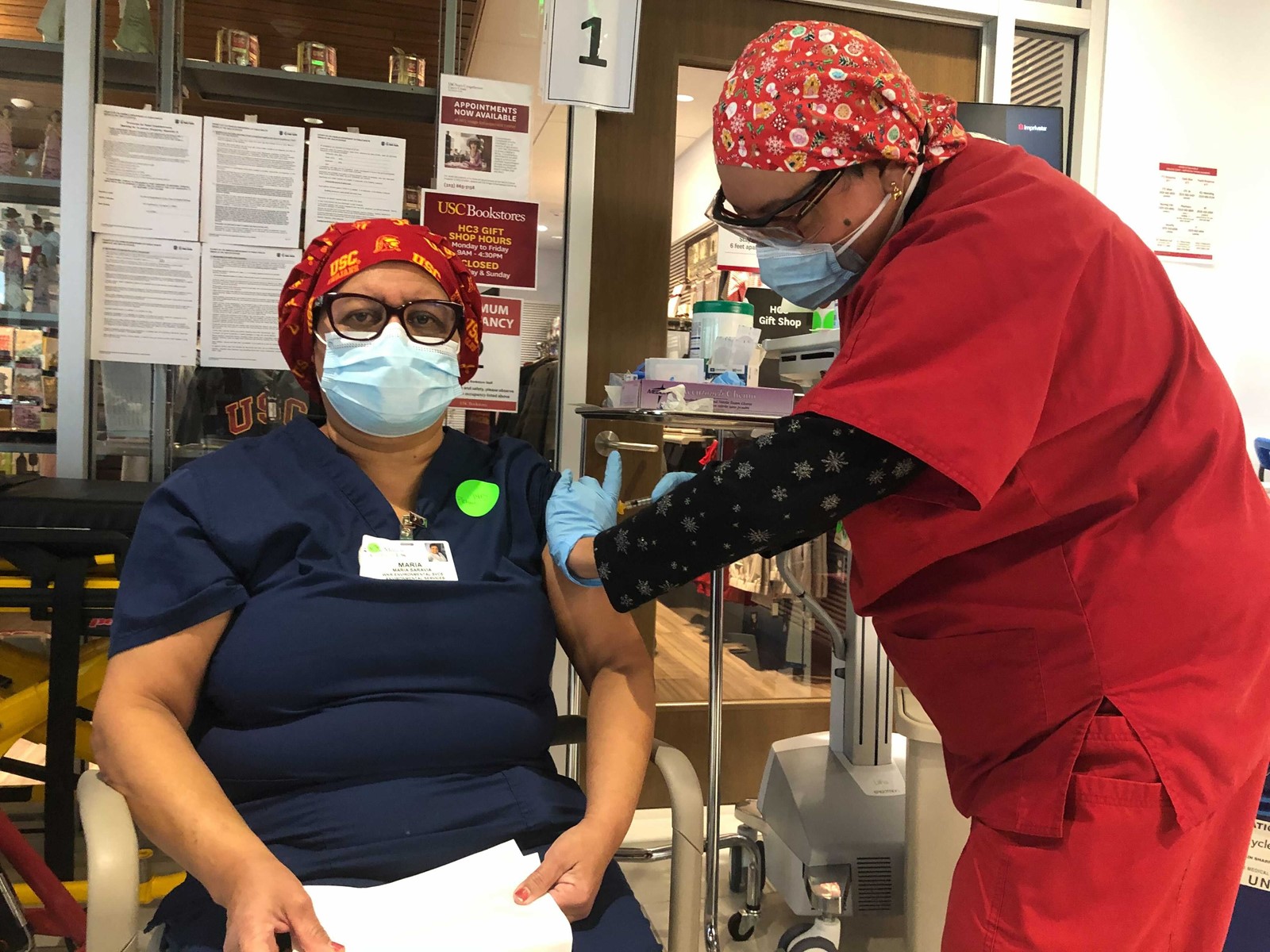 Maria Saravia changes in and out of protective gear 24 times a day — once for each patient room she enters on the COVID-19 floor at Keck Hospital of USC. She takes out biohazardous waste, freshens linens and sanitizes everything, down to the television remote.

At Rady Children’s Hospital in San Diego, Rosalina Baez knows which sign outside a child’s room signals a high-risk infection case, which could be COVID-19. She comforts parents and cracks jokes with their sons and daughters as she cleans bathrooms and mops floors.

These are the women and men who do the humblest work in hospitals filled with COVID-19 patients. But they are so integral to patient care that they were among the first to get inoculated this week as the vaccine developed by Pfizer and BioNTech rolled out across the country.

It was a rare moment at the front of the line for the housekeepers and custodians, known as environmental services workers, who are often an invisible shield between hospitals and disaster. They comfort adults and children, protect patients and staffers from the spread of infection and toil in a landscape of heartache and risk alongside nurses and doctors for a fraction of the pay — and none of the glory.

The unleashing of the vaccine has raised questions about its distribution: who will get it first and whether the rich, famous and powerful can cut to the front of the line. The hospital housekeepers’ moment in the spotlight of the vaccination of America is a small cosmic push in the direction of equity.

“Whether it’s that [environmental services worker] or it’s this top-notch physician, they are the same for us,” said Dr. Neha Nanda, medical director of infection prevention at Keck Medicine of USC. “Each person is equally important.”

Or as Dr. Robert Wachter, chairman of the Department of Medicine at UC San Francisco, tweeted Thursday evening, along with a photo of a custodian being inoculated: “How awesome that William received his vaccine before I did. The vaccine rollout is a window into the culture and priorities of an organization.”

On Thursday afternoon, Saravia waited inside USC’s Norris Healthcare Center with the left sleeve of her blue scrubs rolled up. She has worked at Keck Hospital of USC for 10 years.

In March, the 8-West COVID floor became her domain. She watched as the rooms filled. Most of the ailing people, like her, were Latino. Some recovered and left. “Others I’ve seen die,” she said.

The 56-year-old had been waiting for this moment since learning of the vaccine’s approval. The virus took her best friend in May and filled her with fear each time she returned to the Boyle Heights home she shares with two daughters and her parents, both in their 80s.

But when she talked to co-workers about getting vaccinated, some told her it would give her the virus, that she could get sick and die. She knew she needed to get it to “show my co-workers it’s important.” And to prove them wrong.

“I decided to do it for my family,” said Saravia, who began her career cleaning houses after emigrating from El Salvador in 1979. “For everyone’s.”

Environmental services workers clean areas throughout hospitals, including patient rooms, operating rooms and ancillary places like radiology, labs and pharmacies. They are tasked with discarding waste material, such as syringes.

For more than 20 years, Rosa Luna worked as a housekeeper at Riverside Community Hospital. She immigrated to the U.S. from the Mexican state of Zacatecas and “took great pride in disinfecting every inch” of a room, said her daughter Dora Reaza.

“She understood the risk of someone getting sicker from catching an infection in the hospital,” Reaza said. “She always thought, ‘What if it was one of my kids laying in the bed?’ ”

When Luna got home from work around midnight, she would strip, leave her shoes and backpack outside and immediately go inside and shower. She was the only one leaving the house to go to work, Reaza said.

In April, the 68-year-old tested positive for the coronavirus. She died May 4 of COVID-19 complications.

Last month, Baez, who works at Rady Children’s, and her husband tested positive for the virus. They believe he contracted it while working his landscape construction job and gave it to her. Their 19-year-old daughter, who lives with them, tested negative.

Baez, 51, who has worked at the hospital for 15 years, said she and her husband both lost their sense of smell for a month.

Her three children were happy that she was the first in the family to get vaccinated.

“We’re on the front lines,” Baez said. “We need to be protected so we can help these families and do the best job we can.”

The virus also hit close to home for Kant, the senior custodian at UC Davis Medical Center. His 36-year-old daughter, who worked in a Modesto hospital, died three months ago of COVID-19.

So there was no hesitation when Kant, who has worked at the medical center for 28 years, got vaccinated Tuesday at 11 a.m.

“I’m protecting myself, and I’m protecting the patients,” said Kant, who will receive his second shot Jan. 5. Like Saravia and Baez, Kant went right back to work after getting his vaccination.

Angela Balam, who works for Kaiser Permanente, didn’t tell her four children she was getting vaccinated until the deed was done. The 49-year-old shared the news via a screenshot of a Kaiser tweet with a photograph of her getting her injection.

Her children shared it on Snapchat and Instagram, thanking their mother for her hard work and calling her an inspiration. Only her youngest daughter sent her a text asking why she had volunteered, but later, the 21-year-old told her mother she was proud of her.

This year, Balam was among the first to interact with a COVID-19 patient at the hospital. As the patient was pushed through the hospital in a wheelchair, Balam followed closely behind, disinfecting.

She soon found herself sent to every room housing a COVID-19 patient. One day, she would speak to a patient; the next, the person would be intubated and silenced. She often worked 16-hour days, especially after her son lost his job due to the pandemic, making her the only breadwinner in the family.

“It doesn’t matter if they have COVID,” she said. “They deserve to have clean rooms, to be treated like any person who comes to the hospital.”

After emigrating from the Mexican state of Yucatan in 1990, Balam spent 20 years working in maintenance before landing her dream job at Kaiser in 2018.

She didn’t think twice before volunteering to get the vaccine. In fact, she was so eager Monday morning that she twice asked if it was her turn and was told, “Not yet.”

When she finally got the shot, she was flooded with emotions — it felt like “a door to the future.” In the last year, she’d watched co-workers and supervisors get sick. And amid the surge, she sees it happening again.

“We’re indispensable, just like any other person,” Balam said. “I want people to know that we exist, that we’re here. … All the departments are important, but so is ours.”