to reject his baseless claims, expert warns that the lawsuits are a danger to democracy. 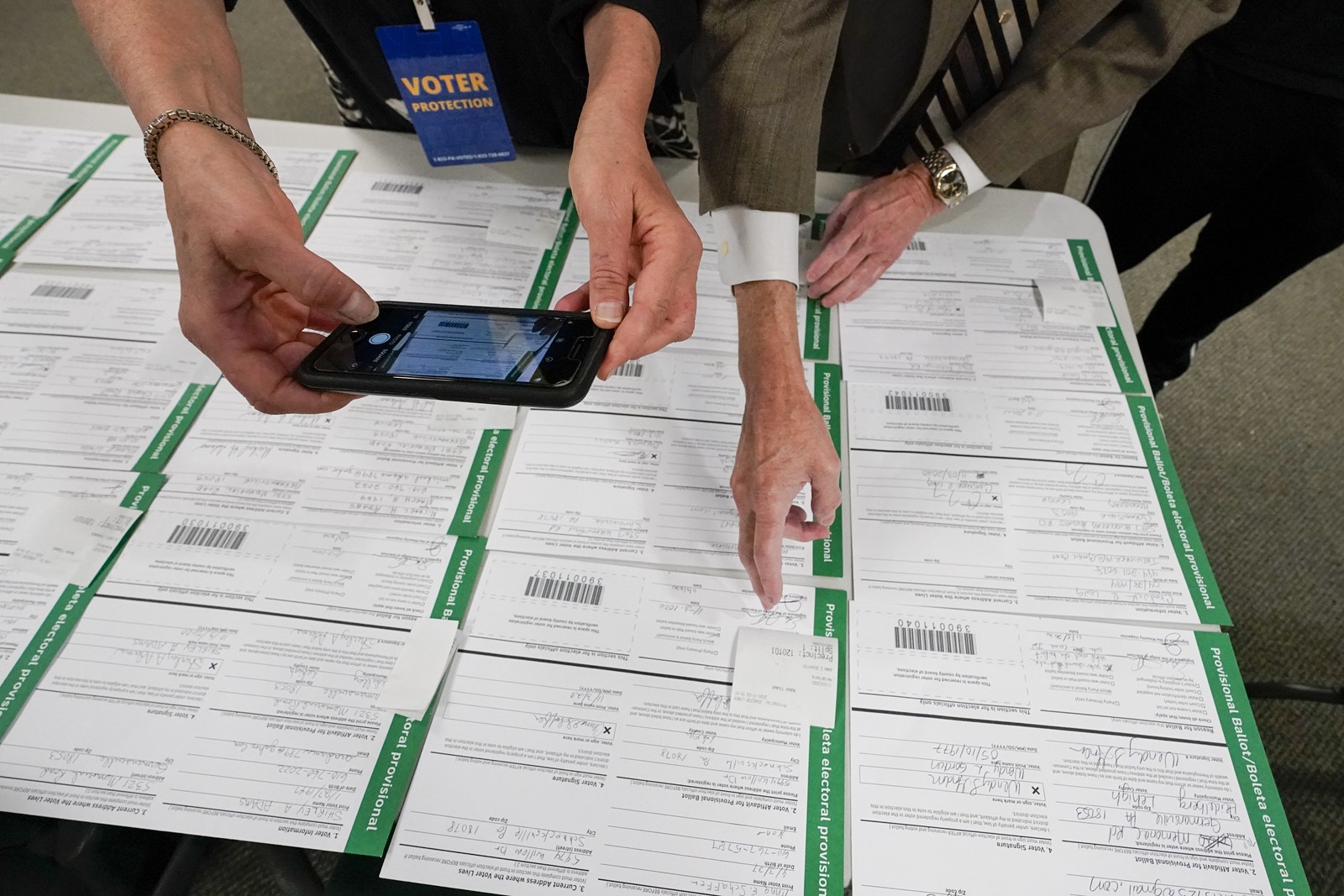 As they frantically searched for ways to salvage President Trump’s failed reelection bid, his campaign pursued a dizzying game of legal hopscotch across six states that centered on the biggest prize of all: Pennsylvania.

The strategy may have played well in front of television cameras and on talk radio to Trump’s supporters. But it has proved a disaster in court, where judges uniformly rejected their claims of vote fraud and found the campaign’s legal work amateurish.

Now, as the legal doors close on Trump’s attempts to have courts do what voters would not do on election day and deliver him a second term, his efforts in Pennsylvania show how far he is willing to push baseless theories of widespread voter fraud.

It was led by Rudolph W. Giuliani, Trump’s personal lawyer, who descended on the state the Saturday after the Nov. 3 election as the count dragged on and the president played golf.

Summoning reporters to a scruffy, far-flung corner of Philadelphia on Nov. 7, he held forth at a site that would soon become legendary: Four Seasons Total Landscaping.

The 11:30 a.m. news conference was doomed from the start.

Only minutes earlier, news outlets had started calling the presidential contest for Democrat Joe Biden. The race was over.

Just heating up was Trump’s plan to subvert the election through litigation and howls of fraud — the same tactic he had used to stave off losses in the business world. And it would soon spread far beyond Pennsylvania.

“Some of the ballots looked suspicious,” Giuliani, 76, said of the vote count in Philadelphia as he stood behind a chain link fence, next to a sex shop.

He maligned the city as being run by a “decrepit Democratic machine.”

He promised to file a new round of lawsuits. He rambled.

“It is a sideshow, but it’s a harmful sideshow,” Levitt said. “It’s a toxic sideshow. The continuing baseless, evidence-free claims of alternative facts are actually having an effect on a substantial number of Americans. They are creating the conditions for elections not to work in the future.”

Not a single court has found merit in the core legal claims, but that did not stop Trump’s team from firing off nearly two dozen legal challenges to Biden’s victory in Pennsylvania, including an early morning suit on election day filed by a once-imprisoned lawyer.

The president’s lawyers fought the three-day grace period for mail-in ballots to arrive.

They complained they weren’t being let in to observe the vote count.

Everywhere they turned, they said, they sniffed fraud.

“I felt insidious fraud going on,” Philadelphia poll watcher Lisette Tarragano said when Giuliani called her to the microphone at the landscaping company.

In fact, a Republican runs the city’s election board, and has said his office got death threats as Trump’s rants about the election intensified.

No judges ever found any evidence of election fraud in Pennsylvania or any other state where the campaign sued — not in Michigan, Wisconsin, Arizona, Nevada or Georgia.

Instead, Trump lawyers found themselves backpedaling when pressed in court for admissible evidence, or dropping out when they were accused of helping derail the democratic process.

“I am asking you as a member of the bar of this court, are people representing the Donald J. Trump for president [campaign] … in that room?” U.S. District Judge Paul Diamond asked at an after-hours hearing on Nov. 5, when Republicans asked him to stop the vote count in Philadelphia over their alleged banishment.

“There’s a nonzero number of people in the room,” lawyer Jerome Marcus replied.

The count continued in Philadelphia. The Trump losses kept coming.

By Nov. 6, when a state appeals court rejected a Republican complaint over provisional ballots and a Philadelphia judge refused to throw out 8,300 mail-in ballots they challenged, Biden was up by about 27,000 votes.

Nationally, the race had not yet been called. But it was becoming clear that a Biden win in Pennsylvania, with its 20 electoral votes, was imminent.

When it came, Trump quickly pivoted to litigation. It did not go well.

A U.S. appeals court found Pennsylvania’s three-day extension for mail-in ballots laudatory, given the disruption and mail delays cause by the COVID-19 pandemic.

Judges in Michigan and Arizona, finding no evidence of fraud, refused to block the certification of county vote tallies. Law firms representing the campaign started to come under fire and withdrew.

That left Giuliani, who had not argued a case in court for three decades, in charge of the effort to overturn the election.

“You can say a lot at a driveway [news conference].... When you go to court, you can’t,” said lawyer Mark Aronchick, who represented election officials in Philadelphia, Pittsburgh and elsewhere in several of the Pennsylvania suits.

“I don’t really pay attention to the chatter until I see a legal brief,” he said.

On Tuesday, Giuliani stepped into the courtroom. He was a late addition to the docket after election lawyers from Porter Wright Morris & Arthur had bowed out over the previous weekend. He had an entourage in tow, a show of force that had everything but a compelling legal argument.

Giuliani asked Brann to hold up the certification of the state’s 6.8 million ballots over two Republican voters whose mail-in ballots were tossed over technical errors.

“We were ready to argue the one count. Instead, he treated us to an even more expanded version of his Total Landscaping press conference,” Aronchick said. “It didn’t bear any relationship to the actual case.”

Giuliani, admired by some for his tough talk as Manhattan’s top prosecutor and his leadership as New York City’s mayor during the Sept. 11 terrorist attacks, struggled to answer even basic legal questions.

But he waxed on about a supposed conspiracy to rig the state election.

“The best description of this situation is widespread, nationwide voter fraud,” Giuliani argued. Under questioning, though, he acknowledged their complaint no longer included a fraud claim.

And then, just as it had at Four Seasons, reality came crashing down on him, when news broke in the courtroom that the Pennsylvania Supreme Court had rejected the campaign’s appeal over observer access in Philadelphia. It was one of the campaign’s last remaining claims.

Even the dissent was crushing.

“The notion that presumptively valid ballots cast by the Pennsylvania electorate would be disregarded based on isolated procedural irregularities that have been redressed ... is misguided,” Chief Justice Thomas G. Saylor wrote for the minority in the 5-2 decision.

Brann, who sits in Williamsport, let the federal court hearing drag on past the dinner hour and gave both sides time to file additional motions.

The campaign filings were replete with typos, spelling mistakes and even an errant reference to a “Second Amendment Complaint” instead of a second amended complaint.

The campaign took the opportunity to answer one of the more puzzling questions that its election challenge raised: It wanted only the presidential election results set aside, not votes on the same ballots for other offices.

The briefs were filed by Giuliani and co-counsel Marc Scaringi, a local conservative talk radio host who, before he was hired, had questioned the point of the Trump litigation, saying, “it will not reverse this election.”

“You’re going to suggest part of them are in a conspiracy? How does that work?” Aronchick asked. “Who? Where? When? How?”

Brann, in his ruling, said he expected the campaign to present formidable evidence of rampant corruption as it sought to nullify millions of votes.

Instead, he said, the campaign presented “strained legal arguments without merit and speculative accusations.”

Trump could appeal the ruling to the U.S. 3rd Circuit Court of Appeals in Philadelphia, but that court may have tipped its hand.

In its Nov. 13 ruling, the court called it “indisputable in our democratic process: that the lawfully cast vote of every citizen must count.”

Biden’s lead in the state has expanded to more than 80,000 votes.

“Our system depends on the possibility that you might lose a fair contest. If that possibility doesn’t exist, you don’t have a democracy,” said Levitt, the law school professor. “There are countries that run like that. It just doesn’t describe America.”