Bald eagles are back nesting in Orange County 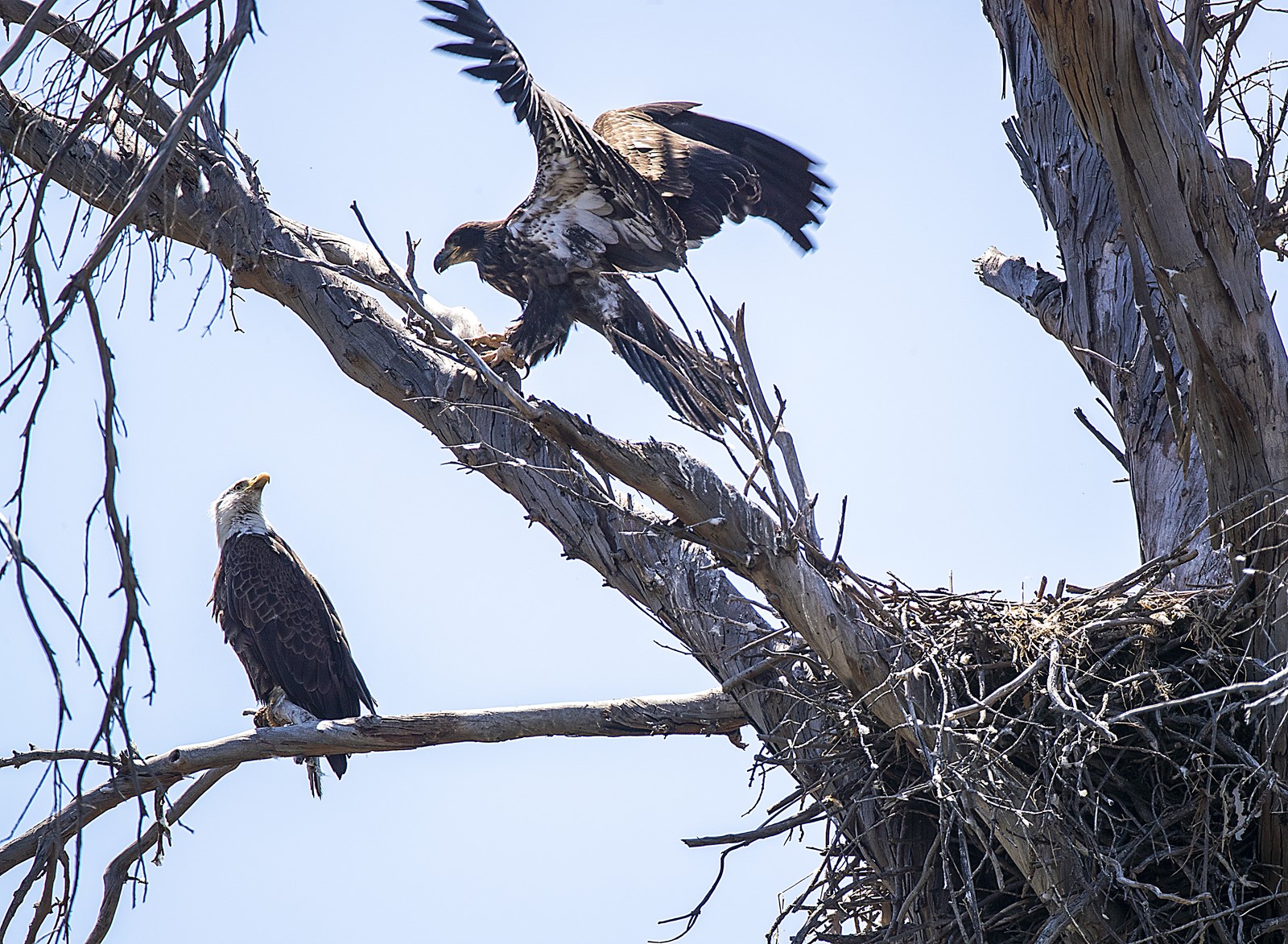 A MALE bald eagle, left, watches as one of two juvenile eagles flies to a branch from its nest high in a tree in a north Orange County backyard Wednesday. (Allen J. Schaben Los Angeles Times)
PREVIOUS IMAGE

For the last three years, two bald eagles have landed in a north Orange County neighborhood where they have built a nest and tended to eggs in an old dead tree near a gully.

As the world has grappled with the ongoing COVID-19 pandemic, the eagles’ recent arrival has been a source of optimism and joy for the neighborhood.

Cramer, 65, recently held a socially distanced viewing party in her backyard for neighbors who wanted to take a closer look at the eagles, which are perched in a tree about 25 feet from her property. Guests brought their own lawn chairs, fanned out and sat in the driveway to observe.

It’s not been uncommon for small groups of neighbors to gather for socially distanced cocktail hours and potlucks over the last several weeks, Cramer said. When a group watched the eagles fly over the neighborhood, Cramer suggested the next get-together take place at her home, where the birds are stationed.

Cramer has lived at her house with her husband for the last 22 years and said the eagles are the most majestic creatures she’s spotted in the area. An entrepreneur who typically works from home, even before California issued its stay-at-home orders, she has a clear view of the eagles from her work space allowing her to observe their whereabouts each day.

Carol Hemminger, another resident, has spotted hummingbirds, egrets, herons and hawks — but these are the only eagles she’s seen in the neighborhood in the three decades she’s lived there.

Hemminger, 68, is a retired chemist with Aerospace Corp. She spends much of her time outside — especially now, when so many social gathering spots are under lockdown.

“It’s certainly a stress reliever to be outdoors,” she said. “You can remember that not everything has been turned on its head.” She ventured to see the eagles for the first time in March. From her binoculars, she said she could also see two chicks in the nest.

“They were already big enough that you could see them popping up along the nest,” she said. The young birds hopped up on the limbs of the tree and craned their necks. On Monday, Hemminger visited the nest area again but didn’t see the young birds — a sign that they’ve probably taken flight.

Bald eagles typically live 15 to 20 years. Their first flights can start at nine or 10 weeks of age, according to the U.S. Fish and Wildlife Service.

The adult female’s wings are tagged, identifying her as a resident of the Channel Islands. Cramer believes that the birds, like whales that return to familiar waters, are attracted to the area’s wilderness, which is home to coyotes, possums, a riverbed of fish and plenty of creatures to catch.

The decline in traffic and the increase in people being at home for longer periods doesn’t seem to have affected the birds’ behavior, or that of any other creatures in the area, Cramer said.

“The animals can’t tell any difference.”