House impeachment managers use graphic video, ex-president’s own words in building a case against him. 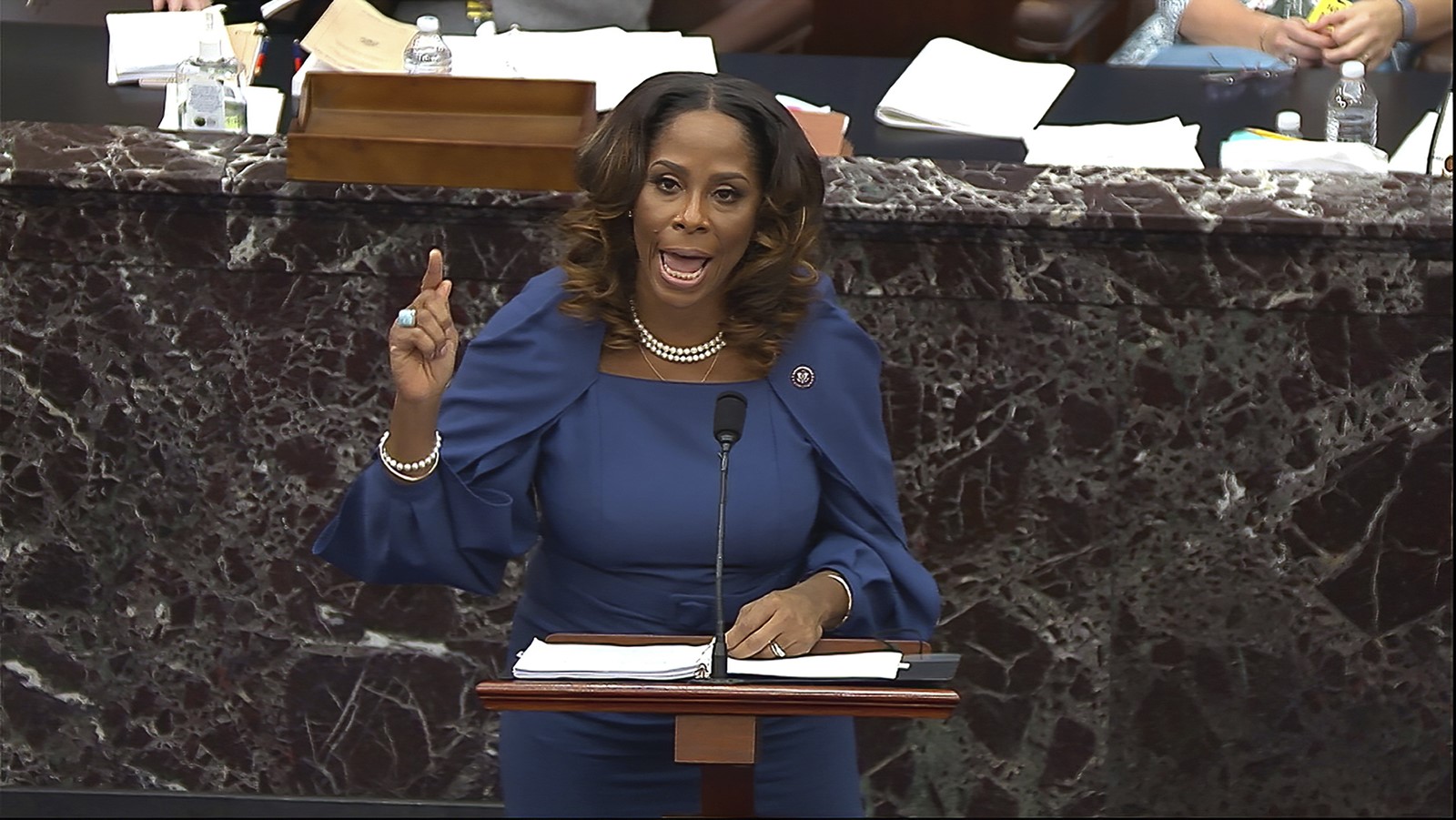 HOUSE DELEGATE Stacey Plaskett, one of the impeachment managers, told senators that the Jan. 6 rioters “were just feet away from one of the doors of this chamber, where many of you remained at that time.” (Senate Television )
PREVIOUS IMAGE

With graphic footage of the Jan. 6 attack on the Capitol and repeated use of former President Trump’s own words, House impeachment managers laid out their case Wednesday, accusing him of engaging in a “deliberate, planned and premeditated” effort to incite a mob to attack Congress.

The riot was foreseeable and intentional, House prosecutors said. In the words of one of the impeachment managers, Rep. Ted Lieu (D-Torrance), it came about because “President Donald J. Trump ran out of nonviolent options to maintain power.”

The prosecutors capped their arguments with previously unseen footage from Capitol security cameras and police body cameras, showing how close the mob came to catching members of Congress during the attack. One video showed Senate Democratic leader Charles E. Schumer of New York and his security detail evacuating up a hallway in the Capitol complex, then abruptly turning and scrambling the other way after officers realized they were heading toward the mob.

Another showed Capitol Police Officer Eugene Goodman stopping Sen. Mitt Romney (R-Utah), who was running down a Capitol hallway in the wrong direction toward the rioters. A few moments later, Goodman diverted rioters away from the Senate chamber, an act for which he has been widely hailed as a hero.

Romney told reporters that he learned only during the video presentation that Goodman was the officer who may have saved his life. The two were later seen by reporters talking on the Senate floor.

The rioters “were just feet away from one of the doors of this chamber, where many of you remained at that time,” House Delegate Stacey Plaskett of the Virgin Islands told senators as she presented the video.

During the opening minutes of the attack, Vice President Mike Pence, who had been evacuated from the Senate chamber, was in a room less than 100 feet from the attackers, Plaskett said as she played videos of rioters shouting, “Hang Mike Pence.”

The day’s arguments, and the video testimony in particular, served two purposes: reminding senators of how much Trump’s incitement of the mob put them and their staffs in personal danger, and shaping how the wider public sees the dramatic events.

Within the Senate, the video clearly had an impact. Earlier in the afternoon, some GOP senators had read paperwork or doodled on notebooks as House impeachment managers spoke, but during the video presentations, many stared intently at the screens set up in the chamber.

“It was extremely quiet. You could have heard a pin drop,” Sen. Susan Collins (R-Maine) said.

“The House managers are making a very strong case,” Sen. Lisa Murkowski (R-Alaska) said when the Senate recessed for dinner after seeing the videos. “The evidence that has been presented thus far is pretty damning.”

The evidence may not persuade enough Republican senators to change their minds and convict Trump. But whether he is convicted or not, Murkowski said, the effect on public opinion will be strong.

“After the American people sees the full story laid out here,” she said, “I don’t see how Donald Trump could be reelected to the presidency again.”

“They’ve done a good job connecting the dots,” he said. “I think they were very effective. I’ll see what kind of arguments that defense puts up. But, yeah, I’m going to listen and draw conclusions when it’s all done.”

Trump’s defense attorney Bruce Castor contended, however, that the House arguments had not changed the basics of the case. “We know a mob breached the Capitol and wreaked havoc in the building,” he said. “I’m waiting for them to connect that up to President Trump, and so far that hasn’t happened.”

Many Republican senators said they are sticking with their position that the Senate lacks authority under the Constitution to try Trump because he no longer holds office. The Senate on Tuesday rejected that position 56 to 44.

Sen. Lindsey Graham (R-S.C.) said he spoke with Trump on Tuesday night and stressed to him that enough Republican senators would stick with him to guarantee an acquittal.

“I reinforced to the [former] president, the case is over. It’s just a matter of getting the final verdict now,” Graham said.

“I want to say to the Republicans, ‘How do you live with yourself after watching all this if you’re not going to convict the guy?’ ”

She said she hadn’t been aware how close the mob came to the senators while they were evacuated.

Impeachment managers, who said they had not given up hope of persuading some additional Republicans to vote to convict, pursued two main lines of argument in addition to the emotional impact of the videos.

First, they sought to rebut the main legal defense mounted by Trump’s lawyers: that the president’s speech on the day of the riot, along with his other remarks, cannot be punished because his words are protected by the 1st Amendment.

The House prosecutors argued to the contrary, saying what Trump said and did specifically incited violence.

The chief impeachment manager, Rep. Jamie Raskin (D-Md.), in his speech opening the prosecution case, referred to a famous comment by Supreme Court Justice Oliver Wendell Holmes Jr. that the Constitution did not protect a person who falsely shouted “fire” in a crowded theater.

“This case is much worse,” Raskin said. “It’s more like a case where the town fire chief who’s paid to put out fires sends a mob not to yell ‘fire’ in a crowded theater, but to actually set the theater on fire” and then do nothing to put out the flames.

Second, the prosecutors sought to depict Trump’s remarks as part of an overall plan, starting months before the election, to prepare his supporters for violence in case he lost the vote.

“Just like a fire doesn’t begin with the flames, Donald Trump for months and months assembled the tinder, the kindling, threw on logs for fuel,” he said. He “was ready if he lost the election to light the match.”

Even on the day of the riot, Trump had the power — and a legal duty — to try to stop the violence by his supporters but failed to act, Rep. Joe Neguse (D-Colo.) said. “He alone had that power,” Neguse said. The rioters “believed they were following his orders.”

Rep. Joaquin Castro (D-Texas) showed video of leaders of the riot reading Trump’s Twitter statements through bullhorns to egg on the crowd, especially one tweet that criticized Pence. Trump could have tweeted an order to stop the violence, Castro said, but instead “he left everyone in this Capitol for dead.”

The impeachment managers also repeatedly depicted Trump as having crossed lines that other elected officials would not — an effort to convince Republicans that they can separate themselves from him.

“All of us in this room have run for election, and it’s no fun to lose,” Castro said. But, he said, elected officials know that when they lose, they have to accept the will of the voters, which Trump refused to do.

“What our commander in chief did was wildly different from what anyone here in this room did to raise election concerns,” Swalwell said.

In laying out their case, the impeachment managers’ immediate target is the senators sitting in front of them, evenly divided by party.

But Democrats know that, beyond the Senate, the arguments and, in particular, the video evidence can reach a broader public. Democratic campaign committees have invested heavily in an effort to convince voters that Trump and the Republicans who support him have sided with extremists. Further evidence of Trump’s complicity in the riot will reinforce that connection in voters’ minds, Democratic strategists believe.

That approach may already be succeeding, at least to some extent. Polling by Gallup released Wednesday showed that public support for the Republican Party had dropped since November, largely because a slice of people who used to identify as Republicans now have a negative view of the party.

Democrats said Wednesday that the impeachment managers were realistic about the political barriers they faced but still optimistic.

“We believe in the power and the strength of the overwhelming evidence in this case,” said a Democratic aide who briefed reporters before the day’s session. “And we believe that that evidence still has the power to persuade reluctant Republicans who were just now waking up from the grip of the former president.”