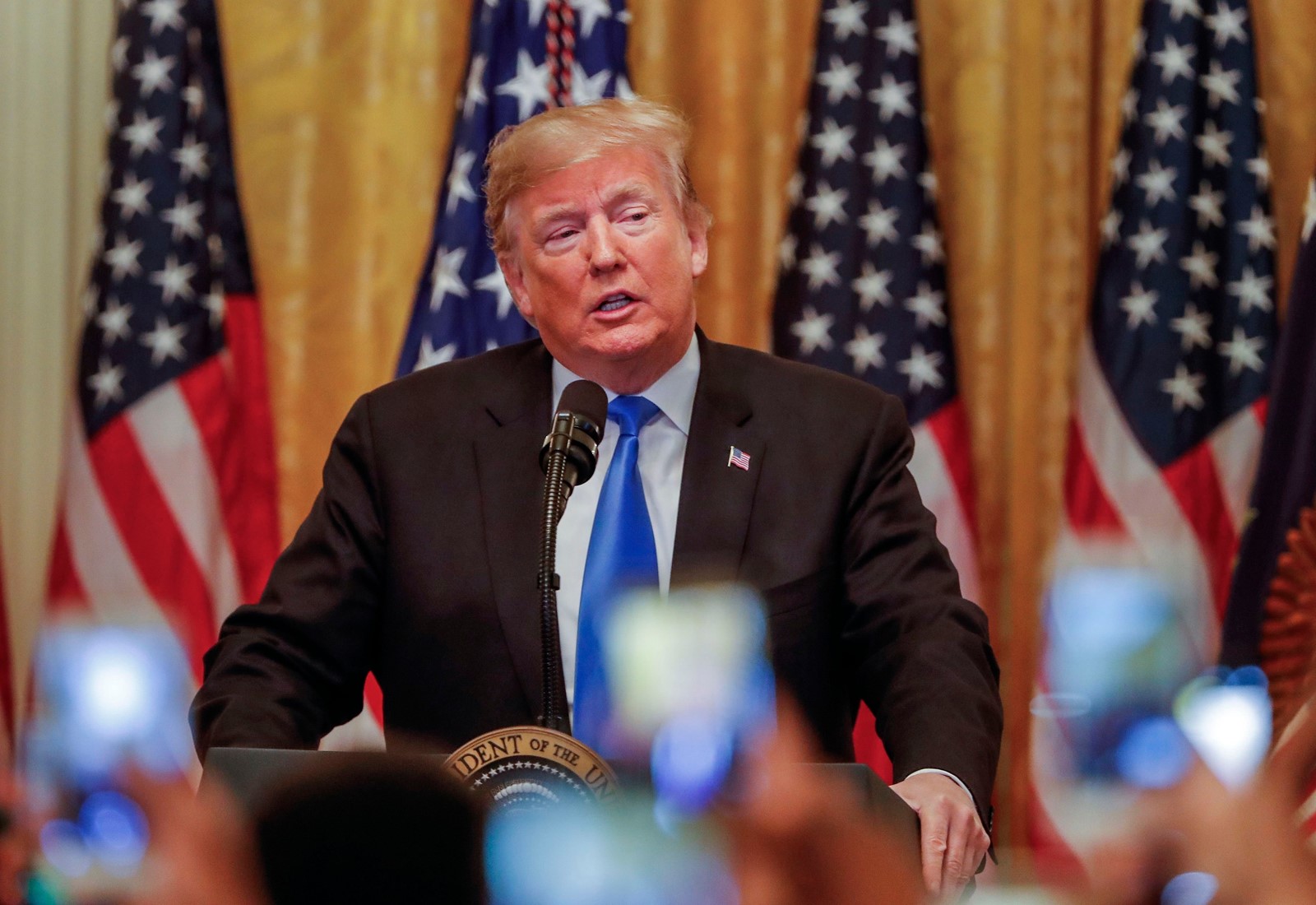 As President Trump on Friday celebrated the FBI’s arrest of a suspect in a spate of attempted mail bombings, he read from a teleprompter to promise “swift justice,” denounce “despicable” political violence and call for national unity.

Yet just two hours earlier — and less than an hour before the arrest — the president had tweeted his frustration that the media’s coverage of “this ‘Bomb’ stuff,” instead of politics, was hurting Republicans’ momentum headed into the Nov. 6 midterm election. By his quotation marks, he seemed to subscribe to some conservatives’ “false flag” conspiracy theories that the threats were a liberal hoax.

Even after the arrest, Trump turned from his scripted statement at the White House to address supporters there, reverting to his usual attacks on “fake polls,” the media and “globalists.” That last mention prompted chants against George Soros, the billionaire philanthropist who was a target of a pipe bomb, and “Lock him up!,” which a smiling Trump indulged.

It was yet another moment of mixed messages and missed opportunities for leadership from a president who, in times of national crisis, has repeatedly delivered the expected “presidential” performance only briefly and from a script, before returning to his familiar political attacks. In this case, moreover, the attacks were the very sort that had critics charging that his provocative rhetoric — including the harsh jibes at Soros, Hillary Clinton, Barack Obama and others — were what goaded the would-be bomber to target them.

“You want and expect presidential leadership in times like these to be strong, empathetic and consistent. And it’s really the consistency bit where President Trump falls short,” said Michael Steel, a Republican strategist who was a spokesman for former House Speaker John A. Boehner.

“He’ll make the teleprompter speech, say the right thing, and then there’s a 3 a.m. tweet or an aside that goes right back to viewing these events through a partisan or self-centered lens,” Steel added. “It undercuts his sincerity.”

The White House declined to comment on this line of criticism. Aides also refused to say whether Trump had been briefed on the arrest before or after his 10:19 a.m. tweet in which he suggested doubts about the attempted bombs. The suspect, 56-year-old Cesar Sayoc Jr., was arrested at his white van, which was plastered with tributes to Trump and messages against Democrats and CNN, which was the intended recipient of at least two pipe-bomb devices.

“Whatever he does, there are followers who model their behavior on his,” said Charlie Sykes, a conservative author who has broken with his party over Trump. “In a country of 350 million people, there are going to be more than a few unbalanced individuals who will take him both literally and seriously.”

Yet, Sykes said, “The president will read the right statement and then he immediately reverts to form.”

Trump’s inability to sustain a unifying message in the midst of national trauma — in this case potential assassinations of two former presidents, former Cabinet officials and several members of Congress — sets him apart from all predecessors, according to Julian Zelizer, a presidential historian at Princeton University.

“All our presidents are very political and partisan, but there is this check where in these moments, they have to be unifying,” he said. “It’s low-hanging fruit for a president to respond in a consistent, somber way to something like this. Trump can do it a little bit but it’s almost as if the temptation is too strong to go back to his campaign rhetoric.”

An early, memorable example of what’s become Trump’s familiar behavior pattern was his response to the violence incited in August 2017 by white supremacists and neo-Nazis marching in Charlottesville, Va. He vacillated between words of unity and then statements condemning both the racists and the mostly peaceful counter-protesters equally.

But he stepped on that message almost as soon as he stepped off Air Force One that evening in Wisconsin for a political rally. There, he joked repeatedly that he was behaving and “being nice” by eschewing some of his usual attack lines.

It was the closest thing to an acknowledgment that his incendiary rhetoric might contribute to the charged political climate. Yet he attacked the media, as usual, for “fake news” that caused the anger.

The next morning, Trump made that point with a tweet:

“A very big part of the Anger we see today in our society is caused by the purposely false and inaccurate reporting of the Mainstream Media that I refer to as Fake News. It has gotten so bad and hateful that it is beyond description. Mainstream Media must clean up its act, FAST!”

Trump did not call any of the Democrats who were the intended targets, as past presidents likely would have.

Leon E. Panetta, a former White House chief of staff and Cabinet official in Democratic administrations, said presidents typically have had a “sense of their obligation as president to try to comfort people that are being threatened,” regardless of party.

“Everything for him is placed in a political context that he interprets as not requiring the president to kind of play the role of leader of the country,” Panetta said. “He’s in the middle of an election campaign. He’s been doing all of these rallies. I think in many ways there was a sense that whether or not this threat was real or not, that this was just kind of the political volatility that we’re all a part of.”

Trump tweeted about 50 times since the news broke on Monday afternoon of the first suspected bomb at Soros’ New York estate. Six were against the caravan of refugees from Central America walking toward the U.S. border. Four related to the bomb scare, though just one — a retweet of a post by Vice President Mike Pence — expressed concern for the intended targets while the others criticized the media.

Most memorably, on Friday morning as the FBI closed in on Sayoc, Trump tweeted his complaint against the media for reporting on “this ‘Bomb’ stuff” to the detriment of Republicans. He also tweeted his complaints that Twitter had removed followers from his account, about the cost of illegal immigration and, pre-dawn, against CNN.

Fleischer said he would have preferred that Trump display a more traditional style but believes “a sufficient number of Americans shrug their shoulders and say, ‘That’s Trump.’”