Officers left a slew of injuries as they used batons and projectiles in ways that likely broke their own rules. 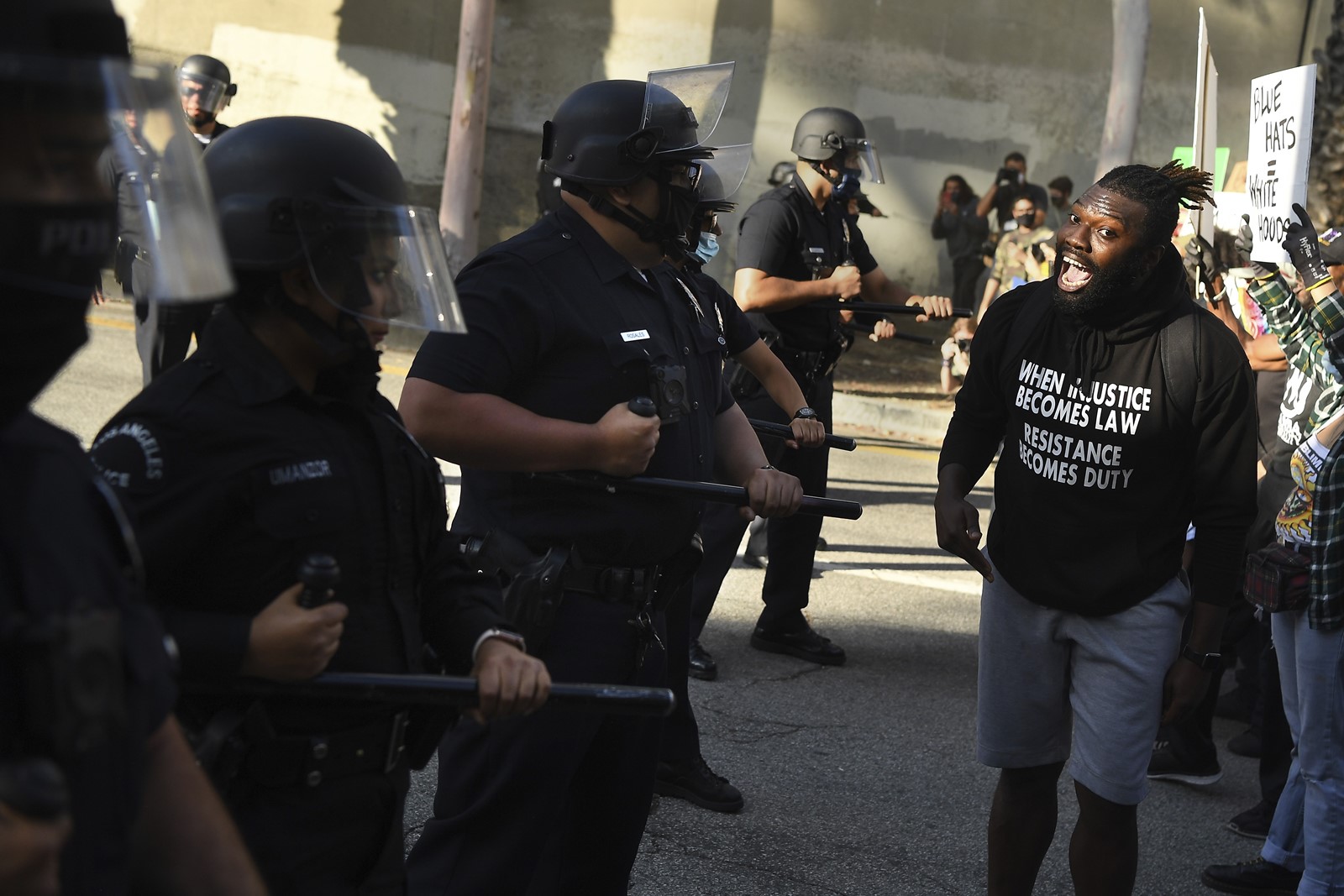 A PROTESTER confronts LAPD officers downtown. Weapons such as beanbags and foam projectiles are meant to reduce shootings, but there are now calls from Black Lives Matter and others to restrict their use. (Wally Skalij Los Angeles Times)
PREVIOUS IMAGE

As smoke from a nearby car fire billowed up, the police batons came raining down. Deon Jones felt one lash across his back and shoulder as he ran. Glancing back, he saw a Los Angeles police officer aim a tactical gun right at his face.

The pain was sudden and searing. Ringing filled his ears. At the hospital, a doctor told the 28-year-old protester that he would have been blinded had the police projectile struck an inch to the right — and dead had it hit an inch higher, at his temple. Instead, he had two cracked bones in his face, a head injury and stitches across his cheek.

“We are protesting police brutality,” Jones said, “and then being brutalized by police while we’re protesting.”

A Times review of dozens of instances of police force during protests over the killing in police custody of George Floyd found that demonstrators suffered a range of injuries at the hands of the LAPD, from minor bruising from baton strikes and falls as police skirmish lines advanced, to serious injuries to their genitals and heads from foam and sponge bullets and beanbags being launched into crowds, sometimes from close range. To date, there has been no formal assessment of how many protesters were hurt.

Many of the protesters’ wounds are from incidents in which police appeared to have violated their own policies for how weapons such as batons and “less lethal” munitions may be used, after they had declared large gatherings unlawful and subject to dispersal, the review found. Others, including some of the most serious injuries to men’s genitals, appeared to be the result of sanctioned uses — such as officers aiming projectiles directly at a man’s belt line.

Since the Rodney King beating nearly three decades ago, the LAPD has increasingly placed limits on how police use force, from wielding batons and flashlights to firing weapons and using certain choke holds. Weapons such as beanbags and foam projectiles were ushered in to reduce police shootings. But there are now calls from Black Lives Matter activists and others to restrict their use after the police response to protests, and additional questions about the use of batons.

Ed Obayashi, a police force expert, said the protest videos underscored how the use of batons can quickly spin out of control and result in serious injury.

“After one blow strikes, it is a self-fulfilling prophecy and you get casualties,” he said.

Witnesses to the events say police were at times responding to water bottles and other debris being thrown at them and fires and other vandalism occurring around them. But other times, officers appeared to be lashing out at peaceful protesters simply for being on the street.

“We were standing there, and they were really not wanting us there anymore,” said Matt McGorry, an actor who was hit with batons and shot in the stomach with a projectile, and whose videos from the front lines are among the most viewed online. “They just came after people, even when people had their hands raised. They were swinging at people’s knees like they were trying to hit a home run.”

Police and city leaders, including Mayor Eric Garcetti and LAPD Chief Michel Moore, said the actions of police officers who clashed with protesters in recent weeks are under review. Josh Rubenstein, an LAPD spokesman, said the department has committed 40 internal affairs investigators to the task of reviewing such interactions and assessing whether policy violations or more serious misconduct occurred.

More than 50 investigations have been launched into complaints about police behavior during the protests, including 28 alleging excessive force.

Seven Police Department employees have been taken out of the field pending the results, the department said Wednesday. Moore has said he witnessed officers using batons in ways he did not approve, though it’s not clear whether those officers are among those assigned to desk duties.

The recognition of failures is an evolution in tone from the early days of protest, when Garcetti and Moore repeatedly praised the department’s officers for their “restraint.” Both still maintain the police force performed admirably overall.

Garcetti and Moore have repeatedly lamented the fact that more than two dozen police officers were injured, including one with a skull fracture, but have attempted no public accounting of protester injuries at the hands of police.

According to The Times’ reporting, there were a significant number, including many from a violent police confrontation with a large gathering of protesters near the Grove in the city’s Fairfax district on May 30.

Police say a peaceful protest at Pan Pacific Park spiraled out of control as people in the crowd, whether protesters or infiltrators keen on inciting chaos, started to damage stores, light cars on fire and endanger other citizens and officers. Protesters say police stirred up trouble by massing in riot gear and then hemming people into confined areas with no escape.

Cedars-Sinai Medical Center, about two miles away, treated several patients with injuries from tactical bullets, said Dr. Sam Torbati, medical director of the hospital’s emergency room. Most patients had injuries such as bruising and lacerations and were discharged after receiving treatment, he said.

Hospital officials would not provide total figures for such injuries.

Asst. Chief Robert Arcos, who oversees LAPD operations, said officers were deploying sponge and foam bullets at specific targets, including those throwing projectiles at police, and not simply to disperse or push back crowds. But he acknowledged many complaints of excessive force are being looked into.

Department policy for such weapons requires they be used only on individuals who present a clear and immediate threat and are specifically targeted, and from at least five feet away. It mandates officers aim at individuals’ navel or belt line first, and then their arms and legs if initial shots are ineffective. Officers are not supposed to aim at people’s heads or necks. They are not to use the weapons in response to verbal threats or “mere noncompliance.” They are not to fire the weapons at people running away.

Arcos said batons were generally used to push people out of the area after dispersal orders, or to strike people in instances where officers were confronted with “aggressive or violent behavior.”

“I know that there are video images that do not seem to support that, but there is more context that we have to look at — for example, the body-worn video from those officers, which we are doing,” he said.

Protesters said the batons were used to beat protesters who were passively resisting dispersal orders, and at times when people were trying to disperse but weren’t doing so as quickly as officers wanted them to.

During the same protest in Fairfax where Jones was shot in the face, Eric Schuh was injured too. The projectile that hit him snapped off one of his teeth, cracked several more and busted his lip open.

Schuh, 28, said he was trying to help someone who had fallen in the crowd when he heard a bullet whiz by his ear. He said he threw his hands up and tried to duck behind a car, but it was too late. He saw the police officer aim his gun directly at him, he said.

“The next second I was looking down and blood was just coming out of my mouth like a faucet, and I remember being in intense, intense pain,” said Schuh, who lives in Long Beach.

Schuh’s friend, Danyel Norman, 32, said she was hit in the throat seconds before Schuh. Terrified, they rushed away and into an alley that resembled a triage ward, full of others with similar injuries, Norman said.

They were “all on the ground treating each other,” she said, when police began firing into the alley.

Suzee Dunn, 30, a writer and producer, said she saw police corral crowds into tight spaces only to start shooting projectiles wildly while jabbing people in the gut and striking them in the legs with batons. She was shot in the leg.

“It was just mass chaos and insanity and people hurt everywhere,” she said.

Peter Murphy, 32, a manager at a local deli, said police showed zero restraint with their batons.

He said he witnessed police firing projectiles at random into large crowds of fleeing protesters.

“The crowd started to scatter, people started to move and get out of the way, and rubber bullets kept being shot. Even as people were retreating they kept getting hit,” he said. “It seemed like the intention was to hurt people rather than just disperse them.”

Days later, Ben Montemayor, a 28-year-old filmmaker, was hit by a police projectile in Hollywood.

An LAPD officer had grabbed a sign reading “Defund the Police” away from Montemayor and a friend, then shoved the friend to the ground, Montemayor said. When he went to help his friend up, he felt intense pain, he said, and realized he’d been shot in the groin.

One of his testicles swelled to twice its usual size, and the other was also injured. At a nearby hospital, he was rushed into emergency surgery to save his testicles, he said.

Some medical experts have for years argued police give the wrong impression of such weapons when they refer to them as “less than lethal” or suggest they are a soft approach to enforcement. Baton strikes can cause lasting injuries, and projectiles can be deadly.

A 2017 analysis of 1,984 people injured by rubber or plastic bullets found that 3% were killed and 15% permanently injured by the impact, left with vision loss, head injuries or limb amputations.

“If you fired at a ton of people in the crowd, someone is going to get hit in the eye or in the face or in the scrotum or something like that and have permanent disabilities,” said Dr. Rohini Haar, the study’s lead author and an emergency room physician.