Can high-density and historic homes live in same ’hood? 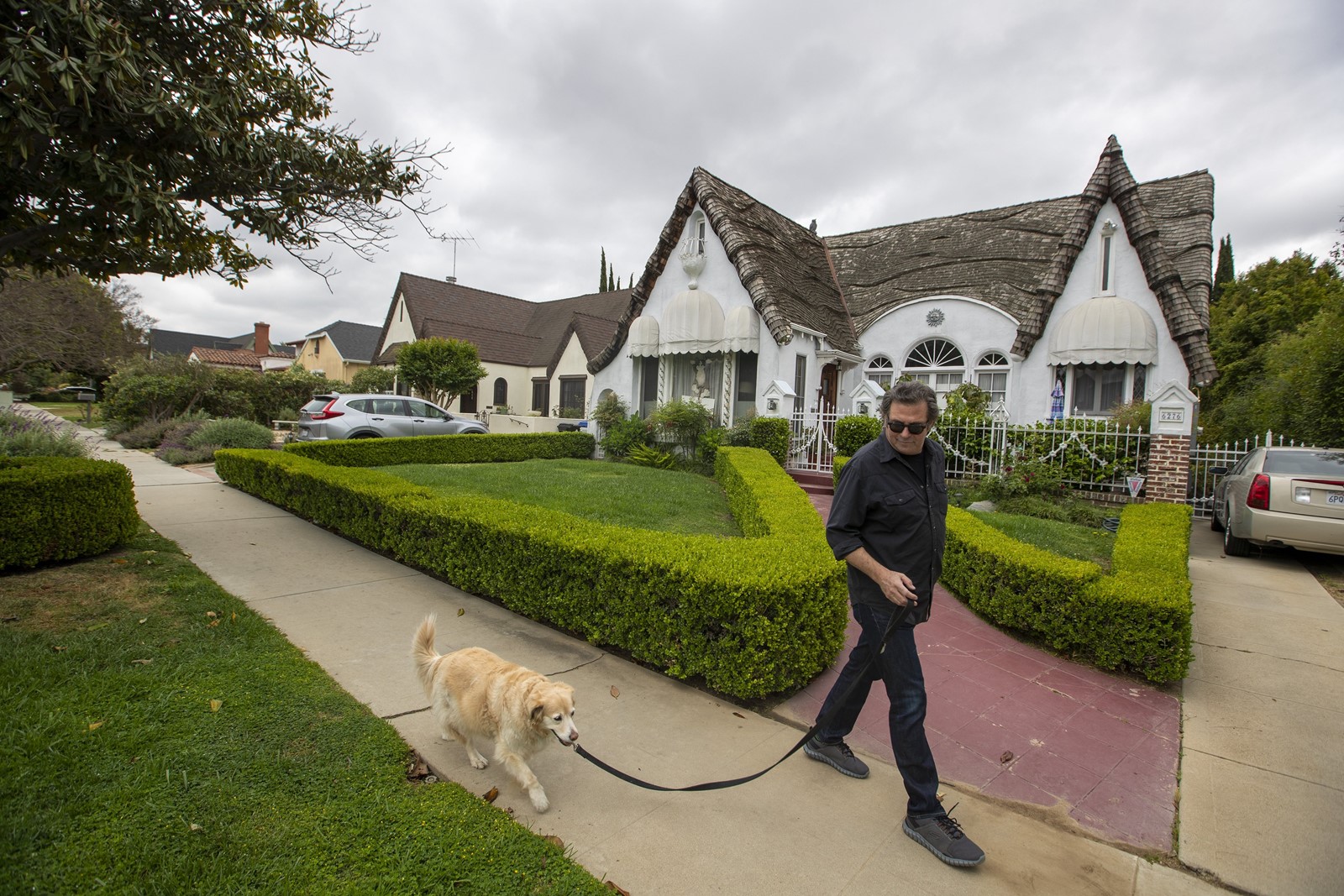 Dorothy Clark grew up a short stroll from where she now lives, and she looks back fondly on the simple joys of a carefree childhood in Mid-City Los Angeles.

“We used to ride bikes, roller skate and put on plays in the street,” said Clark, who also recalls pedaling over to the landmark Carthay Circle Theatre, a neighborhood movie palace that hosted big Hollywood premieres.

Clark and I hooked up with her neighbor, Erich Anderson, and ambled over to a small circular park with a fountain. Anderson served as our tour guide. He identified the architects who designed the Spanish Revival, Tudor and storybook homes built almost a century ago, when developer J. Harvey McCarthy buried utility lines underground to create a peaceful, unobstructed aesthetic.

In the park, we met with several more residents of the area, all of whom stand firmly opposed to Senate Bill 50. Among other provisions, the bill would require cities to allow multistory apartment buildings to be built in areas like Carthay Circle near mass transit. The aim is to relieve the state’s housing shortage and get more people out of their cars as the effects of climate change intensify.

“We’ve got Wilshire right there, and they can go as high as they want,” said Ann Rubin, pointing in the direction where she thinks new housing should go — along commercial corridors, rather than in places where multistory buildings would alter the look and feel of residential areas.

Walter Dominguez, another resident, remembers when the neighborhood was in decline in the 1980s, and residents feared developers would chart a course away from the past. He and others began a three-year process that finally earned the area a City Hall designation as a historical preservation overlay zone. They thought that would ensure the neighborhood’s character would survive for future generations.

If SB 50 passes, said Dominguez’s neighbor Brad Kane, some of the protections from that designation could be lost. Even with preservation status, structures that don’t contribute to the historic integrity of the neighborhood could meet a wrecking ball.

“To put up an eight-story building in the middle of this district virtually nullifies the integrity” of the neighborhood, said Kane. “And there’s nothing the city can do to protect us because state law trumps municipal law.”

Up and down the state, residents and local officials have been taking sides and lobbing barbs as SB 50, introduced by Sen. Scott Wiener (D-San Francisco), slips and slides through the legislative process, neither a sure bet nor a certain failure.

It’s hard not to see the Carthay Circle residents’ point that their peaceful neighborhood stands to lose a lot if the bill passes. But there is another side to the issue.

The man has a point, and it really doesn’t make sense to build that housing where people would just have longer commutes.

But what Wiener sees as bold, L.A. City Councilman Paul Koretz sees as a misguided overstep. He told me the purpose of SB 50, as he sees it, is to “destroy single-family-home neighborhoods in Southern California.” He was referring in part to recent amendments that would weaken the bill’s impact in some smaller communities, among them affluent Marin County in the Bay Area.

Koretz, who spoke last week at a Carthay Circle meeting attended by hundreds of SB 50 foes, makes some reasonable arguments. He thinks putting multistory apartment buildings on lots where single-family homes now stand would be out of scale and do little or nothing to address the state’s greatest need — more affordable housing. He called Wiener’s bill “a handout for developers,” some of whom happen to be big supporters of SB 50.

Koretz also questions whether the bill would actually ease either traffic or the housing crunch, noting that developers would be inclined to build luxury housing. That would mean little relief for those most in need — and it would also undermine the state’s goal of reducing carbon emissions, because those who can afford the rent might be more likely to drive than ride a bus or train.

UCLA professor Mike Manville sees this a little differently. Wiener’s bill has already been softened in answer to critics, he said, and there’s no telling how or whether it might emerge when the all the futzing is done. But he likes the intent behind it. He says he understands the concerns of Carthay Circle residents but thinks everyone has to contribute to solving the housing crisis, including those living “smack dab in the middle” of the nation’s second-largest city.

“We have people in our city living in tents. They live in their cars. They live under our highway overpasses and they die on our sidewalks,” Manville said. “At a certain point, the pedigree of your house has to matter a little bit less” if you live within walking distance of major transit stops and jobs. “You ought to have to share some of these opportunities your location offers.”

In my past conversations with Manville, he’s argued that homeowners have benefited for decades from mortgage deductions, Proposition 13 tax relief and zoning restrictions that have limited new construction and driven up the value of their homes, turning thousands of Californians into paper millionaires. If we want more affordable housing, he said, maybe those homeowners can contribute a small fraction of their wealth to a construction fund when they sell their homes.

Koretz said Los Angeles voters have already taxed themselves to build more affordable housing, and thousands of units are in the construction pipeline. He said L.A. should build more density along commercial rather than residential corridors, offer more assistance to those in danger of becoming homeless and require developers to include more affordable housing in their developments.

In Carthay Circle, Kane said he’d much rather see greater use of backyard granny flats to create affordable housing.

Anderson said he often commutes by mass transit, and he thinks a denser, more vertical city is in our future. But he said other cities in the U.S., and all over Europe, have done that without destroying links to their own history. He thinks Los Angeles can too, but we need local control rather than having Sacramento tell us how to run our own affairs, as SB 50 would allow the state to do.