GOP’s war on jobless aid is bad for workers 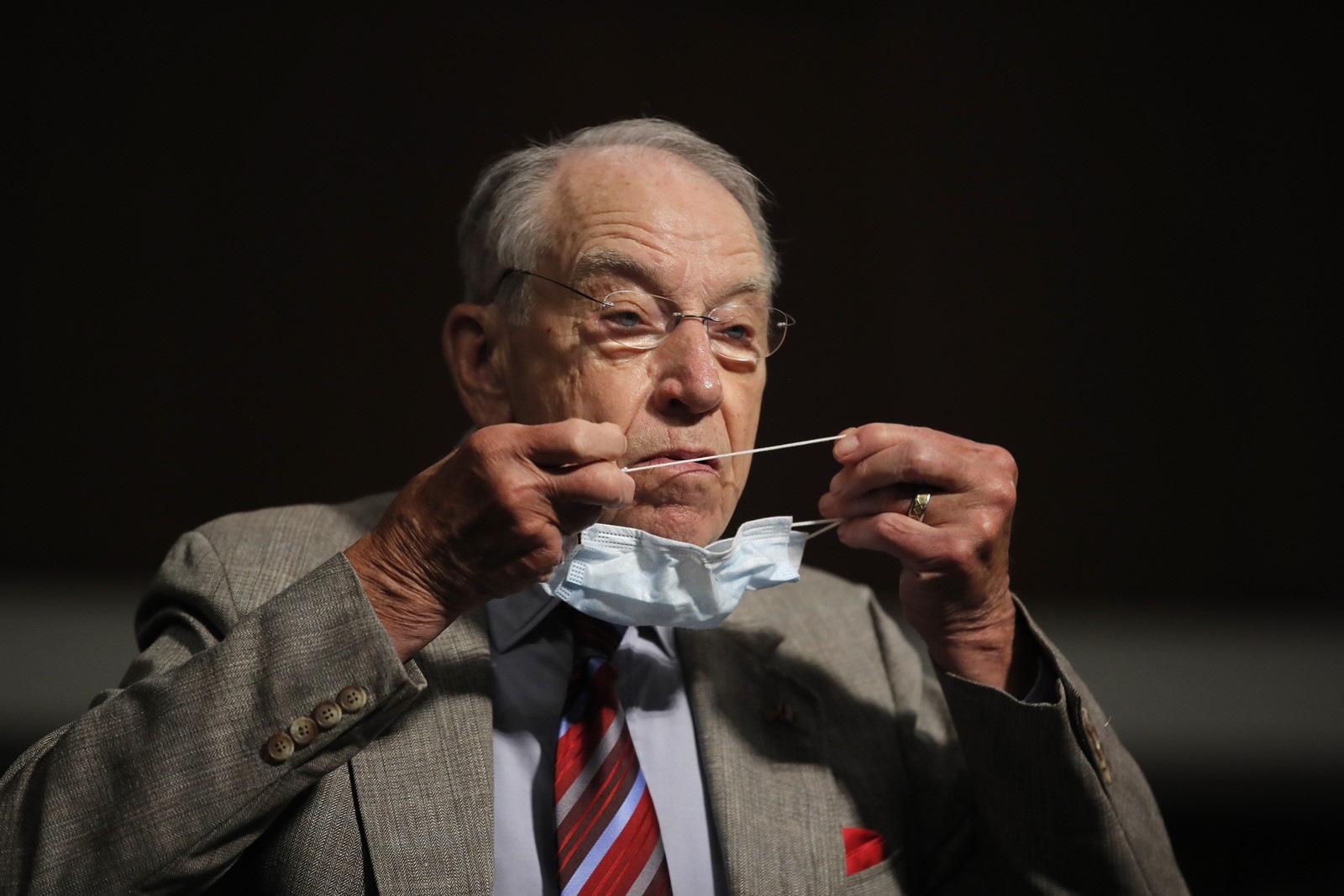 Republicans on Capitol Hill never tire of portraying themselves as family-friendly populists determined to help American households get a leg up in this rough-and-tumble world.

The pandemic crisis is where the rubber meets the road on this claim. As the coronavirus has made a mockery of half-measures to stem its spread, so too has it exposed the party’s true character.

As we write, Senate Republicans have been unable to reach an internal accord — let alone an agreement with Democrats controlling the House — on extending and expanding coronavirus relief programs last enacted as the CARES Act at the end of March.

Plans to introduce a sample bill as an initial negotiating strategy Thursday fell apart. The current goal is Monday.

Of course, there’s no urgency.

Oh, wait — by Monday, emergency unemployment benefits will have expired for millions of American households. The nascent economic recovery seen in April and May appears to be evaporating.

What’s known about the GOP outline includes a cut in the CARES Act’s emergency unemployment benefit from $600 a week to as little as $100.

It’s proper, even imperative, to ask what Republicans are thinking when they advocate slashing unemployment benefits in the teeth of a pandemic and amid a persistent, even intensifying, unemployment crisis.

To be fair, congressional Republicans haven’t been shy about revealing their thoughts. They maintain that the benefits are discouraging American workers from going back to their jobs.

With some during this period collecting more from unemployment than they did on the job, there’s a subtext that unemployed workers are layabouts nestled on their couches in front of the TV, scarfing down bonbons purchased with their $600 weekly handouts.

“We can’t continue to have $600 [a week] for a few more months because it is just making it practically impossible for businesses to get people back to work.... Common sense tells you that if you want people to go back to work then government can’t be an unfair competitor by paying people not to work.”

In this case, to paraphrase Dickens’ Mr. Bumble, common sense is an ass. There is no evidence that the emergency unemployment benefit has constrained hiring across the economy. Indeed, even the sources commonly quoted by adherents to this view don’t say what they claim.

Before we get into what the evidence actually does show, let’s examine the economic effect of the $600 weekly emergency unemployment stipend, which started March 29 and was scheduled to continue through this month.

The stipend was the most significant element of the CARES Act, the pandemic relief measure passed by Congress and signed by President Trump at the end of March. By most reckonings, the emergency aid materially bolstered the economy in the face of a devastating collapse in employment.

The Bureau of Economic Analysis reported that disposable personal income rose in April by a record 13%. That produced a rebound in retail sales of 18% from the previous month.

Although retail sales were down in May by 6% from a year earlier, this was “a surprisingly small reduction given how many stores were still closed,” former Obama administration economic advisor Jason Furman told a House committee June 18.

Republicans like Grassley talk as if the emergency unemployment aid is a pure cost to the American economy. It’s unclear what they think happens to this money once it reaches households. Perhaps they think it’s used as padding for mattresses.

The truth is that it’s spent — on rent, food, gas and other household necessities. As my colleague Don Lee observes, the emergency unemployment benefits “help millions of workers keep paying their rent, writing mortgage checks, making car payments and caring for families.”

The money supports landlords, grocery stores, gas stations, anyone else providing purchased goods and their employees. Eliminating the emergency benefit entirely would take as much as $18 billion a week out of the consumer economy, or more than $930 billion on an annualized basis, at a moment when the U.S. economy has been rocked back on its heels.

The consequences would be dire. Economist Ernie Tedeschi, the macro research director at Evercore ISI, estimates that full expiration would trim 2% from gross domestic product by the end of this year. That’s almost as much as the average annual GDP growth since 2016.

The U.S. would have 1.7 million fewer jobs by the end of the year than if it kept the stipend in place, he calculates. Smaller reductions would have commensurately smaller effects, but in no event would they be positive.

That brings us to the received GOP trope that unemployment benefits discourage work. This notion in general has a long history, but has never had much in the way of a factual foundation.

A study published this month by the Federal Reserve Bank of Chicago found, to the contrary, that unemployed workers receiving benefits searched for work more intensely than those whose benefits had expired or who had not received them at all.

The authors also found that “once individuals exhaust their benefits, their search effort drops precipitously.” That suggests that unemployment benefits enhance the desire to return to work, rather than the other way around.

The idea that unemployment benefits discourage work has a sort of brute logic — more so given that the emergency pandemic assistance is generous enough to pay some recipients more than they were earning in their pre-pandemic jobs.

That’s certainly true — the average replacement rate of traditional unemployment benefits has been 30% to 50% of a worker’s wages. Because the $600 weekly federal boost on top of traditional benefits set by individual states is a lump sum not tied to workers’ pre-pandemic wages, some workers receive more than 100% of what they were paid in the past. But does that make a difference?

“The objection to emergency unemployment insurance is based on a very simple story,” Tedeschi told me. “It’s that unemployment benefits pay more than work now, so why would you go back to work?”

That notion, however, “assumes that workers are extremely shortsighted,” Tedeschi says. Almost everyone understands that the $600 bump-up is temporary, even if it were to be extended into 2021, as Democrats advocate.

“Why would you, as a worker, pass over a job that is likely to be a more stable arrangement in favor of what could just be another couple of weeks of emergency benefits?” Tedeschi asks. “That’s a really big risk for workers to take.”

It’s not as if America is anywhere near full employment today. Even after improvements in job creation in May and June, the unemployment rate is still higher than it was at the peak of the Great Recession, Tedeschi observes.

Yet the halls of Congress — and not a few news columns — reverberate with anecdotes about businesses struggling to coax back to work employees who are coasting along on $600 weekly checks. These yarns, and the spin they’re given, warrant close examination.

To begin with, there are the problems of confirmation bias: Reporters and politicians are inclined to seek out testimony that supports their own expectations. An employer who can’t fill job slots because workers refuse to give up their unemployment: That’s a story. An employer who has no trouble bringing workers back: Not so much.

Some sources cited for proof of the downside of emergency unemployment have been distorted unrecognizably. In May, the financial publication Barron’s declared, “$600 Unemployment Benefits Are Keeping People From Returning to Work, Fed Says.” Its source was the Federal Reserve’s May 27 Beige Book, a compendium of subjective yarns about the economy published eight times a year.

As it happens, the Beige Book said nothing like that. Its contributors generally cited three concerns raised by reluctant workers — not only generous unemployment benefits, but “workers’ health concerns [and] limited access to child care.”

The Federal Reserve Bank of Philadelphia reported that among its contacts, “when asked about impediments to recalling workers, 33% of the firms noted fear of infection and 25% noted lack of child care; overcoming the lure of expanded unemployment benefits was noted by 29% t of the firms.”

The bank didn’t say how the firms ranked these obstacles, but plainly unemployment benefits were not the only thing “keeping people from returning to work.”

Republicans showed no shame in delivering a massive handout to the rich in 2017 via a huge and unnecessary tax cut. Now that the imperative is upon them to bail out American families at a time when it is necessary to preserve the entire economy, they’re falling all over themselves to avoid it.

In the past we’ve found reason to ask, “Who are these people working for?” The current spectacle prompts us to ask: “Are they working for anybody?”