No easy choices amid border unrest 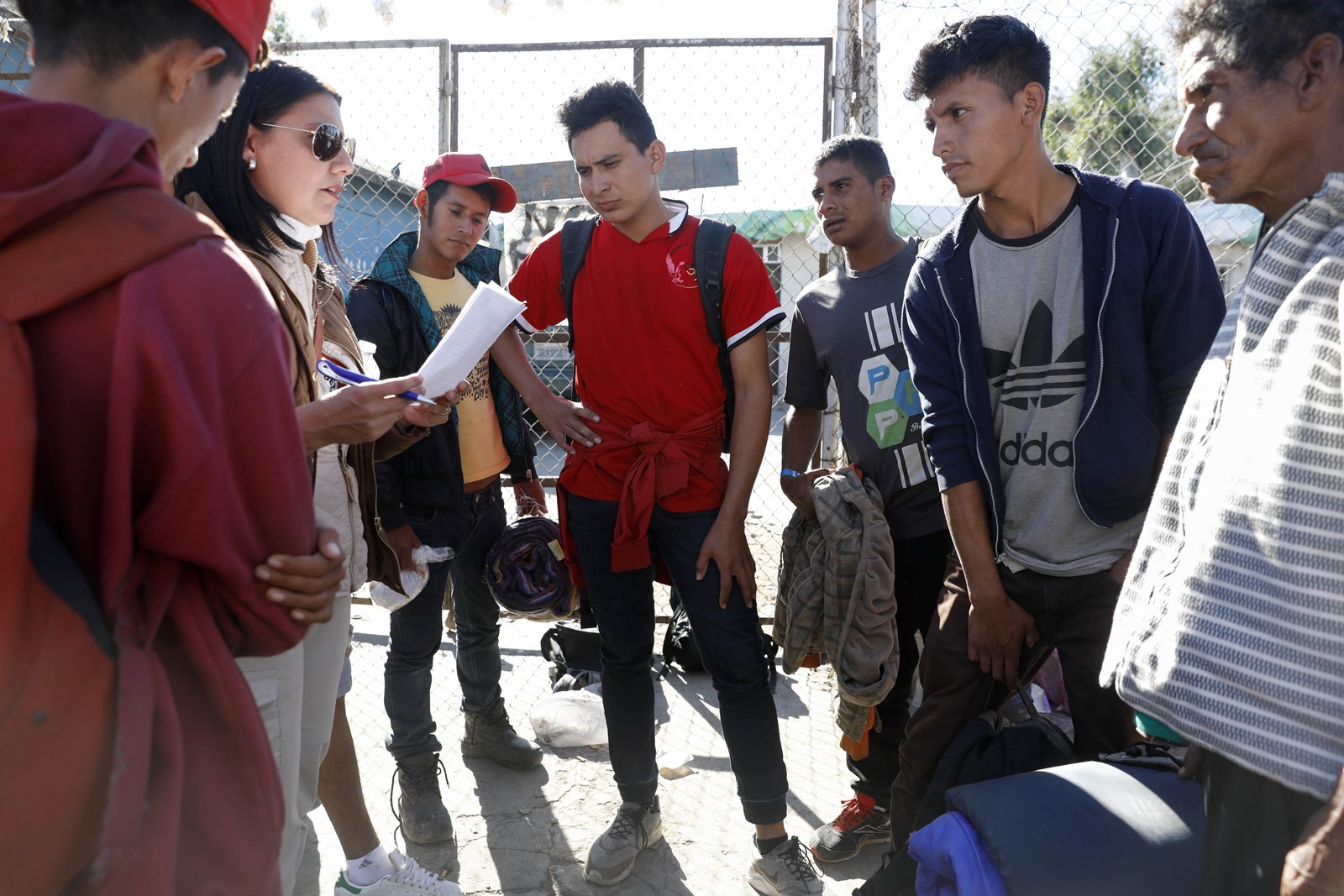 MEMBERS of the caravan hand themselves over to Grupos Beta, which was assisting with the deportation process on Monday in Tijuana. (Photographs by Gary Coronado Los Angeles Times) 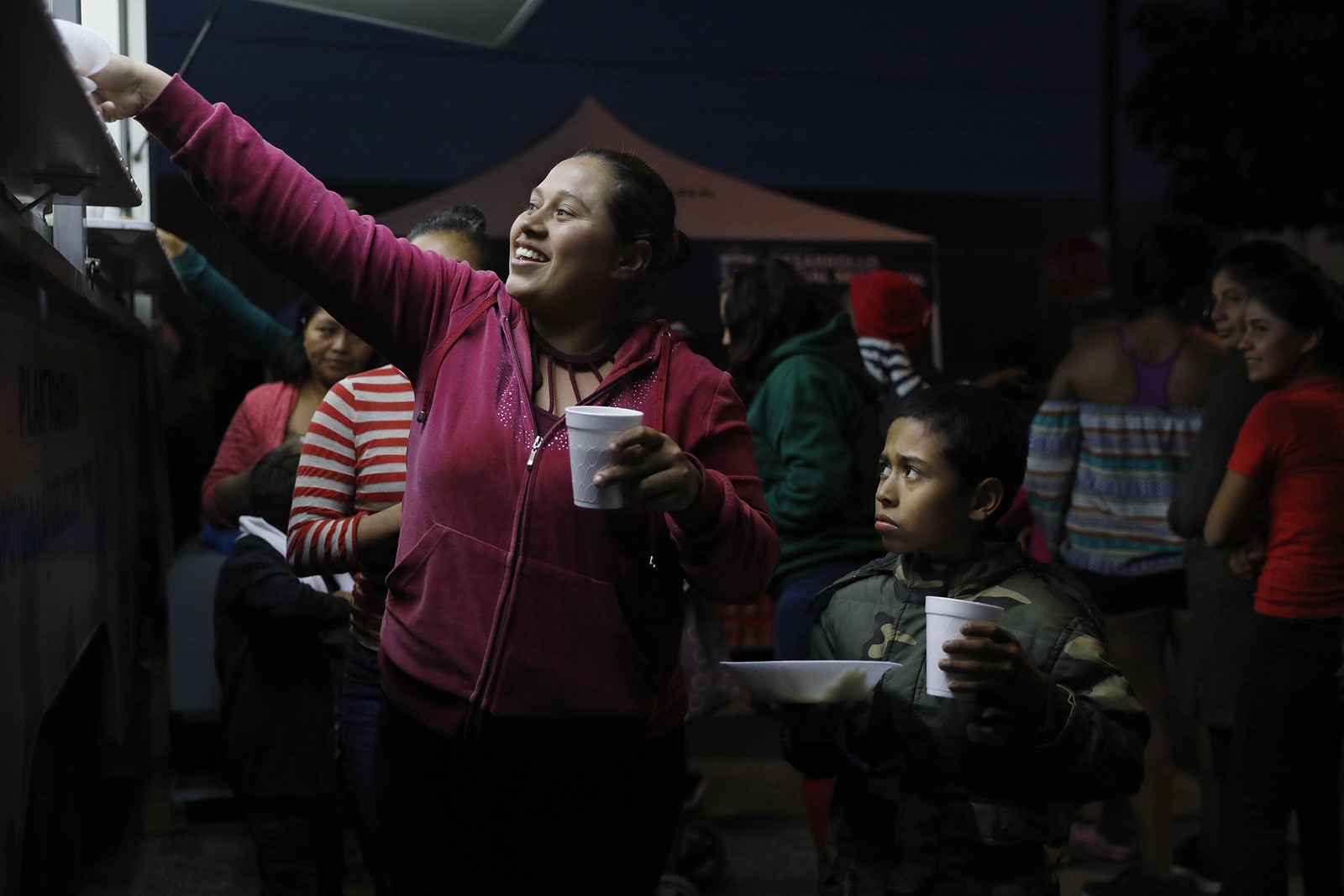 A WOMAN accepts food served by the Mexican Marines outside Benito Juarez Sports Center, which is functioning as a migrant shelter, on Monday in Tijuana. ()
PREVIOUS IMAGE

For thousands of Central Americans packed into a sports complex in Tijuana that’s crowded with tents and smells strongly of sewage, the journey has only gotten harder.

After a clash at the border Sunday, United States authorities closed the San Ysidro Port of Entry for more than four hours and said 69 migrants who had managed to cross could face criminal charges. The U.S. Northern Command in recent days has redirected 300 troops to California to help with border security. On the Mexican side, authorities said they arrested 39 migrants and are deporting 98 others linked to the fracas.

President Trump on Monday called on Mexico to send “flag waving Migrants, many of whom are stone cold criminals, back to their countries.”

“Do it by plane, do it by bus, do it anyway you want, but they are NOT coming into the U.S.A. We will close the Border permanently if need be. Congress, fund the WALL!” he tweeted.

Speaking with reporters in Gulfport, Miss., on Monday, Trump falsely claimed that three Border Patrol agents were “very badly hurt” by rocks and stones in Sunday’s skirmish. He said he would consider closing the border if there’s violence and suggested some of the people photographed with children were “grabbers,” not their parents, because it’s “safer” to be with a child.

Homeland Security Secretary Kirstjen Nielsen said no one was injured in Sunday’s clash. She added that the caravan includes more than 600 convicted criminals, though it’s unclear how they were identified, and that an “overwhelming majority” of the caravan migrants are not eligible for asylum.

For many who have made the 2,700-mile trek to Tijuana from Central America, the unrest at the border and the political backlash that followed has added another layer of fear and anxiety to an already agonizing situation.

“I’m not trying to jump the wall,” said Dennis Martinez, a 34-year-old Honduran seeking asylum in the United States. “Many of us aren’t. Why should we be punished for what a few have done?”

The dusty complex where more than 5,700 migrants are staying was crowded Monday with tents and makeshift homes made of cardboard boxes, towels and plastic trash bags. Hundreds lined up for food, while others hung their wet clothing to dry on trees. Some bathed in outdoor showers, armed Mexican federal police circling the camp in armored trucks.

A Honduran man asked a couple where he could sign up for asylum. The woman shook her head and got back to hanging her clothes on a line extending from one tree to another.

Children ran around a playground, gliding down red and yellow iron slides. A boy approached a passerby, begging for a peso.

As the sun fell, hundreds of migrants lined up for dinner distributed by Mexico’s Marines. On a spot of grass, a group of men played cards. Others sought to make a few pesos by selling cigarettes, slices of pizza or fresh-cut fruit. Others dozed.

And in some areas, families quietly debated next steps.

None of their choices are easy: Wait months for the opportunity to file an asylum claim in the U.S. — officials at the San Ysidro crossing generally accept no more than 100 asylum applications a day — stay and work in Tijuana, or go home. Mexican immigration authorities have been stationed at the shelter since migrants began arriving, offering free rides back to Central America.

Returning would be admitting defeat — and going back to the same impoverished and often violent conditions that caused many to leave in the first place.

But staying in Tijuana may not be much better.

Though the economy is booming in this sprawling border city of 1.8 million — low-slung factories cover the desert hills on the eastern outskirts of town — Tijuana is also facing a crisis of violence. More people were killed here last year that any year before, and the city has already surpassed that record this year. The violence has mostly been focused in the city’s slums, where Central American migrants would most probably end up living.

Staying also means waiting in a city that has become increasingly hostile to immigrants, even though the majority of its residents migrated here themselves from other parts of Mexico, and the city has successfully integrated other large waves of migrants — from China, Iraq and, most recently, Haiti.

“The Mexican people here are bothered by our presence,” Martinez said. “They look us up and down. There were protests. Some don’t want us here.”

The Honduran man said he initially thought about staying in Tijuana to find work but now realizes the border city is not safe for foreigners such as himself.

“I’m escaping a dangerous situation,” he said. “Why would I then put myself in danger again?”

Henry Jose Juarez, 16, was hit in the head by a tear-gas canister during Sunday’s border clash and suffered several second-degree burns when the canister exploded. On Monday, he limped around the sports complex on a single crutch, bandages wrapped around his head, left foot and right shoulder.

Despite his wounds, Henry, a migrant from El Salvador who has been in Tijuana for a week, said he didn’t plan to go back.

“There’s not a lot of work in my country, and it pays very badly,” he said. “We came just to work.”

Others felt disillusioned by the journey north. After nearly two weeks of living in the packed tent city, Ulices Diaz did something he never imagined when he set out from Honduras last month with a small backpack and big dreams: He signed a voluntary deportation order to go home.

Diaz, 29, missed his 10th wedding anniversary and yearns for his family. He felt betrayed by both the caravan leaders, who organized the migrants to march to the border Sunday, and the U.S. agents who so violently spurned them.

“They attacked us like we were terrorists,” he said. “I’m a peaceful person. It’s clear we are not wanted here.”

Astrid Lopez, 14, said her parents were considering returning with her to Honduras. She was at the border bridge during Sunday’s clashes and had choked on tear gas.

“They’re tired and afraid,” she said of her parents.

But Astrid said she has been lobbying them to stay. Only in the U.S., she told them, would she be able to fulfill her dream of getting an education.

The lanky teen, dressed in donated clothes, loved school but was forced to drop out a couple of years ago to start working at a restaurant because her parents couldn’t afford tuition.

Life with the caravan has been an adventure — sometimes terrifying, sometimes fun. The nights in Tijuana have been freezing. And they don’t know what comes next. But that was better, she said, than returning to a fate they knew in Honduras.