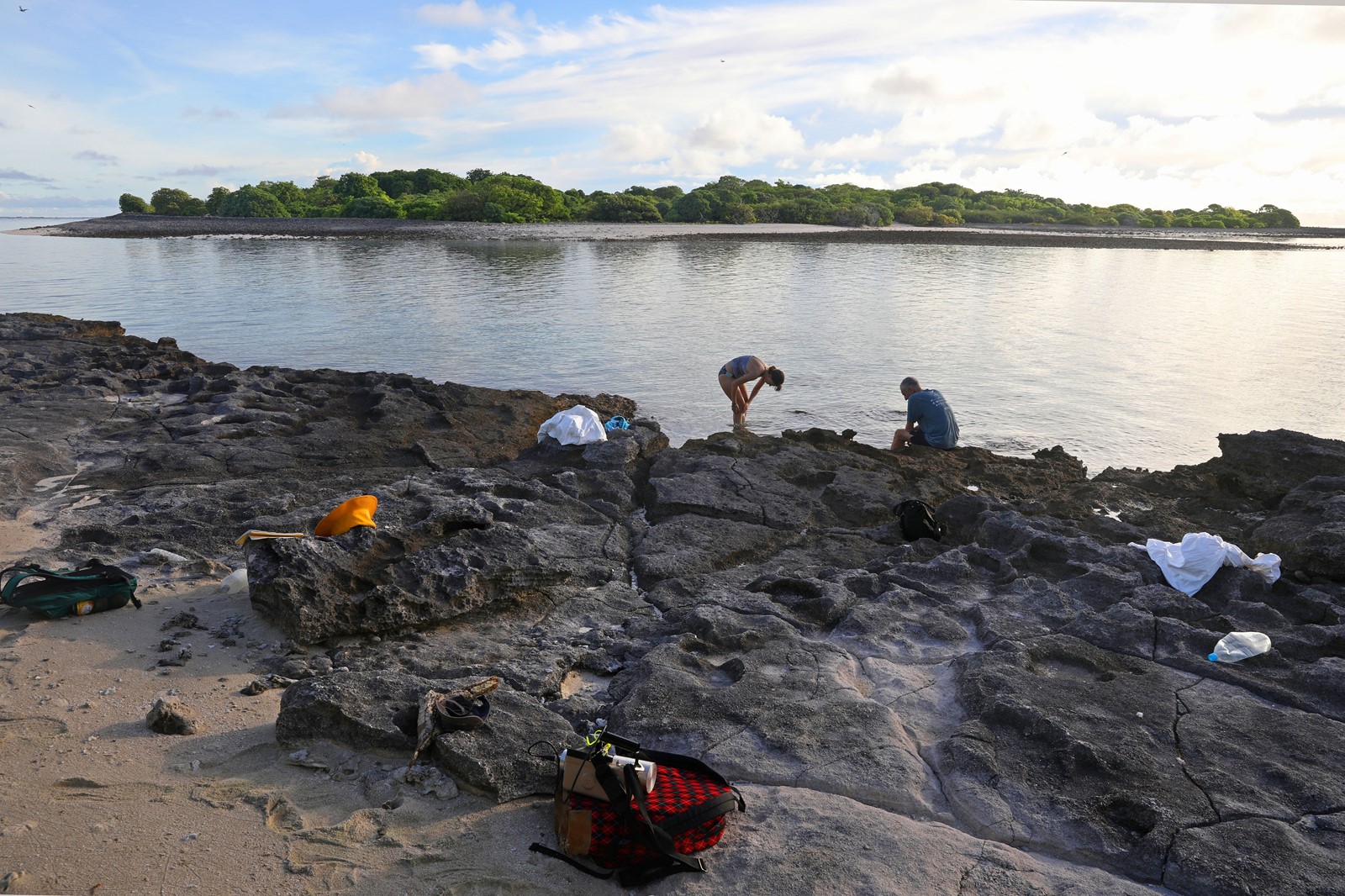 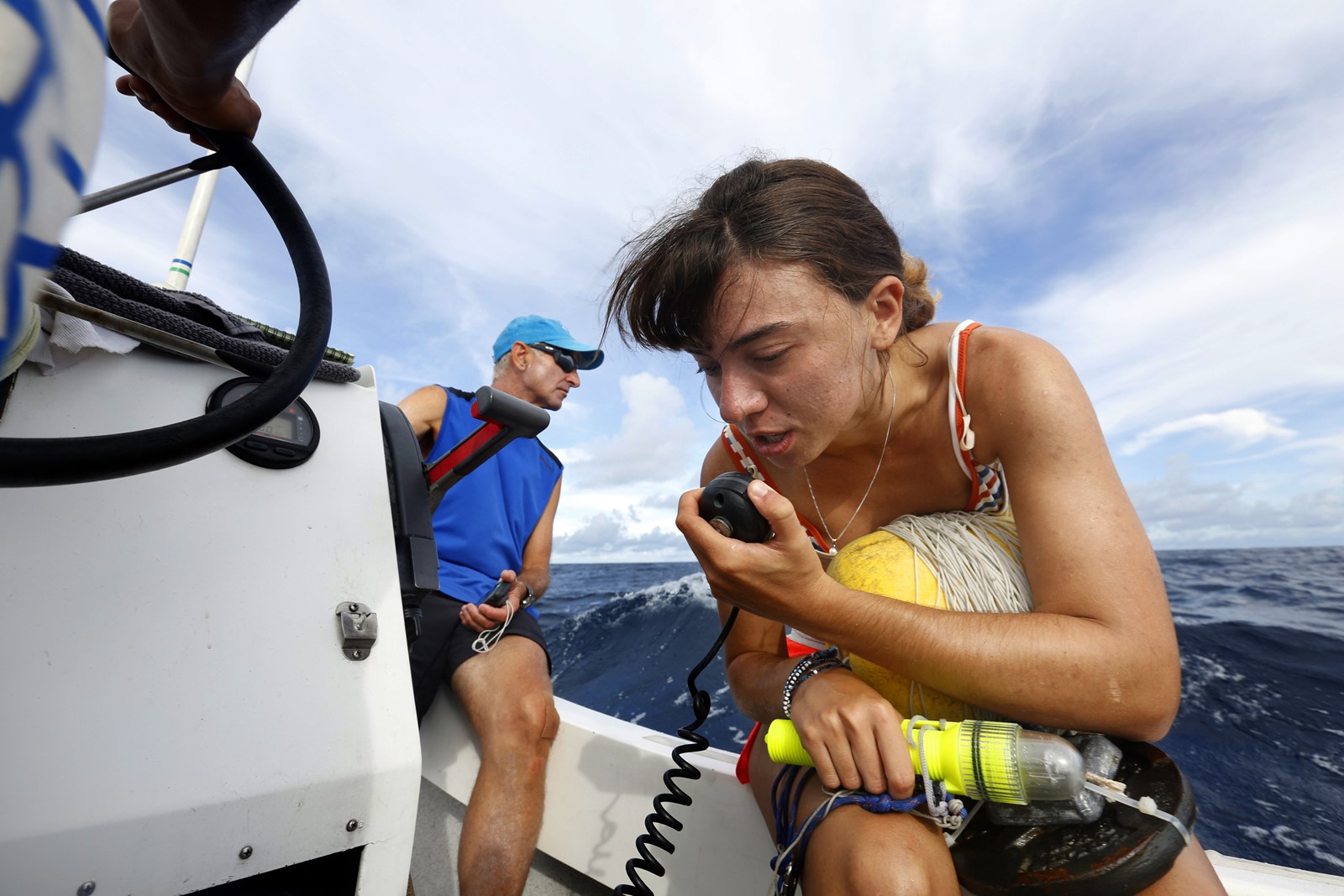 “IT’S IMPORTANT to keep an eye on these ecosystems to see how the residual radiation affects them and the critters living there,” said Sahwell, with Hughes. () 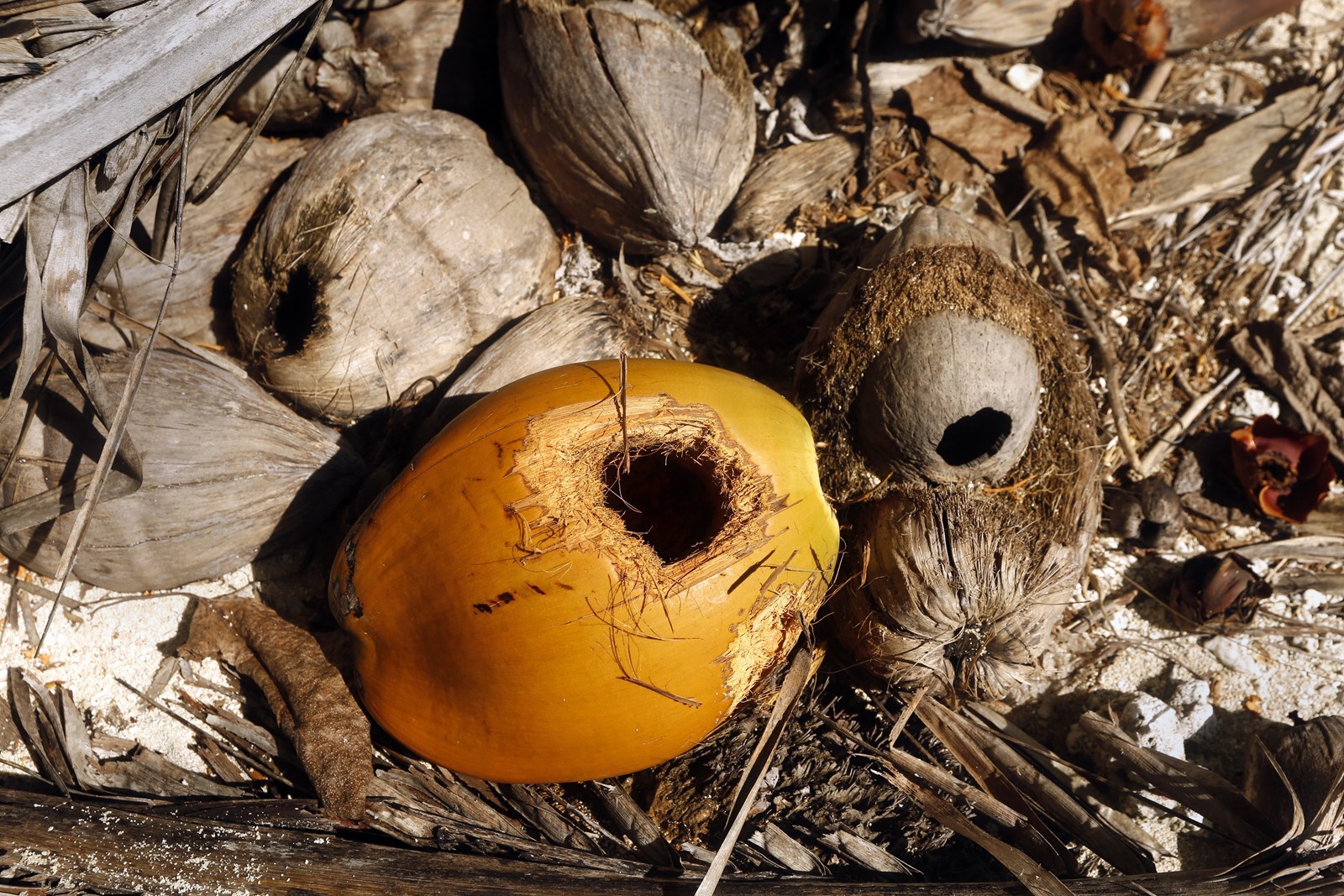 THE RESEARCHERS found a mix of high and variable levels of radioactive contamination of fruit. ()
PREVIOUS IMAGE

Think of the most radioactive landscapes on the planet and the names Chernobyl and Fukushima may come to mind.

Yet research published Monday suggests that parts of the Marshall Islands in the central Pacific, where the United States conducted 67 nuclear tests during the Cold War, should be added to the list.

In a peer-reviewed study, Columbia University researchers report that soil on four isles of the Marshall Islands contains concentrations of nuclear isotopes that greatly exceed those found near the Chernobyl and Fukushima nuclear power plants. On one isle, those levels are reported to be 1,000 times higher.

All four of the islands are currently uninhabited, and three of the four — Bikini, Enjebi and Runit — are in atolls where nuclear testing took place. But one of the islands, Naen, which measures less than an acre, is in Rongelap Atoll, nearly 100 miles away.

Researchers found concentrations of plutonium-238 on Naen, raising the possibility that the island was used as an unreported dumping ground. Plutonium-238 is a radioisotope associated with nuclear waste and not generally with fallout, said Ivana Nikolic Hughes, a coauthor of the research and an associate professor of chemistry at Columbia.

The only other place the team detected this isotope was at Runit, where the United States entombed nuclear waste from bomb testing under a leaking concrete dome.

“We can’t say for sure that [dumping on Naen] is what happened,” said Nikolic Hughes, who directs Columbia’s K=1 Project — a multidisciplinary program dedicated to educating the public about nuclear technology. “But people should not be living on Rongelap until this is addressed.”

The results, published in the Proceedings of the National Academy of Sciences, have reignited debate on the U.S. government monitoring residents’ health in the Marshall Islands and its assurances that locals face little risk from radioactivity.

Some researchers have declared Rongelap safe for re-habitation. But the Columbia study suggests that, for now, people not return to Rongelap or Bikini atolls, where Naen and Bikini are located, until certain areas have been more thoroughly cleaned. More than 600 people have already returned to parts of Enewetak Atoll — where Runit and Enjebi are located.

“We are concerned about what is being consumed on Naen and at what level,” said James Matayoshi, the mayor of Rongelap Atoll. He said he didn’t like the idea of people collecting food from Naen and the islands near it, because he doesn’t know what kind of risk that poses for his constituents’ health.

Others are not so sure the study’s results are valid.

Terry Hamilton, the U.S. Department of Energy’s lead researcher on Marshall Island radiation issues, said although the Columbia team’s approach seemed reasonable given the costs of pursuing such research in a remote part of the world, he was concerned their methodology and equipment could have overestimated the radiation they were detecting.

Both Nikolic Hughes and her husband, Emlyn Hughes, a Columbia University particle physicist and co-director of the K=1 project, rejected claims their methodology was flawed. The intent of their studies, they said, was to provide the Marshallese with an independent assessment — research not considered suspect because it was conducted by a government responsible for the contamination.

“The work provides valuable background information for local policymakers,” said Jan Beyea, a retired radiation physicist who has worked with the National Academy of Sciences but was not involved with the research. He added the results could tip the question of resettlement either way.

“Implicitly, I think these results might caution efforts to return, because of the readings found,” Beyea said. On the other hand, he noted, information that only certain uninhabited islands have levels that exceed agreed-upon safety standards could mean “the return to some places might be made easier.”

The 67 nuclear bombs the United States detonated between 1946 and 1958 left widespread contamination on the Marshall Islands, a set of 29 atolls halfway between Australia and Hawaii. Although the United States conducted only 6% of its nuclear-bomb testing here, the detonations and mushroom clouds generated more than half of the total energy yield from all U.S. testing.

The most massive was the Castle Bravo bomb. It was detonated on the morning of March 1, 1954, and was 1,000 times more powerful than either of the bombs dropped on the Japanese cities of Hiroshima or Nagasaki.

The northern Marshall Island atolls of Rongelap, Enewetak, Bikini and Utirik received the most radioactive fallout from the tests.

U.S. authorities relocated people living on Enewetak and Bikini, where the testing took place, in the late 1940s. Those in Rongelap and Utirik — more than 100 miles from the testing sites — were removed three days after they were showered by fallout from Castle Bravo.

The fallout, which some islanders mistook for snow, caused skin burns, hair loss, nausea and, eventually, cancer in many of the people exposed.

Since then, Marshallese have generally distrusted the U.S. government’s assurances of safety. At Bikini and Rongelap, residents returned to their islands after the U.S. told them it was safe. In both instances, the people were re-evacuated.

For years the U.S. government, with technological help from the Department of Energy’s Lawrence Livermore National Laboratory, has worked to reduce radiation on Rongelap Island — removing soil from around the village and applying potassium to areas where food is grown, which works to prevent plants from taking up radiation.

In 1992, the United States and the Republic of the Marshall Islands entered into a memorandum of understanding that stipulated Rongelap Atoll, which was evacuated in 1954 and again in 1985, could only be resettled when radiation exposure levels — all sources of exposure — fell below 100 millirem per year. That standard, noted Nikolic Hughes, is much less stringent than standards in the United States — where the EPA established a limit of 15 millirem per year for the general population living near the proposed Yucca Mountain nuclear waste repository, for the first 10,000 years.

To provide an independent assessment of safety, the Columbia team examined contamination levels in Marshall Islands food sources, as well as the levels and composition of radioactive isotopes in the Castle Bravo crater.

The National Academy of Sciences on Monday published all three studies — on background radiation, food, and crater sediments.

The food study showed a mix of high and variable levels of contamination on fruit tested on Bikini, Naen and Rongelap islands. Indeed, on all three islands, the fruit contained radiation higher than the safety levels established by Russia, Ukraine, Belarus and Japan, which have more stringent standards for limiting ingestion of radioactive particles than the United States. On Bikini and Naen, some fruits even exceeded the looser U.S. standards.

In the crater study, the team found high levels of radiation in the crater’s underwater sediment, while also observing a surprising number of living organisms — including sea cucumbers, considered a delicacy in many areas of the world.

Curiously, the radioisotope levels found in Naen Island’s soils — about 100 miles away — were roughly the same as those found at the Castle Bravo explosion site.

Last year, a reporting team from the Los Angeles Times traveled with the Columbia researchers and divers as they took samples from the roughly 1-mile wide crater — taking special note of the larger organisms, such as tiger and hammerhead sharks, that often appeared out of the murk.

The crater site, arguably one of the most destructive physical scars of the Cold War, is deceptively peaceful. Nam Island, which is adjacent to the site and was blown in half during the Bravo operation, is home to fairy terns and giant coconut crabs and is a nesting site for sea turtles. Hundreds of just-hatched sea turtles were seen spilling across the beach into the lagoon.

“We have seen firsthand that a lot of these … ecosystems have recuperated [since the explosion], so it’s important to keep an eye on these ecosystems to see how the residual radiation affects them and the critters living there,” said Gemma Sahwell, a 2019 Barnard College graduate who was involved in the research but was not listed as an author.

Combining the results of all the studies — including a 2016 study that looked at background radiation on Bikini, Enewetak, Rongelap and Utirik islands — the Columbia team stated that several of the previously radiated sites in the Marshall Islands appeared generally safe for reoccupation, as long as people didn’t rely solely on locally grown food. Other sites, however, need to be remediated.

Lawrence Livermore’s Hamilton said the crater study seemed legitimate and the food analysis corroborated his own findings. But he raised doubts about the team’s background and soil findings on Naen and Bikini.

According to Hamilton, the standard protocol for taking external gamma ray measurements is to hold a hand-held device about 1 meter above the ground. The closer one gets to the ground, the higher the radiation levels. To be able to compare studies across time and space, researchers must follow the same protocol so they can directly compare results.

“It is not clear that this was done,” he said, adding that the manufacturer of the devices used by the Columbia team — the Ludlum detector system — has noted chronic overestimation of radiation at low levels.

Hughes said the team held the devices at 1 meter, and Nikolic Hughes noted extreme variation in their observations.

“Consistent overestimates would not have produced the patterns that we see,” she said.

Hamilton also disputed the team’s hypothesis about how plutonium-238 was detected during sampling of Naen.

He suggested their sample might have been contaminated during analysis. He said it was also possible the isotope might have been carried over in the fallout from the Castle Bravo detonation — or subsequent tests — in Bikini.

Steven Simon, who is now with the National Cancer Institute but directed his own analyses commissioned by the Marshallese government in the 1980s and ’90s, also expressed skepticism.

Simon, who long voiced the U.S. position that no serious radiation threats remain on the Marshall Islands, said the Columbia studies were “a redo” of the extensive work he and other scientists, including some Marshallese, had previously conducted. He said the authors neglected to mention that work in their current papers.

Hughes said he cited two of Simon’s studies — though not all 60 — and noted that although Simon and his team gathered their own data, they relied heavily on U.S. data and reports, making their work suspect in the eyes of the Marshallese.

The comparisons in the studies being released Monday — including findings that plutonium levels in parts of the Marshall Islands are 15 to 1,000 times higher than those sampled near the Chernobyl and Fukushima power plants — are sure to raise eyebrows.

But the study’s authors note there’s one big difference between the Marshall Islands and other high-profile contaminated sites. At Chernobyl and Fukushima, there are active government efforts to keep people away from the contaminated reactors, whereas islands such as Bikini and Naen are easily accessible by the Marshallese, who traditionally have boated from island to island to collect fruits and other food.

“The Marshallese people deserve an independent assessment from experts on the safety of their islands, starting from collecting raw data all the way to the final analysis and conclusions,” said Hughes, lamenting that even his work could be seen as suspect by Marshall Islanders.

“It would be ideal,” he said, “if there were no U.S. citizens doing this independent study.”