A drought runs through it

Russian River sits at the center of climate-related disasters 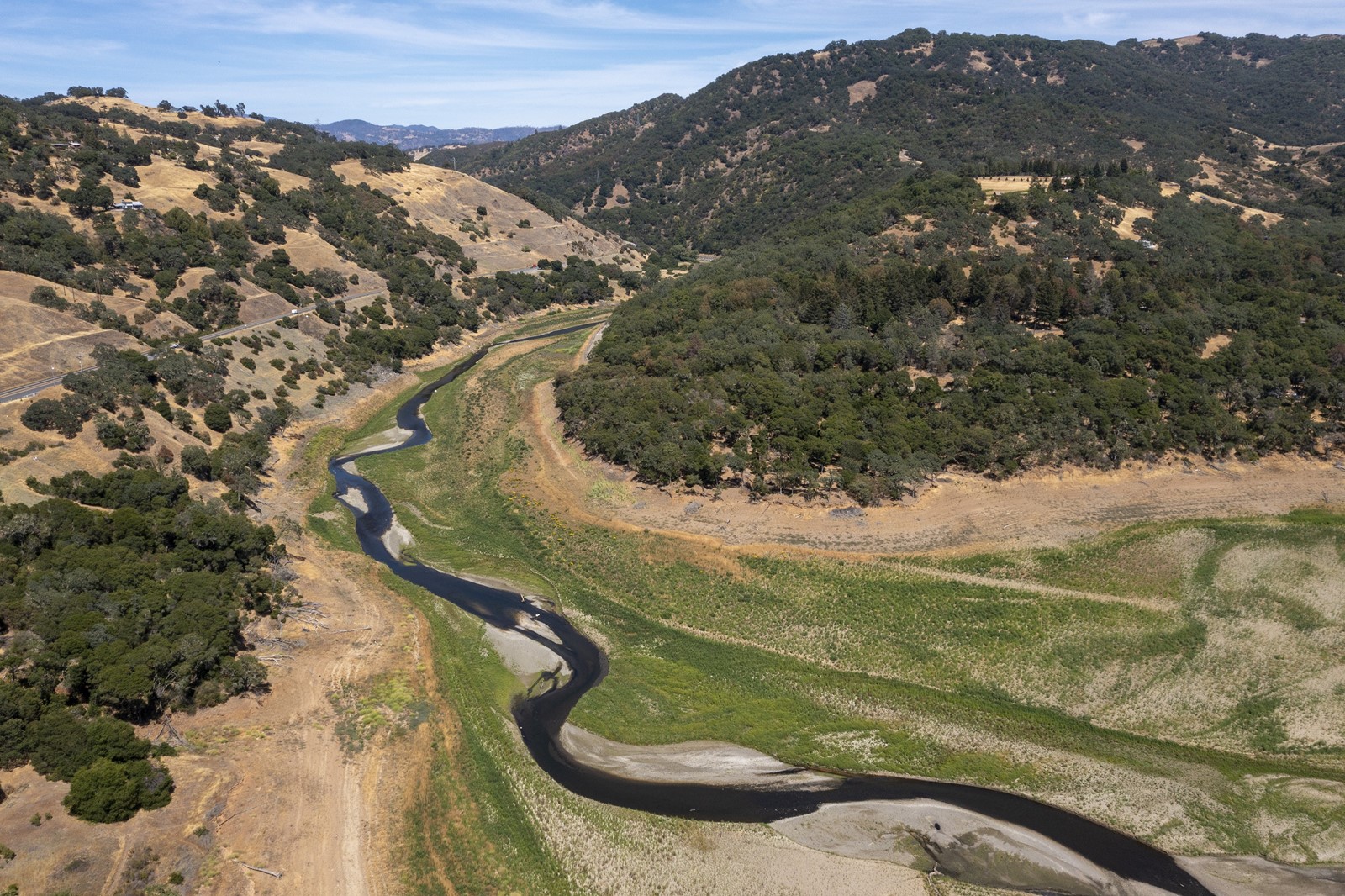 THE RUSSIAN RIVER, now at a historic low, begins north of Ukiah and cuts a winding path to the Pacific. (Photographs by Brian van der Brug Los Angeles Times) 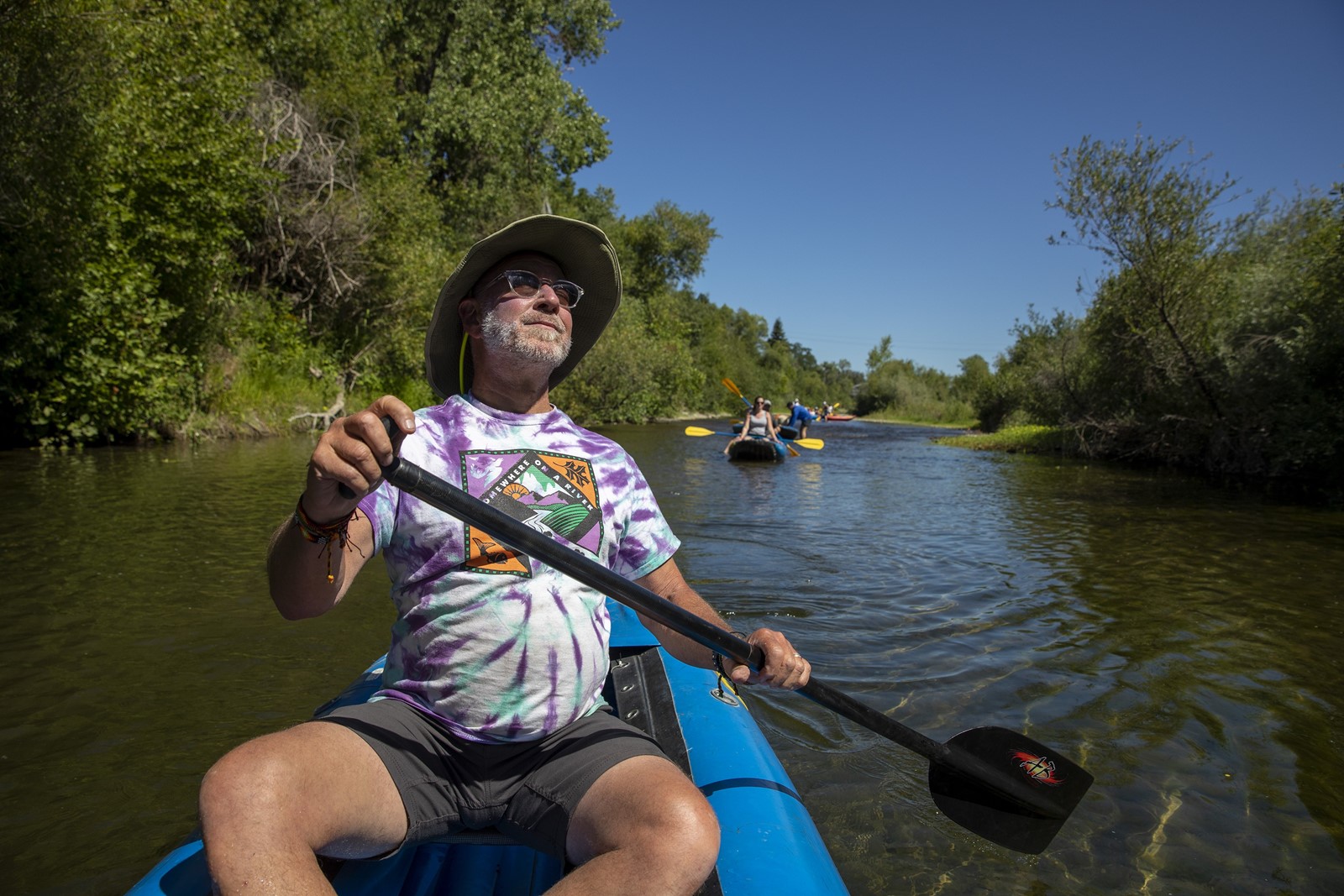 If there was any respite to be found, it was here on the Russian River.

A river otter popped up next to Larry Laba’s inflatable canoe, then dived down with a plop. A yellow swallowtail butterfly, big as a hand, fluttered past.

Yet everywhere were signs of the West’s ever-intensifying drought, with the Russian River taking the early hit.

Laba, the owner of Russian River Adventures, who had paddled this river hundreds of times over 20 years, made note of unfamiliar things that made him uneasy.

The river was at a historic low. A hot wind blew through the canyon, when summer breezes here are usually gentle and cool. The leaves of the cottonwood trees made a brittle, crackling sound. The same trees, way up high, had cracked branches from a devastating flood in 2019.

Just below the water’s surface, Laba noted colonies of an alga he’d never seen. Then there was his worry over algae he couldn’t yet see. In 2015, during a terrible drought, his dog Indy — whom he described as a dumb, happy-go-lucky retriever no one could resist — died of a seizure on the river. The next week, a 2-year-old golden retriever died on one of the trips run by Laba’s company. This time officials pinpointed the cause as a fast-acting neurotoxin from blue-green algae. The algae occur naturally, but when temperatures rise and water is warm and stagnant, they bloom and release poisons.

It also sits at the center of climate-related disasters. After the drought, which ended in 2017, came fires that burned across eight Northern California counties, killing 23 people. In late February 2019, at the tail end of the wet season, rain pelted down without halt. Some of the area’s mountains saw 400% more than the average amount of rain for the month. The river flooded, cresting at 45 feet, the highest in more than two decades. The river valley towns of Guerneville and Monte Rio became islands, with automobile parts and pieces of buildings floating past. Restaurants that sat on cliffs 30 feet above the river were under water.

In August 2020, walls of fire surrounded those same towns as more than 12,000 residents evacuated through smoke and ash. Vineyards burned and beloved cabins turned to tinder. Up and down the West Coast, fires raged, sparked by a combination of extreme heat and a lightning siege. For weeks, this valley — which usually has air so fresh that you can taste the ocean — registered some of the worst air quality in the world.

Laba said he avoids thinking about what all of it — drought, fires, floods, lightning sieges, heat waves — means.

“Look, I can’t go there,” said the 69-year old. “I’m not a worrier. I can’t lay awake at night thinking about climate change. I look around and if there is something I can do — even if I know it won’t make that much of a difference — I do it.”

He spotted tall stalks of scarlet wisteria on the banks, flashing their bright flowers. He beached the canoe.

“They’re huge water-suckers. They’re invasive,” he said, trying to pull up a plant that showed no signs of budging. But Laba pulled and strained until it came up by the roots and couldn’t produce pods to scatter seeds.

That evening, farther downriver, in the small community of Occidental, off Bohemian Highway, Michele Wimborough stepped outside of a cozy restaurant that was as much a dream as a business.

She and her chef-husband, Jim, former Bay Area residents, had searched for years for just the right small town where they wanted to live and raise their son. They opened Hazel, named after Jim’s grandmother, in 2015.

This night was one of their first with in-house dining since before the COVID-19 pandemic, and the restaurant was packed. Earlier, Wimborough had wondered if she’d miss when it was just her family inside, alone, making to-go meals. But she had found herself laughing and happy to be in a crowd.

Now, after the dinner rush, she stood outside, tipped up her face and breathed in a cool mist that was slowly enveloping the town.

Part of the reason was that it gets hot running around a restaurant, but the other was that such moisture was becoming rare.

She had been caught off guard by notices pleading with residents to cut water use by 20% to 40% and the news of an emergency water regulation that cut river water rights for up to 2,300 wineries and farms. The restrictions were aimed at keeping the Lake Mendocino reservoir from going dry before summer’s end. Similar cuts are expected soon in California’s other watersheds.

While she was preoccupied with COVID-19, the drought had sneaked up on her. “I feel like so much has happened that I can’t keep track of it all,” she said.

Just in her tight circle of friends, five families had moved away, people who had planned to stay forever, driven out by fear of disaster.

Wimborough said that by nature she is anxious. But that had changed over the last five years. Now, she steadfastly clings to a stubborn optimism.

“I definitely believe in climate change. But I concentrate on ‘We’re going to keep going and it’s going to be OK’ — until it’s not,” she said.

“I love it here and this is a beautiful moment and I’m grateful we were safe for one more day.”

The Russian River begins in the mountains north of Ukiah in Mendocino County and cuts a winding path to the Pacific Ocean. The Pomo Indians once trapped salmon in its pools, before water was diverted. The river gets its modern name from Russian Ivan Kuskov of the Russian-American Company, who explored it in the early 19th century and founded Ft. Ross. It was the Russians who first planted grapes in the wine region.

Outside Sebastopol, not far from the sea but worlds away from bustle, or even cell service, Eric Sussman, owner of Radio-Coteau, makes wines that he said are meant to capture place and a particular moment in time.

His water comes from domestic wells, not river allocations or a municipality, but the drought gripping this land of red barns, grapevines, goats and sunflowers will still be in this year’s vintage — if they can get the grapes to harvest. Last year Radio-Cocteau barely got the crop in before smoke damage. Many other wineries lost their grapes.

Radio-Coteau’s vineyard is one of the few Demeter-certified estates in the U.S., meaning it meets a set standard for a biodiverse organic farm. That includes methods such as mulching, no-till farming and monitoring moisture to improve soil — something akin to the farming version of holistic healthcare.

Sussman, who studied organic viticulture at Cornell and trained in France, said he considers his farm a living organism in its entirety, plants that become resilient with a good root system.

“There is an intelligence in their ability to adapt,” he said. “It gives me some sense of hope.”

Some vines on his property date to 1945. Sussman said they sustain his faith that seasons will pass and the vineyards will continue.

“I’m not blasé about climate change,” he said. “But I’m not watching all of this from high above. I’m down on the ground right in the thick of it, day by day making decisions about sustainability.”

Nine miles south of Healdsburg, another group of pleasure seekers had paddled down the river.

Mathew Knobel, 19, who works for Laba, was waiting to greet them at the end of their trip with hoots and hollers.

He tried to be supportive when they were visibly stunned by how low the river was, how there were spots where they had to get out of their boats and walk.

“People get really emotional when they see it for themselves,” Knobel said. “It’s almost shock and awe.”

It’s not a reaction he shares.

“To be very honest, in my lifetime, I haven’t been able to experience anything different,” he said. “I’m 19. By the time I was old enough to have a consciousness about climate change, it was here.

“It’s not that I’m not concerned,” he added.

“But to me, drought, fires and floods are what’s normal.”