Administration and congressional leaders race for stimulus deal; Pence and his wife test negative for the virus. 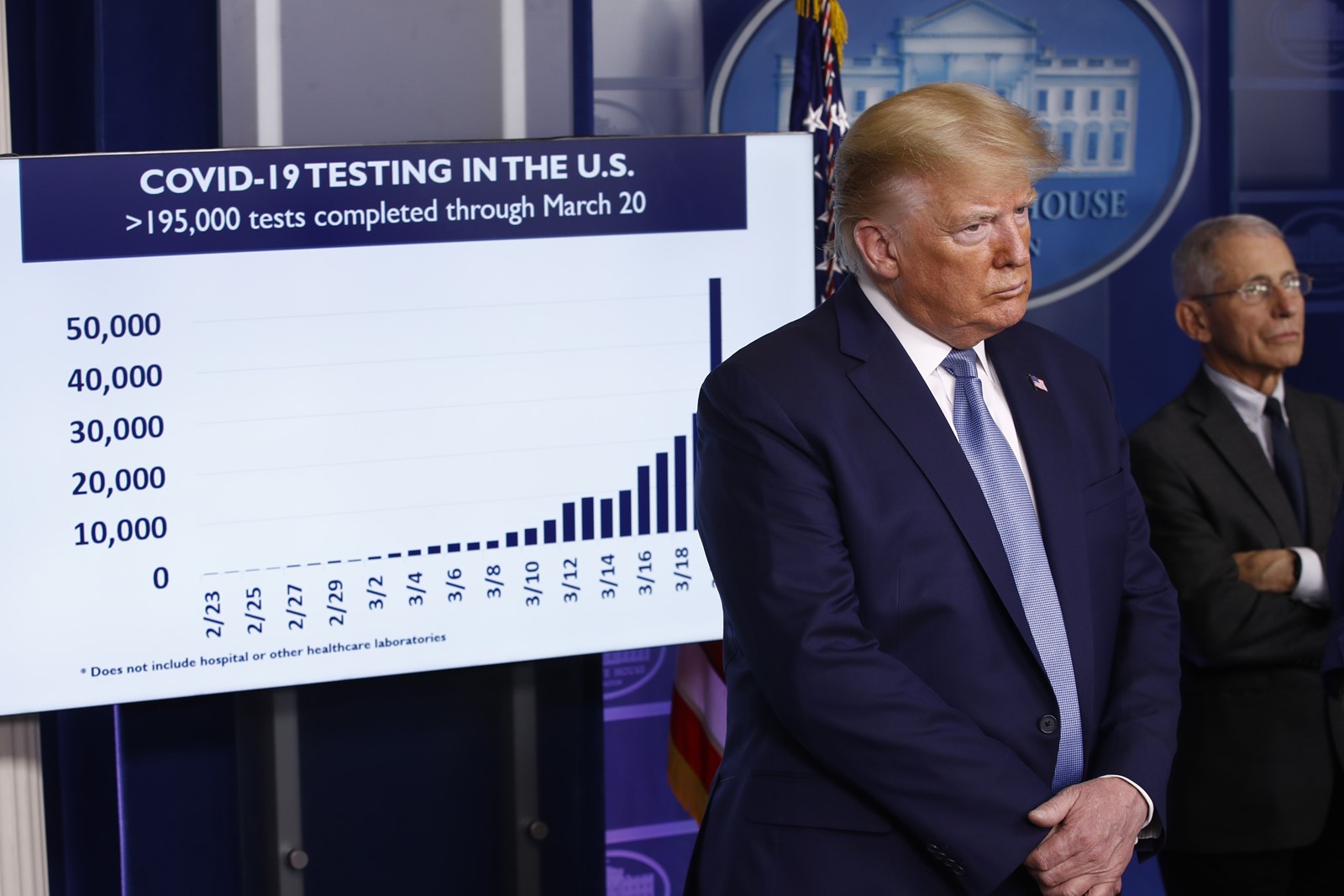 Administration and congressional leaders raced on Saturday to reach agreement on a more than $1-trillion stimulus plan for an economy reeling from pandemic-related closures and job losses, as Vice President Mike Pence and his wife tested negative for the coronavirus after a member of his White House staff proved to be infected.

President Trump said at a White House briefing that negotiators were “working hard” to reach a deal to stem the economic hemorrhaging as the country has nearly shut down to prevent the virus’ spread. Stock markets Friday ended their worst week since 2008 and analysts predict next week’s unemployment claims could set a record.

“I think we’re getting close,” Trump told reporters. In anticipation, the Senate scheduled votes on Sunday to take the first legislative steps to approve a stimulus plan. The price tag probably would exceed $1 trillion; when combined with actions from the Federal Reserve, the stimulus could reach double that, Trump economic advisor Larry Kudlow told reporters.

Senate Minority Leader Charles E. Schumer of New York said Democrats were pressing for a massive investment in public health infrastructure as hospitals fear they will soon be overwhelmed by COVID-19 cases. “We need it right now, not two weeks from now,” he said.

Democrats are also pushing to replenish the treasuries of state and local governments. Schumer warned that they’re “running out of cash and they may soon be broke.”

One of the most controversial issues has been Senate Republicans’ plan to send one or more payments directly to most middle-income taxpayers. Many payments would be $1,200 a person, or $2,400 a couple, and $500 per child. But low-wage workers would receive only about $600.

At the White House, Pence announced that he and his wife, Karen, were to be tested, even as he and the president continued to be on the defensive over the continued scarcity of tests nationwide. Pence, who heads the administration task force on the epidemic, disclosed late Friday that a member of his staff, who was not identified, had experienced “mild, cold-like symptoms” and tested positive for the coronavirus.

The man had not been to the White House since Monday, Pence added, and had no direct contact with himself or Trump. A White House doctor did not believe either of the men had been exposed, the vice president said, but he and his wife were tested in an abundance of caution.

Pence’s press secretary tweeted Saturday evening that the couple had tested negative for the virus.

Trump was reportedly tested for the virus last weekend after having come in contact at his Florida resort with a Brazilian official who subsequently tested positive. The White House reported the test results were negative. Trump, who had initially resisted being tested, said Saturday he was feeling “great.”

In the United States, its rapid spread has put intense pressure on hospitals and healthcare workers, particularly in New York, California and Washington, the states that have been hit hardest.

Public health experts say hospitals and clinics are already running short on scrubs, masks and eye protection that are needed to protect doctors and nurses from infection, as well as ventilators for patients.

To alleviate the pressure, governors and public health officials have urged Trump to invoke the Defense Production Act to compel companies to produce such supplies and to prevent price gouging. The president on Saturday pushed back on such demands after days of conflicting signals about his willingness to consider such a move.

On Wednesday, Trump said he would invoke the law “just in case we need it.” On Thursday, he indicated he had used his authority with several companies. Yet in the same briefing, as on Friday, he said he didn’t need to act because states and companies were acting on their own.

“We have so many companies making so many products,” Trump said Saturday, citing Hanesbrands Inc.’s willingness to retrofit clothing factories to produce masks. “We have the act to use in case we need it.”

A spokesman for Hanes confirmed it was going to produce cotton masks that can be used when more effective N95 respirators and surgical masks are not needed or not available.

Pence said the administration had ordered “hundreds of millions” of N95 masks, respirators that can filter out 95% of airborne particles and are essential to protect medical workers who treat COVID-19 patients. The vice president and other administration officials could not say how soon those masks would get to medical workers.

“We are responding specifically to state requests where the needs arise,” Pence said.

Trump has come under criticism for having spent two months downplaying the threat from the virus on Twitter, at rallies and in interviews, rather than mobilizing his administration to prepare for its spread.

Though his predictions soon proved wrong — on Feb. 27, for example, he predicted there would soon be zero cases of infection — Trump continued to offer rosy assessments. He predicted a vaccine would soon be ready, though experts said one would not be available for more than a year.

The president has also trumpeted the potential use of a drug combination, an antibiotic and a drug designed to treat malaria, even though health officials have cautioned that such medications must be rigorously evaluated before widespread use. Trump tweeted on Saturday that the drugs “taken together, have a real chance to be one of the biggest game changers in the history of medicine.”

Yet Anthony Fauci, director of National Institute of Allergy and Infectious Diseases, later said at the White House briefing that he was “not totally sure what the president is referring to.”

He reiterated his contention from Friday’s briefing that the drugs must be further tested. However, he declined to discourage physicians from prescribing the medicines “in an arena where you don’t have anything that is proven” to treat the coronavirus. “The president is talking about hope for people, which is not an unreasonable thing,” Fauci said.

Trump continued to criticize China, where the outbreak began in late 2019, for not warning the U.S. sooner about its spread. “I wish they could have told us earlier because we could have come up with a solution,” he said. “China was very, very secretive.”

He downplayed praise he heaped on Beijing in January and February, and particularly on its president, Xi Jinping, for the response to China’s epidemic — even as his advisors, among others, criticized the country for covering up bad news.

On Jan. 24 Trump tweeted, “China has been working very hard to contain the Coronavirus. The United States greatly appreciates their efforts and transparency. It will all work out well. In particular, on behalf of the American People, I want to thank President Xi!”