A steady generator of controversy

As activists called for closure of Valley power plant, DWP sat on the fact it was leaking 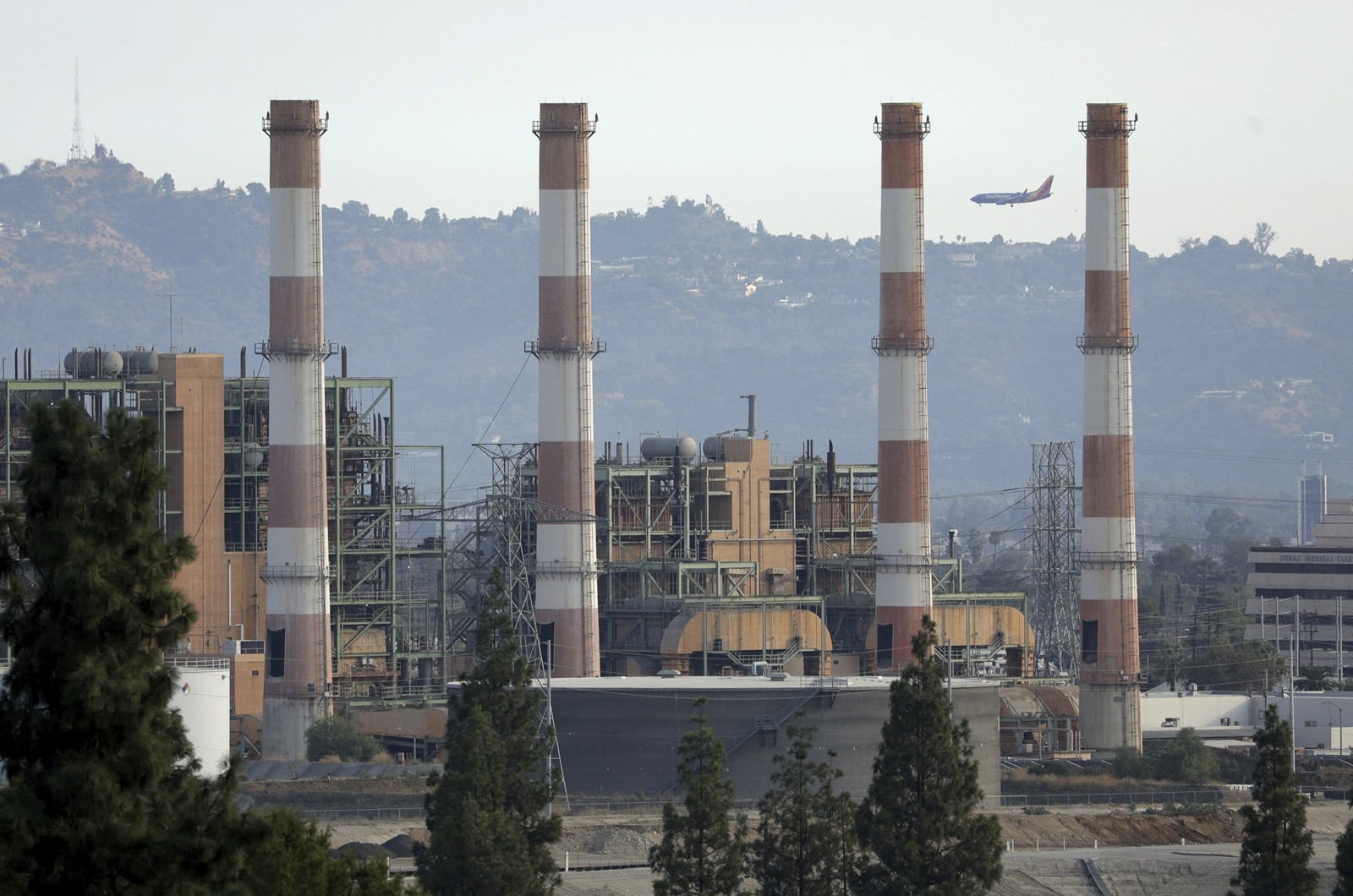 THE L.A. Department of Water and Power’s Valley Generating Station in Sun Valley has been leaking meth-ane for several years. The DWP says it learned of the leak in 2019; it didn’t notify the public until last month. (Photographs by Myung J. Chun Los Angeles Times) 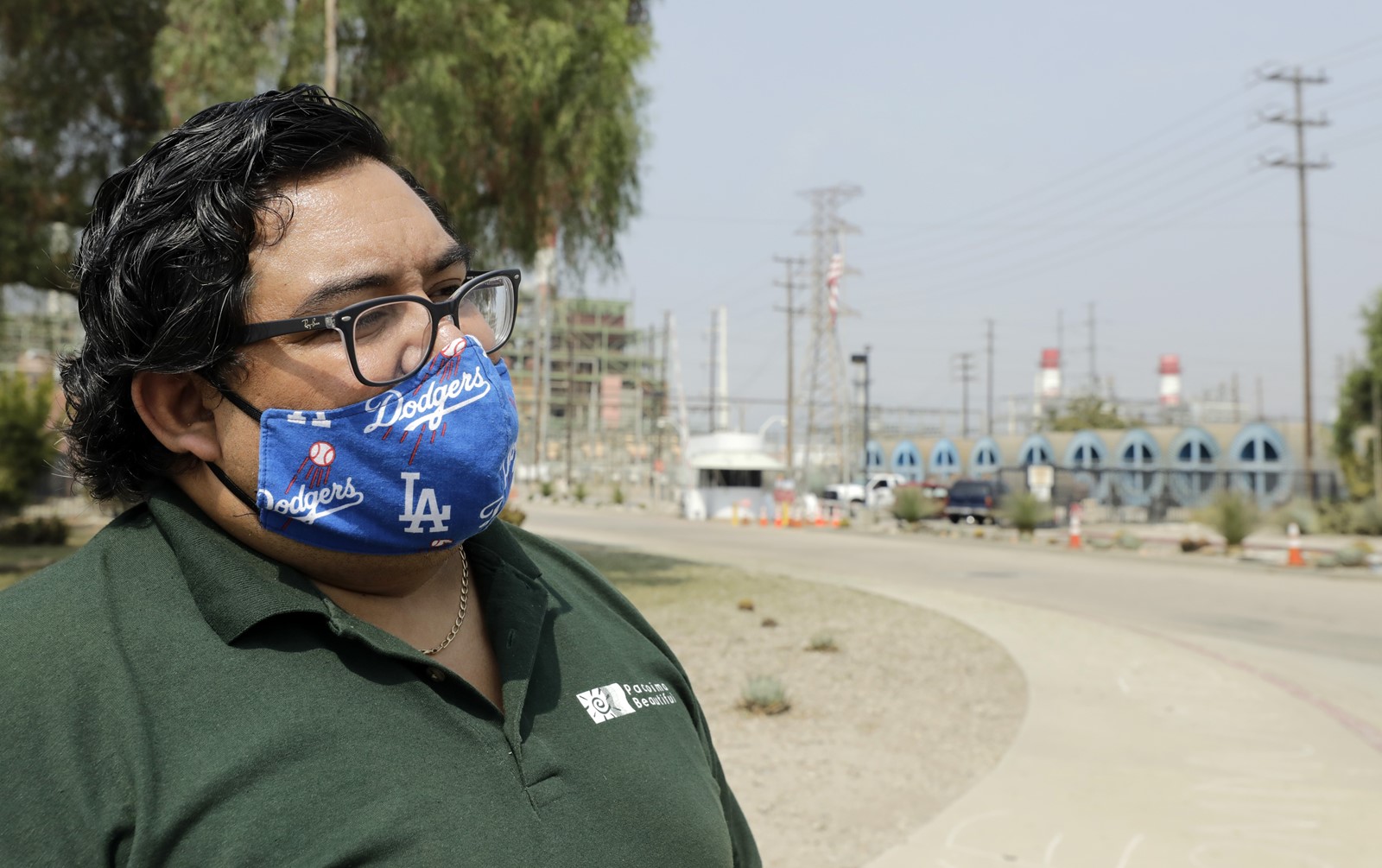 ANDRES RAMIREZ, policy director of Pacoima Beautiful, says the gas leak “really fired up the community” on the conversation of why the plant is still open. () 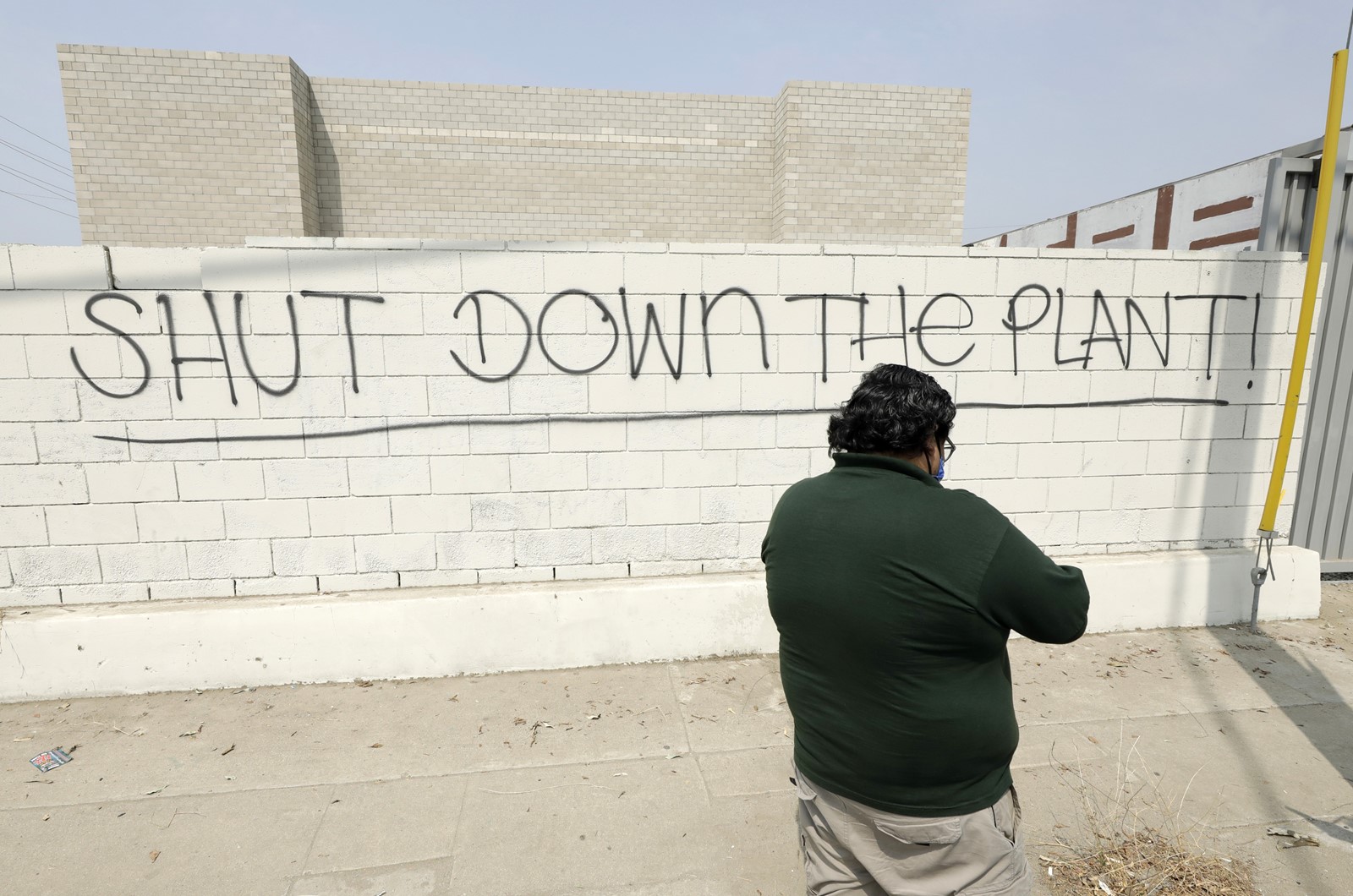 RAMIREZ says this graffiti outside the plant is recent. The gas leak has mostly been stopped, but Ramirez’s group says L.A. needs to move to cleaner energy now. ()
PREVIOUS IMAGE

Andres Ramirez doesn’t know who scrawled the words “SHUT DOWN THE PLANT” across a cinder-block wall outside Valley Generating Station, where red-and-white smokestacks tower over the northeast corner of the San Fernando Valley.

But in a neighborhood burdened by dozens of landfills, recycling centers, junkyards, trucking companies and other noisy and polluting industrial facilities — and bisected by three major freeways — the graffiti artist could have been almost anyone.

Residents of Sun Valley and Pacoima breathe some of California’s worst air and suffer from asthma-related hospitalizations at rates far higher than most of the state. So when the Los Angeles Department of Water and Power revealed last month that its power plant had been leaking methane gas for at least three years, local outrage was loud and swift.

The leak “really fired up the community on this greater conversation of why is this plant even open still,” Ramirez said as he walked past the facility’s main entrance, stepped over sidewalk chalk art reading “KIDS DESERVE CLEAN ENERGY.” He pointed out that the surrounding community is mostly Latino and low-income.

“For Black folks, it’s police kneeling on their necks. For a community like Sun Valley, it’s poisoning you slowly for 75 years,” he said.

Ramirez is policy director for Pacoima Beautiful, an activist group that’s been campaigning for more than a year to shut down the power plant. Members believe L.A.’s transition to cleaner energy sources is moving too slowly and leaving their community behind.

City officials see Valley Generating Station as a critical tool for keeping the lights on when the sun isn’t shining and the wind isn’t blowing — at least until energy storage technologies are cheaper and more versatile.

“The people who live around Valley Generating Station, who breathe the air in that area of the city, which is subject also to other industrial facilities and other sources of pollutants — they are very much supporting the overall efforts to create a more sustainable and green power future,” Adams said. “And so as we often have to rely on Valley more during the course of our upgrades, we realize that the local folks are making somewhat of a sacrifice in support of the overall efforts of the city.”

The fight over the plant’s future is a microcosm of the challenges California faces as it tries to phase out fossil fuels.

The state has set a target of 100% climate-friendly electricity by 2045, in an effort to reduce the planet-warming carbon emissions fueling hotter heat waves, worsening wildfires and rising seas.

California is already more than halfway to 100%, with low-cost solar and wind power — and ever-cheaper batteries — offering a promising pathway to even less reliance on fossil fuels. UC Berkeley researchers reported this year that the United States could reach 90% clean electricity by 2035 at no added cost to consumers.

But getting there will require major investments and a radical rethinking of how utilities provide power.

Last month’s heat wave offered a dramatic illustration of the challenges. California twice resorted to brief rolling blackouts when air conditioning demand stayed high into the evening and the state found itself without enough power to replace all the solar generation that disappeared after sundown.

During the Labor Day weekend heat storm a few weeks later, rotating outages were avoided only because homes and businesses responded to pleas from state officials and used less electricity than expected.

In the meantime, regulators voted this month to allow four gas plants along the Southern California coast to stay open past 2020, an acknowledgment that the state doesn’t yet have the right mix of clean energy resources to shut them down.

DWP staff first notified the public — and its own board of commissioners — about the methane leak in late August. Adams, the utility’s general manager, made the unexpected disclosure during a Tuesday morning board meeting, announcing that staff would be presenting information about “an issue of methane gas at Valley, and work that we’re doing to control methane.”

The plant’s compressor units had been leaking gas “for the last couple years,” one staffer said. The utility had a plan in place to fix the compressors later in the year but decided to go public now because NASA’s Jet Propulsion Laboratory had detected the leak as part of an aerial survey, and “their information is getting more publicized,” Adams told the board.

“I apologize for catching everyone cold,” he said.

Several board members were stunned. So were members of the public. The questions came fast: When did staff discover the leak? Why hadn’t they notified the public earlier? How much methane was leaking from the plant?

There were comparisons to Southern California Gas Co.’s Aliso Canyon gas leak, which spewed record-setting amounts of methane into the air near L.A.’s Porter Ranch neighborhood in late 2015 and early 2016.

“I don’t know if I should be terrified or if this is just regular operating procedure,” Cynthia McClain-Hill, president of the DWP’s board of commissioners, said at the August meeting.

In turned out the Valley leak was small compared to Aliso Canyon’s. At the next board meeting, staff presented slides showing the faulty compressors had been leaking methane — the main component of natural gas — at rates ranging from 168 to 367 kilograms per hour, JPL readings showed. At Aliso, the rate exceeded 50,000 kilograms per hour at times.

Still, methane is a powerful climate-change pollutant, trapping far more heat in the atmosphere than equivalent amounts of carbon dioxide. Researchers have increasingly found that methane leaks from oil and gas facilities are a big contributor to the climate crisis.

Community activists also don’t trust that the DWP is giving them the full story — especially because utility staff said they discovered the leak in August 2019, a full year earlier. Staffers said they didn’t notify the public because they didn’t believe anyone was at risk.

Utility staff also said JPL researchers first detected a methane plume at the power plant in 2017 but didn’t alert the DWP until more recent aerial surveys showed the leak had worsened. Health impacts are another point of contention.

Methane itself isn’t hazardous to human health, except in confined spaces. But natural gas also contains small amounts of cancer-causing benzene, and it generates lung-damaging nitrogen oxides and volatile organic compounds when burned.

Evidence is beginning to emerge of health risks from living near oil and gas facilities.

In July, for instance, a UC Berkeley-led study found that pregnant women in rural California who live within six miles of oil and gas wells are far more likely to give birth to babies with low birth weights. And in Porter Ranch, residents are still reporting health problems years after the Aliso Canyon leak.

“Long-term exposure is going to be more unhealthy than short-term exposure,” said Jasmin Vargas, an organizer with Food and Water Watch, an environmental group that has called for Valley Generating Station to be shut down.

The leak has mostly been stopped. In response to public pressure, the DWP worked with SoCalGas, which supplies the power plant with natural gas, to implement a temporary solution. A permanent fix is planned for November.

Politicians have been applying pressure, too.

A City Council committee approved motions last week calling for the DWP to fix leaks more quickly and install air-quality monitors near Valley Generating Station. A third motion, introduced Tuesday, calls for the creation of a “community amenities trust fund” to benefit people living near the plant, with goals to include helping residents and schools buy indoor air purifiers and air conditioners.

Council President Nury Martinez, whose district includes parts of the northeast San Fernando Valley, slammed DWP officials for making plans to shut down gas-fired generators in coastal communities while allowing methane to leak in the Valley for years.

“I think the department’s success has taken communities like Sun Valley for granted,” Martinez said.

“At no time do we believe we actually had a risk to employees or public health,” Adams told the utility’s board.

Still, DWP officials said they would develop a monitoring program to track air quality around Valley Generating Station and other power plants, and begin notifying surrounding communities of any problems.

“We have an obligation to keep our neighbors informed,” Adams said. “And we absolutely should have done so.”

Los Angeles gets about 30% of its electricity from natural gas, with the bulk of that power coming from Valley Generating Station and gas plants in Playa del Rey, Long Beach and Wilmington. Last year, Mayor Eric Garcetti killed a plan to invest billions of dollars prolonging the life of 10 generating units at those coastal plants. The 10 generators will shut down over the next decade.

But the DWP had already “repowered” several other gas generators at the coastal plants, which could keep running for decades.

Those gas plants — along with an out-of-state coal plant that’s scheduled to close in 2025 — are one reason L.A. had so much power on hand during last month’s heat wave that it was able to provide spare capacity to the rest of the state, helping avert larger outages.

“We pulled out all the stops,” said Reiko Kerr, the DWP’s senior assistant general manager for power system engineering. Still, even as the DWP continues to lean on coal and gas, it’s moving aggressively toward cleaner energy. Nancy Sutley, the utility’s chief sustainability officer, said the utility expects to generate 96% to 97% of its electricity from climate-friendly sources by 2036.

In that scenario, Sutley said, Valley Generating Station and other gas plants would still be online — but they would operate rarely, most likely on extremely hot days when electricity demand would be highest.

Will that be good enough? Gov. Gavin Newsom suggested this month that the state’s 100% clean-energy target should be moved up from 2045 in light of the climate-influenced wildfires ravaging the American West. Democratic presidential nominee Joe Biden’s climate plan sets a goal of 2035.

Los Angeles is evaluating the 2035 time frame as part of a 100% renewable-energy study with the National Renewable Energy Laboratory, a federally funded research lab.

The study isn’t finished — final results are expected in the next few months — but preliminary findings suggest that accelerating the 100% timeline from 2045 to a decade earlier could double the costs.

“You have to think about what’s the incremental benefit of accelerating,” Sutley said.

The activists fighting to shut down Valley Generating Station have an answer to that question.

Ramirez pointed to a bitter irony: Even as the power plant helped Los Angeles avoid electricity shortages, heat-related equipment failures caused many nearby residents to lose power during last month’s extreme heat. From Aug. 14 through Aug. 20, about 7,500 DWP customers in Pacoima and Sun Valley experienced outages, more than almost anywhere else in the city.

“Our stance is very clear. There needs to be a shutdown of gas operations, period,” Ramirez said.

“The time for innovation is now.”