Trump will see a lot of love — for Bush

to attend, but not to address, the funeral of a predecessor whom he openly ridiculed. 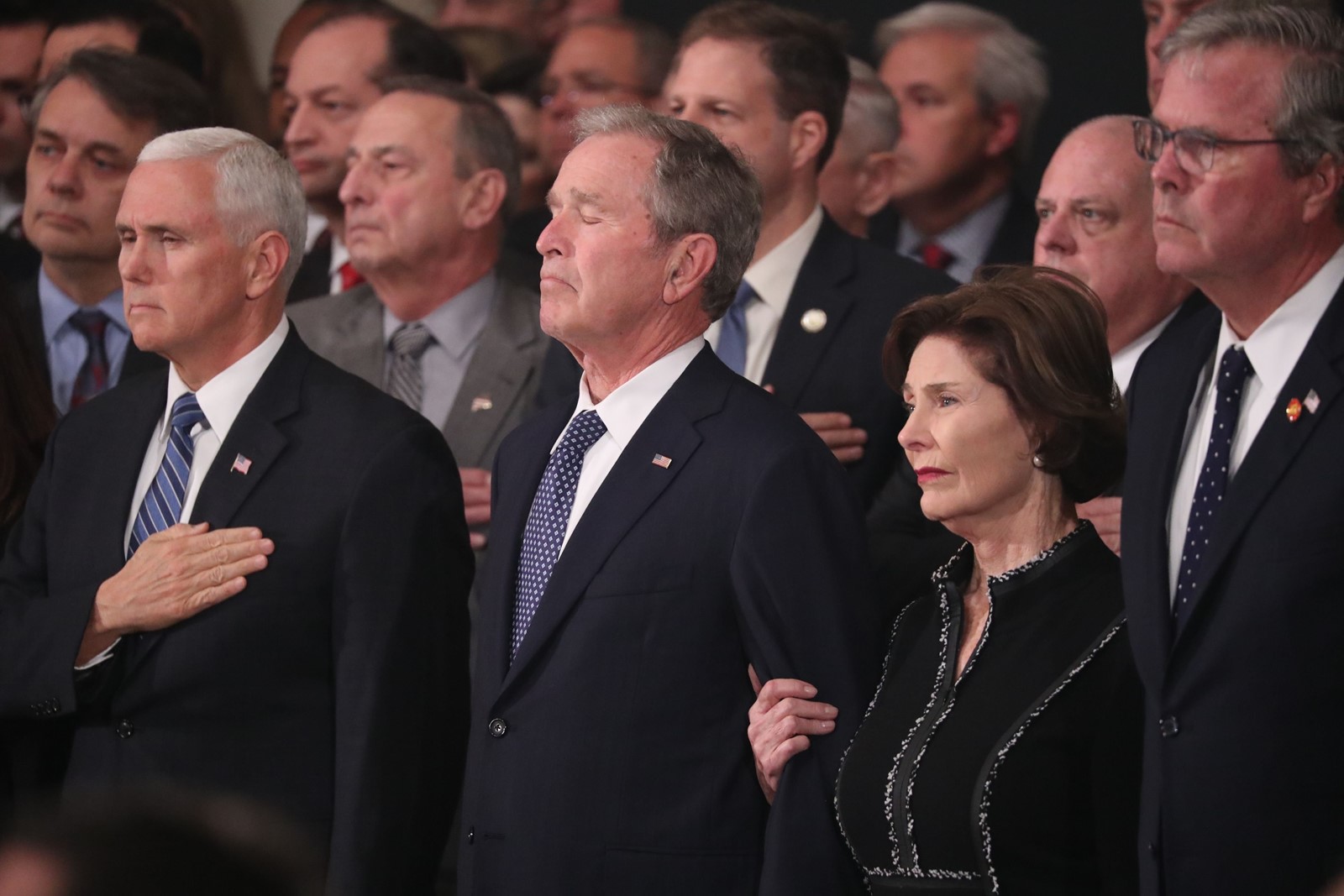 As America celebrates the life of President George H.W. Bush and the “kinder and gentler” era in politics he represents, the current president, who rose to power in open mockery of that style of democracy and who hates to surrender center stage, will have to endure the tributes from a pew in the audience.

President Trump plans to attend Bush’s state funeral Wednesday but is not scheduled to speak, according to the list of eulogizers released by the Bush family on Monday, marking the first time in nearly half a century — since President Nixon failed to eulogize Lyndon B. Johnson — that a sitting president has been left out of the memorial of a predecessor.

The omission will put the cultural and personal gulf between Trump and Bush and what they represent in sharp relief. It will force the White House for the second time in a little over three months to deal with inevitable and unflattering comparisons to a well-liked predecessor.

Unlike Sen. John McCain, whose family kept Trump out of his funeral entirely and used the September service to highlight their differences, President Bush and his family chose not to make a loud statement with his funeral, even though Trump built his political brand in large part by mocking the Bushes and everything they stood for.

Presidential funerals are planned years in advance, with even the most mundane details accounted for. Bush, who believed strongly in the dignity of the office, appears to have sided with history in welcoming Trump to attend, preserving decades of tradition when it comes to sitting presidents.

“His respect for the presidency meant that, just as he wanted President Trump invited to his funeral, he was always trying to figure out how to make it work,” said Sen. Rob Portman, an Ohio Republican who early in his career worked in Bush’s administration and last visited him in September at Bush’s family retreat in Maine.

Trump has been fighting the Bush family since he knocked off Jeb Bush, the former Florida governor and George H.W. Bush’s second son, in the 2016 presidential primary. Trump mocked him as “low energy,” and then built momentum by bashing older brother George W. Bush’s invasion of Iraq as “the single worst decision ever made.”

Moreover, Trump’s central economic policy is a repudiation of the North American Free Trade Agreement with Mexico and Canada. The pact was negotiated by George H.W. Bush, and Trump has called it “stupid,” a “disaster,” “job-killing” and the “worst trade deal” ever made.

In choosing nominees for staff positions and judgeships, Trump is known to look askance at people who served in the administration of either Bush, though Trump has found it impossible to blackball all of them, given their prevalence in Republican politics.

Even as the eldest Bush grew older, frailer and more well-liked by the American public, Trump continued his assault on the family, choosing a few months ago to mock Bush’s signature slogan for volunteerism as the silliest form of “presidential” rhetoric and a contrast to his own nationalist branding.

Trump has kept such insults at bay since Bush’s death Friday night, releasing a magnanimous statement and canceling a news conference in Argentina planned for Saturday, which he said was out of respect.

But as Bush remembrances dominated cable news Monday, and the former president’s casket made its way from Texas to the Capitol, where he would lie in state, Trump let off a slew of angry tweets about the special counsel investigation that has engulfed his presidency, displaying his reluctance to put his own grievances on hold amid the mourning.

Trump’s allies say he is likely to be on his best behavior during the tributes to Bush, however, in gratitude that he was at least invited to the funeral.

Marc Short, a former legislative affairs director for Trump, predicts the media will make more of the comparisons with Bush than Trump will.

“Sometimes, I think, people assume that he’s more thin-skinned,” Short said, “and I think the reality is he will honor that generation, and he will honor the life of President Bush too.”

Caputo, who worked for Bush as well, said the Bush family had arguably more reason to resent Trump than did the family of McCain, whose military service was mocked by Trump.

“Yet the entire Bush family has pushed that aside because that’s the kind of people that they are,” he said. “That will have a remarkable effect on President Trump as it does on all of us.”

Former presidents tend to see their public approval rise as their tenure slips further into the rear view. And Bush is no exception. A February poll by Gallup showed his approval at 64% — higher than any living ex-president at the time and third highest among the last 10 presidents.

Trump, by contrast, has suffered some of the lowest approval numbers of any recent president through much of his tenure, usually at least 20 percentage points below Bush’s.

His allies say he is merely a casualty of a rougher moment in politics, rather than, as his critics charge, a symbol and cause of the nation’s polarization.

“Nobody likes to be rebuked,” said Barry Bennett, a former campaign advisor, predicting Trump’s reaction to the Bush tributes. “They’re both products of their time, and certainly President Bush, who I personally love, was a product of a much kinder, gentler time. He certainly would not enjoy being in the White House today.”

But Bennett believes Bush is also a symbol of the rejection Trump has long felt from the establishment, despite his efforts to brand himself as a wealthy celebrity.

“Donald Trump, I think, has always thought he’s not been treated fairly by the patrician class, if you will,” Bennett said. “When they wouldn’t let him in their clubs, he built his own.”

Indeed, in 1988, when Trump openly campaigned to be Bush’s running mate, Bush saw the lobbying, one of the first signs of Trump’s political ambition, as not only unseemly but also ridiculous.

But it was not just in style that the two men differed. Bush painstakingly built an international coalition to invade Iraq. He worked to expand NATO when the Soviet Union fell.

He so much valued international cooperation that his critics accused him of ignoring domestic concerns.

Trump once called NATO obsolete and has ridiculed other international pacts as signs of American stupidity and weakness.

Portman, who stood quietly in the rear when he attended his one and only Trump rally in his home state in October, is one of many in his party caught between the two men’s visions for the presidency and the Republican Party.

“Donald Trump ran a presidential campaign saying all those things, and he won Ohio by 8 points,” Portman said, reflecting on some of the insults Trump lobbed at the Bush family and others.

“President Bush respected that. He respected the presidency. But he also looked for ways to work together.

“Maybe this weeklong celebration of reaching out and modesty and those Greatest Generation attributes,” Portman added, “will help us all reach out.”