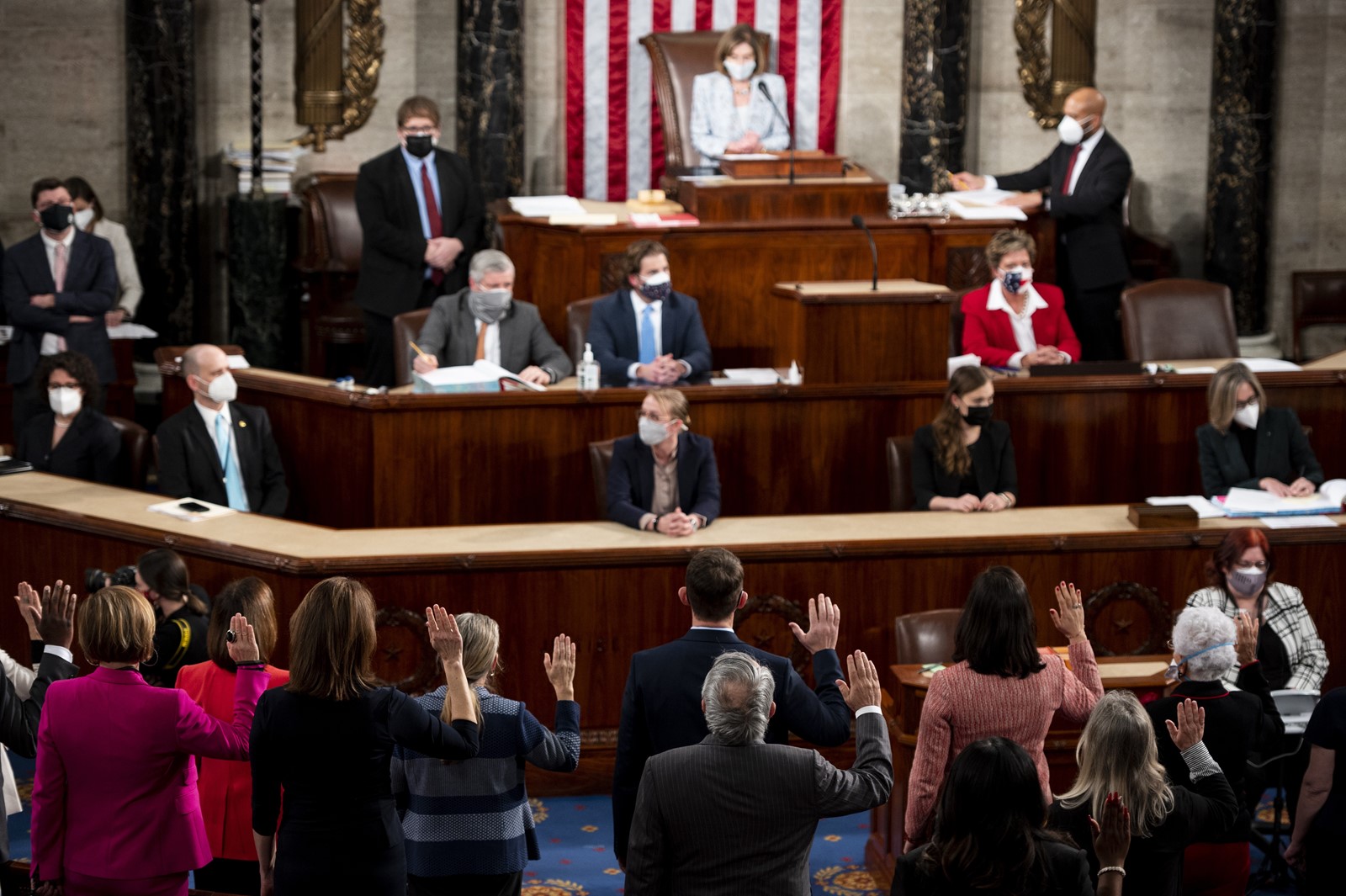 HOUSE SPEAKER Nancy Pelosi (D-San Franscisco) administers the oath of office to members of the 117th Congress at the Capitol in Washington on Jan. 3. (Bill Clark Pool Photo)
PREVIOUS IMAGE

Before they take office, elected officials swear to uphold the U.S. Constitution. But what happens when they are accused of doing the opposite?

As some Republicans continued to back President Trump’s doomed effort to overturn the election, critics — including President-elect Joe Biden — accused them of violating their oaths and instead pledging allegiance to Trump.

The oaths, which rarely attract much attention, have become a common subject in the final days of the Trump presidency, invoked by members of both parties as they met Wednesday to affirm Biden’s win and a violent mob of Trump supporters stormed the U.S. Capitol.

“They also swore on a Bible to uphold the Constitution, and that’s where they really are stepping outside and being in dereliction of duty,” said former New Jersey Gov. Christine Todd Whitman, a Republican who served as administrator of the Environmental Protection Agency during the George W. Bush administration. “They swore to uphold the Constitution against all our enemies, foreign or domestic, and they are ignoring that.”

The oaths vary slightly between government bodies, but elected officials generally swear to defend the Constitution. The U.S. Senate website says its current oath is linked to the 1860s, “drafted by Civil War-era members of Congress intent on ensnaring traitors.”

Alaska Sen. Lisa Murkowski, a Republican, vowed to honor the oath she took and affirm the results of the presidential election while urging colleagues to do the same. In a video posted to social media, Republican Sen. Todd Young of Indiana can be seen telling Trump supporters that he took an oath to the Constitution under God and asking, “Do we still take that seriously in this country?”

Corey Brettschneider, a political science professor at Brown University and author of “The Oath and the Office: A Guide to the Constitution for Future Presidents,” said that the oath must be taken seriously and that Americans have to demand its enforcement or “the risk is to the entire system.” He said he would support censures, a formal statement of disapproval, for officials who clearly violated their oaths.

“The worst that could happen is that people roll their eyes at the oath and they say, ‘Oh, none of them mean it,’ and I think what we’ve got to do at a time of crisis is exactly the opposite — is to say, this does mean something,” Brettschneider said. “When you break the law, you need to be held to account, and that’s what’s really up to the American people — to be outraged when Trump does what he’s done.”

Republicans who have filed or supported lawsuits challenging Biden’s win in November have claimed, without evidence, that the election was rigged against Trump. Their cases have failed before courts all the way to the U.S. Supreme Court. Republican and Democratic officials have deemed the election results legitimate and free of any widespread fraud.

The oaths were mentioned often Wednesday during a joint session of Congress meant to confirm Biden’s victory. Some Republicans who launched objections to the election results claimed their oaths required them to do so, and Democrats urged their counterparts to honor their oaths and affirm Biden as the next president.

“The oath that I took this past Sunday to defend and support the Constitution makes it necessary for me to object to this travesty,” said Rep. Lauren Boebert, a newly elected Republican from Colorado.

As lawmakers met, violent protesters loyal to Trump stormed the Capitol in an insurrection intended to keep Biden from replacing Trump. While authorities struggled to regain control, Biden called on Trump to abide by his oath and move to ease tensions.

“I call on President Trump to go on national television now to fulfill his oath and defend the Constitution and demand an end to this siege,” Biden said.

The GOP effort to block the formal confirmation of Biden’s win eventually failed after Republicans recycled arguments of fraud and other irregularities that failed to gain traction.

Democrats were quick to condemn Republicans who continued to oppose the results.

Rep. Adam B. Schiff (D-Burbank) asked, “Does our oath to uphold the Constitution, taken just days ago, mean so very little? I think not.” He added that “an oath is no less broken when the breaking fails to achieve its end.”

Rep. Cori Bush, a Democrat from Missouri, said she would introduce a resolution calling for the expulsion of Republicans who moved to invalidate the election results.

“I believe the Republican members of Congress who have incited this domestic terror attack through their attempts to overturn the election must face consequences,” she tweeted. “They have broken their sacred oath of office.”

Michigan Atty. Gen. Dana Nessel, a Democrat, said officials who continued to support Trump’s baseless claims of fraud violated their oath, and their rhetoric emboldened the rioters who stormed the Capitol.

“They have an allegiance that they have sworn — not to the Constitution and not the United States of America, but to one man, and that man is Donald Trump,” she said. “And they refuse to walk away from that no matter what he says, no matter what he does, and I think history will not judge them kindly for that.”