Virus-positive Turner ‘emphatically refused to comply’ with league security when he returned to field. 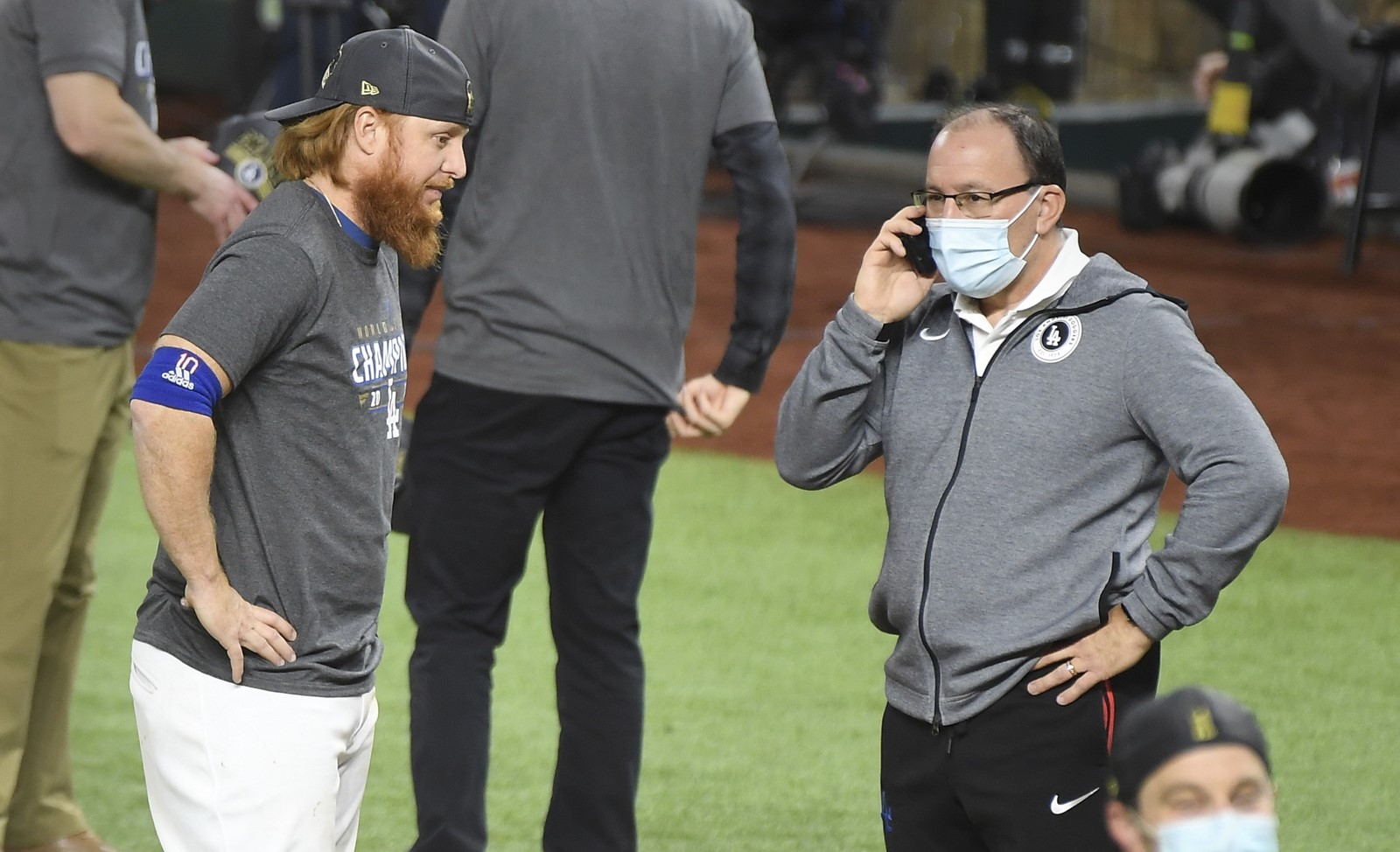 JUSTIN TURNER did not keep a mask on during the postgame celebration despite his positive test. (Wally Skalij Los Angeles Times)
PREVIOUS IMAGE

Major League Baseball in a statement Wednesday said Dodgers third baseman Justin Turner refused to adhere to rules when he returned to the field to celebrate the Dodgers winning the World Series on Tuesday after his positive coronavirus test.

The league stated that officials received word of Turner’s positive test during the game, which prompted them to order the Dodgers to remove Turner. The team was informed during the seventh inning and Turner was officially replaced at third base in the eighth. Turner wasn’t on the field for the Dodgers’ trophy presentation but later emerged to celebrate with the team.

“Turner was placed into isolation for the safety of those around him,” the league’s statement read. “However, following the Dodgers’ victory, it is clear that Turner chose to disregard the agreed-upon joint protocols and the instructions he was given regarding the safety and protection of others.

“While a desire to celebrate is understandable, Turner’s decision to leave isolation and enter the field was wrong and put everyone he came in contact with at risk. When MLB Security raised the matter of being on the field with Turner, he emphatically refused to comply.

“The Commissioner’s Office is beginning a full investigation into this matter and will consult with the Players Association within the parameters of the joint 2020 Operations Manual.”

An initial round of postgame tests Tuesday night turned up no additional positives among players on the Dodgers or the Tampa Bay Rays, The Times learned. Another round of testing took place Wednesday. One Rays family member tested positive.

Players and families from both teams cleared after testing boarded flights to Los Angeles and Tampa Bay on Wednesday afternoon.

The Dodgers and the league have spoken with Los Angeles County public health officials, who would be responsible for determining whether any players and family members would need to quarantine upon return to Southern California.

Turner returned to the field about an hour after the game alongside his wife, Kourtney, and posed for pictures near the pitcher’s mound holding the Commissioner’s Trophy. He was quickly approached by a member of MLB’s security team but remained on the field.

Turner initially kept his mask on, sauntering around the infield as teammates approached him for an embrace. He and Kenley Jansen shared a long hug. The Curacao flag that hung from Jansen’s shoulders became draped around their sides.

As the team gathered for a photo with the trophy minutes later, Turner waited for the rest of the players to get into position. Then he plopped down in front, about an arm’s length away from teammates in either direction. He removed his mask and smiled for the camera.

Before the photos were completed, manager Dave Roberts came rushing onto the field, having just completed his postgame video call with reporters. He went right up to Turner and sat down beside him, mask also off, laughing and smiling as the final shots were taken.

Then, Turner stood up and began strolling around the infield again, his mask still removed. Andrew Friedman, Dodgers president of baseball operations, who’d also removed his mask for the team pictures but had by then put it back on, approached Turner near the first base line. They talked for a few minutes before Turner went back to his wife. Turner and his wife took a photo together with the trophy and walked off the field.

The league’s health and safety protocol mandates that when a team is informed of a positive test while a player is at a ballpark, the player must “immediately isolate himself” in the isolation room within the ballpark.

While the league investigates how Turner was able to return to the field, rather than the hotel and quarantine there, the league also is investigating how a player came to test positive in a bubble environment.

The league, at least at this preliminary phase, does not believe a fan might have spread the virus to Turner, given the limited seating capacity and 20-foot minimums between players and fans prescribed for the World Series and NLCS. The hotel might be a likelier source, given the two reported infections so far: Turner and the wife of someone in the Rays’ traveling party.

Although Turner could be disciplined, the league appears more concerned with reinforcing how seriously the protocols need to be followed. Turner himself took charge of spreading that message among the Dodgers players in late July in response to a widespread outbreak interrupting the Miami Marlins’ season.

That Turner returned to the field to celebrate was far more concerning than any of the decisions the league made during the game, Emory University epidemiologist Zachary Binney said.

Despite the MLB statement, Binney said Turner was not the only party at fault.

Binney said he understood how frustrated Turner must have been, to reach the pinnacle of his career after so many years, only to be sidelined. However, Binney said, the Dodgers and MLB should have promised him a celebration at another time and place.

Otherwise, he said: “What you’re saying is, it was worth standing next to somebody with COVID, who we know is infected and likely is infectious, without a mask, in order for them to celebrate and get in a picture.”

When MLB learned of an inconclusive test result for Turner in the second inning, the league expedited the processing of a pending test, one that had been taken earlier Tuesday. The game continued, with Turner still playing.

The league regularly received reports of inconclusive tests, according to a person familiar with the testing program.

Generally, the league received the reports from one day’s tests before games had started the next day. The results from Turner’s Monday test were received during the game Tuesday because the lab had flagged something irregular and ran two tests on the sample. At that point, the league ordered the lab to run immediate tests on the sample submitted Tuesday, which came up positive.

Binney said inconclusive tests aren’t uncommon, and, given the context, there was no reason for MLB to order Turner’s removal at that point or to halt play. He said the league also played it right in ordering Turner into isolation without stopping play for the final two innings.

“They were unlikely to continue to spread it that much by finishing that game, certainly from the Dodgers to the Rays,” Binney said. “You would expect that any transmission from Turner to other people in the organization had happened both recently and already, so that playing the rest of the game arguably would not result in more spread among the Dodgers.”

MLB officials have declined to say what would have happened had the Rays won Game 6, with a potential Game 7 scheduled Wednesday night. The league said only that it would have reviewed test results and consulted with medical experts Wednesday morning.

As the regular season wound down, MLB’s protocol was to shut down a team once a player had tested positive and wait a few days to ensure the virus had not spread throughout the team. At that point, however, players were neither tested daily nor in a bubble.

Binney, commenting on the possible Game 7 scenario, said careful contact tracing would have shown how many players had been in close contact with Turner, and the league would then have had to choose between quarantining those players or postponing the game.

“I don’t think the game would have necessarily had to be canceled,” he said. “But they would have had to do something very disruptive.”

The Dodgers did not make Turner available for comment.