Kavanaugh’s Supreme Court hearing shows growing partisanship, but reveals little about his views on the law. 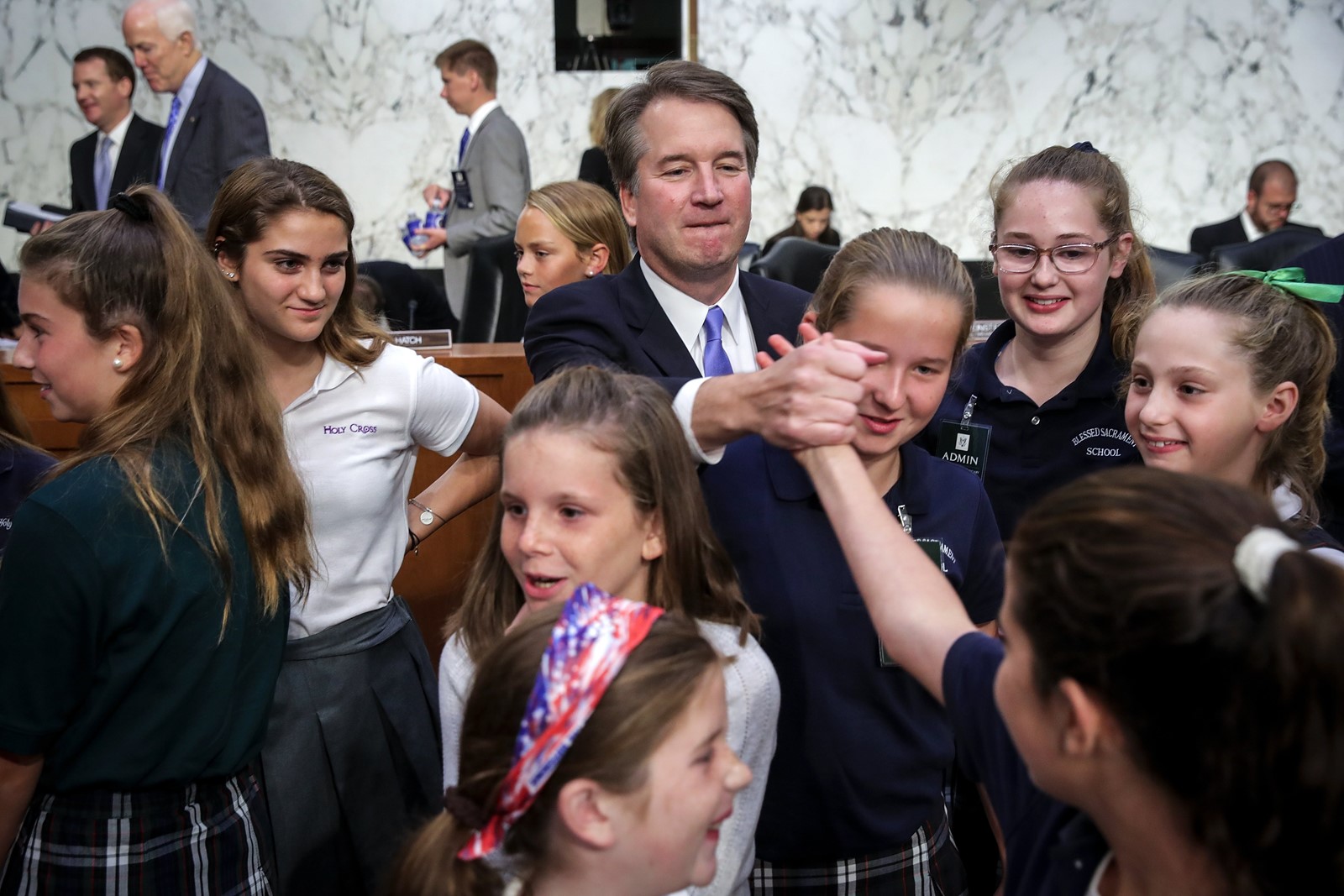 This week’s Senate hearing for Supreme Court nominee Brett Kavanaugh lived up to — or perhaps down to — expectations for how modern-day justices are confirmed.

A sharp partisan divide was on display from the first minute and lasted until the bitter end. In an unprecedented move on the first day, Democrats tried to shut down the hearing by complaining that Republicans were withholding documents about Kavanaugh’s record. Republicans accused Democrats of political grandstanding.

When it was all over, the highly qualified and reliably conservative judge was headed for approval in the Senate Judiciary Committee, albeit with Republican votes only.

“This surely has been the most contentious hearing since [Clarence] Thomas” in 1991, said University of Georgia law professor Lori Ringhand, who has written a history of court confirmation hearings. “Cooperation among the committee members seems to have completely broken down.”

She said the hearing continued the trend of revealing less and less about a nominee’s views. “Kavanaugh seemed to provide firm answers to even fewer substantive questions than [Justice Neil M.] Gorsuch, who provided fewer firm answers than any nominee for decades. In my opinion, this strips the process of much of its value.”

The Thomas confirmation in 1991 had stood alone as unusually contentious for two reasons. Thomas was a 43-year-old black conservative with a thin record when he was tapped to succeed Justice Thurgood Marshall, a civil rights legend. And after a week of hearings, the public learned that Anita Hill, a former aide, had accused him of sexual harassment. Nonetheless, Thomas won confirmation on a 52-48 vote in a Senate controlled by Democrats. He then joined a court where most of the justices had won unanimous Senate confirmation, including Antonin Scalia and Anthony M. Kennedy.

Sen. Lindsey Graham of South Carolina was the lone Republican on the Senate Judiciary Committee to support Obama’s nominees. On Thursday, he bemoaned the raucous partisanship.

“People wonder,” he said, “are these hearings turning into a circus?” But Graham said this was not fair nor accurate. “Circuses are entertaining, and you can take your children to them. This hearing is neither entertaining nor appropriate for young people.” He referred to the regular shout-outs from protesters who were dragged from the hearing room.

Senators from both major parties often speak of their desire for a “neutral” judge who will simply follow the law and rule fairly without bias. But their actions tell a different story.

All the Republicans joined together in 2016 to block even a hearing for a highly qualified Obama nominee, Chief Judge Merrick Garland of the D.C. Circuit Court of Appeals.

Now all the Democrats, at least on the committee, are united in their opposition to Kavanaugh to fill the seat of the recently retired Kennedy, the high court’s swing justice.

Conservative scholars credited Kavanaugh with a strong, steady performance amid the partisan squabbling. “He is an experienced, thoughtful and intelligent mainstream judicial conservative. I do not believe we learned anything new about him, but we have learned a bit about the new normal in terms of collegiality in the Senate and the depth of activists’ frustration with the administration,” said Notre Dame law professor Richard Garnett.

Women’s rights advocates and liberal scholars were not reassured by his testimony. “Our fears about the future of this country deepened this week when Judge Kavanaugh repeatedly refused to answer questions about his views on abortion, employment discrimination, immigration and healthcare. Our civil rights, dignity and autonomy will be in grave danger if he is confirmed,” said Fatima Goss Graves, president of the National Women’s Law Center.

Elizabeth Wydra, president of the progressive Constitutional Accountability Center, pointed to the jarring contrast between Kavanaugh’s public praise for the Brown vs. Board of Education school desegregation ruling and his private White House memos deriding affirmative action policies. “Seeing him use words like ‘naked racial set-aside’ and ‘racial spoils system’ to refer to race-conscious measures intended to redress entrenched systemic racism is upsetting,” Wydra said.

Trump promised to appoint justices who would vote to overturn the 1973 Roe vs. Wade ruling that established a woman’s right to choose abortion, and Democrats pressed Kavanaugh to explain his views. He repeatedly said Roe was a “precedent,” but would not say it was correctly decided.

But he described the 1974 ruling in United States vs. Nixon, which required the president to turn over the Watergate tapes, as correct and one of the great moments in the court’s history.

Cornell law professor Michael Dorf was a clerk for Kennedy in 1992, when the court reaffirmed the right to abortion in Planned Parenthood vs. Casey, and said Kavanaugh’s comments did not signal he would uphold abortion rights.

“Understood in context, he said very little,” Dorf said, except that Roe and Casey are precedents. “There is good reason to think that in addition to Justice Thomas, Chief Justice Roberts and Justices [Samuel A.] Alito and Gorsuch would overrule Roe if presented with the opportunity,” he said. If so, he said, Kavanaugh could supply the fifth vote.

When asked about same-sex marriage, Kavanaugh took a different approach that may be significant. He spoke of a passage from Kennedy’s opinion in June in the Masterpiece Cakeshop case that endorsed equal rights for gays and lesbians. Kavanaugh noted correctly that nearly all the justices, including the leading conservatives, signed the opinion, which — as he paraphrased it — said that “the days of treating gay and lesbian Americans, or gay and lesbian couples, as second-class citizens or inferior in dignity or worth are over in the Supreme Court. That’s a very important statement.”

Sen. Kamala Harris (D-Calif.) had asked him to say whether the 2015 ruling in Obergefell vs. Hodges legalizing same-sex marriage was correctly decided. It is a “yes or no” question, she said.

Kavanaugh refused to answer, repeating his statement that a nominee should not give a “thumbs-up or thumbs-down” response to recent rulings.

Leading gay rights advocates said they were not reassured. They noted the court in the Masterpiece case ruled that the Colorado cake maker was treated unfairly based on his Christian beliefs. Sharon McGowan, a lawyer for the gay rights advocacy group Lambda Legal, said Kavanaugh’s “bobbing and weaving to avoid endorsing Obergefell speaks volumes. It signals not only to us, but also to his most fervent supporters, that he is prepared to grant religious opt-outs from nondiscrimination laws that are designed to protect LGBT people and their families.”

In the next year, the court is likely to take up another religious rights case, possibly from a florist in western Washington state who refused to provide flowers for a same-sex wedding. The court’s conservatives are likely to look favorably on her claim for a religious exemption from the state’s civil rights law.

But there is no sign the court’s conservatives are interested in revisiting the issue of same-sex marriage. Abortion remains highly disputed, and several Republican-led states are likely to enact bans on abortion that will send the issue back before the court.

However, conservative lawmakers are not pressing to enact new bans on same-sex marriage, and as Kavanaugh’s comment suggested, there is no reason to believe such a challenge would be welcome at the high court.