Far from pacing the floors at home during the pandemic shutdown, the super-rich are fleeing into seclusion in style 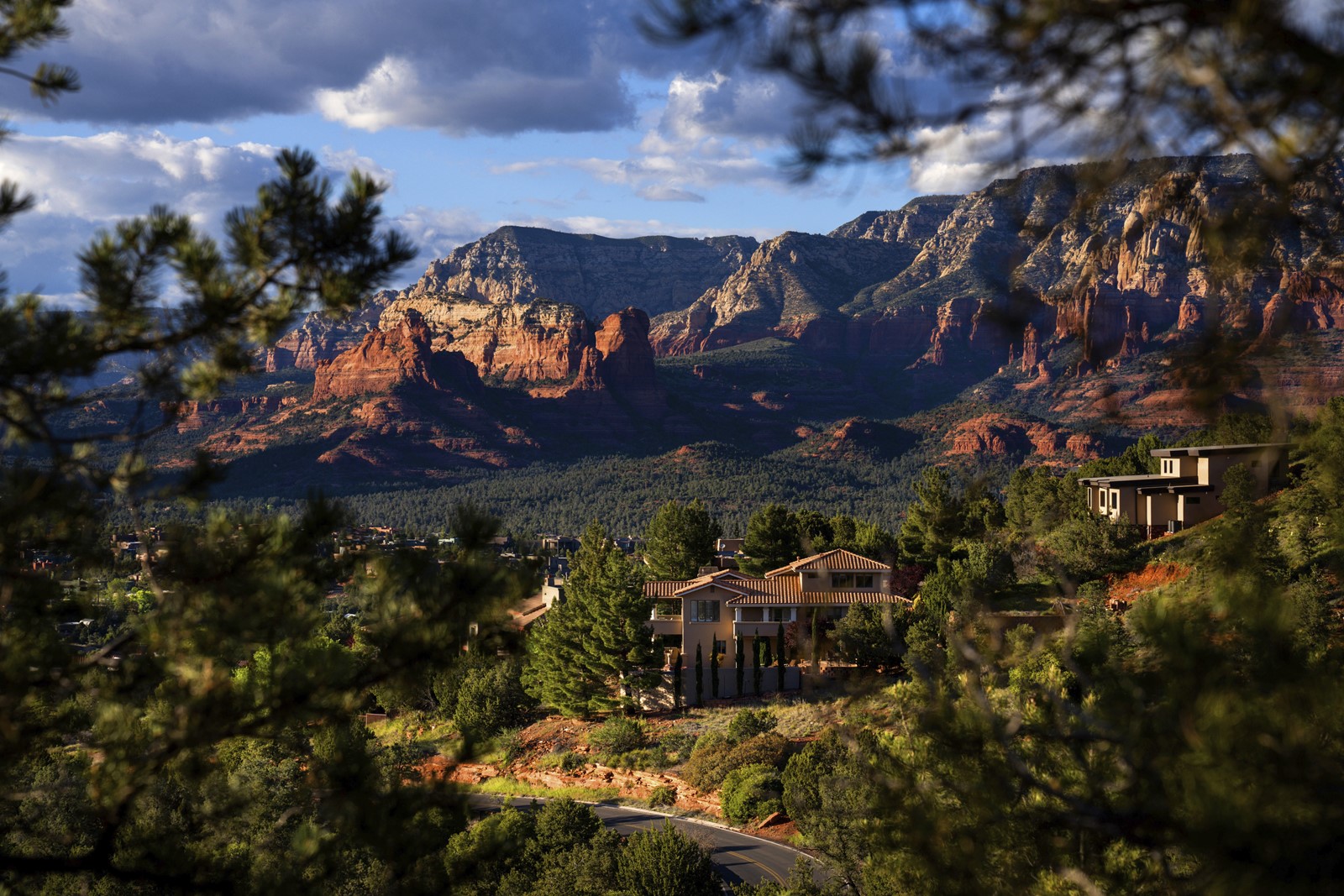 THE WELL-TO-DO have fled big cities during coronavirus shutdowns, heading for their vacation homes or $8,000-a-month rentals in enclaves like Sedona, Ariz., arriving by private planes and other safe means. (Photographs by Kent Nishimura Los Angeles Times) 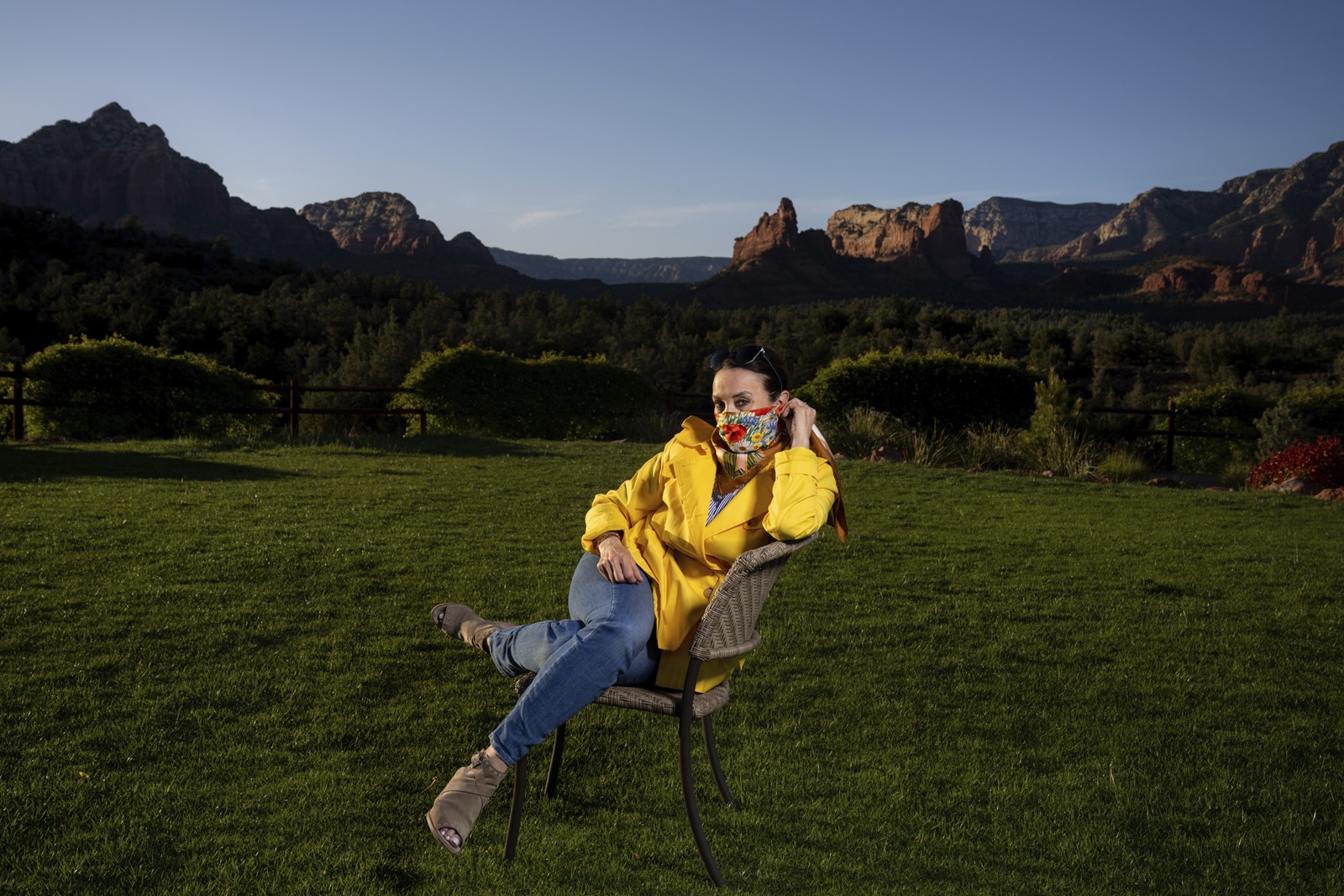 Lisa Dahl scanned the horizon from the patio of one of her five restaurants, watching thick clouds cast shadows on red rock spires that formed outlines like desert skyscrapers.

The restaurateur stood in the afternoon silence, a rarity at Mariposa, billed as the best fine dining in a town about two hours from the South Rim of the Grand Canyon. She thought about what life was like here, on this patio, before the coronavirus.

Reservation only. New Yorkers. Angelenos. Investment bankers. Tech entrepreneurs. They sipped stiff cocktails and snapped photos in front of a backdrop so picturesque it looked Photoshopped. As they savored bites of $48 veal chop, they talked about how next time they were in town, they’d have to try the flourless chocolate chile orange torte with vanilla bourbon gelato.

Such scenes have been relegated to nostalgia as a deadly pandemic has upset an enclave that was once kept sequestered only by money. But the virus has also exposed the stark divide between the rich and everyone else in a nation whose disparities are marked by spiraling joblessness and luxury cars racing through the desert air.

Dahl has adjusted to Sedona’s rearranged lifestyle, setting up a delivery service catering to those who have flocked to their second homes in this high-desert valley to ride out the stay-at-home restrictions.

“There are people who love the food and are willing to spend,” Dahl said on a recent afternoon as she cradled Leonardo, her Maltese-poodle. “These are trying times for many people, but many people are also very blessed.”

As the coronavirus continues its destructive path across the U.S., killing more than 53,000 and devastating the economy — drive-up food bank lines snake on for miles, and about 26 million have filed for unemployment in what could become the highest jobless rate since the Great Depression — some well-heeled Americans have activated pandemic escape plans.

On Fisher Island — a 216-acre luxury destination south of Miami Beach that’s home to one of the nation’s richest ZIP Codes — management paid more than $30,000 for 1,200 employees and residents to be tested for coronavirus antibodies. A similar testing effort took place in the mountain resort town of Telluride, Colo. By contrast, governors of many states have struggled to secure an adequate number of tests.

Hollywood billionaire David Geffen recently posted an Instagram photo of the sun setting behind his 454-foot yacht in the Caribbean.

“Isolated in the Grenadines avoiding the virus,” he captioned the photo. “I’m hoping everybody is staying safe.”

Faced with fierce criticism, he swiftly made his account private. Some small, quiet towns have started to post “Keep out” signs — a message to those fleeing cities — and mayors have publicly urged people to stay away.

On a recent afternoon at the Sedona Airport, a strip of asphalt atop a mesa overlooking the city, three private jets sat parked. Sedona’s mayor, Sandy Moriarty, has made a plea to potential visitors: Please stay home. She told a local TV station that she’d seen social media photos of tourists packing into local camping grounds and popular hiking trails.

“It’s incredible,” she said. “It really is crowded — it’s too crowded.”

This stretch of Arizona has seen fewer than 100 diagnosed cases of the coronavirus infection, but some locals worry that numbers could spike if too many travel here. And that could mean more devastation, they worry, for locals who have already suffered deep economic losses.

During the pandemic, Dahl said, she’s had to cut back from 345 employees at her restaurants — among the largest employer in Sedona — to 45.

“This situation pains me for my employees,” she said, noting that some had worked for her for more than a decade. “I’ve poured my heart into these restaurants and so have they.”

Last year, her five restaurants grossed $20 million, she said, and she was on track to have an even better year in 2020. Then came the outbreak and, within a matter of days, she had to scale back and adjust to a new reality.

On a recent afternoon, Dahl put together a high-end version of a care package for two New York dermatologists. They’re among her best clients, she said, and they had planned to leave Manhattan earlier this month for Sedona. She shipped them a few familiar tastes from her Sedona restaurants — macaroons, marinara sauce and tomato soup.

A thousand miles from Sedona, at Surf Pines, a gated community northwest of Portland, Ore., is another quiet, stay-at-home haven, with houses overlooking the Pacific Ocean.

Gina Sjolander, her husband and their three adult children are hunkered in their second home, where they pass the days playing board games, gazing out across windswept dunes as elk wander by, and ordering takeout from the Astoria Golf & Country Club.

They’re visiting from the Seattle area — the first hot spot for the virus in the U.S. — where Lil’ Jon Restaurant & Lounge has been in their family for three generations.

The restaurant is closed for now.

“For us,” Sjolander said, “it hasn’t been too much of a hardship.”

Head a couple hours south along the coast to Lincoln City, Ore., and you’ll find Diana Hardy, a cashier at a grocery store. She spends her days sweating behind a mask and wiping down counters with bleach.

“I feel in danger every day,” said Hardy, 66, a coastal resident since 1986. “Those of us that live here full time and wait on them are the ones that are at risk.”

Much of Oregon’s shoreline, and Washington state’s coastal Pacific County to the north, remains off-limits to outsiders. Lincoln County, where Hardy lives, and Clatsop County, where the Sjolanders stay in their second home, have only 11 confirmed coronavirus cases between them, and no deaths.

But coastal residents remain suspicious of outsiders, all too aware that other parts of Washington and Oregon have more than 15,000 confirmed cases of the virus and a death toll of 900.

Hardy acknowledges that owners of second homes are entitled to stay in their properties, although she wishes that more of them would stop traveling back and forth between houses.

Claire Hall, a Lincoln County commissioner, says a gulf has appeared between the haves and the have-nots.

“There’s a class strain, in that people see privilege in those who can afford a second home,” Hall said. “But asking people to stay away is not that great a sacrifice, when you’re talking about people’s health and in some cases their lives.”

Similar wariness is on display in Big Sky, Mont., a resort community north of Yellowstone National Park renowned for its ski slopes.

“For a while if you went to the market and saw a license plate that said Minnesota, California or Illinois, you’d get curious, maybe a little afraid,” said Eric Ossorio, who moved to the town from Connecticut nearly three decades ago. “Luckily, the spike in infections one may have feared hasn’t happened.”

Still, the region hasn’t escaped unscathed. There are at least 145 confirmed cases of the coronavirus in Gallatin County, the hardest-hit in the state and home to Big Sky and Bozeman, the fourth-largest city in Montana.

At the exclusive 15,200-acre Yellowstone Club community, where empty, half-acre lots start in the millions and attract CEOs and business moguls, management emailed members in the middle of the March ski season, telling them to cancel plans. Several were already on their properties, though, and have stayed there since.

Resort foundations have now raised more than $2 million to donate to the Bozeman medical system and community groups.

Ossorio, a 63-year-old real estate agent, said he regretted the health crisis and shutdowns, but added that residents were enjoying the slower pace of life with fewer visitors.

“It’s so huge out here, the land. You can go Nordic skiing; you can ride your bikes,” he said. “It’s frankly difficult to run into anybody. Maybe at the post office you’ll see people, or if you go to buy groceries or takeout, but otherwise it’s just you.”

Back in Sedona, Scott MacDonald, an investment manager who lives in Denver, had arrived earlier this month after loading up his Tesla Model X and making the 12-hour drive south with his wife and two children.

The construction around their downtown Denver loft was deafening, MacDonald said, and the lack of social distancing perturbed him. The family decided to head to Sedona, where they rented a home on a ledge overlooking the city for $8,000 a month.

“We love it here,” MacDonald said on a recent morning after a mountain bike ride. “The quiet, the space, the scenery — it’s all just amazing.”

He said he and his family were taking social distancing seriously and hoped the U.S. doesn’t try to rush back to a sense of normalcy. It’s too risky, MacDonald said. They stay inside, cook and sometimes order takeout and delivery from some of Dahl’s restaurants.

On a recent afternoon, Dahl and her chief operating officer, Jay Schimmel, sat on the patio at Mariposa. Leonardo napped in her lap and a container of lemon-scented Clorox wipes sat on a nearby table.

Dahl and Schimmel were preparing for a meeting among a coalition of Arizona restaurant owners about safe practices for when businesses can resume opening next month.

“We really cannot worry about what other restaurants do,” Schimmel said.

“We have to be safe,” she said, “make sure everyone in our restaurants are protected.”

A hush fell over the patio. It lingered until the hum of a small chartered jet flying low on a final approach to the airport broke the silence. Dahl hopped up and started making calls.