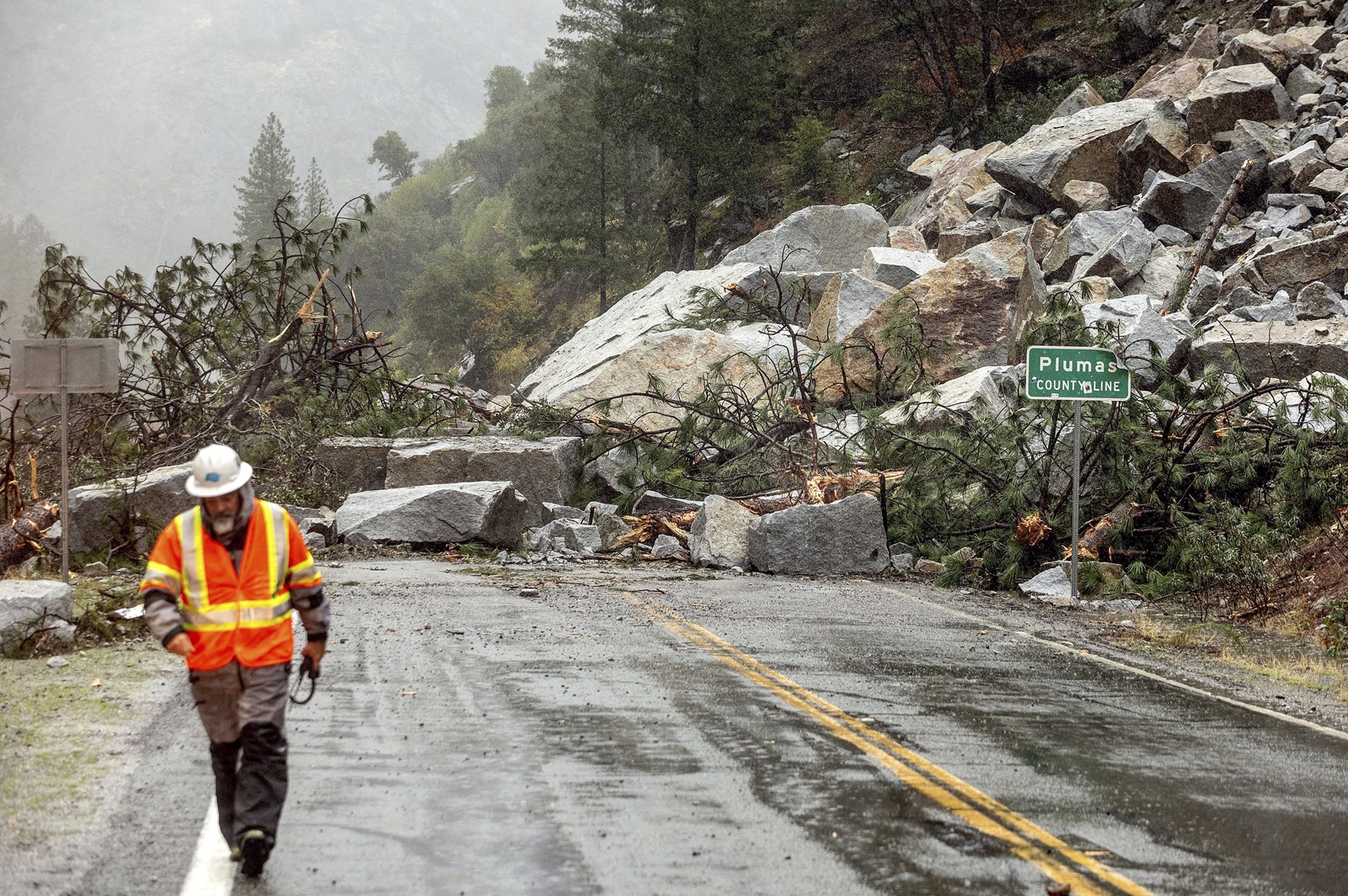 HIGHWAY 70 in Plumas County was shut down by multiple debris flows between Jarbo Gap and Greenville, a community that was devastated by the Dixie fire. Officials warned those living in burn scar areas to evacuate. (Noah Berger Associated Press)
PREVIOUS IMAGE

Bomb cyclone. Rivers of rain. Emergency response officials were bracing all of last week for the worst days of the storm — and it finally arrived late Saturday evening. Light scattered showers in Northern California, already burned out by a summer of fire, morphed into an increasingly heavy downpour overnight.

By Sunday morning, the torrential rainfall had shut down at least one crucial highway as mud, rocks and unshackled debris flushed down denuded hillsides. Flash flood and excessive rain warnings blared across road signs and phone screens, with some officials declaring that for those in the Dixie fire burn area who had not yet evacuated, it could be too late.

“If you are near a burn scar, it may be too late to evacuate,” officials at the National Weather Service in Sacramento said on Twitter, along with a list of safety warnings. “Do not attempt to cross a debris flow. Take shelter in the highest floor of your home.”

By 7:30 a.m. Sunday, multiple debris flows had shut down Highway 70 between Jarbo Gap and Greenville, a historic mountainside community in Plumas County that had already lost so much to the Dixie fire. A photo circulating on social media showed a dramatic slide near the community of Tobin, where a huge pile of rock, trees and debris collapsed onto both lanes of the highway.

Transportation and California Highway Patrol officers rushed all morning to collisions and reports of fallen trees and overturned vehicles. Numerous roadways are flooded, they noted, including portions of State Route 99. They urged drivers to avoid areas near creeks and drainages, which are particularly prone to flooding during intense rain.

Rain in the Dixie fire region was falling at 0.4 to 0.7 of an inch per hour — a rate expected to intensify through Sunday, said Katrina Hand, a weather service meteorologist in Sacramento.

“We’re looking at pretty heavy steady rain through the rest of today into the evening,” Hand said Sunday morning. “It will still be raining a decent amount into Monday, but it looks like the heaviest will make its way out by later tonight for that area.”

South of the Dixie burn area, along where the Caldor fire scorched the Highway 50 corridor, officials remained on high alert for life-threatening flash floods and debris flows. Heavier precipitation started moving in around midmorning and was expected to continue its march south. The rain here was expected to pour as much as an inch per hour throughout Sunday and into Monday.

Crews last week were busy building barriers along rivers and streams, constructing retaining walls and fencing off unstable hillsides that could collapse. Deep-water rescue vehicles have been positioned in high-risk areas, according to the state’s Office of Emergency Services, and crews have been deployed to monitor key burn areas.

Flash flood warnings for both the Dixie and Caldor regions were in effect until 3 a.m. Monday. More than a foot of rain could fall in the Sierra Nevada, with up to 3 feet of snow possible at higher elevations through Tuesday, forecasters said.

Residents in the San Francisco Bay Area also reported intense flooding and fierce winds as the storm made its way down the state. In Marin County, all roads in downtown San Rafael had to shut down Sunday afternoon due to flooding. Motorists who braved the rain gawked at a large truck that had flipped over on the Richmond-San Rafael Bridge.

In San Francisco, Marina Boulevard between Laguna and Baker streets was closed Sunday afternoon while emergency crews responded to pooling water. The entrance to Golden Gate Park at 25th Avenue was also closed due to flooding and a downed tree.

In counties such as Sacramento and Fresno, first responders prepared shelters amid evacuation warnings. All told, the National Weather Service has issued a flash flood watch for the scars of 13 fires that burned since 2018.

Rain was expected to reach Southern California by Monday — peaking in Los Angeles around midday with as much as half an inch to an inch of rain in downtown and higher amounts over the mountains to the north and east of the city.

A debris flow, often referred to as a mudslide, is a torrent of mud, rocks and tree branches. These rumbling, sudden movements of land and water can overwhelm homes and crush any vehicles in their path.

Areas recently burned by wildfires are particularly susceptible during intense rain. Vegetation on a healthy hillside typically anchors the soil even when it rains. But when a fire consumes this vegetation, the slopes — now stripped of this natural protection — become vulnerable to erosion and fast-moving flows of water.

Wildfires also make it harder for water to infiltrate the top layer of soil: Ash and other particles tend to clog the soil, and oily substances can affect the ground’s ability to absorb water. As a result, the soils become repellent to rain. (Imagine the water hitting the surface like rain rushing down a slippery playground slide.)

Burn areas are generally more prone to debris flows for three to five years after a fire — the amount of time usually needed for vegetation to grow back. But with increasingly dramatic swings between severe fires and intense precipitation, with essentially no transition period in between, the risks continue to compound for California.

Scientists have long warned that this whiplash would become more common as the consequences of a warming planet continue to intensify.

Although this latest bout of rain is not enough to end California’s record-breaking drought, the precipitation has been a welcome relief to those fighting another extreme fire season: The Dixie fire, burning at almost 1 million acres, is now 97% contained, and Jeff Knudson, the incident commander for the Caldor fire, announced Sunday that his team is handing command back to local fire officials.

The Caldor fire, now 100% contained, had threatened the Lake Tahoe Basin and Eldorado National Forest for two months. Firefighters carved a total of more than 400 miles of containment line across the landscape, and authorities said repair operations will continue for quite some time.

“The communities along the west slope of the Sierra have been gracious hosts, and we wish them nothing but the best as they and the land continue to heal from the Caldor fire,” Knudson said.

The blaze will continue to creep and smolder within the containment area long into the winter, Knudson said. Other dangers in the fire area include falling trees and debris, heavy fuels that continue to burn, and hazardous materials from scorched structures.