In Hawaii, a battle for the heavens

Native elders and allies protest plans for a huge telescope atop Mauna Kea. 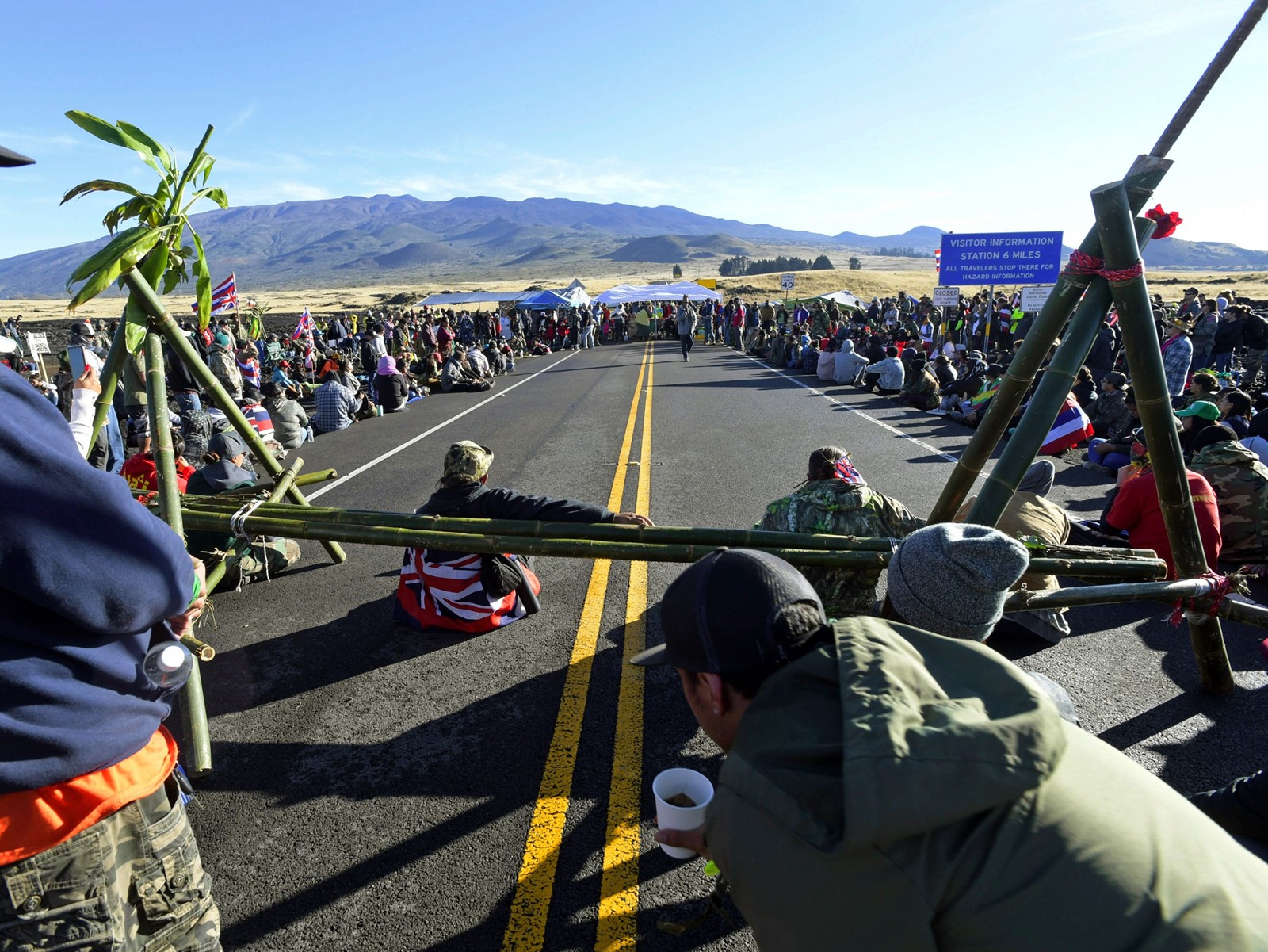 For astronomers, the clear, dry air of Mauna Kea, the tallest peak in Hawaii, provides the best place in the Northern Hemisphere, and perhaps on Earth, for observing the heavens. It is here, at nearly 14,000 feet, that a consortium led by Caltech and the University of California wants to place a massive telescope, 18 stories tall, that would serve as a celestial time machine.

The Thirty Meter Telescope, as it is known, would give astronomers the ability to “peer through space-time to the beginning of the universe 13 billion years ago, all the way back to nearly the hot big bang,” according to UC Santa Cruz astrophysicist and Thirty Meter Telescope board member Michael Bolte.

Native Hawaiians agree that Mauna Kea connects humanity to the universe — as an umbilical cord between Earth and space. The peak at Mauna Kea is the “highest point where land touches the sky — where the two deities, Sky Father and Earth Mother, meet,” said Noe Noe Wong-Wilson, 67, a retired cultural studies professor and elder in the fight against the telescope. To Native Hawaiians, putting a giant telescope on their sacred mountain is a desecration.

Through years of legal battles and protests, Native Hawaiians and their supporters pledged to stop the telescope project at all cost. On July 15, five days after Gov. David Ige announced that construction on Mauna Kea was imminent, opponents mobilized. They occupied the Mauna Kea Access Road, blocking equipment trucks from ascending to the summit and drawing massive support via social media. Celebrities, including Duane “The Rock” Johnson, Jason (“Aquaman”) Momoa and presidential candidate Tulsi Gabbard, a Hawaii congresswoman, showed up at the mountain. Presidential candidate Elizabeth Warren tweeted her support. Large protests sprung up across the archipelago.

At times the presence at the base of Mauna Kea reached 2,000 people — in essence, a small city, with medic and donations tents, a large kitchen, a volunteer “university,” and prayer ceremonies three times a day.

On July 17, state police arrested 38 Native Hawaiian elders (), including Wong-Wilson, for blocking the road. They were quickly released and have returned to their folding chairs on the highway, prepared for a long stay.

For astronomers, the protests are distressing. “I’ve been working with the community in Hawaii for 15 years,” said Bolte, learning “what would make us better community members.”

Through consultation, he said, telescope officials agreed to place the scope lower on the mountain, invisible from the summit and from 84% of Hawaii’s Big Island. The Thirty Meter Telescope consortium established K-12 grant programs, college internships and plans for some 140 jobs, all in the hopes of using the thin atmosphere of Mauna Kea to peer through space and time, and “search for evidence of life in our galaxy.”

“I think this is the biggest jump since we went from the naked eye to the telescope,” Bolte added. “This is another Galileo moment.”

Thirteen much smaller telescopes, many built without Native Hawaiian input, already stand on Mauna Kea. Opponents argue that they are not anti-science, but that they don’t want a telescope with the footprint of a Costco on their sacred mountain.

“That is a challenge for most Western people to understand, because we don’t have buildings and churches,” said Wong-Wilson. As she spoke, younger Hawaiians began spreading straw mats on the pavement for the evening prayer. “We have a belief system that is based in nature and our environment.”

“It’s a connection between terra and the heavens — the gods,” added Ku Ching, 83, who holds degrees in chemistry and law and for decades has made pilgrimages from the Pacific Ocean to the summit at Mauna Kea. Ching scoffs at the argument that since there are already telescopes on Mauna Kea, one more, albeit a much bigger one, won’t hurt. “That’s akin to having a woman raped again and again, because subsequent rapes don’t count,” he said.

Like the protests at Standing Rock over the Dakota Access Pipeline, the battle over Mauna Kea is part of a larger struggle over indigenous rights and the legacy of colonialism. Astronomers feel caught in the middle.

Recent polls show a majority of Hawaiians favor the telescope project. Yet astronomers say they are caught up in a larger political issue of Hawaiian sovereignty and past injustices, astronomers Ed Stone and Christophe Dumas wrote in an Aug. 9 statement. “We think it’s fair to say that what is happening today in Hawaii isn’t just about the construction” of the Thirty Meter Telescope.”

Polls also show Hawaiians disapprove of Ige’s initial handling of the crisis in July. After the protesters occupied the highway, the governor issued an emergency proclamation and warned he would send in the National Guard. He suggested protesters were using drugs and alcohol and leaving rubbish on the mountain. This was contradicted by subsequent official visits, including by Lt. Gov. Josh Green, who expressed “enormous respect” for “the protectors.”

On a recent visit to the protest site at elevation 6,500 feet, it was hard to find a single piece of litter. Neat lines of portable toilets are pumped out daily, according to organizers. Gray water is stored in large containers and hauled away. A pig farmer picks up green waste from the fully stocked kitchen, for slop. Donated clothes and sleeping bags are folded and rolled up in shelves, sorted according to size. Drinking, smoking, even swearing are expressly forbidden. At the heart of the resistance to the telescope is the concept of “,” a Native Hawaiian philosophy grounded in compassion, respect, self-discipline and nonviolence.

Nowhere was that philosophy more in evidence than on July 17, when state police began arresting the . The elders had decided to put themselves on the front line, to protect the younger leaders from arrest.

“When that day came, the elders said that we would be the first to go, we would sacrifice ourselves, but that others would have to remain on the side in silence,” Wong-Wilson said. As younger protesters wept, police — many Native Hawaiians themselves — approached the elders, some in wheelchairs or walkers. Some greeted the by performing — touching foreheads and noses, exchanging breath — before gently placing handcuffs on them.

“They were very kind,” Wong-Wilson said. “I understood that some of them were arresting their own family. And there was not an ugly word spoken. Not a hateful word spoken. We told them we loved them. We kissed them on the cheek.”

Days later, Ige came to the highway, smiling and embracing the elders. On July 30, he announced a two-year extension to a state deadline for starting telescope construction. Officials are considering an alternative site on Spain’s Canary Islands. “Our mountains are not sacred,” said Rafael Rebolo, director of the Canary Islands Astrophysics Institute.