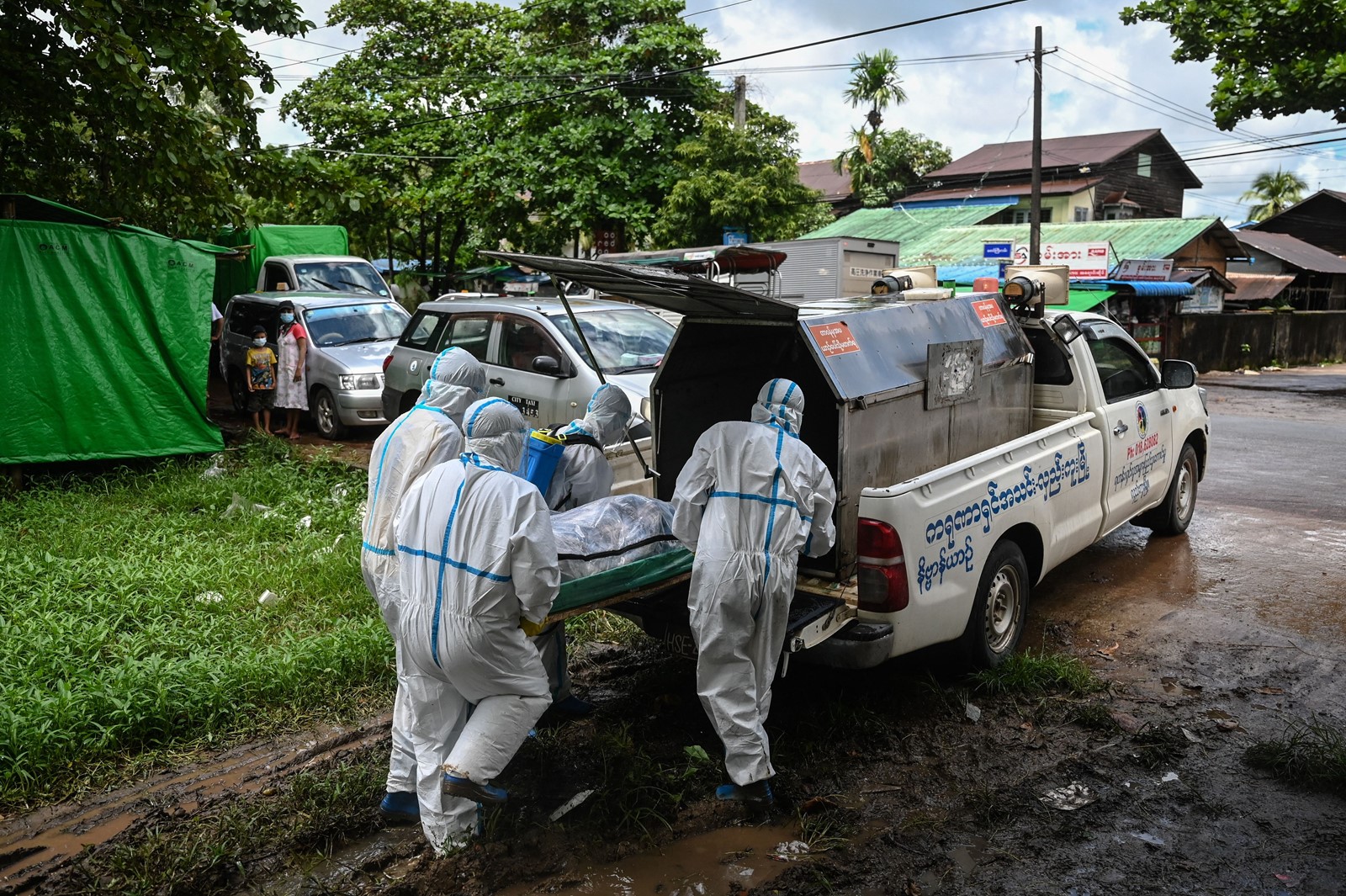 VOLUNTEERS in Yangon take away the body of a COVID-19 victim. Cemetery workers in Myanmar are struggling to keep pace with the demand for cremations. (Ye Aung Thu Getty Images)
PREVIOUS IMAGE

The dead in Myanmar are piling up outside cemeteries, overwhelming workers struggling to keep pace with the demand for cremations.

Those stricken with COVID-19 in Yangon, the country’s largest city, have begun flying yellow and white flags outside their homes in a plea for volunteers to deliver medicine and food. Social media are awash with appeals for oxygen as more and more people suffocate from the advance of the virus.

Six months after Myanmar was plunged into chaos by a military coup, the Southeast Asian nation is confronting a massive outbreak of COVID-19 fueled by the emergence of the Delta variant. Less than 3% of Myanmar’s population is fully vaccinated, according to the Our World in Data project at the University of Oxford, whose latest numbers are from June.

Unlike other major coronavirus surges in Asia, such as in India, Indonesia and Malaysia, Myanmar’s health crisis has been made more perilous by the country’s political turmoil and a military leadership accused of exploiting the pandemic to subdue resistance and stifle street protests.

The junta has ordered oxygen manufacturers to not sell to the public amid a serious shortage and ignored calls to blunt the spread of the disease in prisons filled with political detainees. The military has also cracked down on community volunteer medical groups formed by anti-junta healthcare workers.

Last week, soldiers reportedly posed as COVID-19 patients to lure volunteers out of hiding in a township in Yangon. The soldiers subsequently raided the group’s office and arrested two doctors. Myanmar’s healthcare system, which was inadequate before the Feb. 1 coup, has all but collapsed with an estimated 80% of doctors, nurses and other medical workers on strike to protest the army’s takeover.

The military leadership has lashed out by arresting 67 medical professionals and issuing arrest warrants for 600 others for refusing to work, according to the Myanmar-based Assistance Assn. for Political Prisoners. At least seven medical workers are among the more than 930 people killed by the junta.

“You can’t attack a pandemic and healthcare professionals at the same time,” the independent United Nations human rights expert for Myanmar, Tom Andrews, said in a tweet Monday.

The true impact of the disease is unknown. Many people fear the government and avoid state-run hospitals, further complicating expanding vaccine distribution. Testing is scarce in the country of 54 million also known as Burma. Myanmar has fractured into central regions controlled by the military and borderlands controlled by ethnic rebels where fighting has grown more fierce in recent months.

The Health Ministry reported 4,630 new cases Friday but conducted only 12,035 tests — a positivity rate of 38%, one of the highest in the world. While the official death toll stands at more than 7,000, observers say the number is probably much higher given reports on social media and local news of crowded cemeteries and sickened neighbors.

“None of the numbers that we’re seeing right now in any of the [official] reports have any basis in reality,” said Jason Mills, deputy head of mission for Doctors Without Borders, who described the situation in Myanmar as an “uncontrolled community spread.”

To many, the nation feels as if it is in free fall, propelled by a deadly virus, a battered economy and unrelenting oppression. People here speak of bracing for a disaster worse than Cyclone Nargis, which killed 140,000 people in 2008. That crisis was also made worse by the military’s response, which included reluctance to accept international aid.

Military leaders say they’re trying to procure millions of vaccine doses from Russia and China. Concern is growing that Myanmar’s instability will allow the virus to run rampant, providing fertile ground for new variants that could spill across the border to China, India, Thailand or Bangladesh.

“If the COVID situation can’t be controlled in Myanmar, it will be very dangerous for other countries especially in Southeast Asia but also for the whole world,” said Dr. Troy Maung, founder of the Myanmar Doctors for Human Rights Network.

The health emergency is compounding the daily misery for citizens. The prices of eggs and other commodities are soaring because of panic buying, worsening hunger in a country that is one of the poorest and least developed in Asia.

The World Bank said Monday that it now expects Myanmar’s economy to shrink 18% this year, up from its prediction of 10% in March. About a million jobs could be lost and the number of people living in poverty could double by early next year compared with 2019 levels, the bank said.

After overthrowing a civilian government led by Aung San Suu Kyi and reversing a decade of democratic reforms, it launched a deadly crackdown to quell a nationwide protest movement, arresting more than 5,300 people.

The army, known as the Tatmadaw, has withstood diplomatic condemnation from the West by winning at least tacit support from China, Russia, Japan and other Southeast Asian nations.

With the military failing to control the spread of the virus, a parallel National Unity Government, made up of representatives from the overthrown civilian government and ethnic minority allies, announced the creation of its own COVID-19 task force.

But with no presence in the country’s main urban centers such as Yangon and Mandalay, the government in hiding can do little to sway public health.

Health advocates including Maung are urging organizations such as the International Committee of the Red Cross or the World Health Organization to work with doctors and local health organizations operating underground.

Myanmar’s overcrowded prisons, where thousands of the junta’s opponents are locked up in close quarters, are hotbeds of COVID-19. U Nyan Win, a senior member of Suu Kyi’s National League for Democracy party, recently died of the disease in Insein Prison, the nation’s largest detention center, located in Yangon.

The Assistance Assn. for Political Prisoners warned that COVID-19 was spreading in multiple prisons, confirming outbreaks in five facilities including Insein. It said a protest broke out in Insein on Friday, instigated by political prisoners who haven’t received adequate medical care.

Those detainees include American journalist Danny Fenster, who told his family he had a fever and chest congestion the last time they spoke, on July 8.

“Danny is unvaccinated and detained in a prison with unbearable living conditions,” said Bryan Fenster, Danny’s brother. “We’re terrified that if Danny’s condition declines, there’s no way he will be properly treated.”

Theint Sandi Soe, another political prisoner, is also believed to have contracted COVID-19 in detention; she’s serving a three-year sentence for incitement, a catchall charge used to target the military’s opponents. The law student, 20, was rounded up along with her mother and 4-year-old sister during a June raid by soldiers on her home in Mogok in central Myanmar.

The military had been after her father, Soe Htay, a schoolteacher who organized months of demonstrations and has since gone into hiding. He said the charges against his daughter were spurious.

“They arrested my family as hostages in order to get me,” said Soe Htay, whose younger daughter spent five days in jail before being released.

Soe Htay said a contact linked to the jail has told him that Theint Sandi Soe’s health has been deteriorating and that she wasn’t receiving proper medical attention. He said he anticipated his family’s arrest and was prepared to turn himself in, but his wife wouldn’t allow it.

“I told her to hide, but she said she didn’t commit any crimes,” said Soe Htay. “She said it was they who committed crimes.”