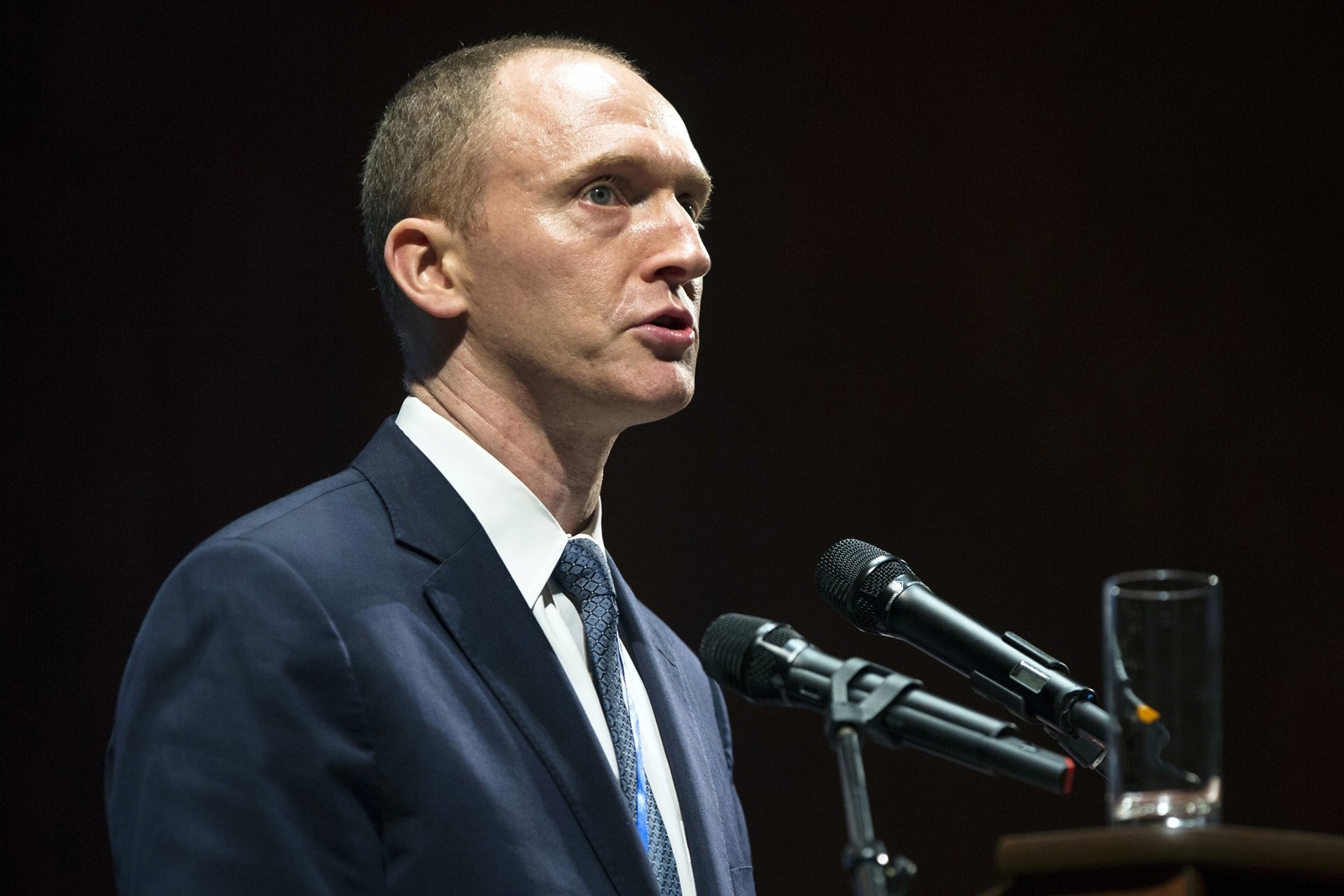 CARTER PAGE, shown speaking in Moscow in 2016, was a foreign policy advisor for candidate Donald Trump. He was suspected of being a Russian agent. (Pavel Golovkin Associated Press)
PREVIOUS IMAGE

As someone who was swept into the White House on a tide of grievances — voters’ and his own — President Trump labors to keep alive any perceived slight. He routinely assails “Crooked Hillary” Clinton despite defeating her nearly two years ago, blasts professional football players for kneeling during the national anthem months after the season ended, and constantly complains about other countries taking advantage of the United States even when facts argue otherwise.

The controversy over the FBI’s secret surveillance of former campaign advisor Carter Page has proved to be no different: Stoking it gives the president a tool to contend he’s been persecuted by the ongoing Russia investigation. Yet, his claims to the contrary, new documents released by his administration over the weekend still don’t bear out Trump’s assertions about illegal spying.

The issue returned to the spotlight Saturday evening when the Justice Department published a heavily redacted version of the pre-election application to eavesdrop on Page, a foreign policy advisor who was suspected of being a Russian agent.

The department also released three renewal applications, which also were submitted to a special federal court that approves surveillance warrants. All four submissions were approved by Republican-appointed federal judges, most recently in June 2017.

The publication of the documents, paperwork that’s required of the government under the four-decades-old Foreign Intelligence Surveillance Act, was extremely unusual, even in censored form.

Such materials are considered some of the government’s most closely held secrets, often describing clandestine sources and methods.

But conservative activists and media organizations had sued for their release, with the first group hoping to vindicate Trump’s claims that his campaign was improperly spied on and the latter seeking a clearer picture of a hotly debated episode.

Trump tweeted a mix of untrue and unsubstantiated assertions about the documents Monday, saying the original warrant application “was knowingly & falsely submitted” by the FBI and it “was responsible for starting the totally conflicted and discredited” special counsel investigation into Russia’s election interference and his campaign’s possible complicity.

The redactions in the released documents make it impossible to settle the debate once and for all — if such an outcome is even possible in today’s polarized politics — but some information can be gleaned from the documents.

Little of it supports the already shaky foundation laid by Trump and his allies.

Republicans led by Rep. Devin Nunes (R-Tulare), chairman of the House Intelligence Committee, have insisted that the warrant was improperly obtained because the application relied on Democrats’ opposition research collected by Christopher Steele, a former British spy, on behalf of Clinton’s campaign.

They also have accused the Justice Department of failing to disclose to judges that Steele was paid by Democrats. The allegations were laid out in a four-page memo released by House Republicans this year.

The documents released over the weekend confirm that some of Steele’s research was used to justify the application for a warrant, but it was far from the only piece of information included. Other material included suggestions that Page had previously been targeted for recruitment by Russian spies, and details on his various business dealings in Moscow.

Also, the documents do make clear that Steele, who is not named, was doing political work. Steele — identified as “Source #1” in the application — is described as someone hired to find “information that could be used to discredit Candidate #1’s campaign,” a reference to Trump.

The Democrats who hired him aren’t named either, but neither are Republicans or Trump identified by name, a common practice in such documents.

Even as Trump and his allies claimed vindication from the documents, legal experts said they showed the exact opposite.

“The released applications further reinforce the misleading qualities of the Nunes memo, including its central claim that the FBI did not reveal to the FISA court that Christopher Steele was working for political opponents of then-candidate Trump,” said David Kris, a former assistant attorney general for national security.

“Notwithstanding Source #1’s reason for conducting the research into Candidate #1’s ties to Russia, based on Source #1’s previous reporting history with the FBI, whereby Source #1 provided reliable information to the FBI, the FBI believes Source #1’s reporting herein to be credible,” the application said.

In other words, despite Steele’s anti-Trump assignment, his record of reliability for the FBI made him credible in this case, authorities argued.

It’s unclear what, if anything, the Justice Department learned by eavesdropping on Page. He has not been charged with any crimes, and prosecutors have not cited him in other cases brought by special counsel Robert S. Mueller III, who is leading the investigation.

However, the applications to renew the warrant grew in length each time, a suggestion that the case for eavesdropping grew over time. The new segments are redacted.