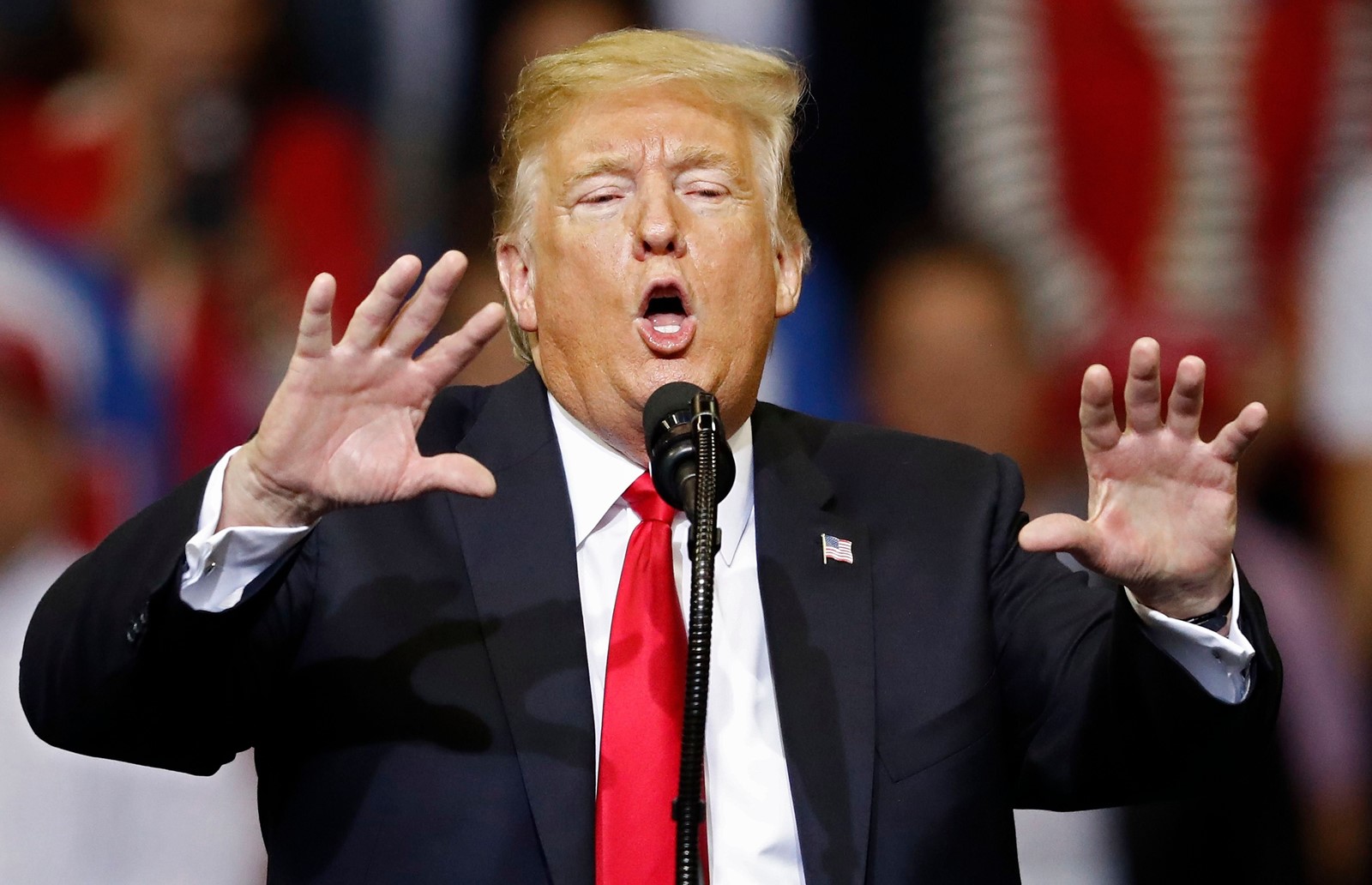 Literally everyone in Washington’s political world knew President Trump was making a false and implausible promise when he said he’d cut taxes for the middle class before next month’s midterm election — reporters, fact checkers, Congress’ Republican leaders, even his own staff.

Yet there was Trump on the White House lawn Monday, promising away as reporters confronted him. He mistakenly described the legislative process and dismissed the time-consuming realities of passing a complicated tax package in Congress, as well as the simple fact that lawmakers have left town until after the election. Even as his claims fell flat, he stood his ground.

“No, no. We’re putting in a resolution sometime in the next week, or week and a half, two weeks,” he said. He meant “bill,” not a nonbinding resolution, but by any name the measure would be meaningless with no one at the Capitol to vote on it.

Undaunted, that night at a rally in Texas, Trump told supporters the tax cuts would happen next week.

This is Trump at his most Trumpy, two weeks before an election. The salesman is out pitching promises, fear, riches — anything to make the sale, never mind if it’s true, and to get Republicans out to vote.

The caravan of migrants heading north toward the border includes terrorists organized by Democrats handing out money, Trump falsely claims, despite denials by national security officials. Californians, he insists, are rioting over local pro-immigration policies. And he describes Democrats as a “mob” intent on stripping away Americans’ healthcare coverage, tax cuts, 401(k)s, guns and their newfound national greatness.

Trump not only presents himself and his party as the safeguard against the Democratic dystopia he conjures, he also promises to lower drug prices, end opioid addiction and hand out additional tax cuts.

Aides say Trump is trying to shake satisfied Republican voters out of any complacency — as the president himself, aware of the historical pattern of midterm losses for a president’s party, put into his own unique parlance Monday night.

Marc Short, Trump’s former legislative director, suggested the president isn’t doing anything different, but rather the media are covering him through the prism of an election campaign. As for Trump “throwing everything at the wall,” Short said, “The president wants it that way. He wants us to be doing multiple things at one time.”

The president is also leaning into the nationalism that propelled his 2016 campaign, declaring for the first time in Texas that he’s proud of a controversial label that’s often associated with white supremacists: “You know what I am? I’m a nationalist. OK? I’m a nationalist.”

Bannon lauded Trump for his preelection campaign arguments: “He closes better than anybody. The reason we beat them in 2016 was that he closed strong. He understands in sports and politics, it’s about momentum and he’s clearly got the momentum.”

Trump associates note the sharp difference between 2016, when many Republican candidates wanted nothing to do with him, and this year, when many depend on him given his hold on party voters. That will give Trump, despite his occasional protests, even more ownership of the election results, for better or worse.

The president and his allies also see the threat in losing majority control of the House or Senate, allowing newly empowered Democrats to open investigations. The allies tend to dismiss the false statements he makes, or argue that his supporters see in them the truths Trump intends.

“The caravan is a great example of that,” Short said. “There’s a lot of questions about the accuracy of who’s embedded in the caravan. What most Americans are seeing in the caravan is the question of who is doing more to secure the border now.”

A former aide, who would not be identified to avoid alienating the president, said Trump just repeats threads of information he sees in conservative media, ignoring advisors who tell him they’re not true. Even in public, Trump laughs off his battles with independent fact checkers.

Pressed by reporters to explain his claim about riots in California, Trump on Monday insisted without specifics that there have been riots “in some cases.” On Tuesday, during a long exchange with reporters in the Oval Office, he again batted away a request for proof that the migrant caravan includes “Middle Easterners,” saying, “There’s no proof of anything.”

In Bannon’s view, fact checkers parsing the president’s words miss the point: “This is a base election. He’s not trying to make arguments to convince anybody about his policies. These are motivational speeches to get his base a sense of urgency.”

Trump’s indifference to facts, however, concerns many. “Most of what Mr. Trump says these days is literally made up,” Peter Wehner, a veteran of both Bush administrations, wrote in a tweet following Trump’s Houston rally. “He’s trying to construct a world of make believe and fairy tales, of myth and fiction, of illusion and hallucination. It’s a world increasingly detached from reality. The rest of us must refuse to live within the lie.”

While current and former Trump aides, like Bannon, egg the president on, other advisors contribute to his political narratives in more subtle ways, and with just enough truth to escape the fact checkers’ censure.

On Tuesday, Kevin Hassett, chairman of the Council of Economic Advisers, presented a report critical of socialism, using the typically academic White House office to amplify one of Trump’s favorite campaign talking points — that, under Democrats, the U.S. would turn to socialism and go the way of Venezuela.

Hours later, the White House held another conference call for reporters to emphasize statistics related to apprehensions of people crossing the border. One of the senior administration officials on the call, who would not allow their names to be used despite reporters’ objections, accused Democrats of wanting to abandon American sovereignty.

The officials dodged repeated questions asking for evidence of Trump’s assertion that terrorists are embedded in the migrant caravans. “The president has made his comments on it,” one said. “We’re not going to speak for him.”

Trump, one former campaign advisor said, is intent on motivating all Republican factions by his rhetoric: establishment conservatives, moderates and the more populist “Trump wing” of the party.

“Right now, they’re unified in their passion to turn out on election day, but for different reasons that Trump has given them. For some, it’s jobs and tax cuts and the judges. For others, it’s more ‘America first’ and a lot of the immigration rhetoric,” the advisor said.

Even as critics denounce his falsehoods, Trump is unflappable. As he left the White House for Texas, to campaign for Sen. Ted Cruz, a Republican rival during the 2016 campaign, reporters asked whether he regretted his false claim during their presidential primary contest that Cruz’s father was involved in the assassination of President Kennedy.

“I don’t regret anything honestly,” Trump said. “It all worked out very nicely.”