Every dog has his workday at Amazon’s global hub 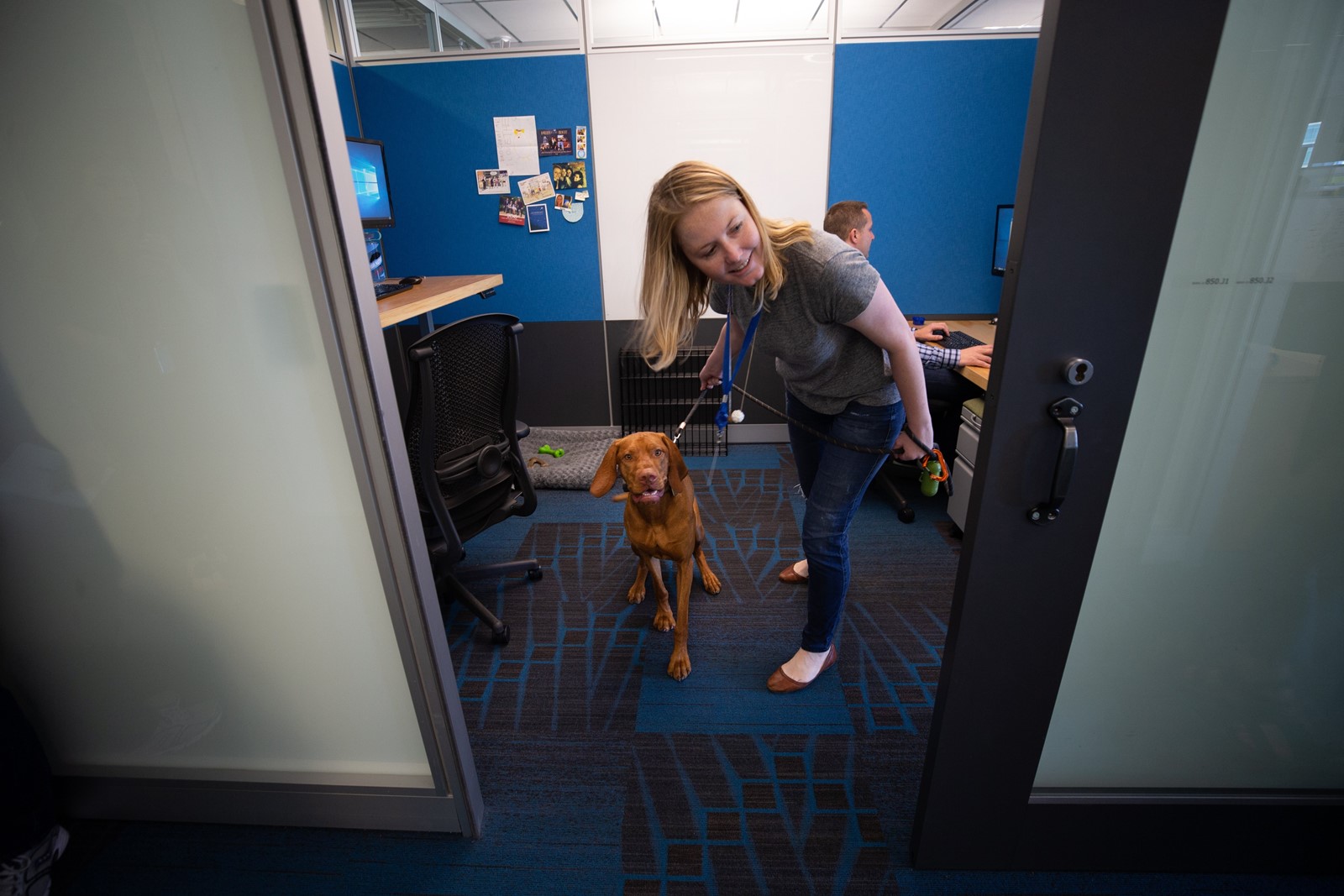 AGATA SKORA, manager of vendor management/toys at Amazon, and her dog, Manu, a 11/2-year-old Vizsla, peek around the corner of her Seattle office cubicle. (Karen Ducey For The Times)
PREVIOUS IMAGE

Casually dressed techies, blue badges flapping, dart past construction workers during morning rush hour at the global headquarters of Amazon, the juggernaut accelerating the growth of our on-demand culture.

A company food stand dispenses free bananas to commuters streaming between the sleek Amazon office towers that have invaded a light-industrial district on the shore of Seattle’s Lake Union. Gardeners in a glass and steel sphere step back to admire a rare corpse flower in bloom.

Through it all weave hundreds of dogs, whose presence may be the ultimate workplace perk — especially in Seattle, where canines outnumber kids. More than 7,000 dogs are registered to come to work at Amazon’s offices here, compared with 6,000 a year ago.

That amounts to a dog-person ratio of 1:7 at the mother ship, where about 49,000 people are employed. A host of dog-oriented enterprises, including doggy day-care and trendy pet-friendly bars and restaurants, contribute to the beehive of activity in the neighborhood where Facebook and other tech firms are also opening offices.

On a recent day in Amazon’s 12-storyApollo building, a Havanese named Cooper accepted a customarysnack from a receptionist at the lobby counter, his owner hurrying upstairs to teleconference with London. There was scarcely time to sniff Sparky, a Shih Tzu-Maltese trotting to an elevator, or Murphy, a goldendoodlerunning out on his person’s coffee break.

“Nobody knows me,” says Shefali Duhan, Cooper’s human companion and a sales team program manager, but “everybody” knows Cooper.

Duhan had jumped at the chance to get a pet to bring to work after she transferred from Amazon in Hyderabad, India, which doesn’t allow dogs. Now she wouldn’t think of leaving Cooper at home.

“You can’t focus at work if you know there’s someone at home you have to take care of,” she said.

Countless studies have extolled the benefits — for employees and companies — of having pets in the workplace. British researchers have even associated dogs in the office with reduced employee turnover, which is notoriously high at tech companies competing for talent. News reports have suggested Amazon has struggled with turnover, but a company spokeswoman declined to provide figures.

“The benefits of dog-friendly workplaces may manifest as lower rates of absenteeism and higher worker morale and productivity,” according to a 2017 paper in the International Journal of Environmental Research and Public Health.

As lines blur between work and home, and people and pets bond in new ways, companies nationwide are finding that dog-friendly perks are relatively cheap compared with health plans and other conventional benefits — and they’re a useful recruiting tool as well. NewerWest Coast businesses lead the pack among employers catering to canines, according to a recent national ranking of “best dog-friendly companies” by Rover, a pet services clearinghouse that is based — not incidentally — in Seattle. (Amazon was rated No. 1 by Rover — and in an annual “most pet-friendly companies” survey released by Wellness Natural Pet Food ahead of Take Your Dog to Work Day.)

On any given day, more than 800 of the 7,000-plus dogs registered at Amazon come to work at the company. Popular breeds include corgis, golden retrievers and any kind of doodle, pets that answer to names such as Kona, Luna and Winston.

Amazon dogscan stop to lunch on flank steak or New Zealand venison purchased by their ownersat a newly opened branch of Just Food for Dogs, an Irvine-based chain offering “human-grade” meals. They can eat cream-filled cannolis from Puddles Barkery. Some have their own Instagram accounts.

When their owners have meetings, dogs can pop into a doggy day-care spot for a shampoo, blow dry and “nail pawlish.” They can play on a 17th-floor deck in Amazon’s Doppler Building, created just for them and featuring ornamentalfire hydrants and artificial grass.

“I’m pretty sure Amazon dogs have the best life,” said Lauren Lee, an Amazon Home senior product manager, as she nudged Emmy, her black Lab, into an enclosure surrounding her desk. “She’s my favorite co-worker.”

Richard Winograd, a Prime Video software engineer, pedals to work with his cockapoo, Mighty, nestled in a basket. “He’s small enough that I can bring him and not change too much of my flow,” Winograd said.On breaks, he works on socializing the 7-month-old in a leash-free Amazon dog park next to the company’s Spheres, giant humidified orbs that contain more than 40,000 cloud-forest plants.

Not everyone is jazzed about the company policy. Skeptics include Amazonians with allergies and those who prefer cats, such as Henry Berg, a former Amazon principal technical program manager who left the company this month after four years.

“For people who are really into dogs, it’s great, but for many of us it is a quirky aspect of the company,” Berg said. “Sometimes you are trying to find somebody and you find yourself having to climb over dog fences and navigate past multiple dogs, which was often hilarious in an otherwise serious place.”

“We do our best to help them navigate,” she said. “The dogs that seem the happiest are the dogs that are not treated like humans.”

Urban Animal vets see relatively few dogs with serious bite wounds, which surprises Trusheim given the concentration of pets in Amazon pods, hallways and elevators. “I’m amazed out how well it seems to go,” she said.

Perhaps that’s because Amazon managers apply the same relentless focus to dog logistics that they bring to disrupting markets. There’s a “Woof Pack” team, run by Lara Hirschfield and Stacey Martinez, which oversees canine affairs. The work they do for dogs is part of their duties as senior program managers for global real estate and facilities, but the other team member works full time, managing registration, events and social media.

Lobby counters feature shiny metal buckets brimming with dog treats, scarfed down at the rate of 20 pounds a week in the entryway of the 37-story Day 1 Building. Receptionists are quick to intervene when unsuspecting visitors help themselves, mistaking the treats for human snacks.

And how much does this abundance cost the company each year? Amazon is notoriously stingy with company information, and a spokeswoman declined to furnish a full accounting of company-provided dog services and costs. (But she did release another large figure, 7 million — the number of bananas the company has given out since 2015.)

There are, of course, a few rules for the canine-friendly workplace: Amazon policy requires employees who want to bring their dogs to work to get their managers’ approval, which could be revoked in cases of bad behavior. The company requires vaccinations and licenses to be current. Dogs must be house-trained. An employee may bring as many as two dogs to work at a time — and there is no registration fee.

When the inevitable accident occurs involving poop, an employee can simply fill out an online ticket or email janitors known as “remedy gurus.” (Amazon follows city policy for pet waste, disposing of it in plastic bags placed in trash containers to avoid contaminating lakes, streams and bays.)

“We have more coffee spills than we do dog accidents, which is the perfect Seattle metric,” Hirschfield said.

It’s not as though all of Seattle is being overrun by corporate dogs. The International Journal paper noted that U.S. workers generally don’t have a legal argument for bringing a dog to work, except in cases of accommodation for disabilities. Even service dogs may be denied entry by some employers, for example semiconductor manufacturers operating dust-free clean rooms.

For Boeing, another large Seattle-area employer, dogs and aircraft manufacturing don’t mix; the company permits service dogs “when appropriate.” Microsoft, based near Seattle, has a similar policy.

Expedia’s decision to exclude dogs from its soon-to-open headquarters on Seattle’s waterfront poses challenges for employees with pets, particularly those who live near the current campus in the nearby city of Bellevue. A six-lane street separates the new campus from a 12,000-square-foot doggy day-care branch that Downtown Dog Lounge is opening to hold 150 canines.

The day-care company is prepared not only to shuttle dogs across the busy street, but to add a bus to its fleet of vans to transport pooches between Bellevue and Seattle during rush hours. Elise Vincentini, Downtown Dog Lounge’s chief executive, said Expedia had requested the extra service to do whatever possible — short of letting dogs into the workplace — to retain workers considering leaving because of the move.

The situation shows how Expedia and other companies are struggling to appeal to workers who have dogs instead of kids, Vincentini said.

“If that’s the demographic that’s working for them, they have to find ways to handle that,” she said.

Downtown Dog Lounge already has two branches, each of which takes in about 150 canines daily. National competitor Dogtopia is opening 14 locations in Seattle.

New doggy day-care entrants may have to stretch to compete with established Seattle companies that have cut their teeth on Amazon dogs.

“We’re glad we did,” Vincentini said, “because this is where the dogs are.”