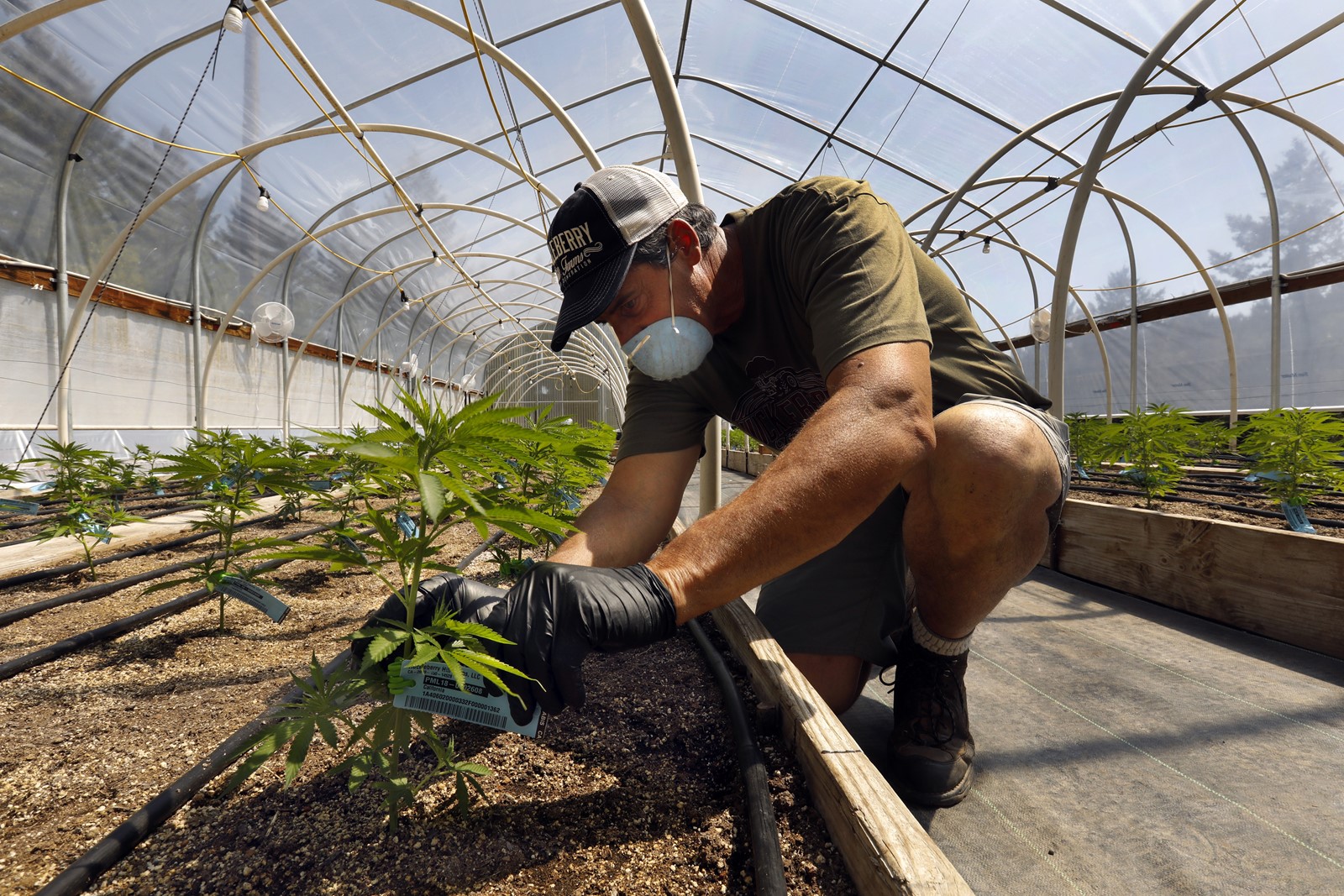 If there’s one business the coronavirus has kissed with fortune, it’s weed.

“Business is up, oh, about one hundred percent,” said Ryan Moran, operations manager for the Flower Co., a marijuana distributor in Arcata — a small college town on Humboldt Bay, just north of Eureka.

Moran, who hails from New Jersey, said his company provides next-day delivery for communities in the San Francisco Bay Area, and as of Friday, he expected to start next-day service for Los Angeles too.

The Flower Co.’s offices are in a small, newly constructed office park, where all the tenants work in the weed business, Moran said. A constant stream of small Toyota pickup trucks and Subarus filtered in and out of the parking lot Wednesday morning. A late-model BMW idled outside the adjacent building’s entrance.

Moran said his business really started to pick up March 16, after seven Bay Area counties announced a shelter-in-place order. “We saw a surge in panic buying,” he said, which dipped soon after, apparently because people thought that weed shops would be closed.

But then on March 22, Gov. Gavin Newsom declared cannabis and scores of other enterprises to be essential businesses.

After that, sales ratcheted back up, Moran said. They are now higher than they were after the initial surge.

He also conceded that job-loss anxiety and people feeling unsettled could be contributing to the demand.

Like other essential businesses operating during this period, Moran has set up new safety protocols for his employees, which include wearing masks, gloves and spacing themselves adequately from one another. Many of those precautions are practiced anyway, he said, given California and Humboldt County’s strict regulations and oversight of the the cannabis industry.

He has had to temporarily outsource his production arm, however, because many of his employees have opted not to come in, fearing contracting the virus.

“A lot of them had underlying health issues,” he said.

Eight of the roughly 20 workers he usually employs have been moved to “pick and pack,” where they get the product ready for shipping.

The same holds for John Casali, owner of a small, craft pot farm in Garberville — 82 miles south of Arcata. Casali has been in the business since the 1970s, when he and his mother moved to the family’s current property — a small, family farm 20 miles west of 101, along a winding road that leads through gigantic, centuries-old redwood trees and hilly fields of sun-soaked grass.

It was his mother who started growing the crop, along with other fruits and vegetables such as lettuce, snow peas and tomatoes. And she inspired a love of farming in her young son. By the age of 15, he was growing his own plants.

“But that was during the Reagan years,” he said. “Remember? The war on drugs.”

Back then, Blackhawk helicopters were frequent sights overhead across all of the “Emerald Triangle” — Humboldt, Trinity and Mendocino counties, he said.

“You’d see the helicopters stop and hover in the air, ropes coming flying out the side, and men in black, with AR-17s, descend to the ground,” where they’d give chase to farmers, such as Casali. “They’d run you through the woods, to the edges of ravines. It was terrifying.”

In 1992, he said, 30 federal agents burst into his house, pushed him to his couch, and held a gun to his head. And after three years of frequent court appearances in San Francisco, he was sentenced to 10 years in federal prison for the cultivation of cannabis and conspiracy to grow.

As Casali told his story Thursday morning, he oscillated between tears and bewilderment as he toured his state-and-county-certified greenhouse, where he is growing roughly 2,000 young plants.

He said he is not in the business for the money. He wants to keep his operation small. He’s the only laborer on the farm and hopes he’s providing a product that can help people get through times like this.

Phillips, 60, said he has been self-medicating since he was injured in a car accident as a boy, and his mother gave him some weed to ease his pain. In 1972, he moved from Los Angeles to Red Bluff, where he rides around town in an electric wheelchair after suffering a second accident later in life.

“There ain’t no dispensaries in this town,” Phillips said, “This is one poor town.”

As for Casali, he’s not an avid user of his own product, he said, testing it only for quality — not for recreation.

“It makes me too relaxed. I’d never keep this farm going if I smoked it,” he said with a laugh.

Recently, Casali enjoyed a visit from two prison officials he got to know while serving time at the Lompoc Federal Correctional Institution. He said they stayed with him for three days, and both left with half a dozen plants to bring home.

“You just never know how things are going to turn out,” he said with a laugh. “Life is full of surprises.”