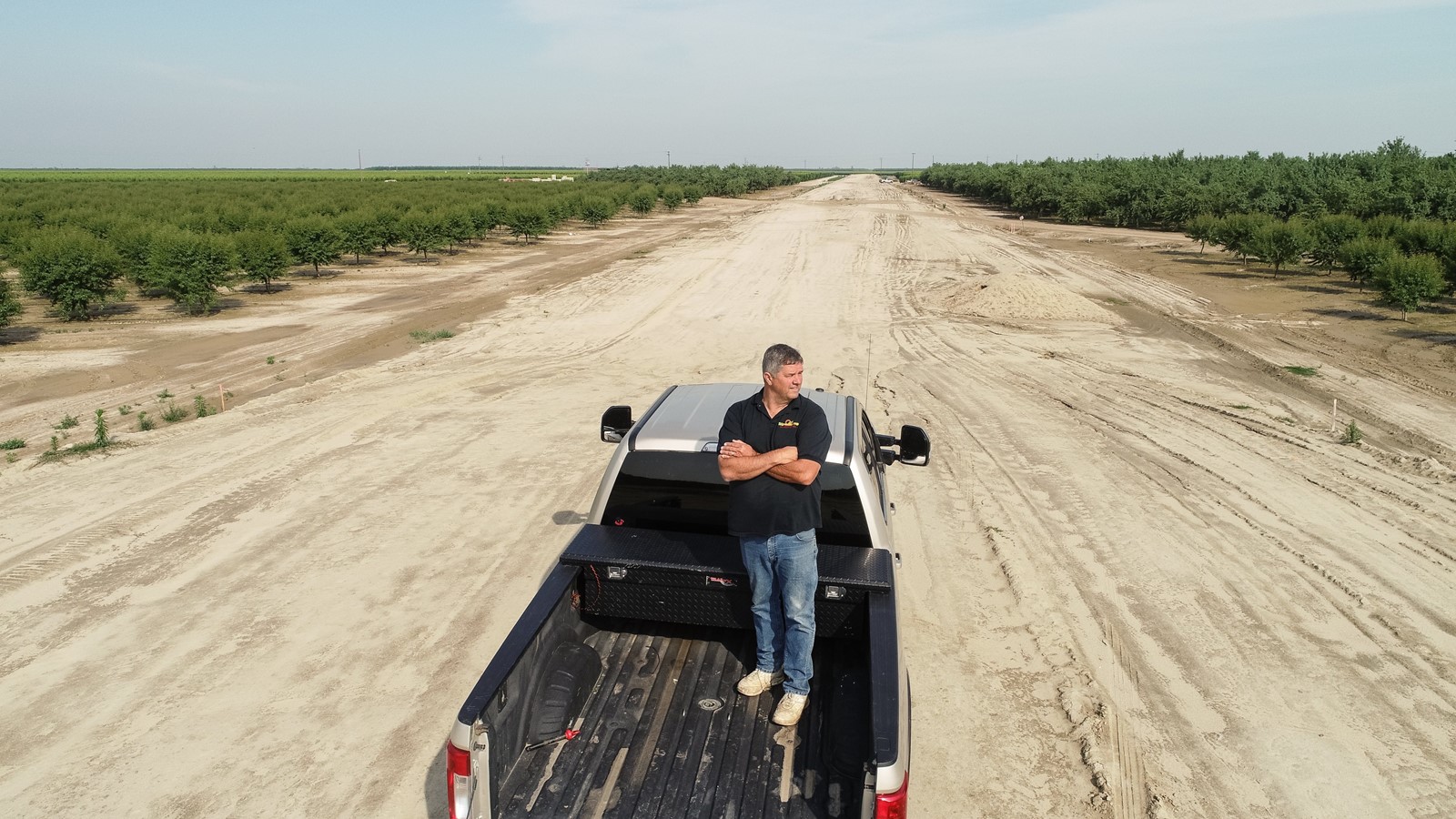 John Diepersloot squinted under a bright Central Valley sun, pointing to the damage on his fruit orchard that came with the California bullet train.

He lost 70 acres of prime land. Rail contractors left mounds of rubble along his neat rows. Irrigation hoses are askew. A sophisticated canopy system for a kiwi field, supported by massive steel cables, was torn down.

But what really irritates Diepersloot is the $250,000 that he paid out of his own pocket for relocating wells, removing trees, building a road and other expenses.

“I am out a quarter-million bucks on infrastructure, and they haven’t paid a dime for a year,” he said. “I don’t have that kind of money.”

Up and down the San Joaquin Valley, farmers have similar stories. The state can take land with a so-called order of possession by the Superior Court, while it haggles over the price.

But farmers often face out-of-pocket costs for lost production, road replacement, repositioning of irrigation systems and other expenses, which the state agrees to pay before the final settlement.

Those payments and even some payments for land have stretched out to three years. State officials have offered endless excuses for not paying, the farmers say.

Eminent domain,the legal process by which government takes private land,is complicated enough, particularly in California, with a maze of agencies involved. But the high-speed rail authority’s constantly changing plans, thin state staff and reliance on outside attorneys have made it more difficult, some say.

“They are bogged down,” said Mark Wasser, an eminent domain attorney in Sacramento who has represented more than 70 farmers and other businesses losing land to the rail project. “I would draw an analogy to Napoleon’s invasion of Russia.”

Many government highway and rail projects end up seizing private land for the greater good, leaving owners angry about the disruption to their lives and the loss of something they worked hard to build. In California, the slow payments are adding to the farmers’ frustration.

Tim Raven, a walnut and almond grower, told The Times he is owed $500,000. John Tos, a big grower who has waged a legal battle against the project, said the state owes him $150,000. Wasser said that Brenda Church, a former client, has been owed $1.9 million for three years. Ray Carter, who voluntarily sold his farmland, said he has been owed $630,000 for three years.

Carter’s brother-in-law, Vince Carter, also could not collect money for farm property that the California High-Speed Rail Authority took, which gave him a “lot of frustration,” Ray Carter said. “He died of a heart attack. I think it played a role in what happened.”

Asked about the allegations of nonpayment, the state rail authority issued a statement, though it did not explain why the problem exists.

“We understand the concerns of private property owners affected during the acquisition of their property … and construction of the high-speed rail system,” wrote Don Odell, the agency’s director of real property. He added that the authority tries to minimize the effects on farmers, cover their expenses and ensure they get fair-market value for land.

One problem was the agency’s decision to issue construction contracts with only 15% of the rail design completed, a so-called design-build approach. With only preliminary designs of highway bridges, rail structures and utility relocations, it was difficult to know how much land would be needed and the degree to which farms would be hit.

In fact, the rail authority has had to go back to landowners hundreds of times for additional land or to discuss unforeseen effects on farms. In Diepersloot’s case, the authority is building two perpendicular highway bridges to go over its rails along his property. That created a 70-acre triangle that is inaccessible. And it had to pay in perpetuity a walnut farmer next door to allow Diepersloot to use his private farm road for access.

“I don’t dislike trains,” he said. “I use them. But this one is a boondoggle.”

Some of these direct costs could have been avoided if the rail planners had paid closer attention a decade ago to what lay in the path of the planned rail route. A multimillion-dollar rendering plant is being rebuilt in Kings County. A possible redesign to avoid an oil terminal in Kern County could cause a $19-million delay. A cold packing house had to be relocated in Fresno. And other examples abound in just the first 119 miles of the route.

“They shouldn’t have run this through the breadbasket of the state,” Wasser said, echoing a sentiment of the rail system’s critics that the state should have aligned the route adjacent to Interstate 5 and not through the nation’s richest agricultural belt. California farmers grow more than half of the fresh peaches and almost all of the canned peaches that Americans eat.

The state relies on outside contractors to provide land agents, appraisers and surveyors, along with many other crucial functions necessary to buy farmland. The legal negotiations are handled by attorneys on loan from the California Department of Transportation, spread throughout the state. “It does not work well. There are interagency tensions,” Wasser said.

The rail authority’s unusual relationship with consultants is another issue. The agency appointed attorney Odell as director of real property in September. Odell reports to a consultant, Kristina Assouri of WSP, whose title is chief of real property. Assouri reports up the line to WSP’s Roy Hill, who is on suspension pending an ethics review. Hill reports to Chief Operating Officer Joe Hedges,a state employee.

Rail authority Chief Executive Brian Kelly said he has initiated a job-by-job review of such complicated lines of authority and hopes to streamline the organization, putting state employees in charge of key functions.

Neither O’Dell nor Assouri can sign a check. That function resides with the state controller after a payment goes through a tangled state bureaucracy.

Responding to an aggrieved businesswoman about a late payment this year, Assouri wrote an email that illustrates the cultural divide between Central Valley farm families and bureaucrats.

“Of paramount importance is the Authority’s commitment and responsibility for ensuring that funds expended under any state contract are in compliance with the requirements and provisions of the stated contract, which includes but is not limited to state and federal law and the Authority’s documented policies and procedures,” Assouri wrote.

Raven, the walnut and almond grower, is getting hit harder than many others. He had to replace wells, lost a 100-acre crop of table grapes and had other costs, totaling about $500,000, he said.

Ultimately, the ranch will have a 200-foot-wide scar. “They are going through five miles of our property at an angle,” Raven said. As a result, he and his crews will have to drive their tractors, sprayers and harvesting equipment up to five miles along county roads to get from one side of a field to the other.

“It is like cutting your house in half and having to go around the back to get to your kitchen,” Raven said.

Tos, the farmer who is waging a legal fight against the project, said that state agents during negotiations have shown a surprising lack of knowledge about agriculture. When the rail authority wanted a strip of his land for a temporary construction easement, an agent suggested that Tos transfer his mature walnut trees to pots for five years and then put them back in the ground.

“They don’t know what a walnut tree is,” Tos said.

The farmers feel their way of life is being upended. Diepersloot helped pioneer growing golden kiwi in the Central Valley, erecting a 20-acre canopy with a misting system that kept the fruit cool. About half of the ripe fruit was jetted overnight to Tokyo and other Asian cities, where he said it sold for top dollar.

But the rail authority needed part of the land for its rail route and was willing to pay him to re-engineer it. In January, he pulled down the canopy.

Diepersloot is a third-generation farmer. His three children attended top universities and then started their own Central Valley farms. He said the slow payments have forced him to tap his “crop note,” a bank loan that is used by almost every grower to cover operating costs.

“The bank knows what is going on and doesn’t like it,” he said.

“I have never done litigation. I am a farmer.”