Israel’s prime minister is fighting for political survival in Tuesday’s election. Polls show him near a deadlock. 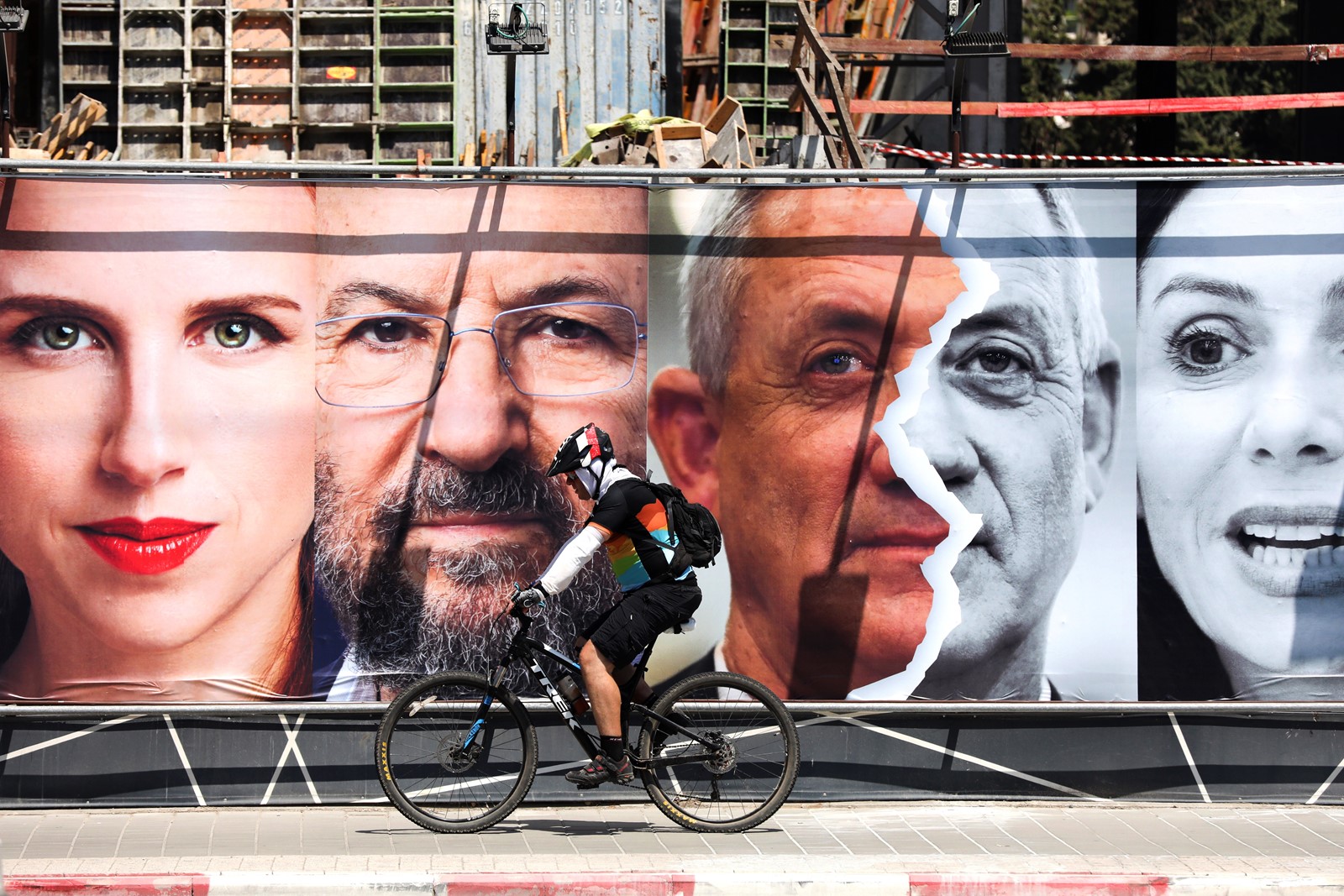 A BILLBOARD in Tel Aviv depicts Israeli politicians. Both Netanyahu and his opponents understand the election’s outcome could be decided by Arab Israelis. (Abir Sultan EPA/Shutterstock)
PREVIOUS IMAGE

In the final days before Israelis go to the polls, Prime Minister Benjamin Netanyahu has been turning up the heat of his rhetoric against Arabs.

“The Arabs want to annihilate us all — women, children and men,” said a message that went out to voters last week from his Facebook page and used a word for genocide usually reserved for the Holocaust.

“So I am asking you to be the prime minister’s envoy and bring three friends or family members next Tuesday and make sure they’re voting Likud” — Netanyahu’s party.

Both the prime minister and his opponents understand that the election Tuesday could be decided by Arab Israelis, who account for about 20% of the country’s citizens.

Netanyahu, who is fighting for his political survival as prosecutors prepare to indict him on corruption charges, has made Arabs a focal point of his campaign. His aim is to suppress their turnout while riling up his base.

The danger for the prime minister is that his attacks could backfire and motivate more Arabs to go to the polls. Benny Gantz, the former army chief of staff who leads Blue and White, the largest opposition party, has been courting the Arab vote.

In the last week, he gave an interview to Bokra.Net, a major Arab-language television network in Israel, and delivered a major policy address to members of the Arabic-speaking ethnic and religious minority known as the Druze.

Gantz has also campaigned heavily against the controversial “nation-state law.” The law, which passed last year, grants advantageous status to Jewish-only communities and downgrades Arabic from an official state language to one with an undefined “special status.”

Netanyahu championed the law to please the extreme right — the same target audience for his more recent anti-Arab rhetoric.

Tibi continued with a reference to the infamous Nazi Joseph Goebbels: “We understand which historic Minister of Propaganda is inspiring the Likud’s campaign.”

Afif Abu Much, a tech-executive-turned-political-activist, tweeted: “Netanyahu, you’re anti-semitic! What’s the difference between you and Neo-Nazis?”

He then offered Jewish opponents of Netanyahu the chance to make a political statement on their Twitter profiles by adding their names in Arabic.

For the next several hours, he responded to dozens of requests, writing Hebrew names out in Arabic letters.

“If any leader referred to Jews the way Netanyahu regularly speaks about Arabs, it would be an international scandal,” Abu Much said in an interview. “Can you imagine [French President] Emmanuel Macron saying ‘The Jews are out to get you?’ ”

He said that the prime minister routinely employed racism as a “sharp political tool.”

But the prime minister stayed on point. On Thursday, he tweeted: “A Left-Arab government has never been closer.”

He went on to accuse his opponents of cutting a deal with Tibi to make him a Cabinet minister should they win.

The tweet concluded: “Only a vote for the Likud will stop them next week!”

This is not the first election in which Netanyahu has tried to get votes by fanning the flames of anti-Arab sentiment.

Late on election day in 2015, after exit polls suggested his party might lose, he posted a warning about Arab voters being bused to polling places “in droves.”

Netanyahu was later forced to apologize and pay a fine, but the move may have played a part in helping him stave off defeat and keep his job.

The current election is a redo of the April vote, in which Netanyahu narrowly triumphed over Gantz but then failed to enlist enough allies to form a coalition government.

In that election, turnout among Arab voters fell to a historic low of about 49% — in large part due to efforts to intimidate them.

Likud inspectors, for example, brandished 1,200 cameras in polling places in Arab communities in an attempt to scare voters.

Last week, Netanyahu led an attempt to pass a law that would have legalized installing cameras in polling booths to fight what he called “widespread voter fraud” in Arab communities.

There is no evidence of such fraud, and the effort, which was opposed by all the institutional bodies supervising Israeli elections, was defeated.

It did, however, provide Israelis with an enduring image: Ayman Odeh — chairman of the Joint List, the largest majority-Arab party in Israel — holding his phone inches from Netanyahu’s face while the prime minister defended his bill.

“Arab voters are the central player in these elections,” Odeh said in a meeting with journalists. “Netanyahu understands this.”

“The truth is that if we vote at the rate of 65% this time, he will not remain prime minister. He knows this.”

In 1999, a 75% turnout of Arab voters played a major part in defeating Netanyahu to end his first term in office.

Late last month, Odeh said he would be willing to join a center-left coalition government as a full partner, a move that would make him the first leader of an Arab-majority party to join an Israeli Cabinet.

Both Odeh and Tibi have been targets of daily personal attacks by the prime minister in recent weeks, often including the accusation that they support terrorist groups.

Polls show a virtual deadlock between the Likud and the Blue and White.

Even if Netanyahu triumphs, his troubles will be far from over.

Two weeks after the vote, Israel’s attorney general is scheduled to lay out the evidence behind his decision to indict Netanyahu on three cases of corruption.

The prime minister stands accused of improperly accepting expensive gifts for political favors, ordering government action aimed at hurting one newspaper in exchange for favorable coverage from one of its competitors, and helping his friend get regulatory concessions for his telecommunications company.