Telling the world her Holocaust story 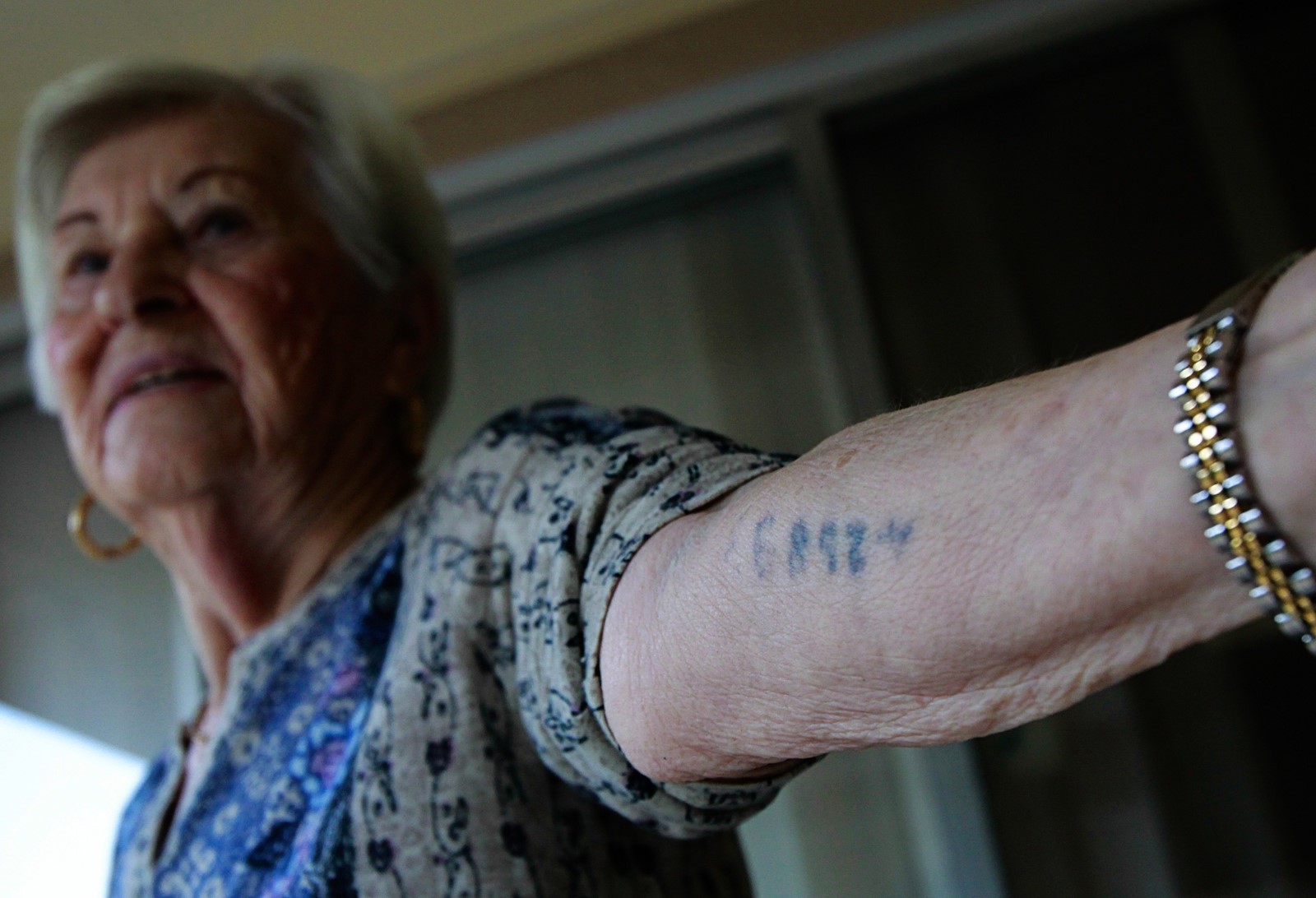 ROSE SCHINDLER, who survived the Holocaust, displays the tattoo she received in Auschwitz at her home last week in San Diego. She shares her first-person account of Nazi atrocities with anyone who asks to hear it — often at schools, churches or service clubs. (Photographs by Eduardo Contreras San Diego Union-Tribune) 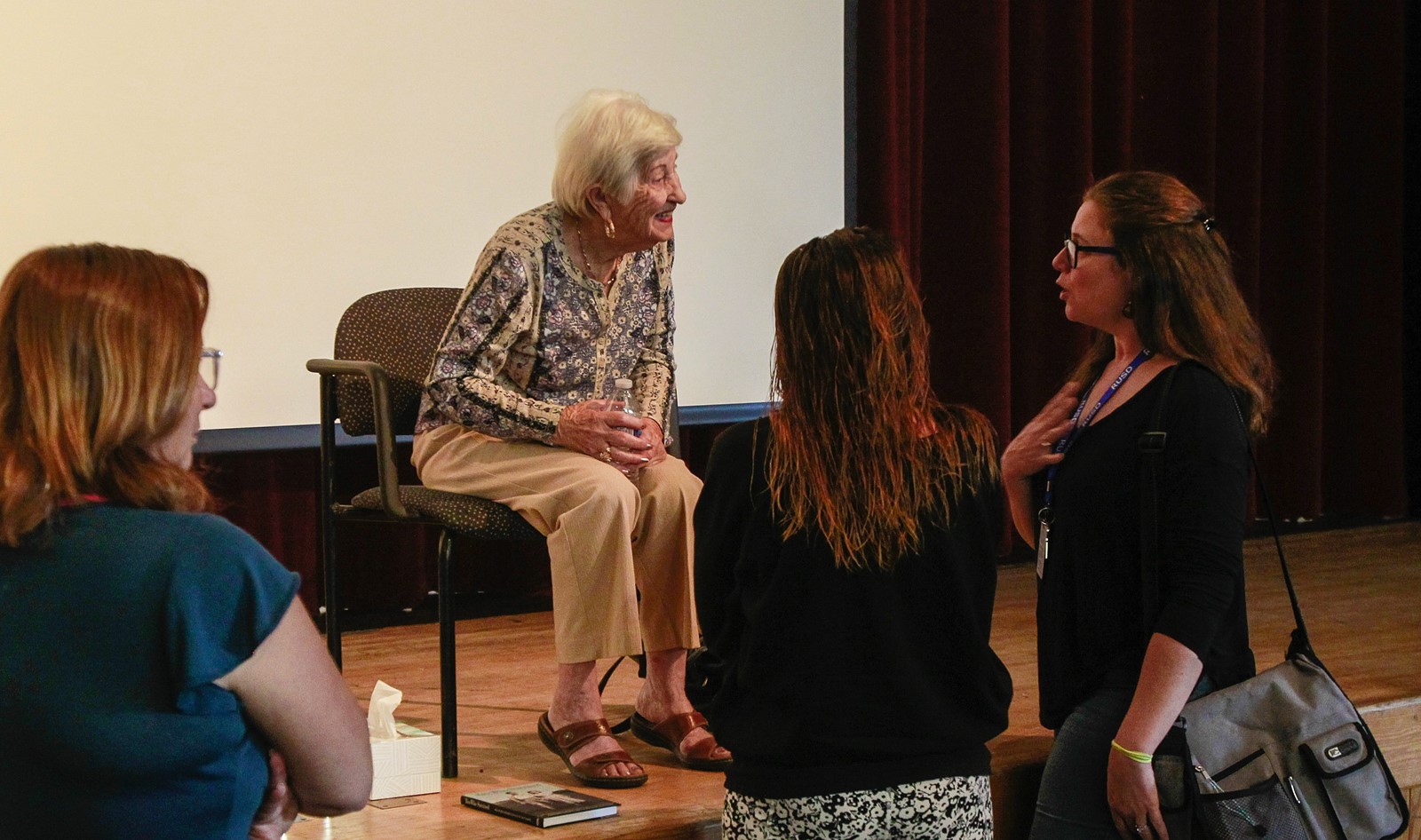 SCHINDLER speaks to audience members last week at Ramona High School in San Diego after her presentation, which was delivered without note cards. ()
PREVIOUS IMAGE

Hers is a horror that needs no introduction, not now. Not 75 years later. Everybody knows the Holocaust.

For four decades, she has been one of San Diego’s most dedicated memory-keepers, sharing her first-person account of Nazi atrocities with anyone who wants to hear it. Schools, churches, service clubs. For free. Nearly 90, she would seem to have earned the right to slow down. Or had that circumstance forced upon her by physical ailments.

Instead, she’s busier than ever.

Last week, she spoke at an event put on by the Navy, another at Ramona High School, and one at the University of San Diego’s law school. There are already a half-dozen talks scheduled for November. By the end of the year, she’ll have made close to 100 appearances.

At Ramona High, Schindler sat in a chair on the stage of the theater. A bottle of water was on the floor at her feet, near a box of tissues. But no tears came, not from her, anyway. Some of the students and teachers wiped at their eyes during her presentation, which was delivered without note cards. She doesn’t need help remembering the details.

Like how she arrived in April 1944 at Auschwitz, the notorious death camp, after riding for several days without food, water or toilets in a railroad cattle car stuffed with Jews. How the first person she met asked her age — she was 14 — and then offered this life-saving advice: “Tell them you are 18.” Children getting off the train were herded into a line that went straight to the gas chamber.

Or how, after the war, she was sent to a hostel in England for Holocaust orphans, where she met a teen named Max. He had a girlfriend, but she had a vision: “That’s the man I’m going to marry.” They were together almost 70 years and raised four children before he died in 2017.

As she spoke, Schindler reached up every so often to touch a gold pocket-watch chain she wore around her neck. It’s the first thing she puts on every morning after she wakes up. The chain belonged to her father, who hid it in their home before the family was ordered to leave, put it in a shoe-polish box that he tucked into the rafters and camouflaged with mud. She went back after the war and retrieved it.

One day at Auschwitz, the father she called Tata put his hands on her arms and bent down to look into her blue eyes. It was the last time she ever saw him. He said something that goes a long way toward explaining why her calendar is so full these days, so many years later.

“Stay alive,” he said, “so you can tell the world what they are doing to us.”

For a long time, Rose and Max Schindler didn’t talk much about the Holocaust, except with other survivors they met through the New Life Club. They joined after they moved to San Diego in the mid-1950s. Their children, each of them named for a relative who had perished in the genocide, grew up hearing just bits and pieces of the story.

Then, in 1972, one of their sons, Steve, was at Lewis Middle School. He was cast in a production of “The Diary of Anne Frank,” the most famous of Holocaust stories, and mentioned to the teacher that his parents were survivors. The teacher asked Rose if she would come to the school and share her story.

“I was shaking all over,” Schindler said, “but I did it.”

The students sent her thank-you letters, and in them she sensed an opportunity to make a difference. The students talked about wanting to speak out against hate, guard against something like the Holocaust ever happening again.

“Something shifts in me,” Schindler remembered in “Two Who Survived,” a new memoir. “The story that has been so hard to believe, so hard to tell others, so hard to listen to, has a new value. I never put it behind me, I only set it aside so I could move forward. Now I realized it can change perceptions.”

Additional speaking invitations followed, a handful at first, then more. Teachers told other teachers, rabbis told other rabbis. After her husband retired from General Dynamics, he often joined her, although he was more reserved about sharing what he had experienced (three years in captivity, five different forced-labor camps). He believed in looking ahead, not behind. The epitaph on his gravestone reads “Keep Moving Forward.”

But Rose embraced her new role. She had business cards made up identifying her as Holocaust Survivor & Educator.

Other San Diego survivors were going to schools and churches, too, but Schindler has outlived most of them. So she feels a responsibility to say “yes” whenever an invitation arrives. “Somebody has to do it,” she said.

Kori Street, senior director of programs and operations at the USC Shoah Foundation, a prominent Holocaust archive and education center, said organizations around the country have noticed a steep drop in the number of survivors available to provide first-person accounts.

“There are very few like Rose who have the energy and capacity to do these things,” she said.

Scholars have been talking for decades about what happens, and what it means, when there are no more survivors alive, Street said. It’s one thing to read about Auschwitz. It’s another to have Schindler show you the identification tattoo put on her forearm at the camp — A25893.

“It’s important for students to hear from someone who was there, to know that it really happened,” said Lauren Aven, the Ramona High teacher who arranged Schindler’s visit. “It helps them understand tolerance, why they need to accept everyone no matter their background.”

The Schindlers are among the tens of thousands of survivors who have recorded their stories at the Shoah Foundation and other institutions — recorded them in audio and visual formats that are constantly being updated as the technology evolves from Beta to CD to digital to who-knows-what. In theory, students and others will be able to listen to and watch them forever.

“The time is coming when we are not going to have access to the Rose Schindlers of the world,” Street said. “It’s important to capture their stories in a variety of ways.”

Schindler’s memoir, which came out in July, tells her story, and her husband’s, in alternating chapters. Written by M. Lee Connolly, it’s a story of resilience and hope because of what they went through before they met, and because of the life they made together.

“Two Who Survived” was published by one of the Schindlers’ sons, Ben, a longtime commercial printer in San Diego. He often accompanies his mother on speaking engagements, and not just to play chauffeur and keep her company.

At Ramona High School, he took the stage first and gave a short recap of his mother’s life before she was sent to Auschwitz. Then he handed over the microphone.

Rose told him, “One of these days I’m not going to be around and you can take over my story.” There was laughter in the audience, but she wasn’t joking.

The second and third generations of Holocaust survivors are being groomed to carry on.

At the end of his mother’s talk, as the students were filing out of the auditorium, Ben Schindler spoke their language, using social media lingo: “Hashtag Two Who Survived,” he called out. “Hashtag No Place for Hate.”

Now 62, he’s had to wrestle most of his grown life with what he calls “the great conundrum”: Without Hitler, his parents never meet. Without Hitler, he and his siblings are never born. It raises philosophical questions he has a hard time answering.

He’s had nightmares about the Holocaust, too, even though he wasn’t there — visions of Nazi soldiers knocking on the door and coming to get him. “Must be some kind of DNA memory,” he said, which isn’t as crazy as it might sound. Neuroscientists are studying the phenomenon.

Now that he’s helped put together his parents’ book, he’s well-versed in actual memories, and, since his father’s death, is stepping forward to tell that part of the Schindler story.

He’s aware of recent trends: Fewer young people know anything about the Holocaust. Anti-Semitism is growing. He can’t help but think there’s a connection.

Outside the auditorium, a table was set up for Rose Schindler to autograph books. More than a dozen students stood in line. They walked up, one at a time, and wrote down their names so she could personalize the inscriptions.

Next to her signature, she wrote this: Never give up hope.