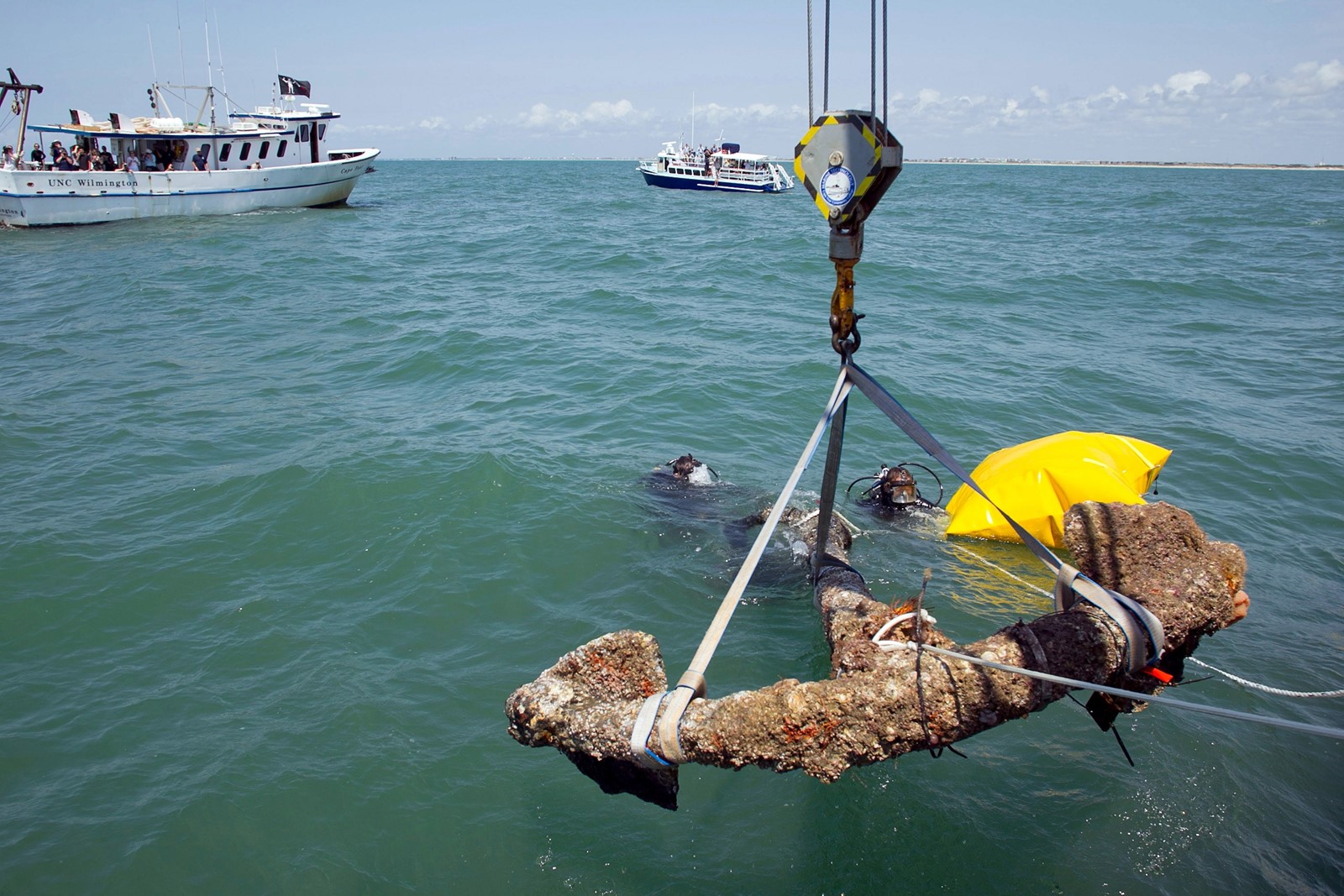 A VIDEOGRAPHER who has filmed the wreckage of Blackbeard’s Queen Anne’s Revenge since it was discovered in 1996 sued North Carolina after it began posting the videos online. Above is the ship’s anchor in 2011. (Robert Willett McClatchy-Tribune)
PREVIOUS IMAGE

More than 300 years ago, Edward Teach, better known as Blackbeard, whose whiskered visage virtually defines the image of the 18th century pirate, ran his flagship aground near Beaufort, N.C.

On Monday, the Supreme Court agreed to hear an appeal involving that ship to resolve a question of alleged 21st century piracy: Can the state of North Carolina be sued for taking someone’s copyrighted work?

At issue in the case, brought by a videographer who has filmed the wreckage of the Queen Anne’s Revenge since it was discovered in 1996, is a broad question of whether authors, musicians, video producers and others may sue a state agency and collect damages if the government makes use of their works without permission.

The high court has created a broad “sovereign immunity” shield that protects states from many types of lawsuits. In this case, the Recording Industry Assn. of America and experts in copyright law are urging the justices to shrink that shield, at least in copyright cases.

Recent rulings have left “states free to infringe copyrights with impunity, with nothing to deter them from that bad behavior,” the recording industry said in its brief supporting the appeal.

“Digital piracy of sound recordings and musical works, including by states, can be quick and easy to accomplish.”

The case began with the discovery of the wreckage of Blackbeard’s flagship, which sank in 1718 and was found by a private research group in 1996.

The discoverers hired Frederick Allen and his Nautilus Productions to film the wreckage and the salvage operation. His videos were copyrighted, but in 2013, North Carolina’s Department of Natural and Cultural Resources began posting the videos online. Allen and the state entered into a settlement that paid Nautilus $15,000, but Allen said the state violated the agreement by converting his works into “public record” materials that were free to all.

Allen sued the state for copyright infringement and won before a federal judge. But the U.S. 4th Circuit Court of Appeals in Virginia ruled last year that the state and its officials were immune from such claims.

In 1990, Congress passed a law to protect copyrights from infringement by state agencies, but a few years later, the Supreme Court handed down a series of rulings that gave states “sovereign immunity” from being sued for damages in federal courts. One of those decisions, Florida Prepaid vs. College Savings Bank in 1999, threw out patent and copyright claims against a Florida agency.

The 4th Circuit cited that decision in blocking the videographer’s suit over Blackbeard’s ship.

His lawyers argued in their appeal that the Constitution gave Congress the power to protect the work of “authors and inventors.” The decision by Congress to enact a federal law allowing the suit to go ahead should override a state’s claim of immunity, they said.

The Supreme Court announced Monday it had voted to hear the case of Allen vs. Cooper in the term that begins in the fall.