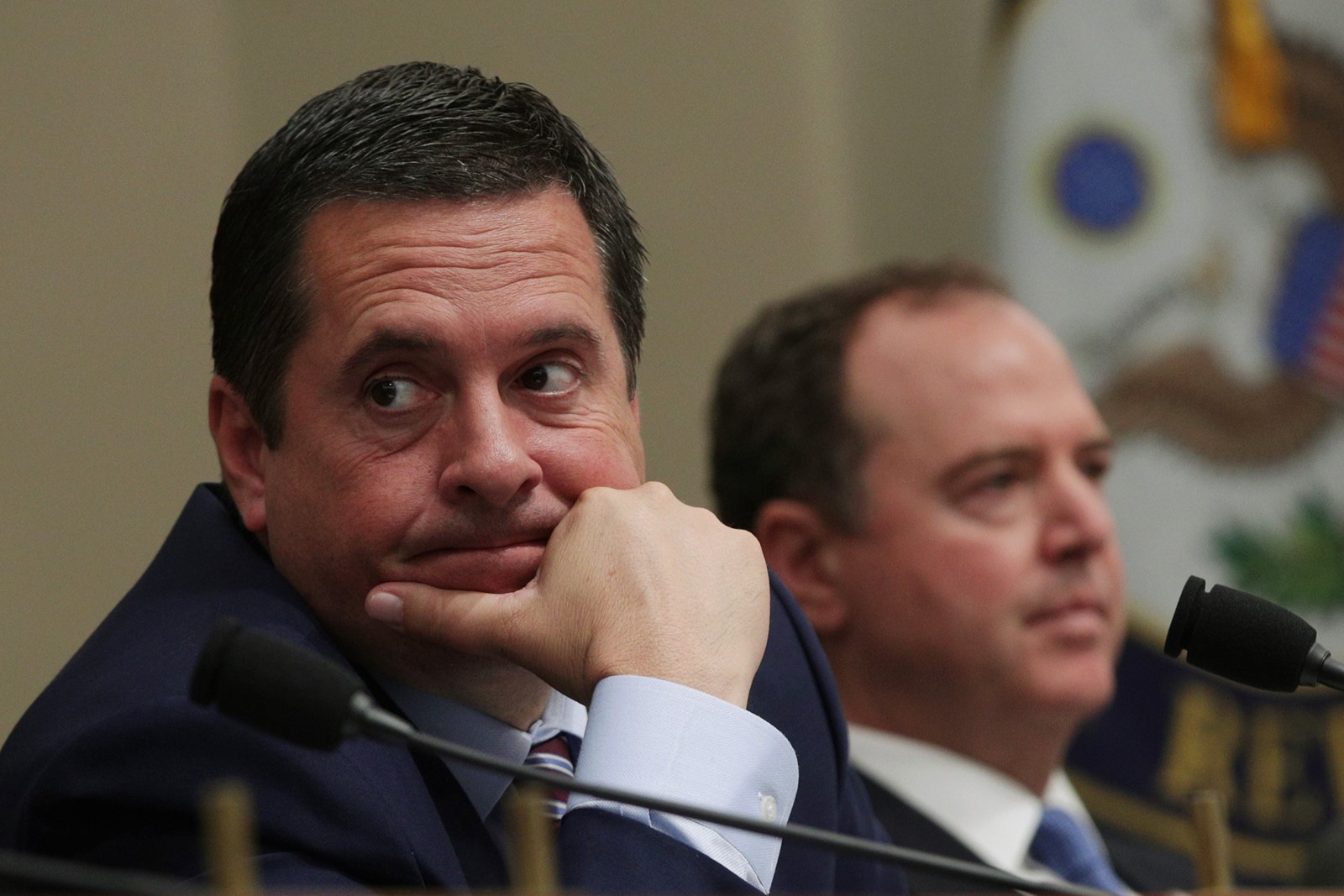 But as Nunes (R-Tulare) faced what would become his toughest-ever reelection last year, Orman was no longer available. In 2016, he ran the successful mayoral campaign of Lee Brand in Fresno and became Brand’s chief of staff. Government rules limited his ability to continue consulting on campaigns.

There’s no evidence that Cloud’s work for Nunes’ campaign violated any laws or regulations. It’s of interest, nonetheless, because of what it says about how a veteran and influential California lawmaker manages his operation. In particular, the hiring illustrates Nunes’ preference for working with a tight circle of people whose loyalty he trusts.

“Devin probably didn’t realize he was going to be the focal point of the national resistance against Trump, and that’s what it became,” said Michael Der Manouel Jr., who co-founded the Lincoln Club of Fresno County with Cloud. But in his close-knit Central Valley district, Nunes has always had an inner circle of people on whom he has relied, he said.

“I think that circle’s actually grown a lot tighter” as Nunes has gained national attention, Der Manouel said. “In his inner circle, it just made people defend him more ferociously.”

The buying and placement of ads is one of the most important parts of a political campaign. Nunes’ decision to entrust that work to Cloud, whose main business is a paper recycling company, struck experts in campaign finance as surprising for several reasons:

Cloud, though a well-known local political activist, has limited professional experience in large-scale ad buys or opposition research. No other federal or local candidate has paid Cloud to do such political work, according to federal and state campaign finance records, although he had a role in some local races and initiatives.

Cloud did the work under the name Paper Sales and Salvage, which appears to have no website and was not registered with the state of California, the city of Fresno or as a fictitious business during the 2018 campaign. Paper Sales was identified in and federal tax and election records as engaging in ad buying only once before since 1992, purchasing $10,640 in ads in 2013 on behalf of a political action committee called Common Sense Information, which Cloud and Orman founded in 2010.

Cloud has been a political contributor to Nunes’ campaign, giving a total of $17,963 to Nunes between 2001 and 2018, including two donations during the 2018 campaign before he started working for the congressman, campaign finance records show.

Nunes did not respond to multiple requests for comment made through his staff.

Cloud’s assumption of Nunes’ ad-buying work turned out to be well-timed. In past campaigns, when Orman did the work, Nunes’ ad buys were never greater than $158,000 and averaged a total of just over $72,000 per cycle. This time, by contrast, Nunes would spend roughly $2.3 million on advertising and opposition research, according to campaign finance records. The campaign did not disclose how much of a commission Cloud received for those ad buys.

Nunes’ sharply higher fundraising in 2018 came about because, as chair of the House Intelligence Committee, he had suddenly gained a national name as a staunch defender of President Trump. The exposure gave him a national profile that allowed him to dramatically scale up. He also drew a well-funded opponent, Andrew Janz, a 34-year-old deputy prosecutor from Fresno.

Cloud’s lack of experience may not have mattered. Nunes ultimately won by just over 5 percentage points in a year when many of his California Republican colleagues were ousted. It was the closest general election of his congressional career.

But University of San Francisco politics professor Ken Goldstein, a national expert on political advertising who led a prominent political consulting firm that specialized in advertising, said that using a relative novice to handle millions of dollars’ worth of ad buys for a congressional campaign was highly unusual.

Ad buys require constant fine-tuning, especially in the final stages of a campaign, Goldstein said, and many buyers use special software to place the orders and rely on years of research about when a target demographic is tuning in.

“I’ve never heard of someone who’s not in the business actually contracting with television,” Goldstein said. “I don’t even know how this guy would know how to negotiate the right rate.”

The relationship between Cloud and Nunes stretches back to at least 2002, when Cloud helped Nunes, then 29, win a seat in Congress. Cloud, who operates a recycled paper products company called Paper Pulp and Film, has been a fixture of conservative politics in the Fresno area since he narrowly lost his own bid for Congress at a similarly young age in 1992, shortly after moving from Orange County to the Central Valley.

Cloud has worked on ballot propositions and local candidates through a group called Common Sense Information. He and Orman founded it together as a political action committee, but Cloud closed the PAC in 2015 after launching a nonprofit group in 2013 that does business under the same name.

Leadership PACs such as New PAC are often used to raise money that a member of Congress can then contribute to other politicians or use to pay for events to raise the member’s profile. According to FEC reports, the money given to Common Sense Information is the only contribution New PAC has made to a nonprofit corporation since it was created in 2004.

After Orman took a $148,000-a-year job as Mayor Brand’s chief of staff, his previous clients, including then-Rep. David Valadao (R-Hanford), went searching for new ad buyers. Valadao, who like Nunes had relied on Orman for years, turned to a national firm. Other Fresno-area Republicans turned to Mark Scozzari, who had worked on campaigns with Orman in the past, according to local strategists from both parties.

Orman said he and Nunes didn’t talk about whom the congressman should rely on in his stead and said he had “no clue” how Nunes ended up choosing Cloud.

He said he also didn’t help Cloud navigate ad buying during the campaign, although “I gave him some tips, absolutely.”

The sheer amount of money that both sides and outside groups spent in the 2018 election made tactical judgments about where to place ads less important, said Der Manouel. That negated any effect of losing Orman’s expertise, he said.

Nunes raised $12.7 million in 2018 and spent $11.6 million. Of that, $2.3 million went for ad buys and opposition research handled by Cloud, according to campaign finance reports.

The rest went to staff salaries and other campaign activities, including printing mailers and digital ads, all purchased through vendors with a long-standing history of working on political campaigns. Though Nunes gave $150,000 to the National Republican Congressional Committee, his campaign didn’t give directly to fellow Republican candidates. Two of Nunes’ closest allies in the House, and in the Central Valley, lost to Democrats in tight races.

According to Nunes’ campaign finance reports, most of the $2.3 million spent with Cloud was earmarked for radio and television buys, with $73,430 going to opposition research late in the campaign.

A review of hundreds of political ad contracts filed with the Federal Communications Commission showed Cloud blanketed the airwaves in the final months of the campaign. Early in the summer, ads focused on Nunes’ fight against the Fresno Bee. In the final months, they focused on his work in Congress to increase water flows into the Central Valley or on his opponent’s alleged ties to out-of-district donors and radical ideas.

How much Cloud received in commission for the ad buys is undisclosed. FCC records show that the difference between how much Cloud was given to spend and the total cost of the media buys was about $324,000. But that amount reflects an automatic commission rate that TV and radio stations across the country assume and remit to ad buyers. It is rarely the actual amount an ad buyer gets to pocket, Goldstein said.

Normally an ad buyer, particularly when handling large deals, accepts a lower commission with a campaign and uses the rest of the 15% automatically remitted by stations to create ads or do research on when to run ads, he said.

The new Nunes-Cloud partnership appears to have suited both: Cloud registered a new political consulting company, River Right Inc., with the state this year.

Even before he drew a 2020 opponent in late May, Nunes’ congressional campaign had paid Cloud’s new company $33,500 for polling and fundraising in the first three months of the year, campaign finance records show. Nunes’ leadership committee paid Cloud $31,500 for fundraising in the same time period.