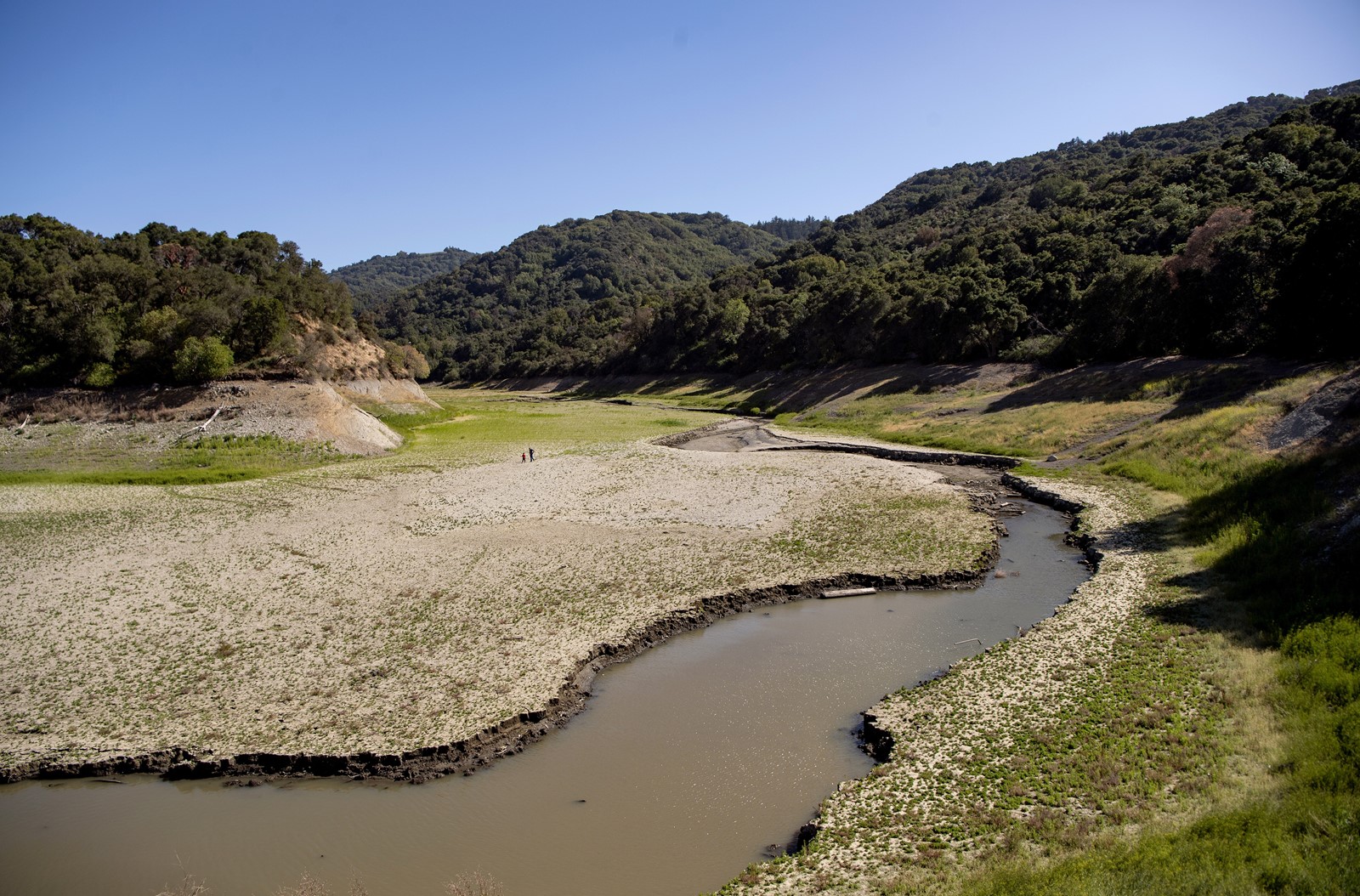 SOME OF the water basins in Santa Clara County are running low, including the Stevens Creek Reservoir, which had fallen to 18% of its capacity by May. (Josh Edelson Associated Press)
PREVIOUS IMAGE

California is known for its history of natural disasters, and in the Silicon Valley, two potential calamities — drought and earthquake risk — are converging to dry up water supplies in the hub of the state’s tech economy.

In a meeting on Wednesday, board members of the Santa Clara Valley Water District voted unanimously to declare a water shortage emergency — in part because a key county reservoir had to been drained to reduce earthquake risks highlighted by federal regulators.

County officials warned last year that the draining of Anderson Reservoir would put the region in a perilous position, but they were forced to drain the lake anyway, since the reservoir and dam sit atop the Calaveras fault, which could trigger a high-magnitude earthquake.

To preserve supplies, the district is calling for a mandatory 33% reduction in water use from the levels seen in 2013 and is planning to rely almost entirely on groundwater, said Tony Estremera, the valley water district’s board chair.

But if too much groundwater is tapped, the ground is likely to sink, he said, challenging the structural integrity of roads, bridges and buildings.

“That’s really not acceptable in a place where we have some of the largest companies in the world,” said Estremera, referring to Apple and Google, which have campuses in Silicon Valley.

To prevent land from subsiding, the water district wants local governments to implement restrictions, including reducing lawn watering to three days a week, banning the filling of swimming pools and ending the use of potable water for washing buildings.

That will hurt some homeowners and businesses, but David Gurrola, a landscaper in East Palo Alto, said it could help his. He expects some clients will begin pulling out turf and replacing it with cactuses, succulents, bark and gravel, and adding high-efficiency drip irrigation systems.

“That’s what they did during the last drought,” said the owner of E&D Landscaping, referring to the dry years between 2012 and 2016. “No reason to give up on your yard or garden.”

While Southern California has so far avoided emergency drought restrictions, Santa Clara County — which includes San Jose, the state’s third-largest city — is scrambling, and the rest of the Bay Area is not far behind.

The U.S. Drought Monitor reported Thursday that four of the six San Francisco Bay Area counties had moved into “exceptional” drought — the most dire drought categorization, reflecting the potential for widespread crop and pasture loss, as well as the potential for water emergencies.

The dry conditions are the result of two years of low precipitation and abnormally high temperatures across the region, including in wine country and Marin County, which declared a drought emergency in May. While San Francisco and the East Bay manage reservoirs in the high Sierra that can help them get through the summer, they can’t bank on those supplies if coming winters are similarly parched.

Water experts note that the Bay Area has experience with water shortfalls, which will help it adapt to the current challenge.

Jonas Minton, senior water policy advisor for the Planning and Conservation League, agreed, noting that only two of the six counties have mandated restrictions.

Yet both Hanak and Minton said water managers must confront changes that have left the state with more precipitation in the form of rain instead of snow. In addition, rising temperatures are evaporating much of that remaining snowfall and runoff, leaving less for reservoirs downstream.

“California has relied upon a water storage system that is quickly disappearing,” Hanak said. “That’s snowpack.”

Unlike Southern California, the Bay Area doesn’t have a dominant water agency that delivers supplies across multiple counties. The Santa Clara Valley Water District serves 15 cities and about 2 million residents, relying on a “robust water portfolio” of reservoirs, groundwater supplies and contracts with state and federal water projects, said Minton, former deputy director of the state’s Department of Water Resources.

Starting last year, however, the district lost a big part of that portfolio.

In February 2020, the Federal Energy Regulatory Commission ordered an immediate seismic retrofitting of the dam, which was constructed in 1950 on sand and gravel, making it vulnerable to large temblors. If the dam were to collapse in an earthquake, scientists say, floodwaters could destroy parts of the city of Morgan Hill and even San Jose downstream.

That has forced the district to drain its largest reservoir, which holds slightly more than 91,000 acre-feet of water when full, and undertake a reconstruction program that is likely to last until at least 2034, Estremera said.

Some of the district’s other water basins are also low, including the Stevens Creek Reservoir, which had fallen to 18% of capacity by May.

Adding to the pain, the federal government in May announced that it was reducing urban water allotments from the Central Valley Project by half. Roughly a quarter of the Santa Clara Valley Water District’s supply comes from the federal water project, which is fed largely by runoff from the Sierra snowpack. As of April 1, that snowpack was 59% of normal.

Estremera said the district is investing heavily in water recycling and conservation, as well as planning new reservoirs — such as the proposed $2.5-billion Pacheco Reservoir, which would hold 140,000 acre-feet of water, surpassing by half the volume of Anderson Reservoir. While San Jose Mayor Sam Liccardo announced his opposition to the reservoir, saying it was too expensive, Estremera said the region needs every option.

“You can’t create more water,” he said. “You need to conserve, preserve and recycle.”

Lessons learned from the 2012-16 drought should also help the region get through the current emergency, said Adrian Covent, vice president of public policy for the Bay Area Council, a regional industry group.

“At that time, businesses started doing things like changing out turf in favor of drought-resistant plants and upgrading water efficiency,” he said, calling the Bay Area “the most water-efficient region in California.”

His group’s biggest concern is Marin County — the only other Bay Area county to impose water restrictions.

Unlike other counties, Marin is 75% dependent on supplies from local watersheds, which haven’t been adequately replenished in more than two years, and 25% from the Sonoma County Water Agency, which Gov. Gavin Newsom in April declared was in a drought emergency.

“The lack of drought-resilient supplies could cause a moratorium on new connections and housing construction,” he said, noting the Bay Area’s housing shortage and need for new, affordable housing.

State water planners and engineers will need to design and construct new infrastructure to adapt to climate change, while also preparing for the unpredictable, Hanak said.

“California is a state of extremes,” Hanak said. “We’re never going to make these problems go away. What we need to do is find strategies for resilience and realize that no one size fits all.”