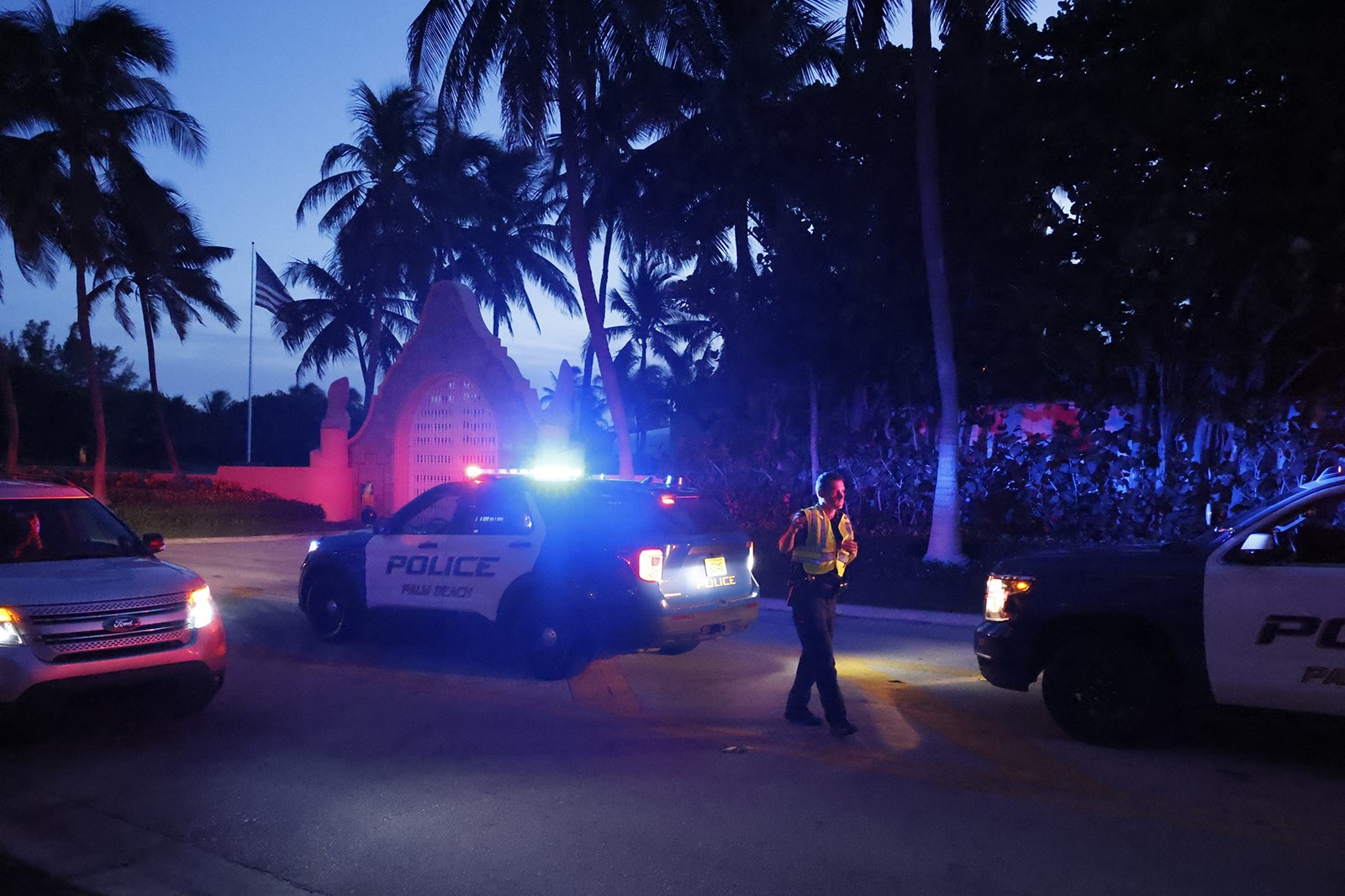 POLICE outside former President Trump’s home in Palm Beach, Fla., on Aug. 8, the day it was searched by FBI agents. Republican lawmakers have called for the release of an affidavit used to obtain a search warrant. (Terry Renna Associated Press)
PREVIOUS IMAGE

The Justice Department said Monday it opposes the release of an FBI affidavit justifying a search warrant used to remove documents from former President Trump’s home in Florida last week.

Though the department asked a federal court to release the search warrant last week, it said in a filing that the affidavit “presents a very different set of considerations.”

“There remain compelling reasons, including to protect the integrity of an ongoing law enforcement investigation that implicates national security, that support keeping the affidavit sealed,” according to the filing in federal court in West Palm Beach, Fla.

The Justice Department also said the affidavit — typically a road map of an investigation — includes “highly sensitive information about witnesses, including witnesses interviewed by the government.”

The department was responding to a request filed by the conservative group Judicial Watch and some media organizations seeking the release of all materials related to the unprecedented search of a former president’s residence, which resulted in the seizure of 11 sets of classified documents.

In the week since the search on Trump’s property, some Republican lawmakers have called for the release of the document and Senate Intelligence Committee leaders made a bipartisan request over the weekend to the government for members to privately access the classified documents.

Last week, a Florida judge released the search warrant and a list of materials seized during the search after a request from the Justice Department that Trump didn’t oppose. But the underlying affidavit would reveal the most extensive information used to justify the action, possibly including sources used by FBI agents and details about the documents and classified information.

Releasing an affidavit at this stage of an investigation would be highly unusual and require the approval of a federal judge. Unlike the warrant itself and the seizure receipt, which the FBI gave to Trump’s lawyer during the search and Trump was free to share, the former president wouldn’t have seen a copy of that document.

“There is simply no alternative to sealing that could ensure the integrity of the government’s investigation and that would prevent the inevitable efforts to read between the lines and discern the identities of certain individuals, dates or other critical, case-specific information,” the Justice Department said in the filing.

It isn’t possible to make a redacted version of the affidavit public because the redactions would be “so extensive as to render the document devoid of content that would meaningfully enhance the public’s understanding of these events,” the department said.

The FBI’s seizure of classified material from Trump has thrown U.S. politics into turmoil, and court filings revealed the former president may be under investigation for mishandling government records and potentially compromising national security information.

The list of information seized during the search includes documents that bore the U.S. government’s highest top-secret rating, and prosecutors indicated they are exploring possible violations of the federal Espionage Act among other allegations. The FBI seized “TS/SCI documents,” which stands for top-secret and sensitive compartmented information, a government label for material gathered through sensitive intelligence sources or methods.